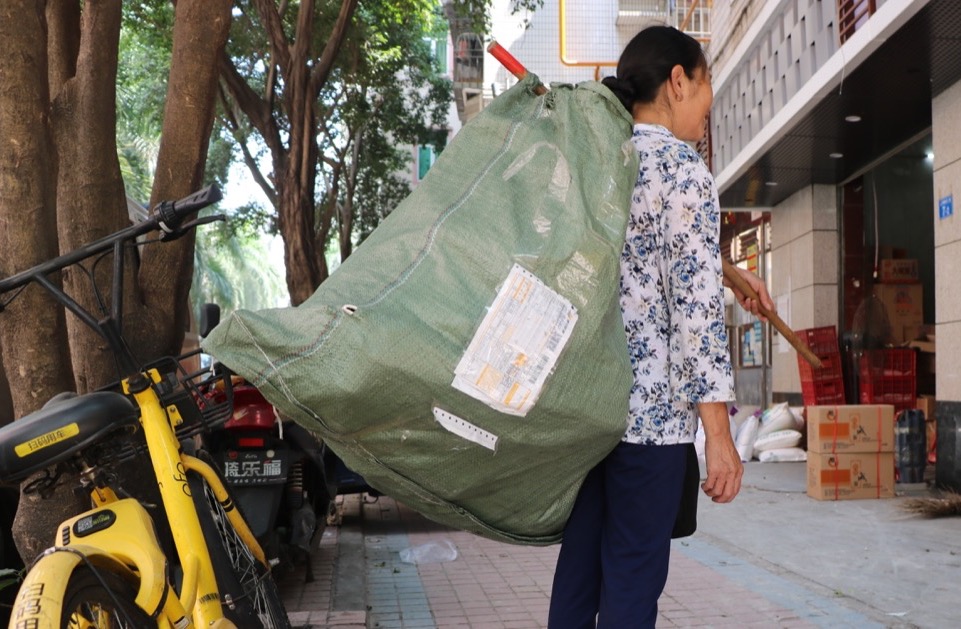 They lurk in the background of certain neighborhoods and gated communities. Quietly, unobtrusively, they root through dirt-encrusted dumpsters and bulging plastic bags, picking out bottles or boxes and leaving the rest.

Like old-timey nomads, many carry their precious cargo on poles balanced over one shoulder, using cheap sacks of almost comic proportions.

Also like nomads, they’re elusive. One, an elderly white-haired woman in lavender pajamas, tells us she’s simply “on a walk,” picking up any recyclables that catch her eye. She’s in her “70s or 80s,” she says, and living with her family.

When we ask how much she can make from her small cache of plastic and cardboard detritus, she replies that she’s “not sure.” Before we can ask another question she meanders off, most likely in search of another dumpster.

Fang Chunxiu, a Hunan migrant who’s lived in Shenzhen for a year, is more forthcoming. She collects aluminum cans, cardboard and water bottles, selling them for about RMB7-10 per load.

Collecting recyclables is only a side gig for Fang. At night she washes dishes at a restaurant, earning RMB3,200 per month. Life is better here than back home, she says, where she earned around RMB1,000.

Now, not only does she command a higher salary but also a way to supplement it, although she has yet to tell her son about her second line of work.

During daylight hours on her days off (usually Mondays and Tuesdays) Fang wanders through Shangsha, in Futian District, looking for items she can collect and sell. Why Shangsha? Because, unlike some places, “the sanitation workers won’t curse at you” when you pick up garbage.

Fang’s findings are either dug out of dumpsters (“if it’s not clean, I won’t pick it up”) or scavenged off the street. Her partially-filled bag, over half the height of her diminutive form, “isn’t heavy,” she tells us. Some days she doesn’t even fill it up, depending on her luck.

Fang is only part of the picture, one segment of China’s massive recycling ecosystem. A step up from the scavengers are the middlemen, who collect and transport large amounts of plastics and cardboard to plants where they’re processed and reshaped. 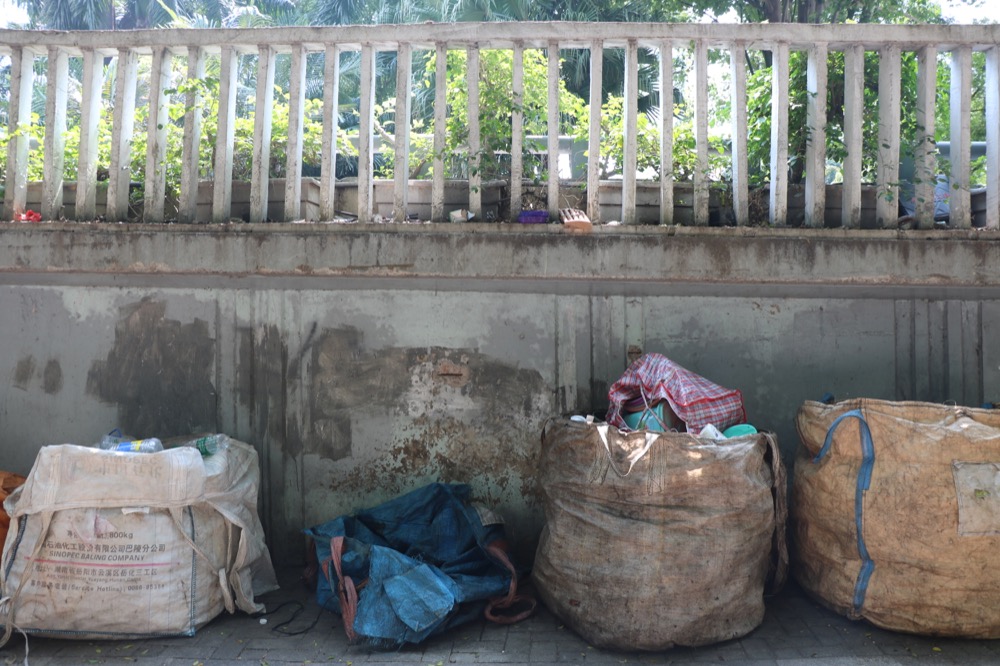 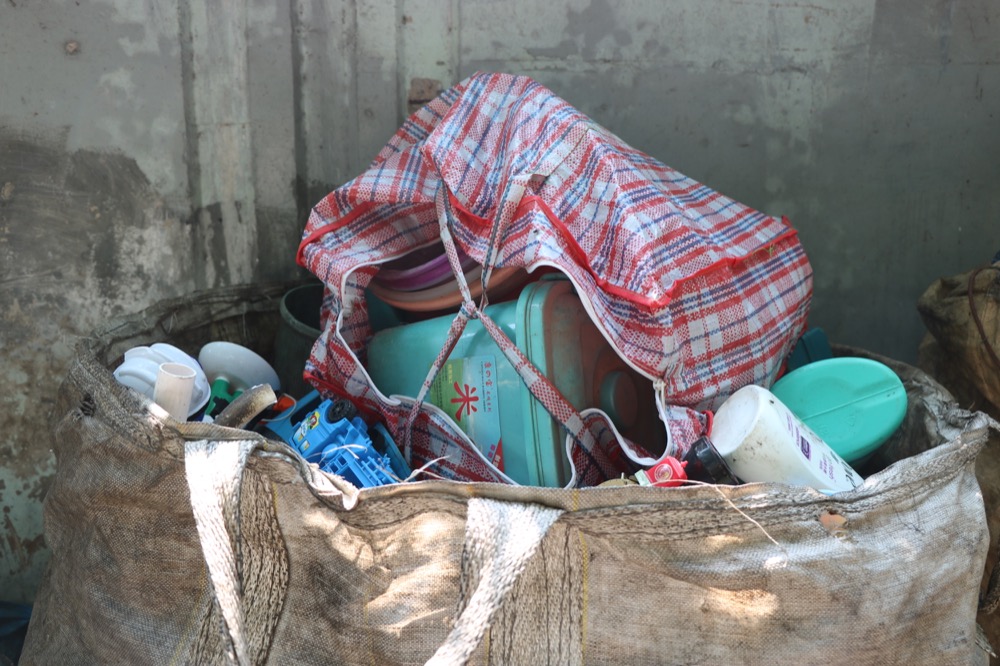 The ones Fang sells to happen to be camped out by a nearby overpass. Their apparatus is spare, ready to be moved at short notice: two medium-size cargo trucks, scales and several massive bags full of sorted recyclables.

When we visit in the early afternoon, one truck is already half-full from the morning’s pickings. Two of the business owners sit in the shade, while another sweeps up debris from the street. Chengguan come by this corner every once in a while, one worker tells us, so it needs to look tidy.

The trio is from Anhui province and have only been in Shenzhen for the last six months, he says. Around about 40 to 50 scavengers frequent their stop each day, out of an estimated 10,000 trash pickers citywide.

“If there was no one picking up [trash], society would be a mess.”

He has a point. Despite much-touted recycling regulations and fines, actual bins have yet to materialize in areas like Shangsha. And even when trash sorting takes place, not all recyclables make it into the can.

Scavenging is doubly useful – not only are reusable items salvaged from incineration, but streets and sidewalks are left a little cleaner.

Despite benefiting society, though, their jobs are “the most bitter work.” For about RMB5,000-6,000 each monthly, the three spend 16 or 17 hours a day collecting and delivering trash, and sleep in their trucks at night.

For those with “no culture” and few opportunities, however, it’s “a way to survive.”

With additional research by Evelyn Wang. 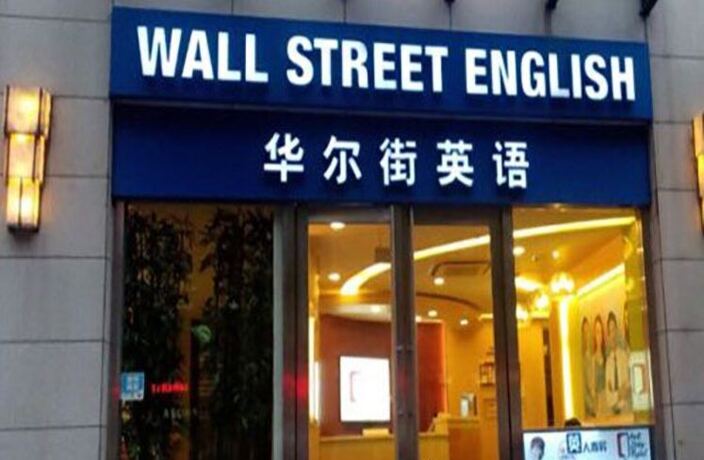