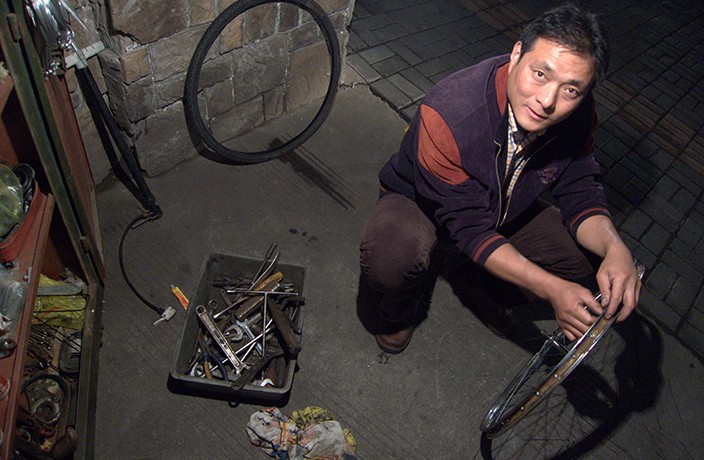 In downtown Shanghai it’s getting tougher to spot street-side bike repairmen. The switch to electric bikes and scooters, coupled with the pretty price of city living, makes it tough for guys that only work on bicycles.

Many repairmen, if not most, have expanded their business to electric bikes. Others have moved away from the city center, into areas like Zhabei and Minghang, where more people still use non-motorized bikes as their primary transportation. While a numbered few, like 49-year-old Niu Yue Gang, are clinging to their trade and their location, for the time being.

“In three years, you won’t see bike repairman on these streets anymore,” says Niu, stretched out in a recliner near his repair spot. 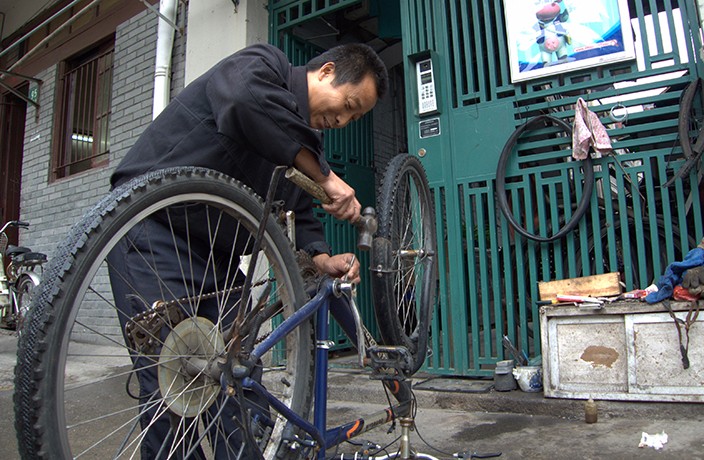 Niu’s business is on the same quiet block of Changping Lu as the tiny home (8.7 square meters) where he lives with his wife and two teenage kids.

Niu’s parents were relocated to Anhui shortly after his birth. He returned to Shanghai when he was 28. After losing a job in Xinzhalu Food Factory in 1997, Niu began repairing bicycles. He makes about RMB1,000 per month. His wife took a cleaning job to help support their family, too.

“Everyone calls me ‘A san’ because I am the third boy of the family.” Most customers are neighbors. If he isn’t at his work station, people will yell “A San!” outside his home when they need him.

“I don’t like rain, there aren’t any customers when it rains.”

When it’s sunny, Niu mends two or three flat tires per day. He charges RMB2 for the service. He bikes 45 minutes to buy tires from a wholesaler, and adds RMB2 to the price for customers who need a replacement.

“People will usually toss some change into the box next to my inflation pump when I’m done filling up their tires. It’s not mandatory, but I always find lots of half-cent coins in the box, sometimes one cent!” Niu says sarcastically. “Nobody is riding bikes here anymore! The business is getting worse every year.”

Thirty-nine-year-old, Anhui-native Kuai Xue Ming rides an electric bike, but has been repairing bicycles in Shanghai for 12 years. He makes about RMB2,000 per month.

Kuai misses the good old days: Streets were narrower, buildings were smaller and he was making a lot more money.

“I have a son and a daughter; I want them to go to school in Shanghai. It’s much better here.”

When there’s no work at his station on Huashan Lu (near Xingguo Lu), Kuai sits on a lounge chair and reads about electric bike maintenance. He’s frequently interrupted by neighbors passing by and waving hello. But Kuai doesn’t have the luxury of wasting time, he needs to learn a new skill. His two kids’ education cost RMB4,000 last year, and it’s only set to increase as they age.

Half of Kuai’s income comes from RMB3 flat tires mendings. The other half is RMB1 pumping fees and a 40 percent mark up on replacement parts.