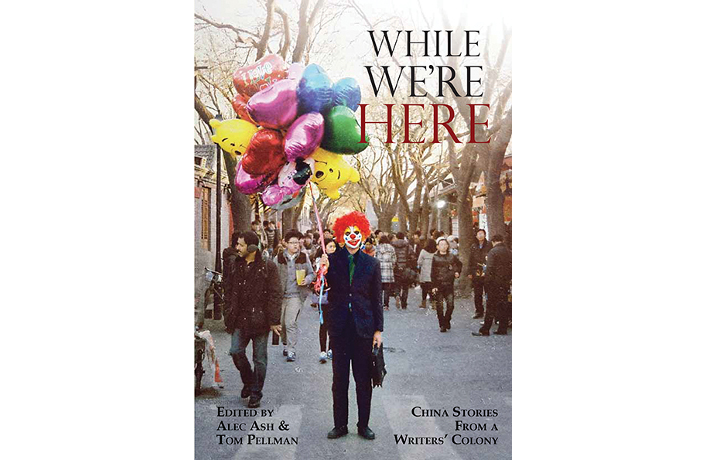 In a sense, writing an in-depth review of While We’re Here is superfluous. All of the short works in this anthology are distinct from one another and available in full online at The Anthill – the self-described “writers’ colony” from which they were selected. It’s like Amazon’s ‘Look Inside’ function on steroids.

But even if you have read some of these 33 works of fiction, non-fiction and poetry already, let this not dissuade you from buying a physical copy. I make this case on moral grounds – all proceeds will help The Library Project provide books to orphanages and primary schools in rural Asia – but also because the type of personal, narrative-driven writing that The Anthill is known for deserves to be on your bookshelf.

It is rare that a book on China (in English, at least) is published for the enjoyment of those of us actually living here. These are stories that, according to the book’s Co-Editor Alec Ash, “would otherwise go untold” for precisely this reason. While some of the entries could, and should, appeal to wider audiences, While We’re Here does not pander to them. You can read oft-used acronyms without explanation, and see the word ‘Weibo’ without it being followed by ‘China’s version of Twitter.’

This familiarity is what appeals the most. In Jonathan Rechtman’s ‘Model Worker,’ the author’s brief encounter with Chengdu’s Western Modeling Agency will instigate a knowing smile from those foreigners who have been afforded surreal opportunities by virtue of their ethnicity. And in Sam Duncan’s humorous account of his time in Heilongjiang (‘Ayi and I’), his landlord’s assertion that “the TV would work fine as soon as the housing contract was signed,” resonates not only because it’s funny, but because I know that landlord. He’s every landlord I’ve ever had (or every agent, at least).

Some of the anthology’s best entries come from characters not primarily known for writing, such as Great Leap Brewing’s founder Carl Setzer, who recalls paying his last respects to father-in-law. His story is a reminder that While We’re Here is – like The Anthill itself – at its most captivating when confronting the personal. Among the best of the other memoir-style contributions is ‘Examining the Past’ by That’s Beijing’s former Senior Editor Karoline Kan – a heartbreaking tale of how family pressure and the suspension of the gaokao during the Cultural Revolution denied her father the chance to pursue his dreams at university.

Our affection for this collection has nothing to do with the appearance of That’s Beijing contributors – past and present – in its pages. But while we’re on the subject: former Editor-in-Chief Robert Foyle Hunwick offers a fantastically entertaining account from inside one of Beijing’s last remaining bathhouses (‘Shower Business’); author of our monthly Chinese Urban Dictionary column, Mia Li, regales us with her dad’s request for a VPN for Fathers’ Day; and former columnist Carlos Ottery (aka Beta Dad) provides a standout dose of flash fiction introducing his character Leroy, the tragic laowai we know all too well (“Back home in Norwich, there was no way he could be doing this sort of stuff, which, come to think of it, was probably why he had left… Beijing was his home now, and in Beijing he felt he was kind of a big deal”).

But far from being a Twitterati circle jerk, this is a collection of personal stories from China that will make you wish that you’d kept a diary all this time. While We’re Here is a book that was made for us – while we’re here, at least.

While We’re Here is published by Earnshaw Books and is available in Beijing at The Bookworm or by emailing orders@earnshawbooks.com. The book is also available on Kindle through Amazon.