As Chinese stocks continue to take the country's 90 million investors on a rollercoaster of a summer, Beijing has tried all manner of ways to stabilize the market and restore confidence, from banning trading to buying shares and investigating mass sell-offs. They’ve even rolled out that trusty government tactic – invoking patriotism. 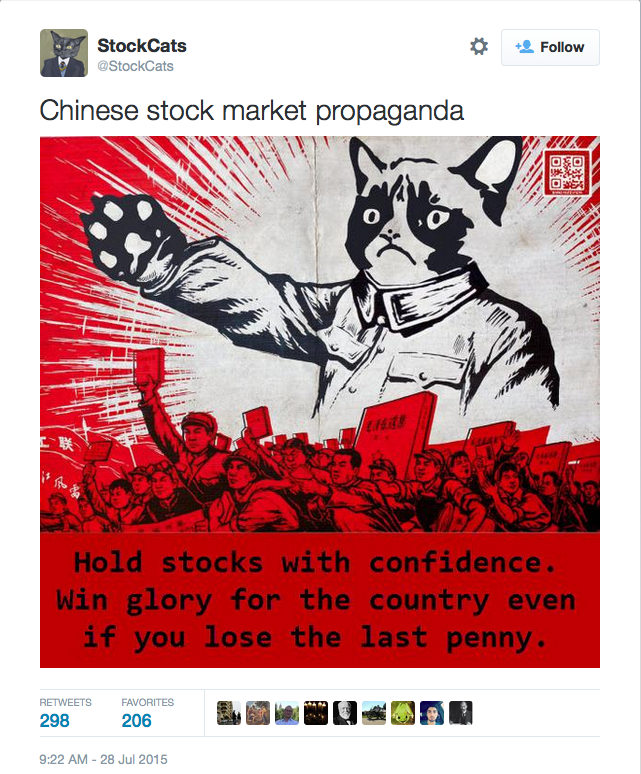 While the above propaganda poster is, of course, a parody from Twitter user StockCats, the quote is real – from Weibo executive Fan Shaoxuan.

After the Shanghai Composite Index on Monday plummeted 8.5 percent –  the single biggest one-day fall since 2007 – yet more commentaries blaming “foreign forces” for the tumble rolled off the presses. 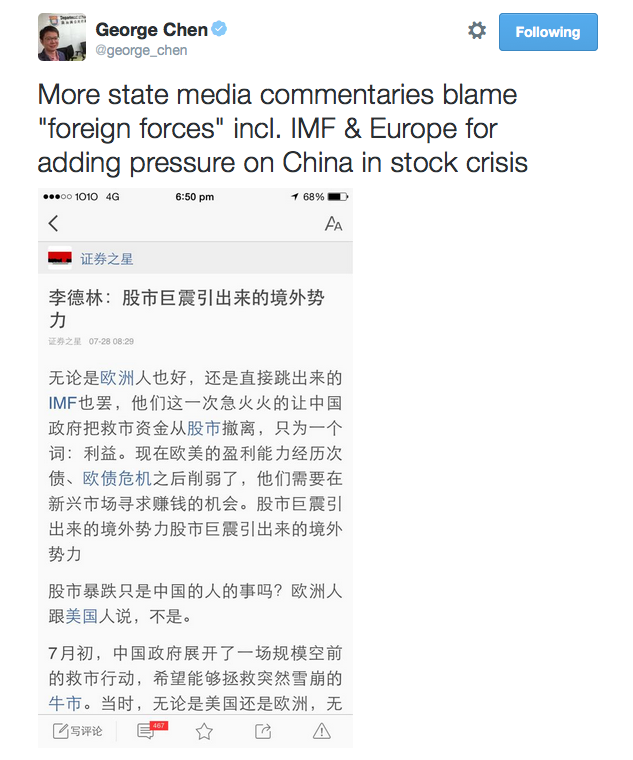 In a notable example of the genre, Niu Wenxin, the executive editor of CCTV’s finance channel, declared that foreign forces were “undoubtedly” behind China’s stock market plunge.

Chinese netizens, however, were not buying it.

“You guys started out saying it was foreign forces, then you said it wasn’t, now you’re saying it again ad nauseam, what about public trust?” read the top comment on NetEase.

“Don’t treat Chinese investors like idiots – the real economy has been continuously slipping, and all the while the stock market had been rapidly going up. What does this mean? It’s no longer investment, it’s speculation. Most people understand this.”

A searing response from Sichuan that received 11,329 upvotes read:

“Once again inventing an enemy. Even when you’re constipated it’s America’s fault.”

But perhaps the best rebuttal of all came from an Internet user in Suzhou:

“There are three countries in the world that are very important to the Celestial Empire [China] –  1) North Korea: when the Chinese feel that life is barely worth living, they can look to North Korea to find their sense of superiority; 2) Japan: when domestic conflicts can’t be harmonized, one mention of the Diaoyu Islands is enough to divert attention from the issue; 3) the US: all bad things can be blamed on America, every unfavorable element is a futile American plot to destroy China.” Netizens voice support for man who kicked woman‘s face in.