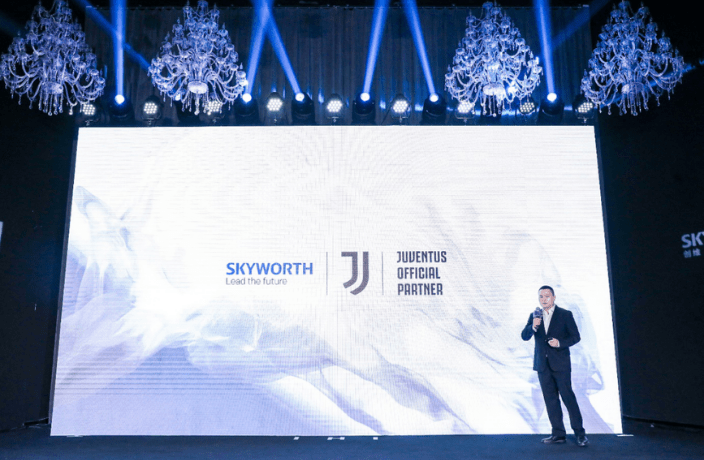 On June 8, 2021 in Beijing, China, SKYWORTH, a leading global television brand, announced a new brand partnership with Juventus, the world-leading Italian Serie A football club. In line with the theme of “Partner Together, Lead the Future,” SKYWORTH and Juventus will roll out multiple activities to celebrate their upcoming football matches with global fans. The club recorded exclusive video messages for the partnership, featuring David Trézéguet, a legendary Juventus player and one of the highest goal scorers in the club's history, as well as Juventus first team players Federico Chiesa, Leonardo Bonucci, Dejan Kulusevski and Matthijs de Ligt.

The partnership of this scale is a first for SKYWORTH, fueling the brand’s ambition to expand its global footprint. SKYWORTH has continued to see consistent growth in the international arena and at present, has 10 global R&D centers, three of which are based in Europe, and nine manufacturing sites worldwide, with continued plans for expansion on the horizon. The partnership will enable SKYWORTH to bring its suite of leading immersive entertainment experiences to a global stadium.

Leo Tang, Chief Brand Officer of SKYWORTH TV, said: “SKYWORTH believes in the importance of togetherness and we have been championing that through delivering top-quality TV experiences. Football is a sport that brings players and fans from around the world together. We are excited to support Juventus right now, as football recovers from the pandemic. This partnership also represents a major milestone for SKYWORTH in our global business expansion plans, and we are excited to establish a new era of entertainment and connect with audiences who share the same passion for entertainment and sports as we do.”

Partner together to explore possibilities and lead the future

The perfect collaboration stems from the all-round fit between the two brands. As leading players in their respective fields, SKYWORTH, with the brand spirit of “Be Innovative, Be Bold” and Juventus, with the faith of “Perseverance Forever, Ambition Wherever,” were both founded in the commitment to break the boundaries, achieve greatness and lead the future. The partnership will propel SKYWORTH and Juventus to move ahead, explore possibilities and reach new heights.

Federico Palomba, managing director of Juventus APAC, said: “We are thrilled to welcome SKYWORTH as a Juventus official partner. Together with SKYWORTH, we cannot wait to bring more of the action to fans across the globe and create meaningful experiences that will enable fans to feel and share the excitement with us.”

Win a once-in-a-lifetime experience with Juventus

The brand partnership will launch from june 8 until the end of Lega Serie A 2022. It will see a range of co-branded content launched across global platforms and during Juventus home matches. To celebrate, four lucky SKYWORTH fans will have an opportunity to win a VIP ticket for a Juventus match tour, offering the winners a once-in-a-lifetime experience on a match day together with this legendary club. SKYWORTH will also introduce a raft of exclusive deals and special offers. More details will be unveiled on the SKYWORTH Facebook, Twitter, Weibo and WeChat official channels. Stay tuned and join us for special adventures and giveaways.