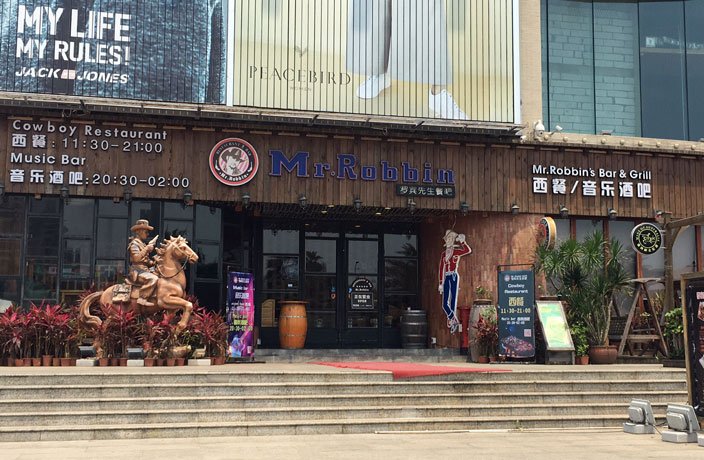 Out in the Wild West of Guangdong, the coastal city of Zhanjiang is home to an all-too-familiar sight. On a recent visit to the city, we came across a cowboy-themed restaurant and bar that is the spitting image of Mr. Rocky, a restaurant chain you’ve more than likely visited during your tenure in Guangzhou or Shenzhen.

This restaurant, though, is called Mr. Robbin. 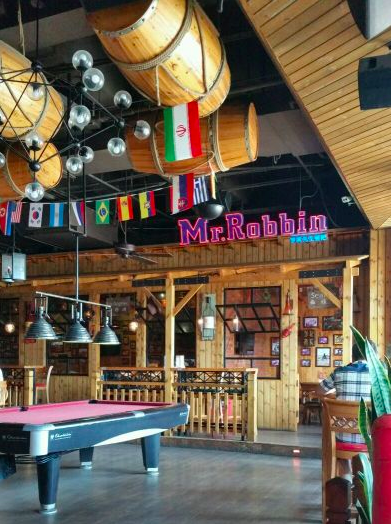 While we didn’t have the chance to pop inside the western-themed music bar and grill, a quick search online revealed that the restaurant is practically a clone of the Canton haunt. For starters, pictures taken by people who’ve reviewed Mr. Robbin on Dianping show that the interior design and layout of the restaurant is suspiciously similar to Mr. Rocky, with a music stage, wood-paneled walls and wagon wheels hanging from the ceiling. 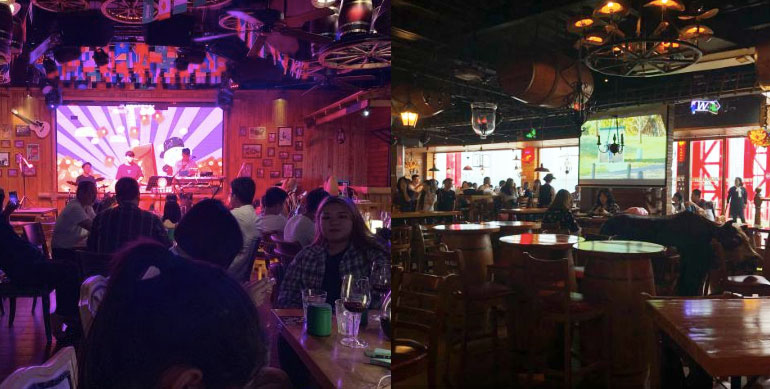 Wagon wheels are seen hanging from the ceiling at Mr. Robbin (left) and Mr. Rocky (right). Images via Dianping

The logos of the two brands are also very, very similar. Both are circular, use a near-identical font and are colored red, white and blue. The only major difference is the cowboy on the Mr. Robbin’s logo is notably younger than the older man featured on Mr. Rocky’s brand material.

A quick look at their food selections also shows similar gastronomic options, such as sausages, steaks and pizzas, are available at both restaurants.

We called the Zhanjiang-based cowboy bar in the hopes of speaking to Mr. Robbin himself. Instead, we ended up chatting with one of the restaurant’s staff members about this ‘coincidence.’

“I’ve never heard of Mr. Rocky,” the employee told us when we asked if they were in any way related to the Guangzhou-based restaurant chain. She also said that Mr. Robbin has been there for “several years,” but declined to elaborate or comment further.

Five minutes later, we called the ‘Cowboys of Canton.’

“They’ve been open for three years,” a manager from one of Mr. Rocky’s Guangzhou locations told us when we brought up the Zhanjiang parlor. Aside from confirming with us that the restaurant in Zhanjiang was not branding themselves as a Mr. Rocky’s location, she didn’t sound overly concerned by the matter, telling us this kind of thing happens all the time.

This isn’t the first time a popular Guangzhou-based chain has been replicated. Several years ago, popular restaurant chain The Happy Monk had an unauthorized clone pop up outside of Guangdong, in a nearby Chinese province. American Pie Pizza, based out of Panyu, also fell victim to an unauthorized copy back in 2015 or 2016.