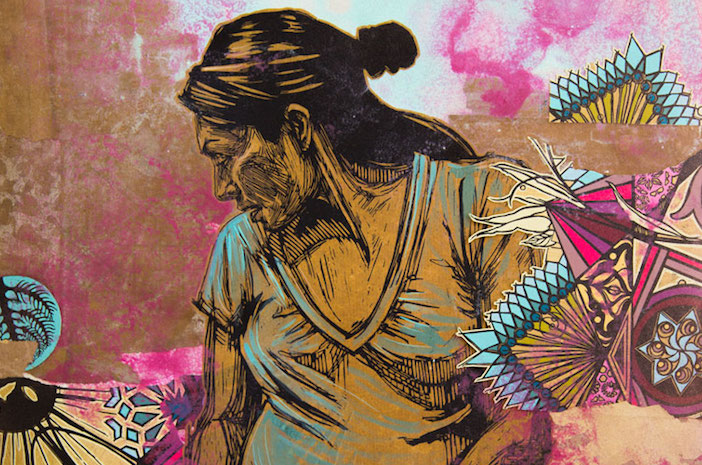 One of the leading visual artists now working out of Brooklyn, Swoon got her start doing graffiti in the late 90s. As one of the only women in the scene alongside now-famous names like Banksy, JR and Shepard Fairey, she began developing her now iconic style of portraiture, which she creates in advance in her studio and then brings out to the street, using wheatpaste to transfer it onto a wall.

Though her Asia debut at Magda Danysz Gallery focuses on her portraiture and street art, Swoon has also become known for her site-specific artwork, especially a 2014 work, Submerged Motherlands, in which she transformed the Brooklyn Museum into a sort of rainforest made of paper, complete with a giant tree and sculpted rafts that guests could ride in.

Swoon’s Shanghai exhibit reveals that street art can be about much more than defiant tagging, showing another level of complexity and emotional resonance in graffiti. Overlaid with fluid pastel colors and geometric shapes, her portrait subjects are drawn with empathy, dignity and vibrant detail, from the liveliness of the eyes to the uncanny natural posture as they gaze back, eye to eye, with the viewer.

We spoke with Swoon recently to learn more about her take on street art, activism, and reinterpreting genius as female. Read on for the interview. 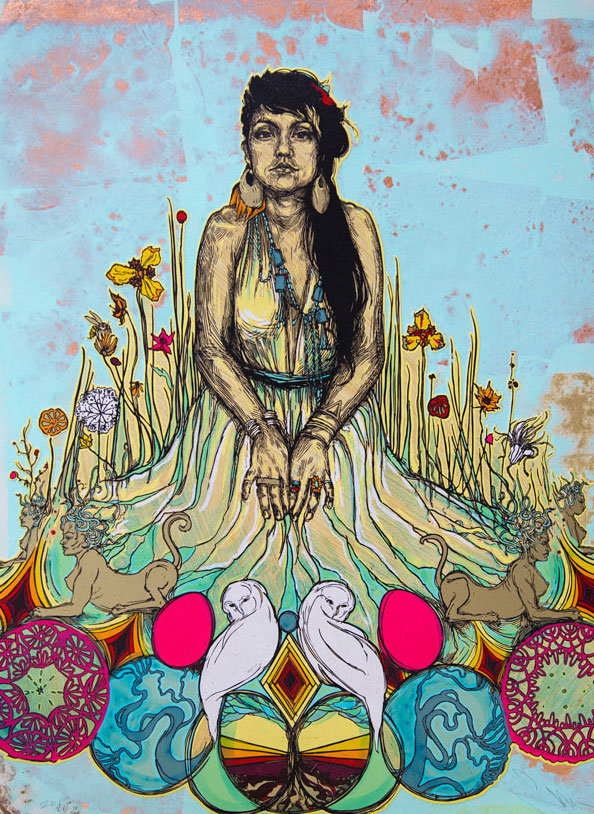 How did you first begin using wheat pasting as one of your primary mediums for graffiti and what do you enjoy about it?
I first started wheat pasting out of a desire to make work that interacted directly with the city. I started making block prints, and cut-out paper figures, and pasting them around NYC. I immediately loved the way that it let my drawings become part of a building, and part of the landscape.

You've stated that much of your art is inspired by people you know and casual encounters you have – can you give an example of a recent time that this happened and the artwork it led to?
The last portrait that I created, just to give an example, was of two people who I know and love and who are part of a project that I've been a part of for the last 7 years called The Music Box. It's an experimental musical architectural hybrid in New Orleans that people can interact with by playing small buildings that artists and musicians have created. The buildings function like an instrument and an environment at the same time.

The drawing started with two people playing the buildings, and it will later be built into the space itself, in New Orleans, probably at the entrance gate. So it's kind of a symbiotic relationship between the community based project and the drawing. 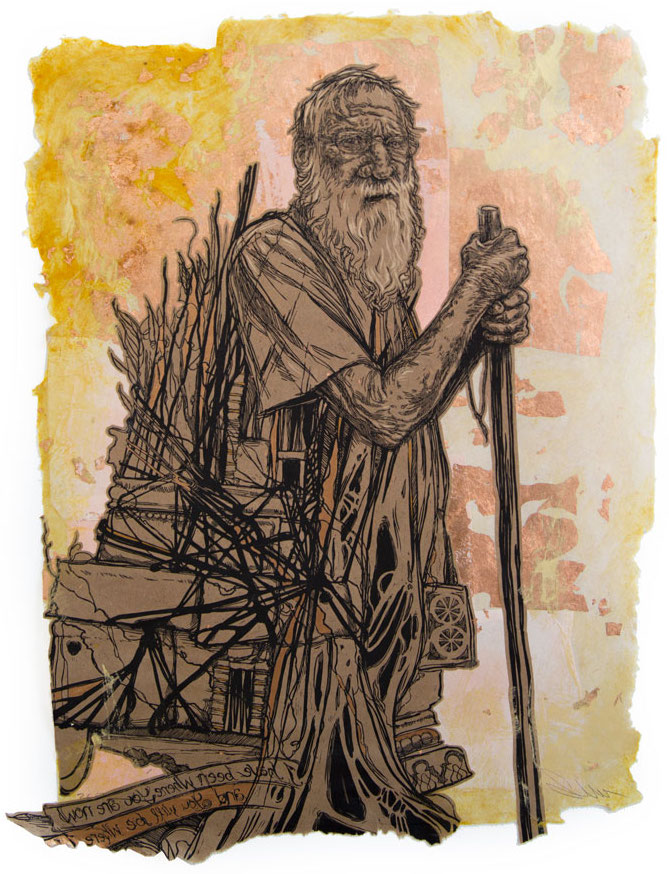 Your bio explains that you are interested the relationship between people and their built environments. Has one of your own environments been especially meaningful for you?
This interest started when I moved to New York City at the age of 19 and was immediately filled with the sense that cities are the greatest works of art we as people have ever made. The complexity, energy and ingenuity present in every facet, and also the wild aesthetic that gets born when that many humans all start announcing themselves together at one time - it's incredible.

I wanted to make artwork that directly interacted with that, and that's how I began working out on the streets. From there, my interest deepened from interacting with the environment of the city into creating the environments myself, from building out immersive installations, to building structures that could be lived in and interacted with in different ways, like rafts or earth-bag buildings.

"Art gives us ways to transform the raw materials of buried pain and confusion into tangible expression."

You've also spoken about how you hope your role as an artist can be as a mental and emotional processor for trauma – why and how do you think art is so beneficial in this type of emotional healing?
That's such a good question. From my own experience I can say that because art is not strictly rational, (it's neither linear like traffic nor rule bound like taxes), it can function at a very deep level inside of us, way down in the subconscious reaches of ourselves that our every day discourse can't reach. Much of trauma is buried deep down inside the psyche, in places that are not accessible to ordinary conversation or analysis.

I would say this is true at a personal level as well as at a societal level. Art gives us ways to transform the raw materials of buried pain and confusion into tangible expression, and that is incredibly empowering. It also gives us a way to share that empowerment through a language that bypasses the rational mind and goes straight to the heart. 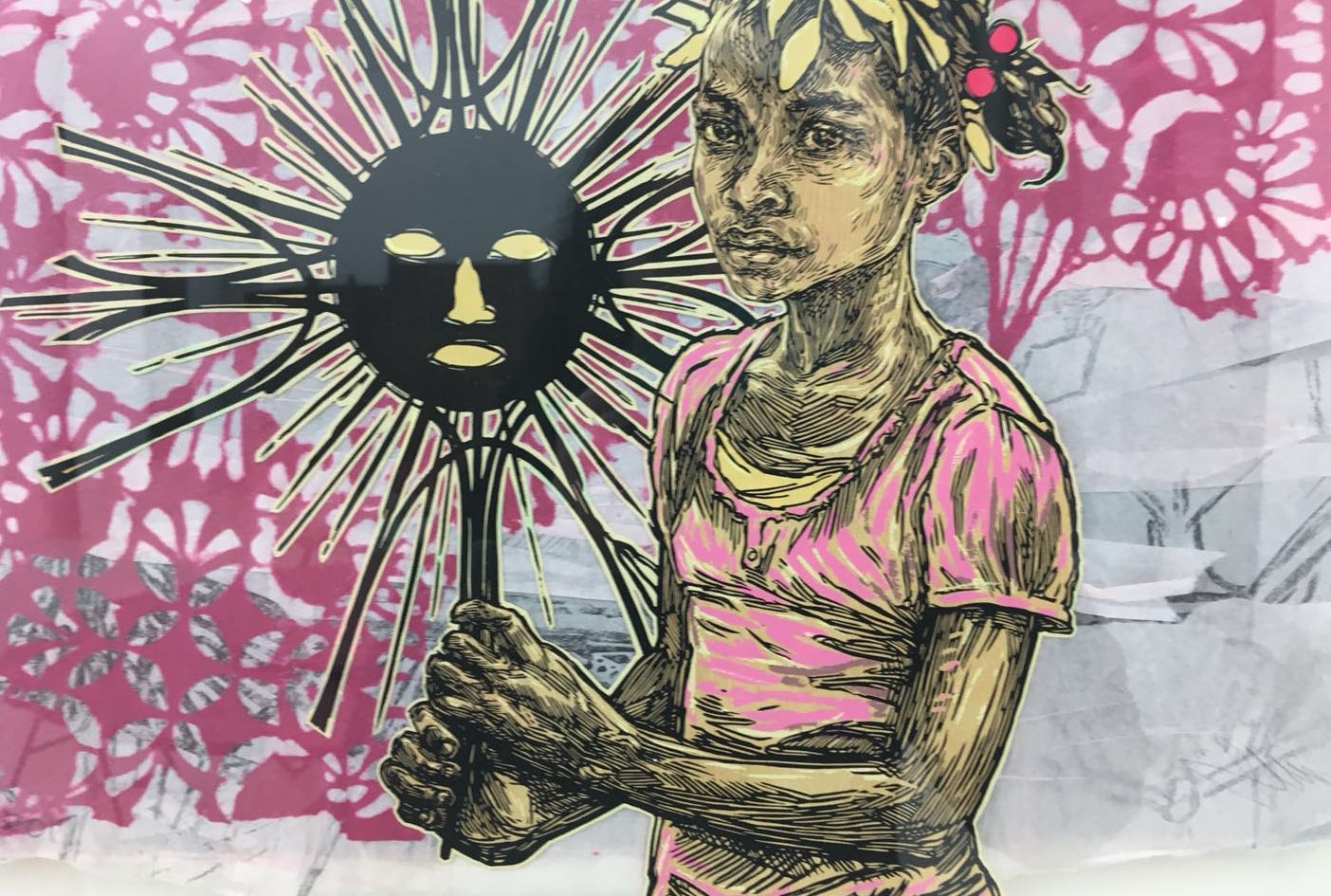 Tell me about how your activism intersects with the art that you create, as well as the role that you believe artists can or should play in advocating for change – both in a literal humanitarian way like with the Konbit Shelter and your Heliotrope Foundation, and in a more abstract way through your art.
I believe that two of the most powerful ways that art can interact with the world and with our larger culture are this: the first is when you take the creative process and apply it directly to a situation of need. So what we've done with the Heliotrope Foundation projects, like the work in Haiti, has been to say: ok, here is a catastrophe, what special skills do we as artists have that can address this? We can build, we can create things beautifully in the midst of rebuilding, we can mobilize our community for fundraising, we can build bridges culturally so that people who are solving the same problem in different places can learn from one another.

And the second way is more personal. It's like my work around trauma and addiction. Because I grew up in a family of addicts who were also experiencing mental health issues (because addiction is largely caused by trauma and creates a cycle where trauma is passed down), I had a lot of healing to do. And once I had done that work within myself, I found that I was uniquely able to make work which spoke to these issues because I cared so much. I was transforming something within myself, so I felt able to try to transform the larger cultural conversation of how we understand trauma and addiction, and let my work be a part of that transformation as well. As you did much of your early work during the late 90s and early 2000s street art explosion in the US and Europe, what is one of your strongest memories from that period?  How does that compare to the state of street art today?
One of my strongest memories from that period was in Berlin. I started doing some paste ups there, and almost overnight I became plugged in to a huge community of people who were thinking about street art in deeply experimental and radical ways, and who were using every inch of the city to do it. It was really a wonderful moment.

I don't know if I can truly speak to the state of street art now, because I have been working in so many different mediums that I no longer feel as plugged in to that community. One change that has surprised me though is the shift from experimental, illegal, impermanent gestures, to large scale production murals with budgets, equipment and permits, without ever shifting the term 'street art.' I do think they are perhaps two separate movements.

"I think we still have very few concepts for understanding genius as it applies to women."

You've said in other interviews that when you were starting out under the name Swoon, people assumed you were a man, especially in the male dominated discipline of street art – how has this effected you?
I think I have slowly grown to see how important it is to stand up and be counted as a woman, and to assert that my hopes and dreams, my perspectives, and my particular female brilliance all have a right to be respected on the global stage.

I think we still have very few concepts for understanding genius as it applies to women. We think of Leonardo the engineer painter, or Damien Hirst the bad boy, both of which are very stereotypically masculinized caricatures of what genius can look like.  I am starting to ask myself if there are other, more feminine forms of genius that we as a culture simply fail to recognize, and how I can help make space for them to be seen. Tell me a bit about what we can expect at your Shanghai show at MD Gallery.
The work in the show is mostly a new body of work that I have created using handmade paper. Handmade paper is such a wonderful and fluid medium. You start with a base sheet of wet fibers, and then there are infinite possibilities of how you can play with that, what kind of materials you can embed in the surface, and how you can build it up from there.

So, the work in show is a lot of experimentation and play that I'm doing with a new medium, combined with the figurative block prints that represent my classic body of work.

What are you looking forward to about showing in China for the first time?
I'm just really excited to share my work with people in another part of the world, especially China, which has such an incredibly rich and impactful creative cultural history. And speaking of cities as works of art, Shanghai has the most populous city proper in the world. Amazing! I'm honored to be showing there.

All artwork by Swoon, courtesy of Magda Danysz Gallery.

We interviewed award-winning television director René Balcer to find out more about his newest doc, a chronicle of Jewish refugees in 1940s Shanghai.