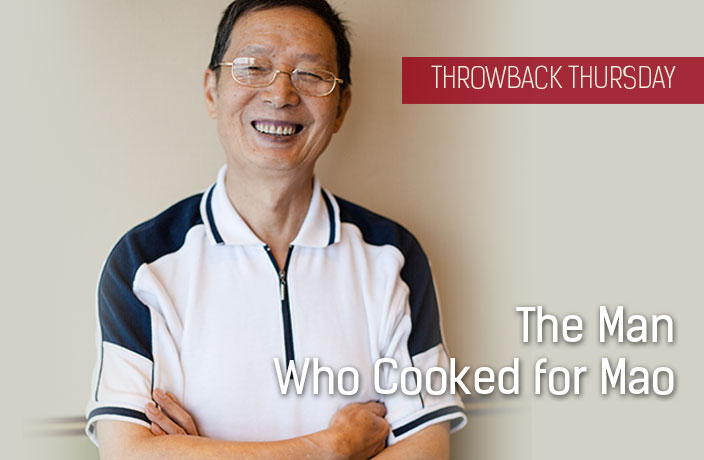 Talk to anyone over the age of 50 in China and you’ll be guaranteed at least one fascinating story. But it’s not every day that you meet someone who has had first-hand experience of China’s history makers. As far as chefs go, Dong Linfa has led an extraordinary life.

In the beginning, he had not even the slightest interest in cooking. It wasn’t a calling; it was a job. But he excelled at it. So much so that eventually he ended up in the inner sanctum of the Chinese Central Government.

Dong got his start in 1951 at a landmark familiar to all of us in Shanghai, the Jin Jiang Hotel. He was 14 and had scarcely picked up a wok, much less cooked, but he quickly endeared himself to his superiors. “I followed the master chefs around everywhere,” he tells me. “They liked me; I was a sweet talker.”

After only minutes of talking with him, I see how this could be possible. The soft-spoken 72-year-old always seems to be smiling. In spite of his impressive culinary credentials, he has a refreshing air of humility about him; he is immediately likeable.

But at the same time, I can’t imagine that this self-effacing charm got him out of the menial tasks assigned to any kitchen apprentice. And my hunch is correct.

“Every day, at 6.30 in the morning, I was expected to be at the Jin Jiang to prep the kitchen and make tea for all of the master chefs,” he recalls. He was always the first one in the kitchen; in the evenings he was usually the last one out. This hard work did not go unrecognized. In 1960, after a long night in the kitchen, Dong’s manager summoned him to his office.

“Tomorrow,” he told him, “you’ll go to Beijing to work in Zhongnanhai (seat of the Chinese Central Government and the residence of all top-level government officials).”

“Is this a short or long-term posting?” Dong recalls asking.

“Hard to say,” his boss answered in that characteristically Chinese way. “Just pack everything you need. Go home immediately. Tell your parents you’ll be posted outside of Shanghai for work.”

By this time it was two in the morning. Dong hurried home and knocked on his door. His mother, half-asleep, answered and he gave her the news.

“I got packed, but I couldn’t go to sleep. I still had to cook breakfast at the hotel. So I said goodbye to my parents and rushed back to the Jin Jiang.”

Exhausted and excited in equal measure, Dong powered through breakfast service. And then he was off to Beijing. He had no idea who he would ultimately be cooking for.

Chef Dong may have gotten to Zhongnanhai on his own hard graft, but how he came to cook for Chairman Mao is really something of a fluke. A classic right-place-at-the-right-time story.

At first, Dong was one of many chefs working in a central kitchen. An important foreign dignitary was visiting Beijing (Chef Dong diplomatically dodges me when I ask him who) and in true Chinese custom, a banquet was in order.

Deng Xiaoping was to host it at his residence, but all chefs were required to take four days off per month; Deng’s chef happened to be on holiday. Dong was selected to cook in his place.

When I ask him for details on what was arguably the most important meal of his career, I expect the kind of bombastic talk I’m accustomed to when I hear Western chefs talk about their creations. But for Dong, it just seems like it was any other meal.

“I cooked a pork shank and another dish of baked carp,” he tells me, “and the guests liked it."

"No big deal,” his tone of voice seems to imply. But make no mistake, this was huge. After dinner, he was called out to the dining room for a photo opportunity. The next day, he was transferred to the Chairman’s residence. He was only 23. 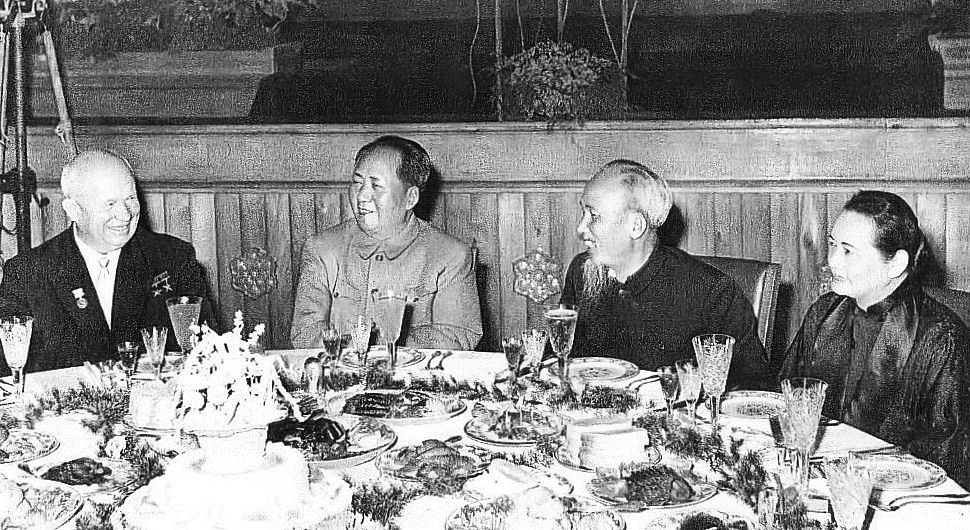 Mao with Nikita Khrushchev and Ho Chi Minh during a 1959 state dinner in Beijing. Image via Wikimedia Commons.

If Dong thought Zhongnanhai’s central kitchen was a tough gig, nothing could prepare him for his new posting. Mao was a man of tremendous energy. Never one to follow routine, he kept an erratic sleep schedule (some accounts say that he could go without sleep for days on end) So, naturally, his eating habits followed suit.

“Anytime Chairman Mao wanted to eat, that food had to be at his table within 20 minutes,” he recalls. “Back then, we didn’t use gas to heat our woks, we used coal. Well, it’s impossible to get a coal fire stoked and burning to the right temperature in 20 minutes, so we kept the stove burning 24 hours a day.

"When I first started, I was so tired I would let the fire burn out. So I always asked someone to wake me on the hour, every hour. But I was a deep sleeper. No matter how loud they shouted or how hard they shook me, I wouldn't get up. But eventually I got used to it. It got to where I would wake up every hour automatically.”

It wasn't just an erratic schedule that Dong had to adjust to. Mao seldom stayed in the same place for very long either. He had a private train that would move him about from city to city. Wherever he went, he took his essential staff with him, which meant that Dong came along too.

It was not always easy. Sometimes there was no stove. "A few times, I had to dig a hole in the ground, start a fire and cook for him there,” he tells me.

Not surprisingly, the only times he didn’t cook were their visits to Hunan, Mao’s home province. “That was the only time I would step back and observe; I would watch and learn,” Dong recalls.

But in spite of the rigorous and erratic work schedule, Mao was especially easy to cook for. He never really enjoyed the luxurious banquet fare like bird's nest or shark's fin that Dong cooked up for important guests. He more tolerated such food as a necessary formality.

Rather, his tastes were simple. If Mao had breakfast, which was very seldom, it was “just plain porridge and milk.” Lunch was only slightly more elaborate: "Three simple dishes. Usually vegetables or bean curd, and a very small amount of each.”

Perhaps the only difficult request he had was at dinner when Mao asked for all bones to be removed. As for his favorite dish, nearly every Hunan restaurant you go to in China will claim that Mao was a voracious eater of hongshao rou (red-braised pork) But according to Dong, he ate it once, maybe twice a month, tops.

"Mao thought that all the fat was good for the brain and it helped him think better," Dong adds. 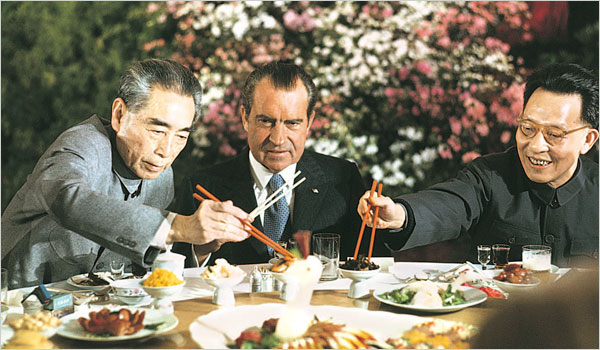 When we read about an important historical personage in a book, he usually has the personality of a statue. So I ask Dong about his interactions with the Chairman.

"For someone as important as he was," he insists, "he always made it a point to talk with me like I was on his level. He was never condescending."

Mao even tried to set Dong up on a few dates. "One time he said to me, 'Dong Shifu, Zhongnanhai has a lot of pretty girls. I’ll introduce some to you.'"

But Dong had set his sights on settling down with a Shanghai bride. They left the conversation at that.

Then, one day in 1965 he was catching shrimps in a lake in Zhongnanhai. Mao approached him, "I've thought about it. Why don’t you go back to Shanghai? Go back to Shanghai and find yourself a wife, then come back in a year."

Dong left Zhongnanhai almost as quickly as he arrived. He did end up finding a wife – a fellow chef. A year passed and he never returned to Beijing.

He continued his career as a chef at the Jin Jiang, and since this was traditionally where the Shanghai government would put up visiting party officials, he would still cook for Mao on occasion. He also had the opportunity to expand his CV with dinners for other dignitaries, including Queen Elizabeth II and Richard Nixon.

Today, Dong Linfa resides in Shanghai with his wife, who is a master of Sichuan cuisine (imagine being invited for dinner at their place!) I ask him what he does with himself now, after such a long and extraordinary career. "I just relax and rest,” he sighs. “I’ve worked so hard all my life, now it’s time to enjoy it.” 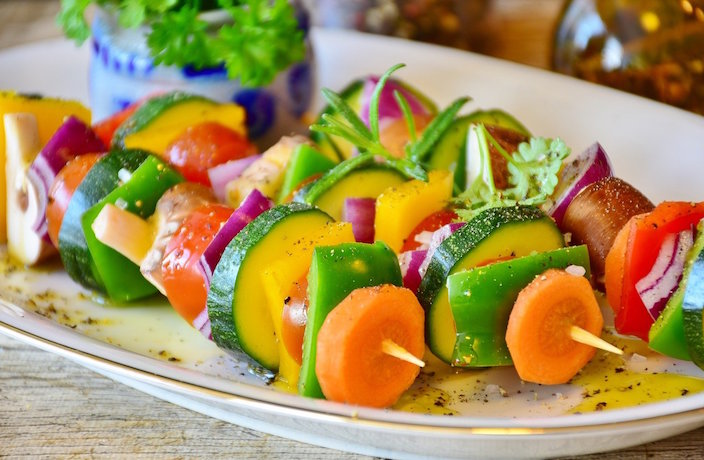 It's still comfort food, just a wildly creative version of it.