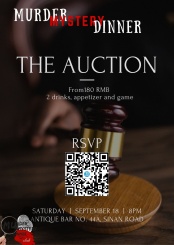 "The auction of Baroness Audry von Munchen's archaeological artifacts has been triggered by her "unfortunate" death. You get to play a character in an intriguing mystery full of double-dealing, bribery, blackmail, and intrigue. In the game you won't just be watching; you'll be fully immersed in the action — perhaps as a ruler as a lady. A dealer of antiques. A butler... Even a spy… Everyone will have a chance to make their accusations before the inspector will reveal all". There was a victim, and you can help us find out the killer. During the course of the party, everyone tries to find out who the murderer is. (The murderer, meanwhile, tries to avoid detection!) Everyone becomes involved in an evening of scheming, plotting, and blackmailing each other. We welcome people dressed up as their characters, you'll receive an email 4 days before with your role. 2 drinks, and an appetizer included. RSVP is a must, walk-in not admitted: info@murdermysteryclub.cn