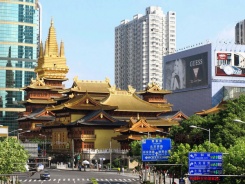 Now one of the most famous landmarks of Jing’an district, this Buddhist temple was originally built near the Suzhou Creek in 247 AD, and was relocated to its current address on Nanjing Xi Lu during the Song dynasty (in 1216). After a short stint as a plastic factory during the Cultural Revolution, the temple was reconverted back to its original purpose as a place of worship in the 1980s, followed by multiple restorations  to reestablish and accentuate its former glory. The 3.8-meter-tall jade Buddha that sits in the middle of the temple -- the largest of its kind in the country -- is one of the main attractions.