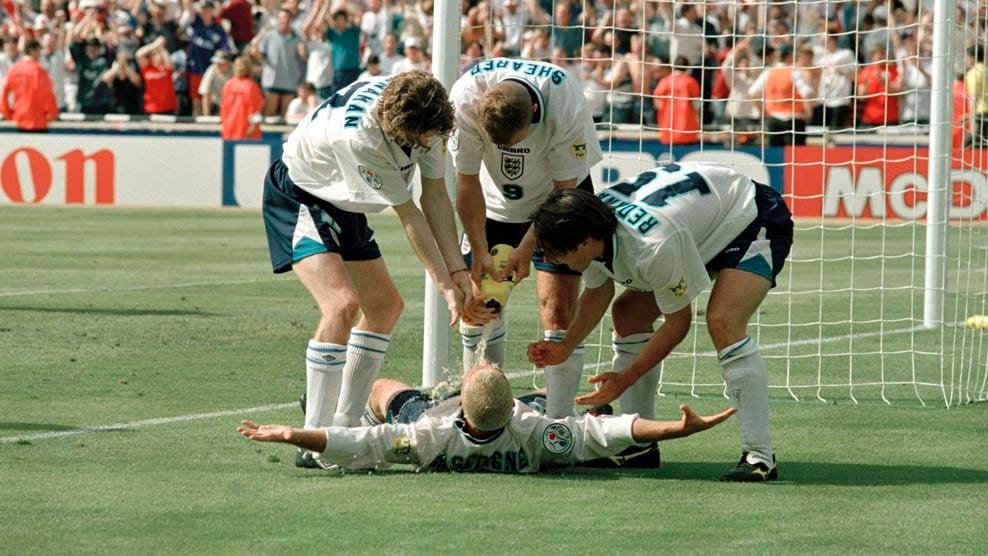 Former England international goalkeeper, Ian Walker played for Tottenham Hotspur, Leicester City and Bolton Wanderers. In 2012, he moved to China to become goalkeeper coach of Shanghai Shenhua, before crossing the city divide to join Shanghai SIPG in 2014. In Walks the Walk he talks football and China.

I made it to two European Championships in my career, in 1996 and 2004. And at that first one, it was a certain Paul Gascoigne who made the headlines. For all the wrong reasons. And then all the right ones.

Ask any Englishman what he thinks of when he hears the words ‘dentist chair,’ and it is not the sound of drills. It is a mercurial Geordie looping a ball over a stumbling, despairing Scottish defender and smashing a volley past their helpless goalkeeper, before running to the touchline, lying down, mouth wide open, as his teammates squirt a water bottle into his big grinning gob.

And it all started in Hong Kong. In preparation for the tournament, which was to be held in England in June, the squad had traveled for a tour of East Asia, where I won my second cap in a friendly against China in Beijing’s Workers Stadium. 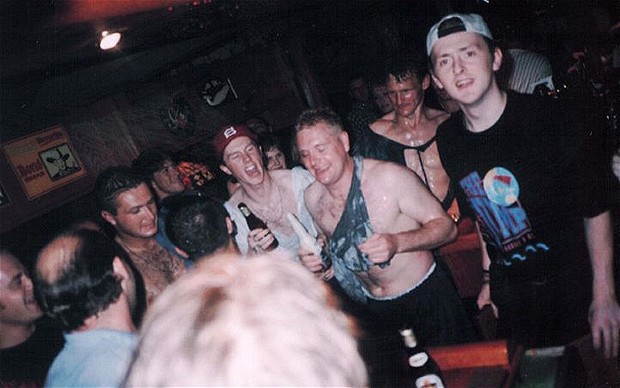 We were flying out from Hong Kong and, having played our games, the mood in the camp was relaxed, so manager Terry Venables said everybody could go and have a drink downstairs in a little place next door to the hotel. He said Bryan Robson, who was one of the coaches, would look after us, no problem.

So sure enough, all the lads went out. Obviously, we’d been working a long time, not being able to go out, so everyone wanted to let loose for a little bit. We were all in there having a couple of drinks and having a good time… and for some reason, it kind of escalated and started going a bit crazy.

“Bryan Robson was standing there with a pint, and and someone grabbed his shirt it and ripped it. All he had left was the little round collar: the rest of it had gone. He just carried on drinking like nothing had happened!”

I don’t know what it was, but Bryan Robson was standing there with a pint, and he was wearing one of those shirts with a round collar, and someone grabbed it and ripped it. All he had left was the little round collar: the rest of it had gone. And he just carried on drinking as nothing had happened!

He was the one that was supposed to be keeping an eye on us, so from then on it all went a bit mad. And then, as we all know, someone found a dentist’s chair in another room. So of course – bang! – straight away we’re on it. I think Gazza went on first, then I had a go, then Teddy Sheringham. Then it all went off, just bedlam. 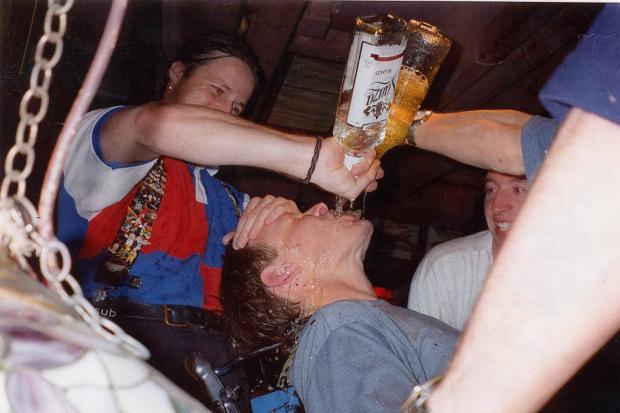 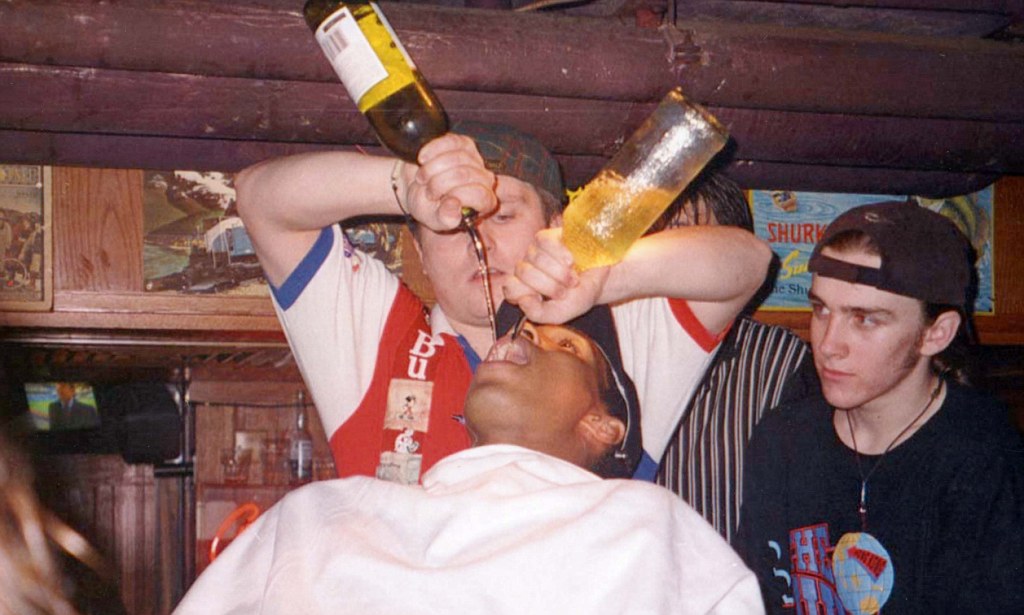 People were taking pictures though, and it soon got out. Suddenly the UK papers were raving: “Look at these joke players who are supposed to be representing England and playing in the European Championships next week.”

Then supposedly somebody broke a screen on one of the seats on the flight home, and somehow that got out too. I don’t actually know if anyone did break one, but of course, that exacerbated matters – “Look at these drunken hooligans, out of control.”

“Someone found a dentist chair so of course – bang! – straight away we’re on it. I think Gazza went on first, then I had a go, then Teddy Sheringham. Then it all went off, just bedlam”

The British press were unforgiving.

Back in England we stayed at Burnham Beeches, the team hotel, and it kind of became a siege mentality; an ‘us against them’ situation. And because a lot of the grief was aimed at Gazza, it was planned that if he scored, they would recreate the dentist chair.

Sure enough, in our second group game against ‘Auld Enemy’ Scotland, with us holding a slender 1-0 lead with 15 minutes to go, the Scots are awarded a penalty. Up steps their captain Gary McAllister, but David Seaman saves it and lumps it upfield, where it falls to Gazza.

The rest, as they say, is history. Wembley was in raptures and we were left with one of the most iconic images in English football folklore. It’s lucky that water bottle was there. 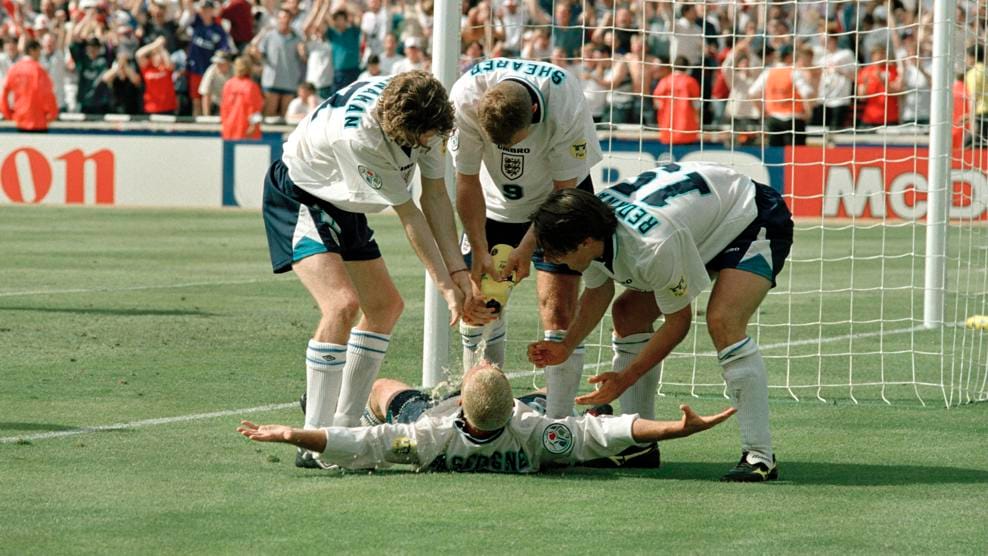 "It’s lucky that water bottle was there."

The hijinks didn’t end there, either. That night Venables once again said we could have a few drinks in the bar (luckily it was only us in the hotel this time!). The Burnham Beeches grounds were big, and at the far end of the lawn you could see the media tent.

The lights were on in there and we realized Venables was conducting a live interview. There was a big screen in the bar and, with the camera facing Venables, in the background you could just make out the lights of the hotel.

So we’d all had a couple of drinks, and suddenly Gazza disappears. The next thing you know you can see this little figure in the distance on the TV. And he is getting closer and closer – he is really running as fast as he can. And then he gets into the camera lights and you can see he is stark naked, but for his shirt over his head, so you can’t tell who it is. Everyone in the bar is rolling around on the floor.

“The next thing you know you can see this little figure in the distance on the TV. And he is getting closer and closer - he is really running as fast as he can. And then he gets into the camera lights and you can see he is stark naked.”

As far as I know, no one said anything about it. And nobody would have known who it was, but yeah, of course, it was Gazza. Once again easing the boredom, like he always does. I’d love to see if anyone captured it, it is something that should definitely be on YouTube!

We ended up doing really well in the tournament, making it all the way to the semi-final, and an inch away from winning that. And that great goal against Scotland was almost enough to get everybody back on side.

From drunken hooligans in Hong Kong to hero-worshipped at Wembley, it was a good run!