In an industry dominated by big-brand hotels, luxurious cruise tours and preorganized, cookie-cutter vacations to tropical beaches, the team at Koryo Tours are rebels. These renegades of tourism are most famous for their various tours to the DPRK, or North Korea, but the company offers so much more, including trips to Central Asia, Russia and Bhutan. To learn more about the company’s off-the-beaten-track tours, we caught up with Simon Cockerell, the general manager at Beijing-based Koryo Tours.

Koryo Tours is well-known for its DPRK adventures, but your team offers tours to other nations as well. When did the company start branching out?
In 2004, Turkmenistan Airlines opened flights between Ashgabat and Beijing. I was fortunate enough to be offered a ticket on their first flight and made a recce visit myself at that time. I found the country to be fascinating, friendly and deeply intriguing – just the kind of place we like to visit. I went again in early 2005 and then we started running group tours. Since then, we have consulted on various other projects for media, guidebooks and so on.

We continue to operate tours to Turkmenistan and have also added Tajikistan, Mongolia, parts of Russia, Kazakhstan and now Bhutan to the list. The reason for this expansion is basically to offer the kinds of people who travel with us an experience that they would not otherwise be able to arrange for themselves.

Of the Central Asia nations Koryo visits, which would you recommend to someone unfamiliar with the region?
The ‘easiest’ to visit would be Kazakhstan. It’s the most developed, has cities which are easy to get around, a cosmopolitan society and isn’t particularly hostile or difficult for first-time visitors. What we offer there is of course the highlights plus trips to some complicated and complex parts of the country, such as the nuclear weapons testing area of the Semipalatinsk Polygon, so that visitors get a complete range of experiences.

For me, though, my first choice would be Turkmenistan – despite the well-documented complications of traveling there. It is the most difficult one and the most different to the others (only by a nose, though, Tajikistan is also a very distinct place). The travel experience there combines history, the current idiosyncratic system and its architectural and social manifestations, as well as very welcoming people.

I know this isn’t a conclusive answer but I would say that if someone has the time they should travel through all Central Asia. 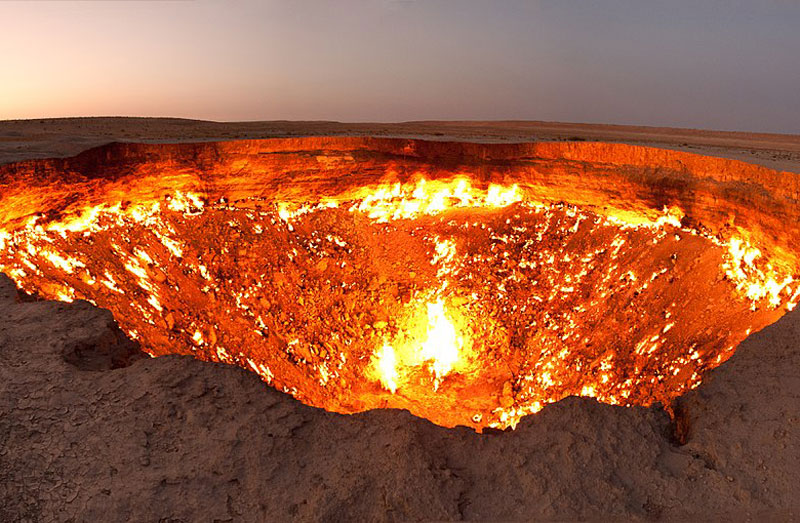 The Gates of Hell in Turkmenistan is a fascinating spot. What can tourists expect from this destination?
The site is a giant pit formed by a gas extraction industrial accident decades ago. Leaking gas was ignited by locals to burn it off and yet here we are in 2020 and it is still burning. The moniker ‘Gates of Hell’ is one most people in Turkmenistan don’t bother with, but it is still accurate.

We drive there, pitch camp and our local drivers cook up a superb desert feast of shashlik and various vegetables. Visitors can go down to the crater, pose for photos, climb a nearby hill that offers a view into the heart of the inferno – made up of thousands of smaller flames, plus a giant central spout of fire – and simply be hypnotized by the experience. Birds often wheel overhead on the updraft and insects are called to the pit by some force that compels them to walk into the flames; it is simply an otherworldly place, and for the mild discomfort of sleeping one night in a tent with no toilet facilities nearby you get to experience something that will stay with you forever.

Whereabouts in the mighty Russian Federation does Koryo currently offer tours?
I have been to Russia something like 30 times and I strongly recommend it. It’s simply a unique country in so many ways. The places we operate tours to are remote and complicated parts that are perhaps not ideal for first-time visitors to Russia. If you join a tour with us and you haven’t been to Russia before, then stop in Moscow and St. Petersburg on the way for a touch of normality first.

We do trips to Norilsk in the Arctic circle, a closed-city (meaning foreigners aren’t allowed, we have a way in, though) that was originally a gulag mining settlement.

The other place we take tourists is to Magadan in the North of Russia’s Far East. Known primarily for its dark history as the worst of the gulag regions during the USSR’s darkest period, it has a stunning natural landscape punctuated by abandoned cities and towns. You’ll find resilience, humor (both dark and light), history (mostly dark) and vast distances of tough ground to cover.