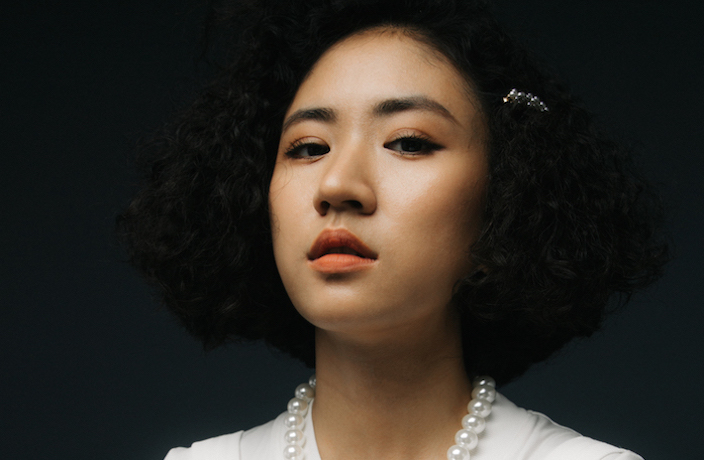 Taiwan singer 9m88 has been impressively active over the past few years, releasing singles that combined her various sensibilities for jazz, funk and Mandopop to create an unpredictable maelstrom of sound. She dropped her debut album, Beyond Mediocrity, featuring gorgeously polished jazz tracks, while music videos taken from the album have shown off her fashion kudos. We took the chance to catch up with 9m88 to talk fashion inspirations, cross-cultural influences and taking it back to the ’80s.

This is your debut album. How long did it take to write the songs and produce them before you were happy with the finished product?
I literally locked myself up in my apartment in Brooklyn trying to stir my brain juice hard. After the initial lyric-and-song-making process, I started to talk to my collaborators and producers about what colors, chords and instrumentation I wanted. When everything was prepared, I went to a studio and recorded.

How has living in the US influenced your music, and in what way do you remain connected with Taiwan?
Since leaving Taiwan, I guess I began to look at music in a really different way. Before studying music in the US, I treated it only as a medium to present myself. Now, the way I see music is as a therapeutic tool and a good channel to share my emotions and ideas.

You studied fashion in Taipei. How important is style to your overall package as a musician and a performer?
Style and fashion were quite important to me from day one. I don’t think that would change if I weren’t a musician – I’ve always been a person who likes garments and thrift stores. I’m pretty happy that I have gotten to work with some cool and prestigious brands as a musician though. In terms of my hair, I’ve permed it since from high school, just because it matches up more with my personality. (I’ve actually been doing it too long and I feel like changing to another hair style soon!)

In the video for ‘Love Rain’ we see you rocking out with a key-tar, checkered yellow and orange material suits, as well as using classic music video tropes. Why did you choose to base this MV within an ’80s time span and what influences do you take from that period?
This song was originally made for an online short film in Taiwan, kind of like a theme song. I wrote the song with an ’80s mindset. At the same time, I really wanted to do a music video with choreography. So for the styling and aesthetics, we went the Madonna and Janet Jackson route right away. I won’t say it’s only about ’80s fashion in America. There’s some Cantonese and Japanese aesthetics to it as well. I enjoy seeing those genres and fashion elements as materials I can play with. The director ‘Sid and Geri’ has its own ironic and vivid aesthetic. It might look like a low-budget MV that tries too hard to reach the commercial standard, but actually, we are aware that this isn’t the case.

“I wrote all my songs and went through the tedious process of producing this album, which allowed me to finally go beyond something that seemed impossible to me in the past. In that sense I feel a bit beyond mediocrity right now, I guess”

We loved your cover of Mariya Takeuchi’s classic song ‘Plastic Love.’ How big of an influence is early city pop, as well as Mandopop, on your music?
Mandopop played a key part in my childhood. I grew up listening to it. I thought I would be a proper Mandopop artist when I was a kid. Even though I’m doing something a bit different, the way I phrase some of my music sounds a bit Mandopop for sure. City pop was something that came in late in my music journey, but is so inspiring to me.

You’ve talked a bit about the meaning behind the album title Beyond Mediocrity. Could you explain why you chose this name and how it relates to the time in which you were writing the songs that appear on the album?
The title is simply there for self-assurance. I initially didn’t go to music school so the idea of being a real musician/singer was really distant for me, even though I grew up liking music and singing a lot. I wrote all my songs and went through the tedious process of producing this album, which allowed me to finally go beyond something that seemed impossible to me in the past. In that sense I feel a bit beyond mediocrity right now, I guess!

Listen to ‘Beyond Mediocrity’ here.