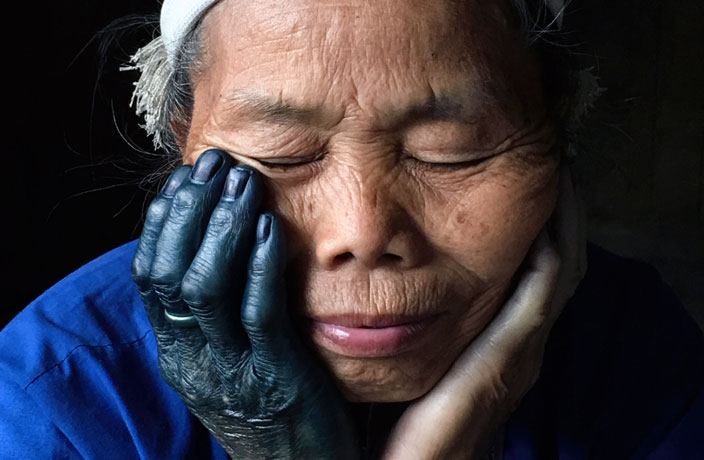 A fifth-generation Chinese-American from sunshine-soaked California, Mark Leong takes photos that are immediately striking. His images have been featured in a range of prestigious publications, including National Geographic, Time and Fortune, and for good reason: his shots are both visually striking and laced with emotion.

Leong graduated from Harvard back in 1988 and was honored by the university with a George Peabody Gardner Traveling Fellowship, which allowed him to hop a plane to China to spend a year exploring and photographing his ancestral homeland.

Since that first fateful visit to the Middle Kingdom 30-plus years ago, Leong has been back numerous times, and even spent around 25 years living in the country, most of that time in Beijing. During his quarter-century stint in the PRC, the photographer had the opportunity to visit every single Chinese province, autonomous and special administrative region, and snap shots of the diverse behemoth that is China along the way.

Some of the photos captured by Leong on his countrywide adventures eventually made it into his 2004 book China Obscura, a collection of over 150 photographs profiling a lesser-seen side of China at a time that now seems very distant.

This month, Leong has been gracious enough to share a selection of his work with us. Below each image, personal comments from the photographer himself. 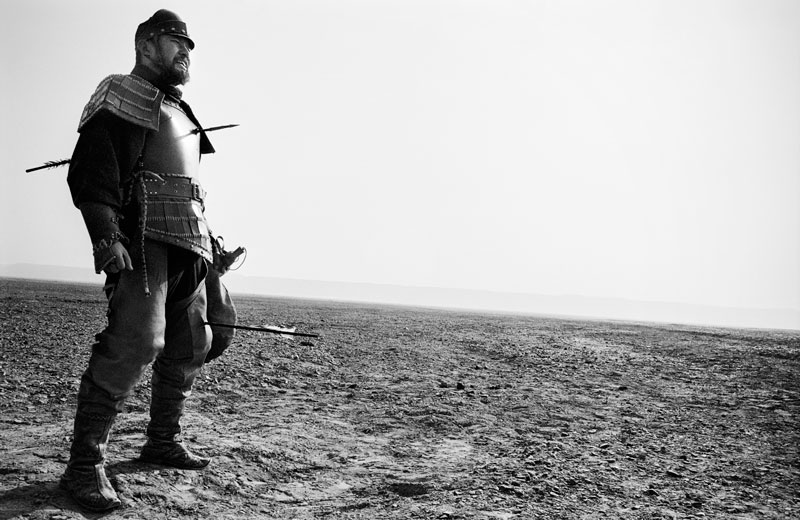 “To shoot a photo for a profile of actor Jiang Wen, I traveled to remote Xinjiang, where he was filming Warriors of Heaven and Earth, which was like a Tang dynasty western movie. During the long break when they were setting up or discussing ideas, I would go on walks in the desert with some of the less busy crew members. I remember one of them telling me my North Face jacket was fake. I also remember the amazing little stones all over the ground. You can’t see it in this black and white photo, but in the low afternoon light they looked like a million tiny, colorful spots – deep blues, burning reds, brilliant greens and glowing ambers.

“I did get the picture I needed of Jiang, but, as with many photographic situations, I found the most interesting shot when turning away from my main subject. In this case, it was the death scene of one of his comrades, played by Harrison Liu, fetching a precious bladder of water before being pierced by bandits’ arrows.” 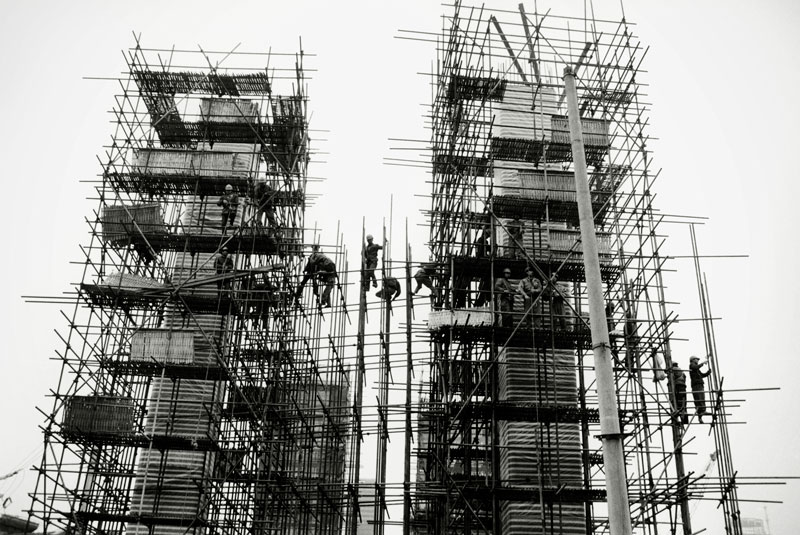 “I had been assigned by Wired to shoot general environmental pictures for a story about the early growth of the Chinese internet. I took a lot of photos explicitly about the subject – internet bars, piles of computers on shipping pallets, service provider companies, hackers at home, tech entrepreneurs on huge mobile phones and guys on sanlunche laden with monitors and printers in Zhongguancun IT district. I also took random photos of everyday things like noodle shops and ear cleaning spoons. In a taxi on the way to a tech company in Shanghai, I saw these men working on the pilings for the new elevated highway, told the driver to pull over, jumped out into the street and shot about half a roll of these guys, who happened to be beautifully arranged across the scaffolding. Again, not exactly on topic, but somewhat appropriate for a story that was ultimately titled ‘The Great Firewall of China.’” 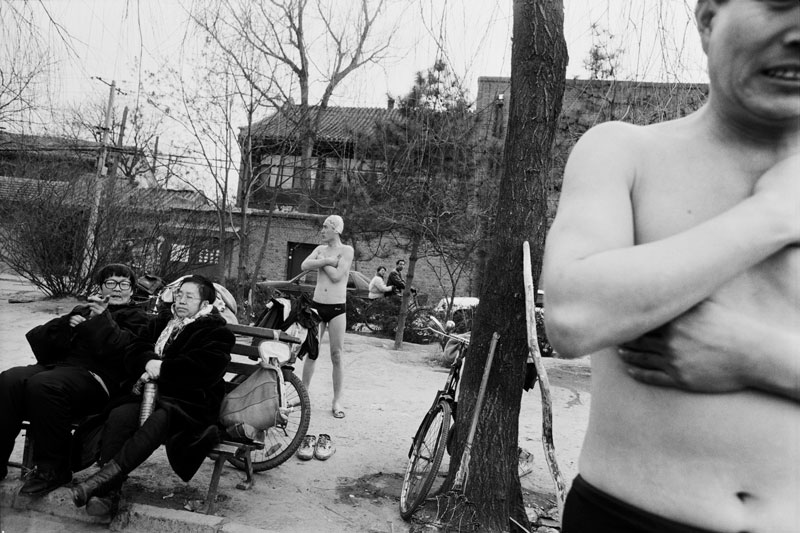 “This photo of uber-masculine winter swimmers at Houhai is an example of what not to do in documentary photography. Don’t arbitrarily tilt the frame. Don’t cut off a person’s face right at the eyes. Don’t have three people staring at the camera, including one pointing his finger directly at you. If you are unable to avoid these things, don’t publish the photo in a magazine.” 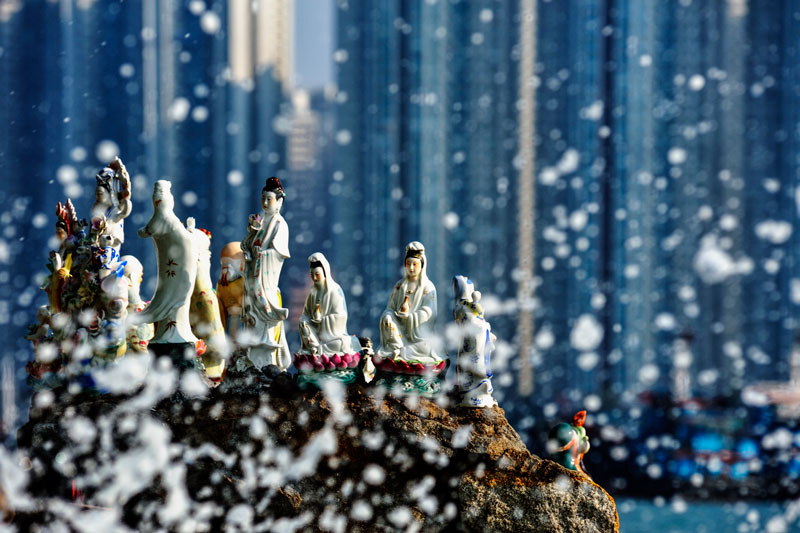 “For a city profile of Hong Kong, I would look for elements of ancient Chinese culture organically mixed in with modern urban life. Once, when I was photographing fortune tellers on the street, a large group of photo enthusiasts also gathered around, speaking mainland Mandarin. We started chatting and they told me that this kind of traditional activity was very hard to find on the Chinese mainland, even just across the border in Guangdong. To see really old Chinese ways, they said, you have to go outside of the Chinese mainland. The same goes for these small porcelain statuettes of the goddess Kwun Yam (Cantonese for Guanyin), cemented to the salt-splashed rocks near Aberdeen Harbor to keep fishermen and sailors safe at sea.” 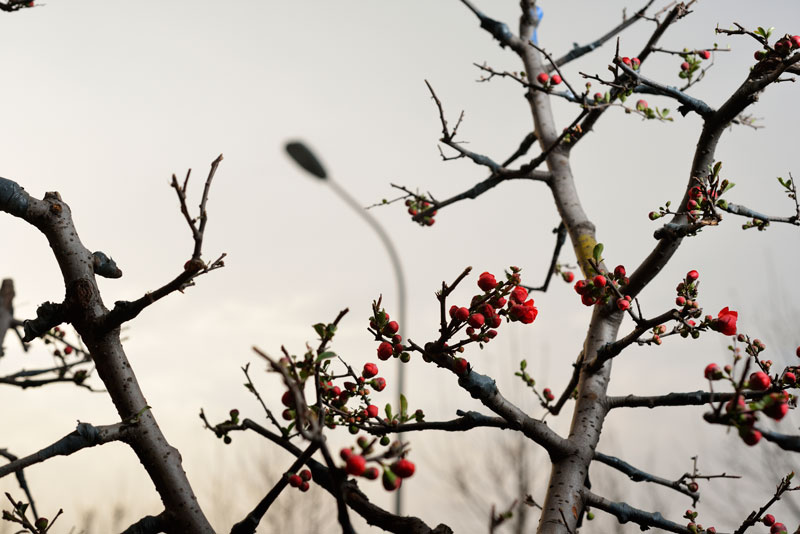 “When I lived in the suburbs of Beijing, flatbed trucks would appear every spring near the supermarket on my street, carrying full-grown trees with their roots packed in dirt and wrapped in big green mesh bags, strangely shaped rocks the size of minivans and carefully grafted decorative plants like this one. Everything was for sale. It was one of those situations I passed by maybe a hundred times before I thought to bring my camera. To me it seemed like a surreal expression of the human desire to displace and control nature.” 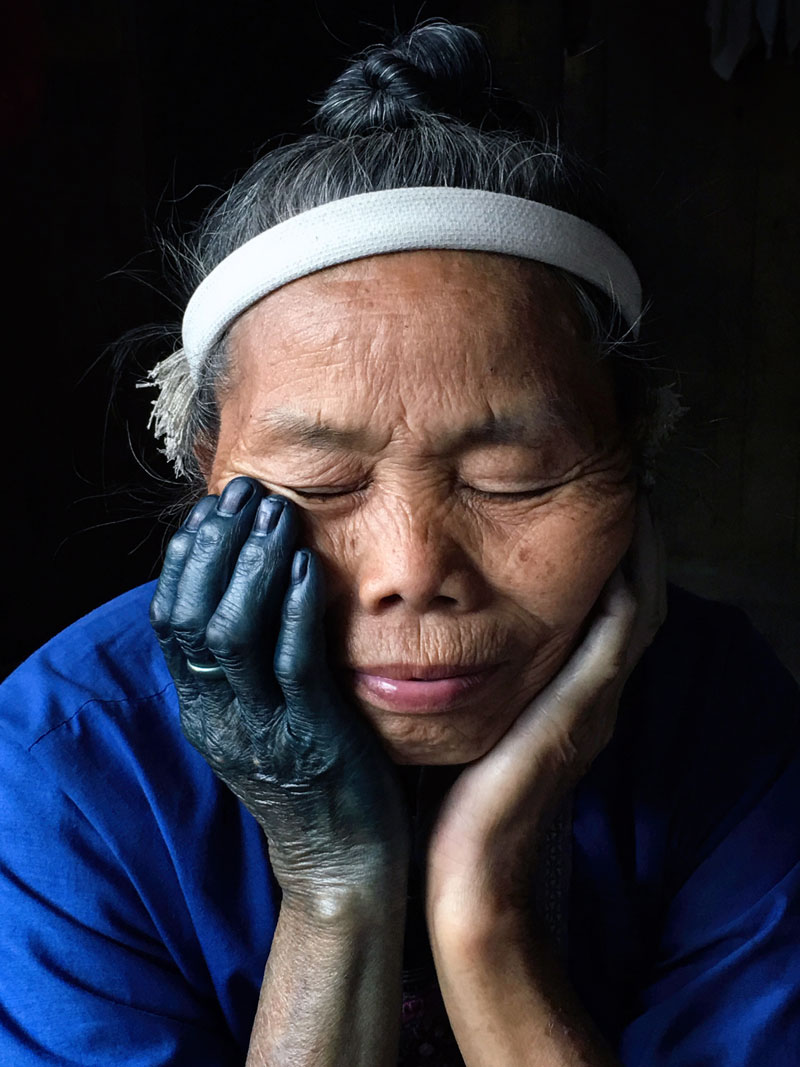 “I usually work with a big, chunky Nikon DSLR, so it is liberating to sometimes shoot with my iPhone, as with this portrait of a Dong minority woman in Guangxi whose right hand, like many women in her village, was dyed blue from dipping cloth in vats of indigo all day. Almost all of my other shots were with her eyes open, but then she blinked and, of course, this is the best one. When I posted this picture on my (rarely updated) Instagram account, I cropped off the bottom to make it square, not realizing that without her wrists in the frame it looks like it could be someone else’s hand. One imaginative commenter noted that she thought it was a gorilla’s hand caressing the woman’s cheek, but couldn’t understand why it was blue.” 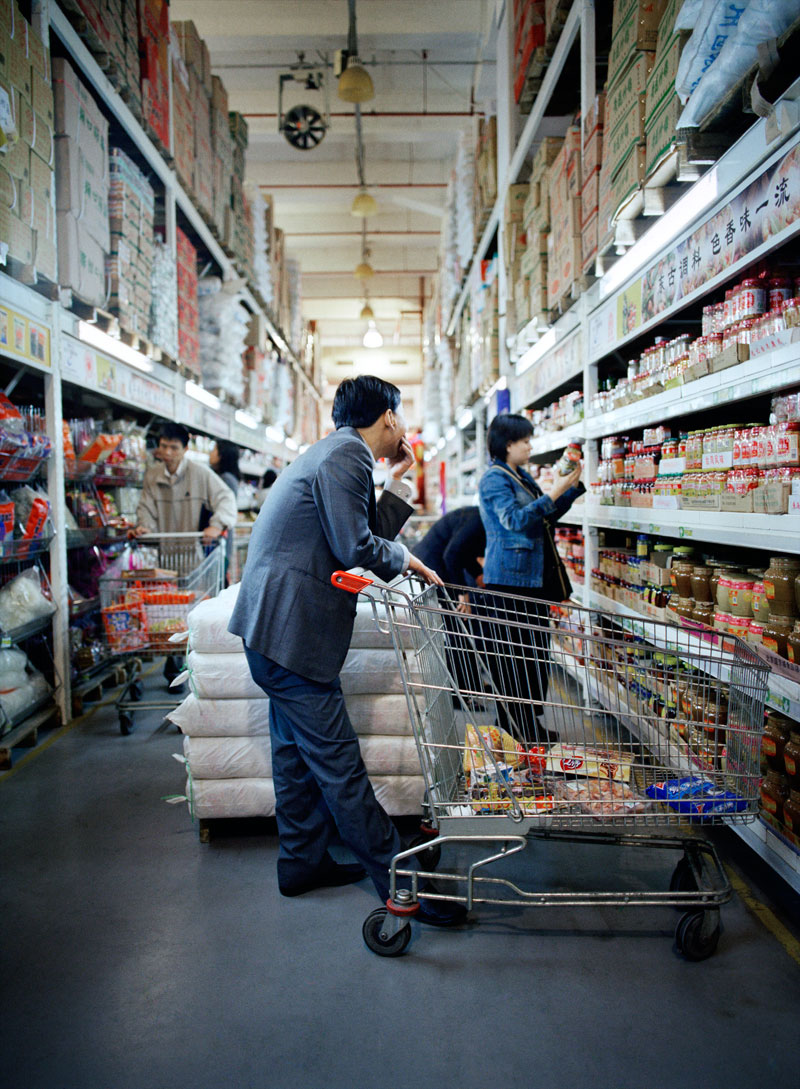 “As the 21st century began, the big socio-economic trend was the transition from mass export production to heavy domestic consumption, as the working class became the middle class and demanded more consumer choice. As a longtime Beijing resident, this was easily noticeable as more and better products became available, including international brands. Instead of two kinds of biscuits, there were 30. Packaging was much more attractive. Toilet paper made huge improvements.” 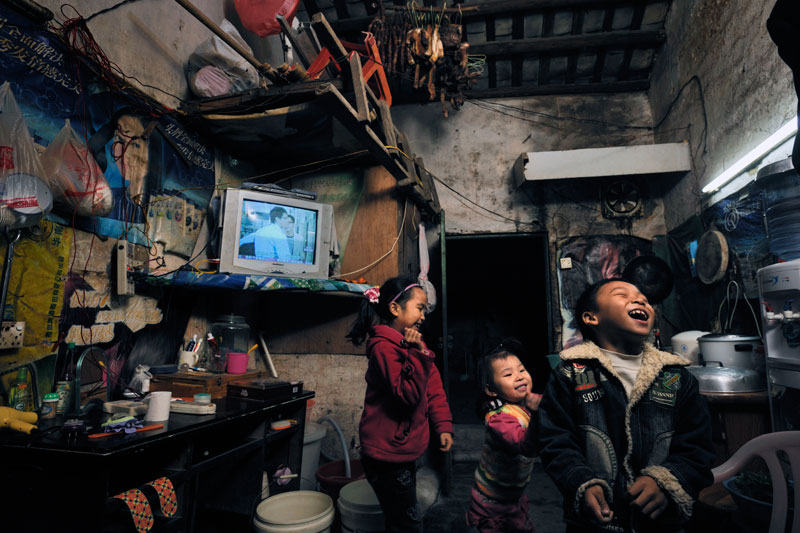 “I first visited the Shenzhen urban village of Wuwucun in 2005, and met the families from Sichuan living in this low row of Qing dynasty buildings. Most of the women made Reebok athletic shoes at the nearby Taiwanese-run factory. When I returned to Wuwucun five years later, I was surprised that these migrants were still there. Many had no intention of returning to Sichuan any time soon. The biggest difference was that they were now making New Balance shoes instead of Reebok. 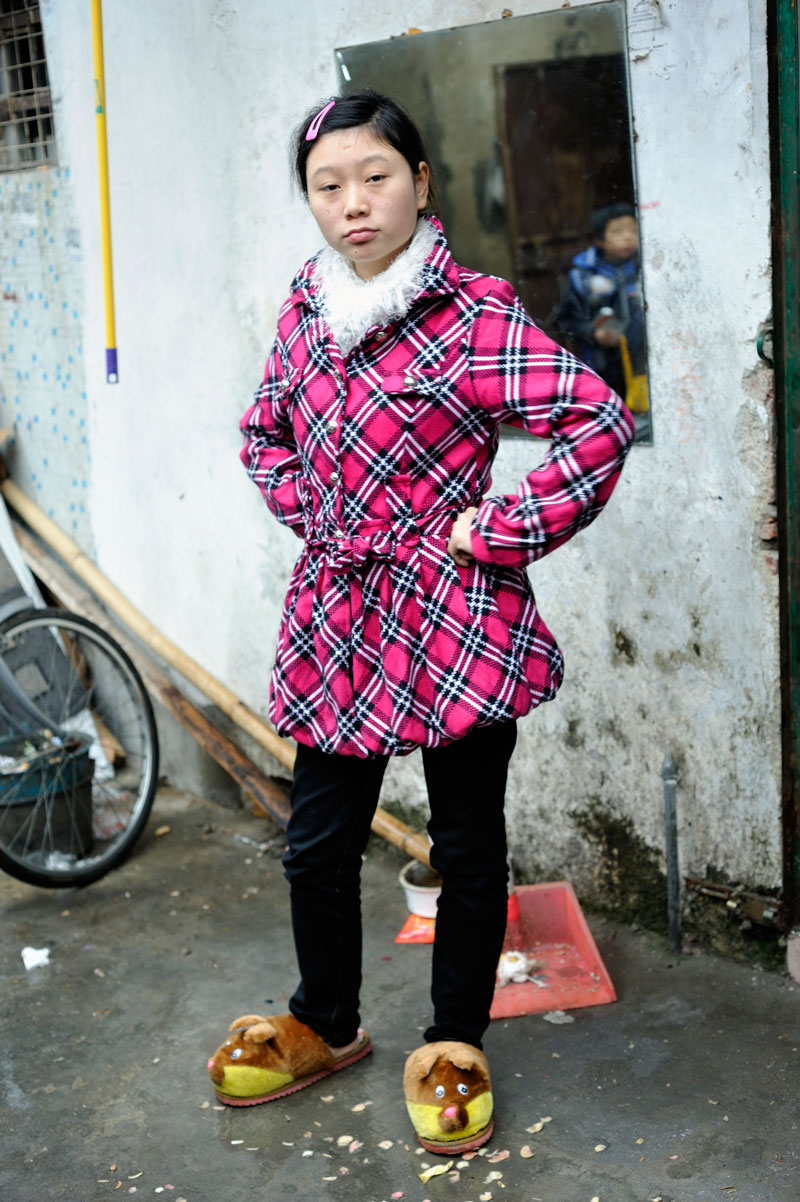 “The kids ran in and out of each others’ tiny houses, which had cheap TV sets (saving for a real apartment) and homey touches like meat hanging from the ceiling. A young woman wore her best pink coat on her day off from the sneaker assembly line where her mother also worked.” 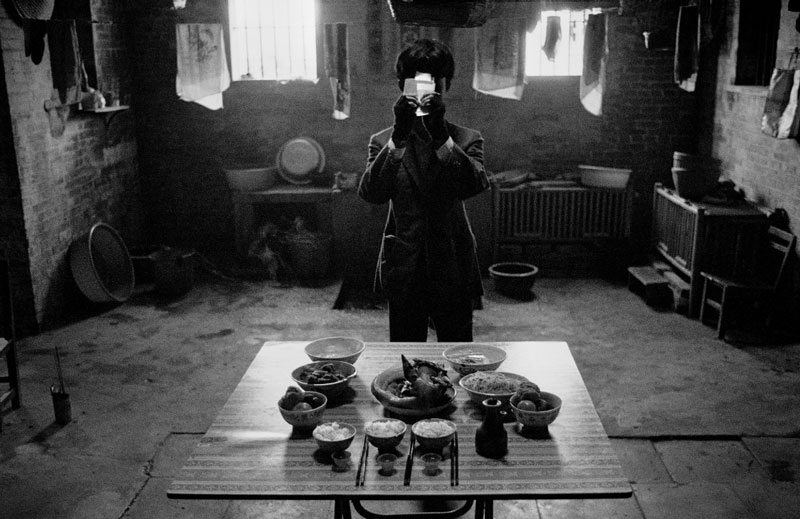 “My mother’s father built this house in Guangdong’s Taishan county with his brothers before moving to Chicago for good in the 1920s. Taishan is known as the ‘Home of the Overseas Chinese.’  When I arrived back there more than 60 years later, my cousin held my hand as he walked me along the paths between the rice paddies and through the narrow lanes of the village. He showed me a cow purchased with money sent back from the States and introduced me to his grandfather, who never made it there. He burned incense and hell money to let the ancestors know I had returned. It was a strange experience when he led me into the house of an elderly woman (whose relation to my family I’m still not certain), and once my eyes adjusted to the dark, to see photos of my Chicago aunts and uncles scattered among the other pictures on her walls.” 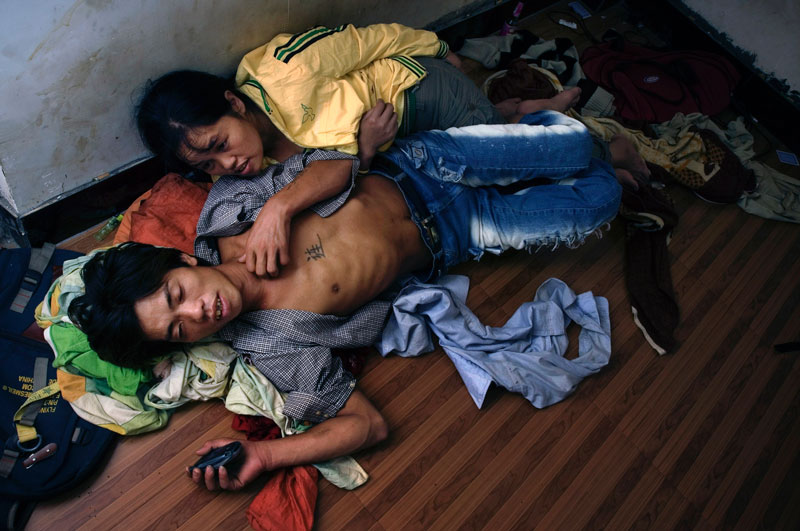 “Photography took me on many long road trips across China, inevitably driving through many places I had never heard of. The cab driver might say, ‘Oh, this is a small third- or fourth-tier city, with about two and half million people’ – which would be a top 10 city in the US, nearly twice the size of Dallas. To be sure, city populations are figured differently than in the States, but even still, it’s a reminder about the incredible speed and scale of urban growth in China. To this end, I spent a year photographing in one of these lower-tier cities on the rise:  Lishui, a big producer of man-made leather, with a new train station, a high-speed freeway to Wenzhou and a McDonald’s.

“Who builds these infrastructure milestones? People like this migrant construction worker from Hunan, shown sleeping on the floor with his girlfriend, whom he had met at their last stop on the boomtown circuit. They shared a tiny rented apartment that cost RMB120 per month with four other guys from Hunan. Lishui’s building boom included a cinema, but they and other workers were much more likely to stay in the construction zone and watch free outdoor screenings of action movies.” 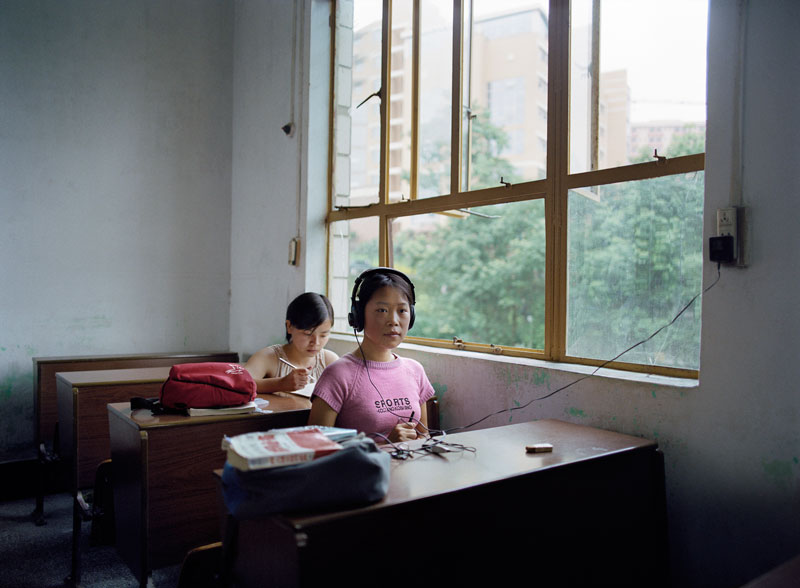 “Peter Hessler’s classic 2001 memoir River Town covers his teaching days along the banks of the Yangtze at Fuling Teachers College. Four years after leaving Fuling in 1998, he returned to give a lecture at the college about his book, which had been reviewed recently in the Chinese press. He also wanted to observe the rapid modernization of the town, as well as see the area one more time before the imminent completion of Three Gorges Dam would submerge much of it in water, ultimately raising the river level 177 meters. He wrote about this visit in Time magazine.

“I was lucky enough to be able to do the photographs for a number of Peter’s stories when he was reporting from China, including this one. Working with him was an incredible blessing, for the places and people he introduced me to and his keen insight into what he saw. It was also a giant curse, because he has the ability to find magic in the most bland, non-visual situations that are impossible to photograph as well as he writes. Fuling, however, was a great place for pictures, both vibrant and peaceful. Any problems with images like these students reviewing English tapes are the photographer’s alone.” 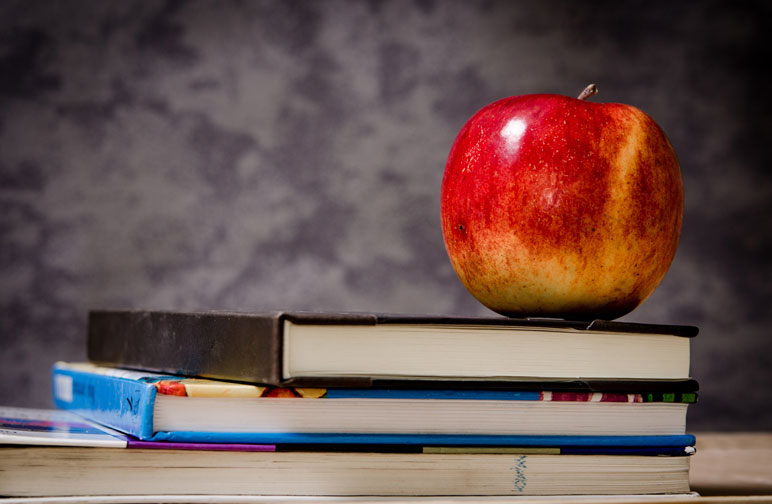