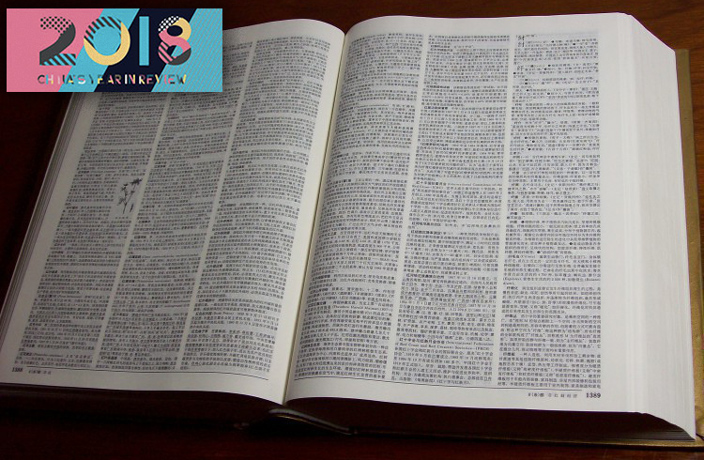 Each month, Mia Li introduces you to a trending phrase in our regular 'Chinese Urban Dictionary' series. Here's a look back at some notable highlights from the series in 2018. 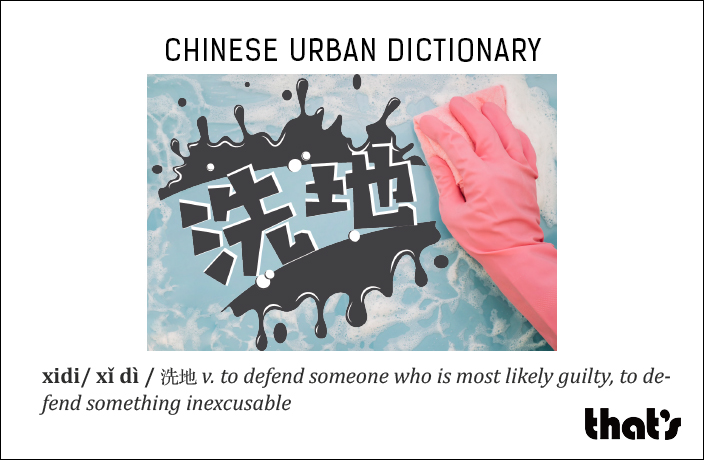 What it means: To defend someone who is most likely guilty, to defend something inexcusable.

Example:
A. I'm only saying that if I was a Wall Street banker, I’d totally grab the opportunity to make millions, too.
B. Look at you xidi for the bankers who caused the recession! How much did they pay you?
A. Would you have left money on the table, if it had been you?
B. You disgust me. What it means: Buddha-like, having no desires and indifferent to everything, apathetic.

Example:
A. Every stage in life is exhausting – doing well in school, finding a job, buying a house. I'm stressed out just thinking about it.
B. I know. Fo xi is the only way to go.
A. Agreed. Let's just go take a nap. What it means: A product that has been bought by many people and can be seen everywhere; something ubiquitous.

Example:
A. Look, I just got the new iPhone!
B. You’re still buying iPhones? How pedestrian. They are the baokuan of phones.
A. Well what phone do you use?
B. I don't use one. People have to fax me. What it means: To self-deprecate, to put oneself down.

Example:
A.You have so many friends. Must be nice to be popular.
B. I'm sure my parents pay them to hang out with me. Haha.
A. So do my parents, but no one wants to take the payment. Haha.
B. Is this a zihei competition? 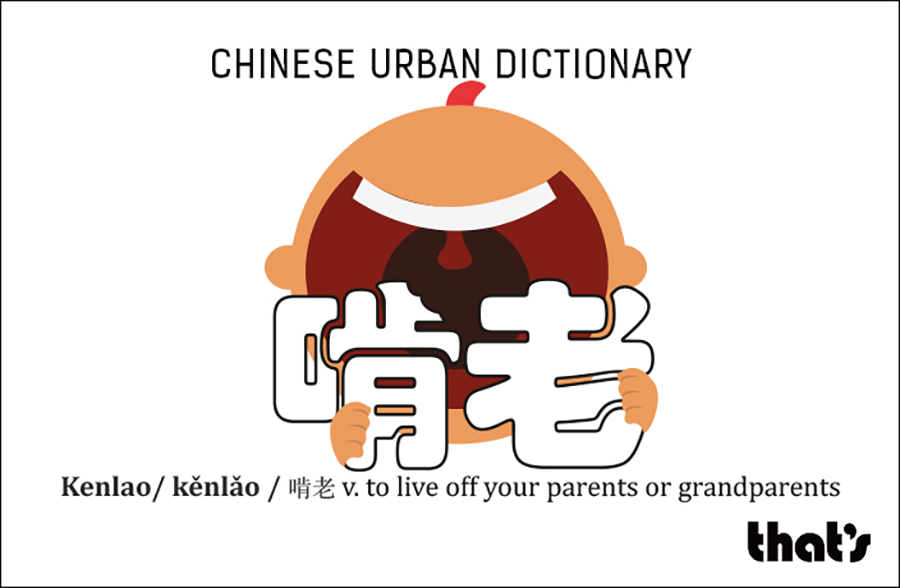 What it means: To live off your parents or grandparents.

Example:
A: What do you do?
B: I'm trying to gain a following on Youku so I can become a professional Youku'er.
A: Who pays your bills?
B: My mom.
A: So you kenlao full-time.
B: Yes. 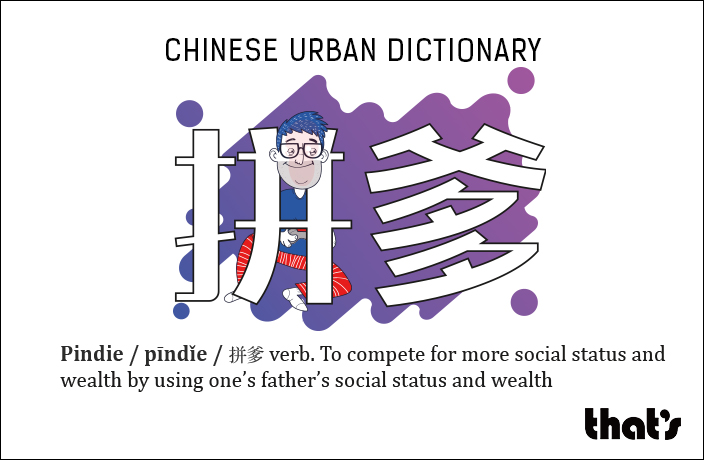 Example:
A: Look at Little Zhang. He is the CEO of a big company at the age of 26.
B: Look up who his father is and you’ll understand.
A: Oh, wow, he is winning the game of pindie. 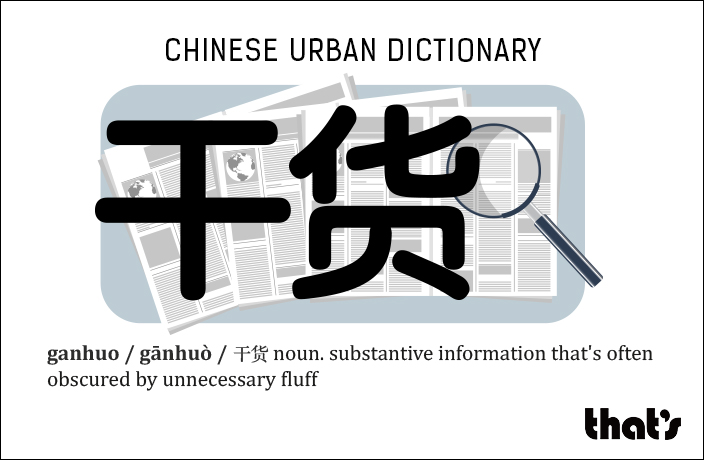 Example:
A: Did you read the annual report Jeff submitted yesterday?
B: Yeah, it's full of clichéd slogans and empty words. No ganhuo.
A: That's because he's trying to hide the fact that he hasn't done anything all year.
B: Damn, I can relate to that. 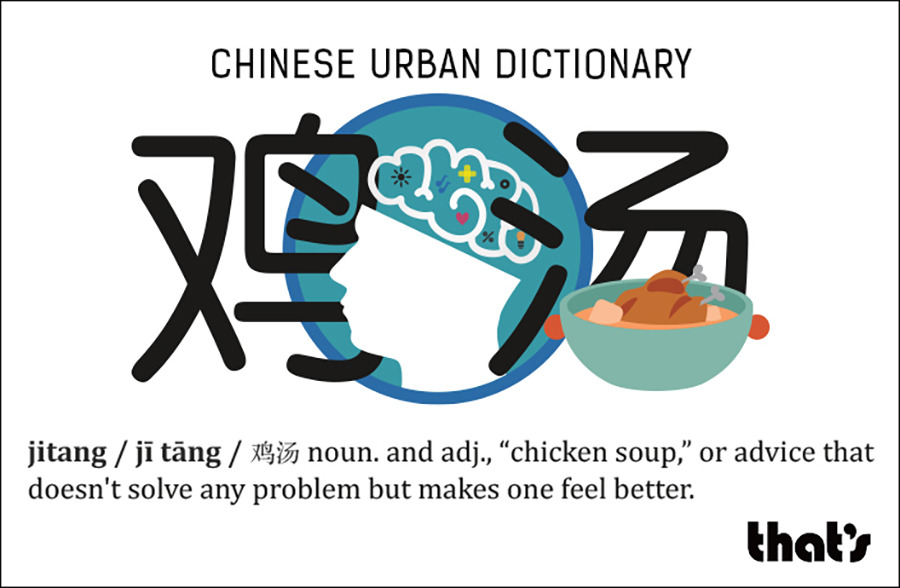 What it means: “Chicken soup,” or advice that doesn't solve any problem but makes one feel better.

Example:
A: Come out drinking with us!
B:  I can’t. I have a huge project and I need to stop procrastinating
A: No you don’t. You just need to stop and smell the roses.
B: Stop feeding me jitang. Don’t you have any real advice?

Example:
A: I love visiting the jianbing stand on my street corner every morning.
B: Jianbing are super oily and bad for you. You may as well just drink oil.
A: I don't want to argue with you if you are going to be a gangjing. Whatever you say is right.
B: It's impossible for whatever I say to be right all the time. You are wrong again.
A: Whatever, bye.

What it means: To spend a lot of money playing a game, or on in-game purchases.

Example:
A. Ah that guy just killed me! I didn't do anything to him. Why?
B. Because he can. Look at all the weapons he has. He is a kejin player.
A. But I want revenge!
B. Then you better kejin too!

What it means: To use cheat codes in a game, to excel so much it's like you're using a cheat code.

Example:
A. The CEO of this billion-dollar company is only 22 years old.
B. I’m the same age but I’m broke.
A. He must know something we don’t.
B. What a Kaigua life he has. We’ll never get to his level. What it means: Idol, a celebrity, usually an entertainer that one approves of and supports at high cost.

Example:
A. My Aidou is the most handsome of all.
B. He is such a shallow human being. Nothing but a pretty face. At least my Aidou has talent.
A. He has to with that ugly face.
B. Get out. 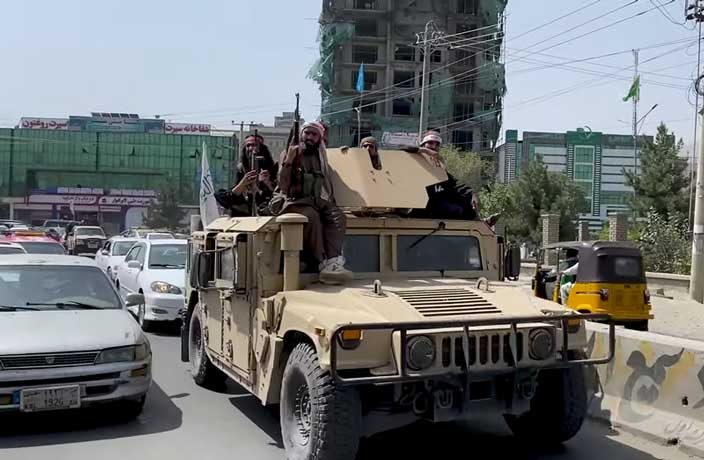