China reportedly has 200 million people, or 14% of its population, who are single, Xinhua reports.

The hashtag #中国超2亿人单身# (Over 200 million people in China are single) took the top spot for trending topics on the Chinese internet today.

One of the top comments noted, “Being single is sometimes an awakening. Marriage for the sake of marriage is never what I want. Some are icing on the cake. No one can live freely.”

A popular tech blogger on Weibo gave a fairly profound breakdown of the phenomenon in China. They posted, “There are many reasons why more and more Chinese people are single, but it can be summed up to these few [reasons].” 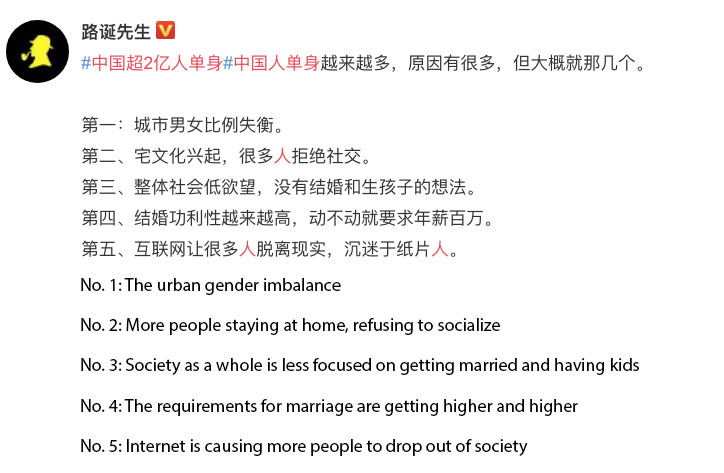 Statistics show that in first-tier cities, 40% of young singles are living in a ‘moonlight’ stage of life as they spend more money on themselves.

As the tier of the city lowers, monthly income decreases and the proportion of ‘moonlighters’ actually increase significantly.

A Xinhua article claims that single people are more willing to spend money to be ‘spiritually fulfilled.’ For example, a single Gen Z girl in Hangzhou went on a blind date for her cat and spent RMB10,000 to buy high-end pet supplies as a ‘dowry’ for her cat.

Businesses are taking note and changing their business models to accommodate this emerging market. Fitness, tourism, cosmetics and pets are key industries to watch in this space.

Single-person dining tables, isolated from others, are popping up more and more to attract customers.

From a worldwide perspective, Europe actually has the highest percentage of one-person households (OPH), with figures as high as 20-40%.