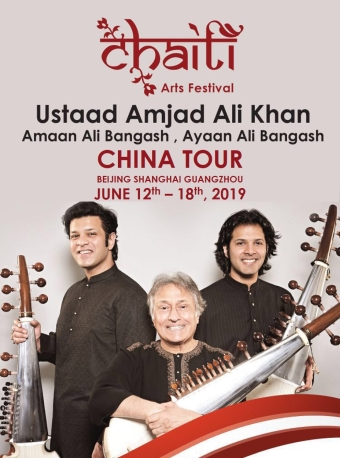 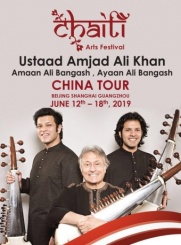 Indian music is always in tune with nature and the seasons. The pulse of India throbs in its culture, heritage, philosophy, music and its dance. It is in this realm of living that India exposes herself, without consciousness. Its music is part of the society; it has adorned the courts of the kings. But it has never entirely forgotten its spiritual origin and nature. No doubt, music reflects the heart of India. Indian classical music has evolved from the country's different races, cultures, legends, mythology and ethnicity and has played a key role in defining the South Asian identity.
CHAITI ARTS FESTIVAL is an effort to showcase the rich musical & cultural heritage of India. Initiated and organized by CHAITI ARTS FOUNDATION, a non-profit organization based in Shanghai
For CHAITI 2019, the renowned Indian Sarod Maestro Ustad Amjad Ali Khan, Amaan Ali and Ayaan Ali will be the lead artists accompanied by Satyajit Talwalkar & Parthasarathy Sridar on the Indian percussion instrument T