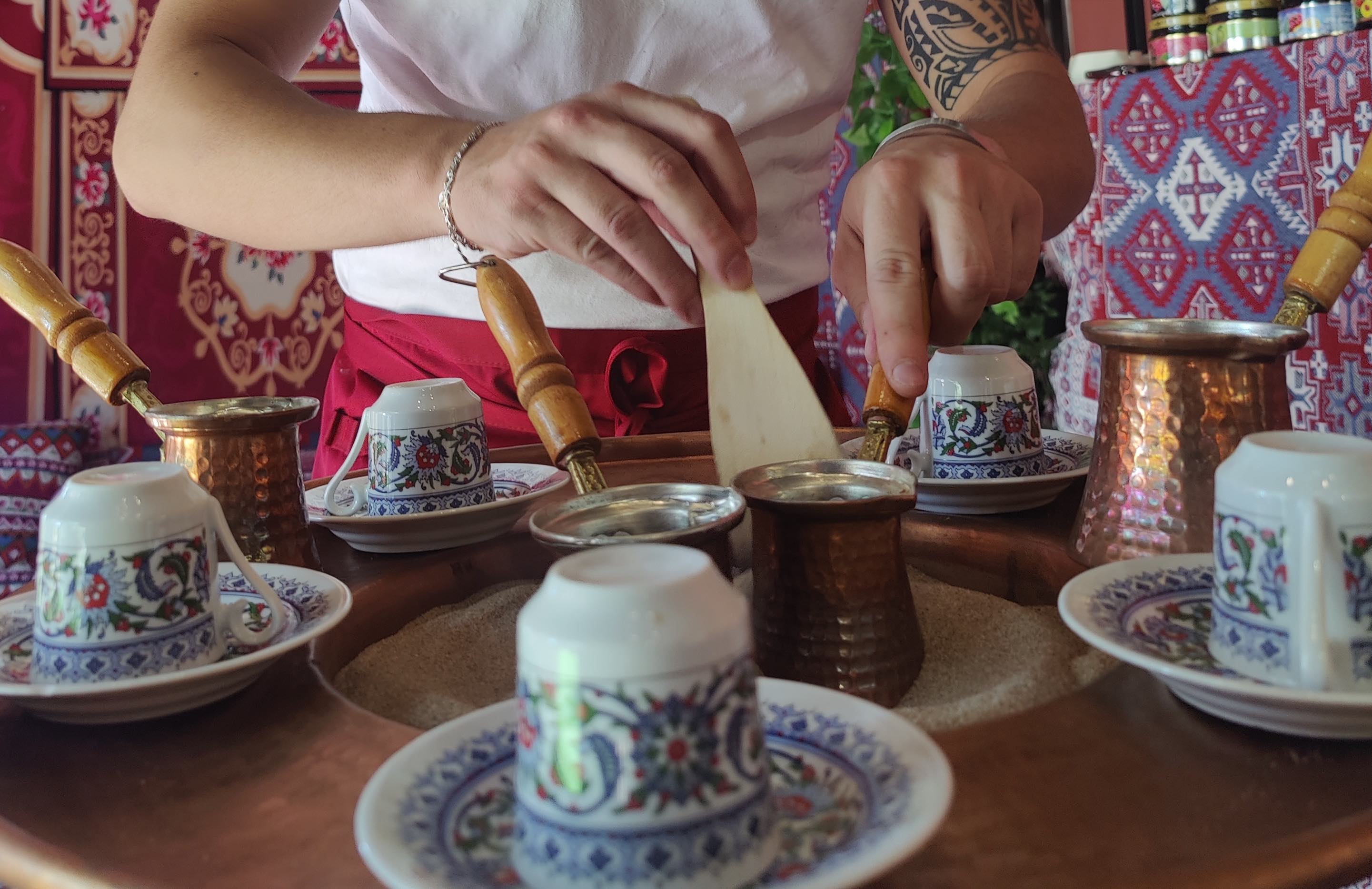 As a beach resort popular with the rest of China and annual winter visitors from Moscow, Sanya has been the most international city on Hainan Island for a long time now. However—in terms of a non-transient long-term foreign population—the provincial capital Haikou has it beat all to pieces. This is particularly reflected in the recent, surprising explosion of Turkish restaurants and cafes.

Starting in December 2019 with the Turkish owned and operated Turca and including the two that fell to the restaurateur's make-or-break first year curse, there have been a total of seven Turkish cafes and restaurants popping up in the city. The five currently operational ones all look poised to keep going strong. When one is talking about niche foreign cuisines which are unfamiliar to the average Chinese consumer, I don’t hesitate to say that even major international cities like Guangzhou or Beijing might have trouble boasting numbers like that. 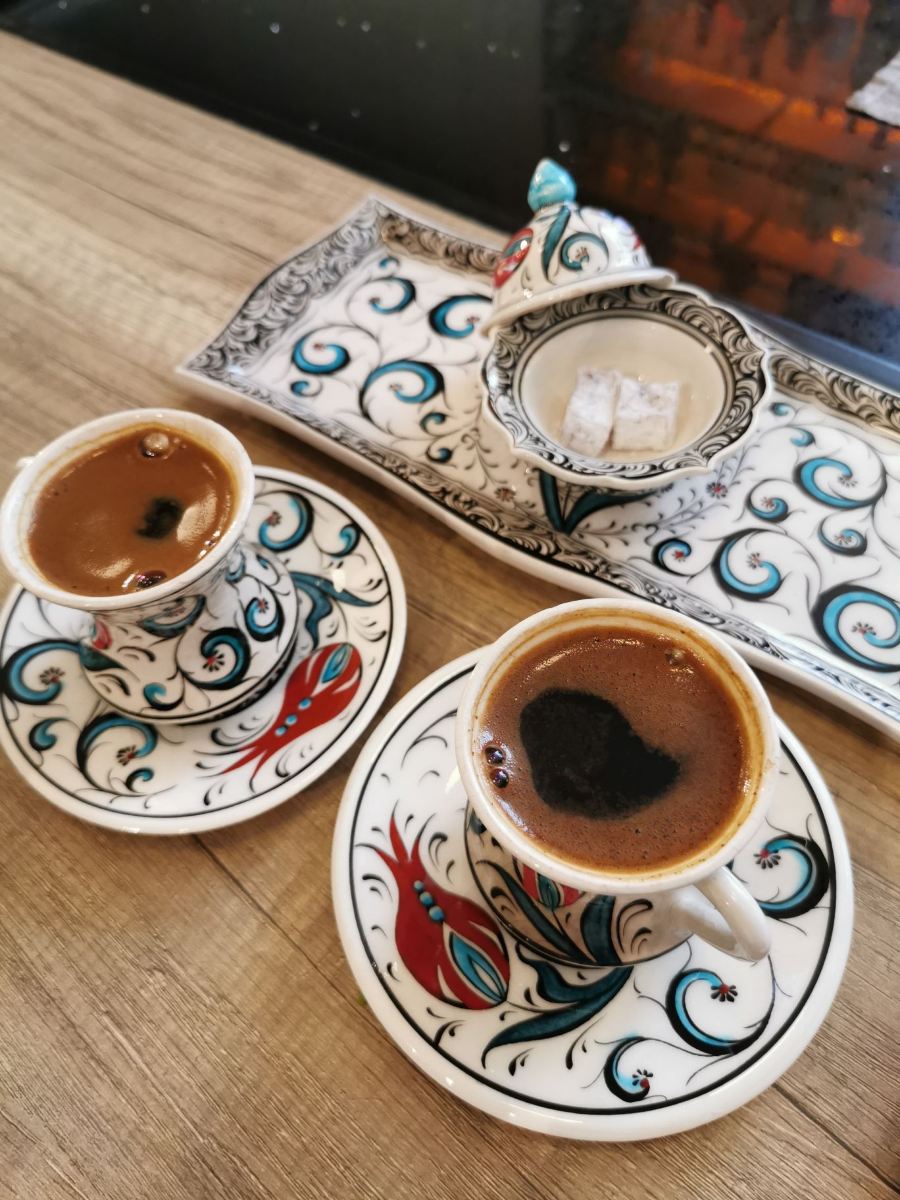 Currently showing up on Dianping as the best cafe in Haidian district and one of the top ten cafes in the city, Turca runs on the concept of doing one thing and doing it very, very well. While ‘finding the thing you love’ and making money from it is not something that works for every business owner, it’s definitely working for Turca’s owner Hakan. As a successful businessman in another completely unrelated field, he has a huge advantage over most foreign restaurants in that he simply doesn’t need to care if consumers think the Turkish coffee too strong or baklava too sweet.

From the original drinks menu to the pide and advanced-reservation, full-dinner menu, absolutely no concessions have been made to ‘Chinese-ify’ the flavor.

Decoration is on point. Background music is Turkish. Staff is attentive.

If you aren’t planning on going to sleep any time soon, we highly recommend the Turkish Coffee. It’s served traditionally – ‘as dark as night’ and ‘as thick as mud’. It comes with an accompanying plate of Turkish Delight or candied almonds as a sweetener to hold in your mouth as you drink the coffee. 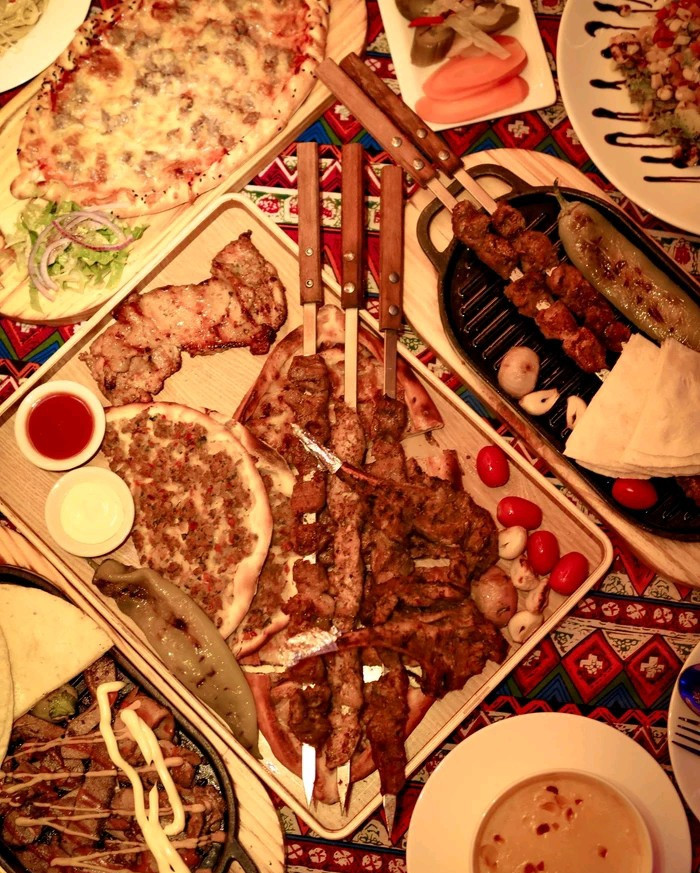 Supposedly an upgrade over the Captain Turk kebab and wrap shop that used to be in Haikou’s Guomao, Romantic Turkey is very popular with the Chinese Instagram set and others whose main purpose in eating out is taking pictures to post on their socials. The main feature of this restaurant is a bellydance show held every evening during dinner. Be aware that unless you get a reservation, tables that overlook the show area are nearly impossible to secure. However, we’ve seen much better bellydances everywhere we’ve ever seen it so, if you can’t get one of these, don’t stress.

As with Turca, the restaurant is tucked away in one of the city’s backstreet villa areas. If you come by taxi, the compound security guards will not let you drive in; some people have also reported that Didi have also been stopped. It’s not that far of a walk from the entrance, and the Maps location pin is sufficiently accurate to find it without too much trouble.

Assuming they currently have the menu item you’re ordering, the quality of the food is comparable with the price, which is about twice what you would expect to pay for dinner at most restaurants in Haikou. Unfortunately the portions are small, and many foreigners have noted that the service is—at best—slow and spotty.

Worth going to at least once, I'm not sure I can recommend going back a second time. 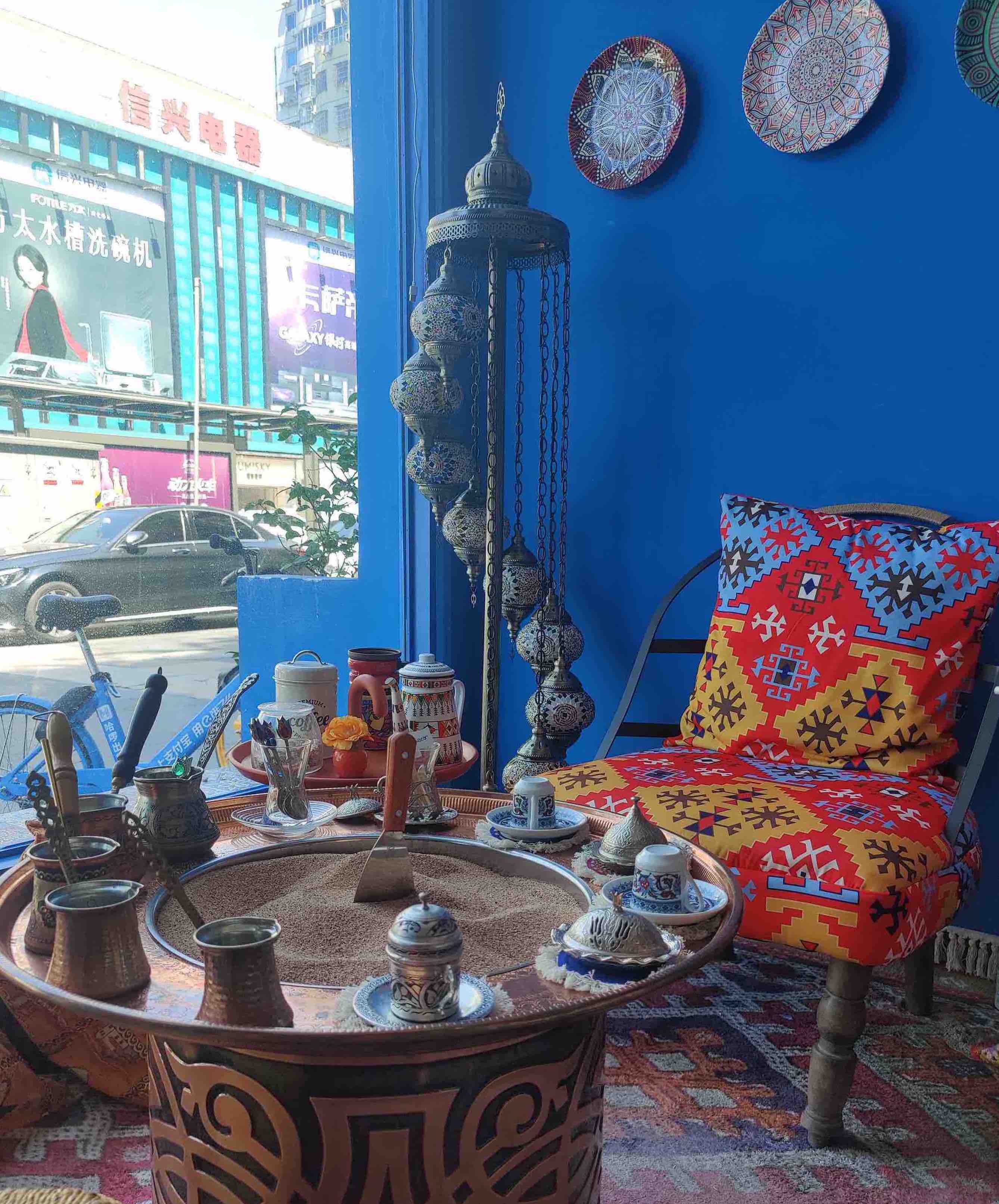 We don’t know how this Chinese owned Turkish cafe at the intersection of Yusha Road and Longhua Road managed to get such a prime location. We’re really hoping that the rent doesn’t break the bank, because we absolutely love Nazar, and we want to see it stay around for a good long time!

Billed as a ‘Turkish Food Bar’, Nazar is more of a drinks and light snacks type of place. We expect that waimai of their very reasonably priced lunch sets (RMB 30 for a chicken wrap with soda) will be the mainstay of their business. 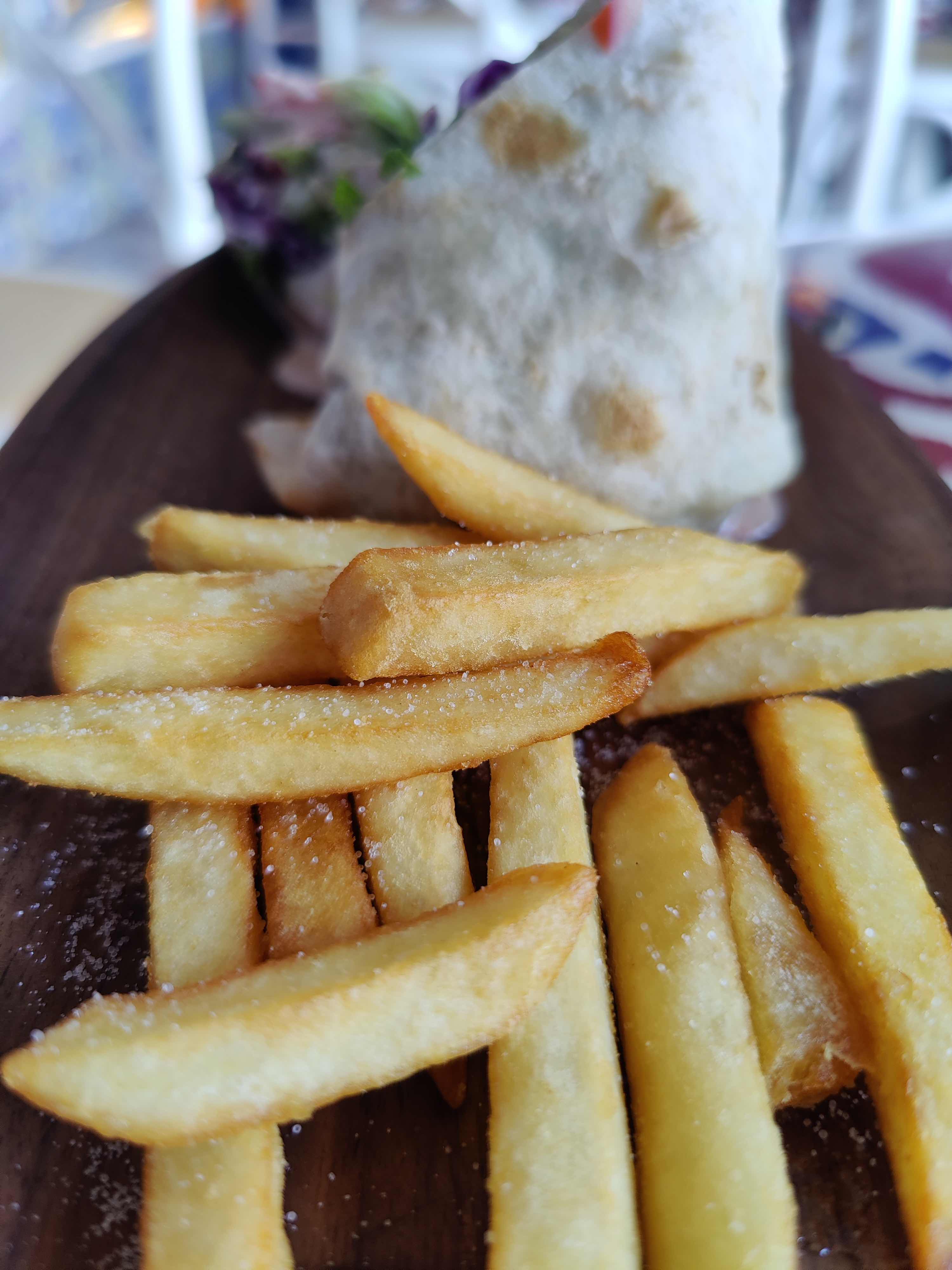 With only four small tables and a collection of floor pillows scattered around a Turkish Coffee sand burner, Nazar probably isn’t someplace that you want to come with a laptop for a day of remote work. But everything about the place is very, very pretty and we think it would be an awesome location for either a date or an afternoon caffeine break. 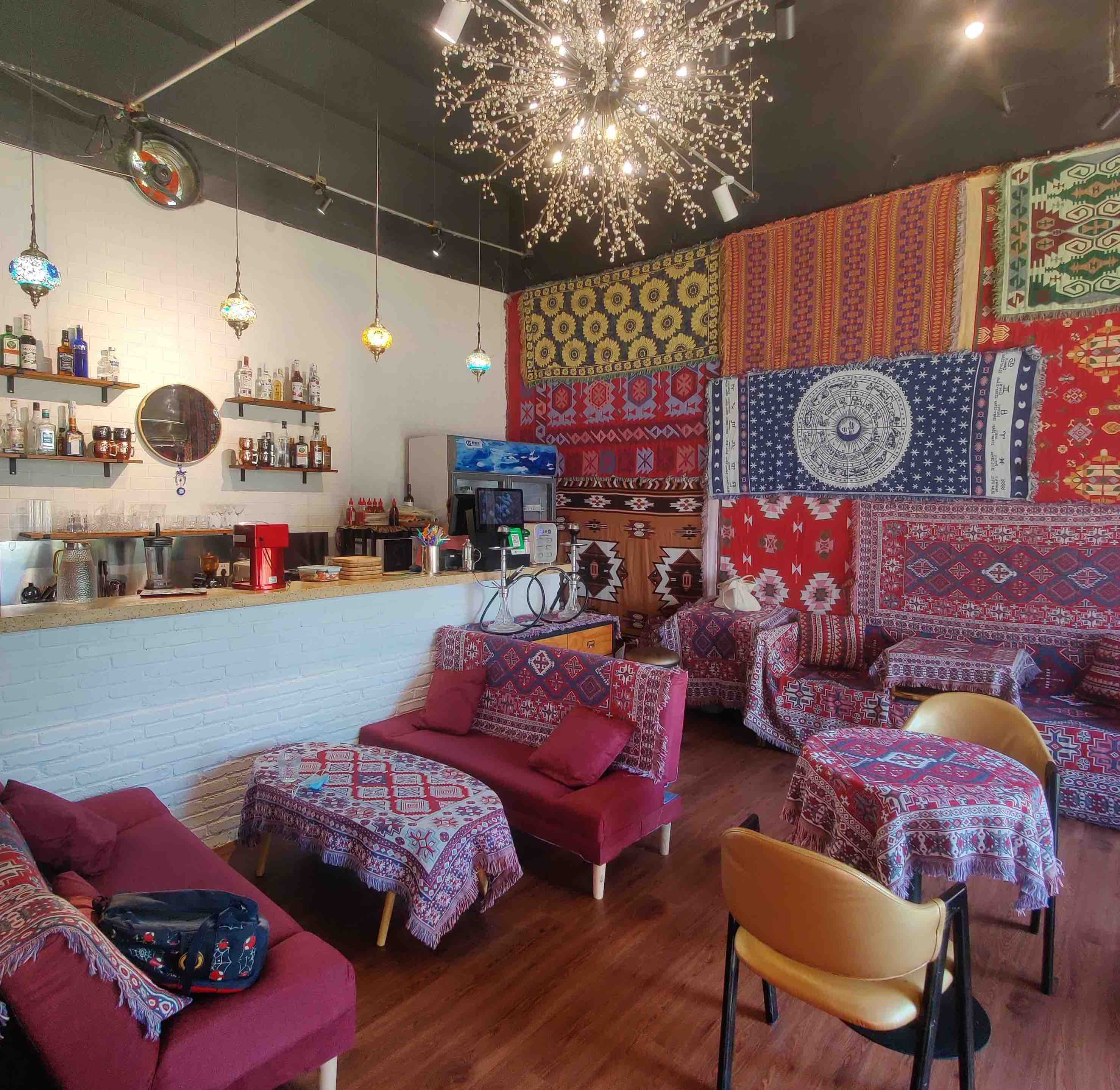 As it was the cause of owner Burak’s decision to open Cappadocia, we all need to thank the official who refused to give him a Residence Permit for Work when he came to Haikou after three years of food service work in Shenzhen.  Easier to find than either Turca or Romantic Turkey, Cappadocia isn't as conveniently located as Nazar. It does however have plenty of seating and a policy of staying open late to accommodate any customers who aren’t ready to leave yet. This is matched by an opening time that is really only a very strong suggestion. If you plan on hitting the clubs in the evening, this would be a great place to stop with friends for a bougie coffee or snack. 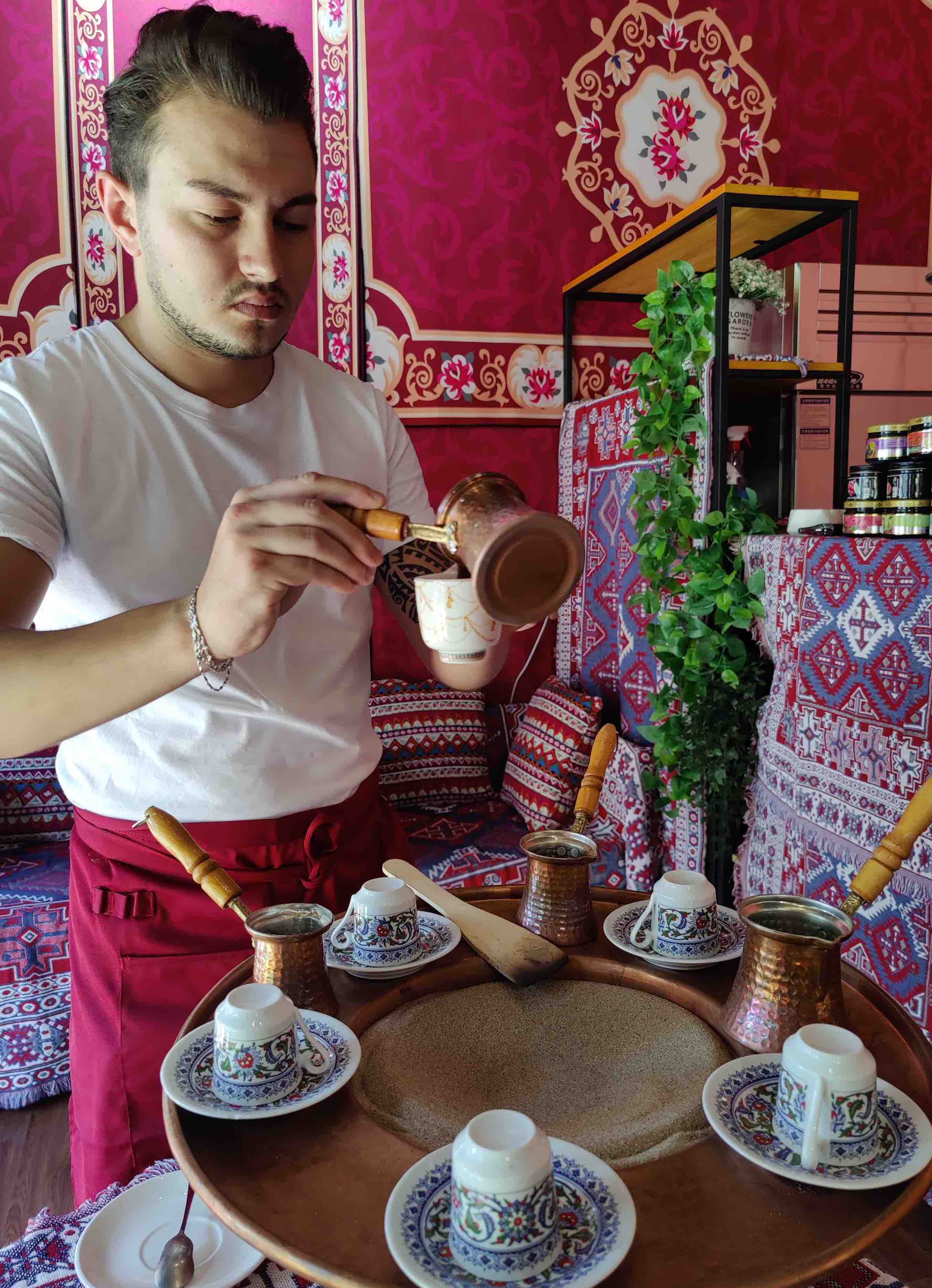 The current menu is limited to things that can be made in a cramped Chinese kitchen with little plan for expansion at this location. If things go as planned, by this time next year, the owner is hoping to open a full sized Turkish restaurant in Sanya.

Although I haven’t tried it yet, I’ve heard nothing but good things about the steak. Located in a permanent multi-restaurant space on the north side of the market south of Hainan University, Adler has a wider range of opening hours than the market but that still doesn’t mean being able to suddenly satisfy your 3am urging to get kebabs after you’ve been drinking. I want to say that it's a good opportunity to cheaply satisfy your cravings for Turkish-ish food but it's about as far from Turkish as you can get while still putting the name ‘Turkish’ on it. 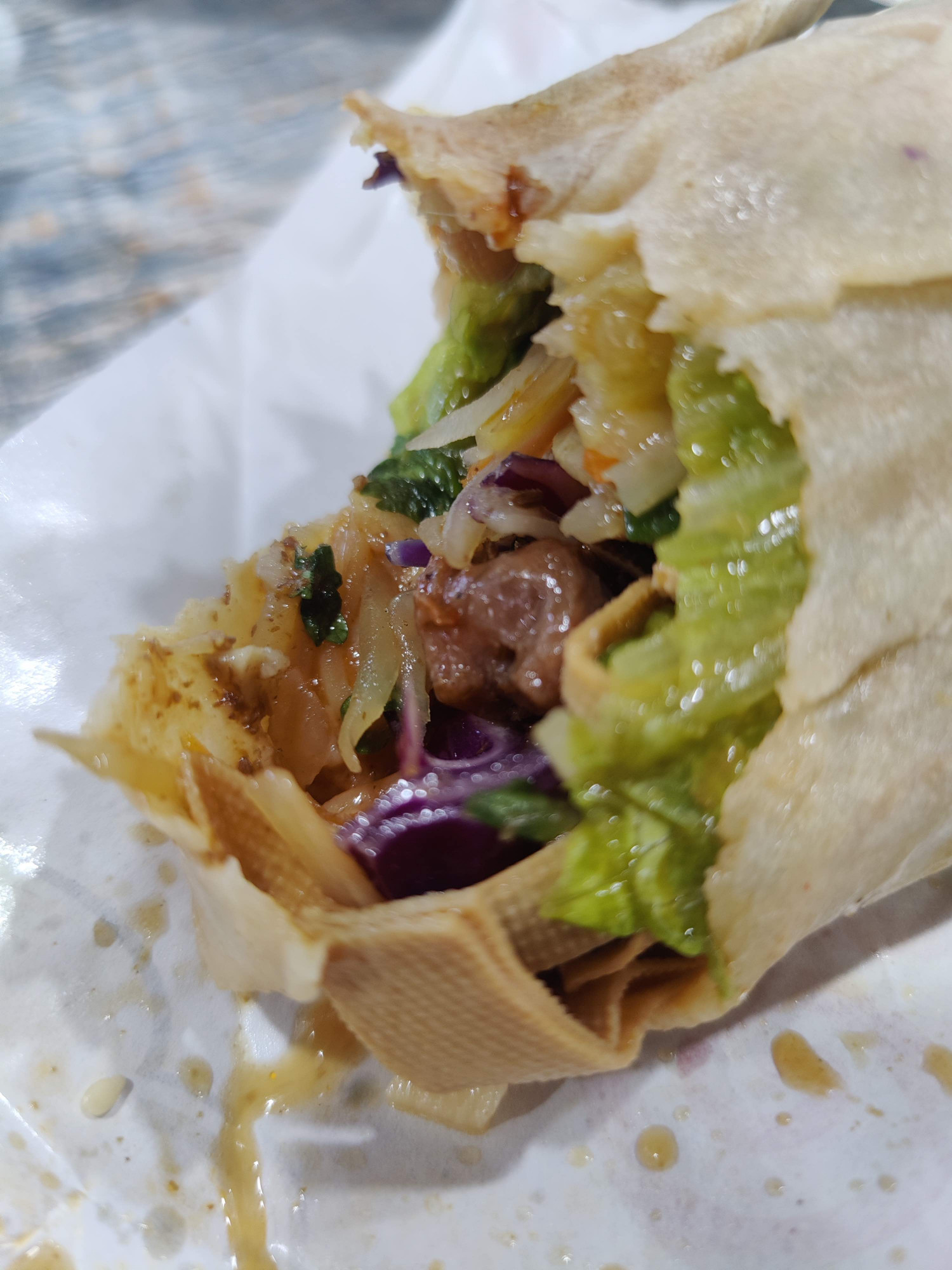 The dried tofu strips and shredded potato give it that superficially Chinese sort of je ne sais quoi.

A translator living in Hainan for17 of her 19 years in China, Marian Rosenberg is best known for her annual cycling trips through rural China. These trips not only have her blogging on Cycleblaze (username: brucianna) and helping people out on the Travel in China During Covid groups (Cyclist Translator), they've also landed her in the Washington Post's travel section and are the reason she has more than 40,000 followers on Douyin (我是凡一).

There are two days left to enjoy this quick deal from Yuhualin Hong Kong Traditional Refreshments.

Time to dig into delicious food at Hookah Bar.

FREE Shot at this Party + 18 Other Events in Sanya

One free welcome shot when you prove your loyalty to That's Sanya.