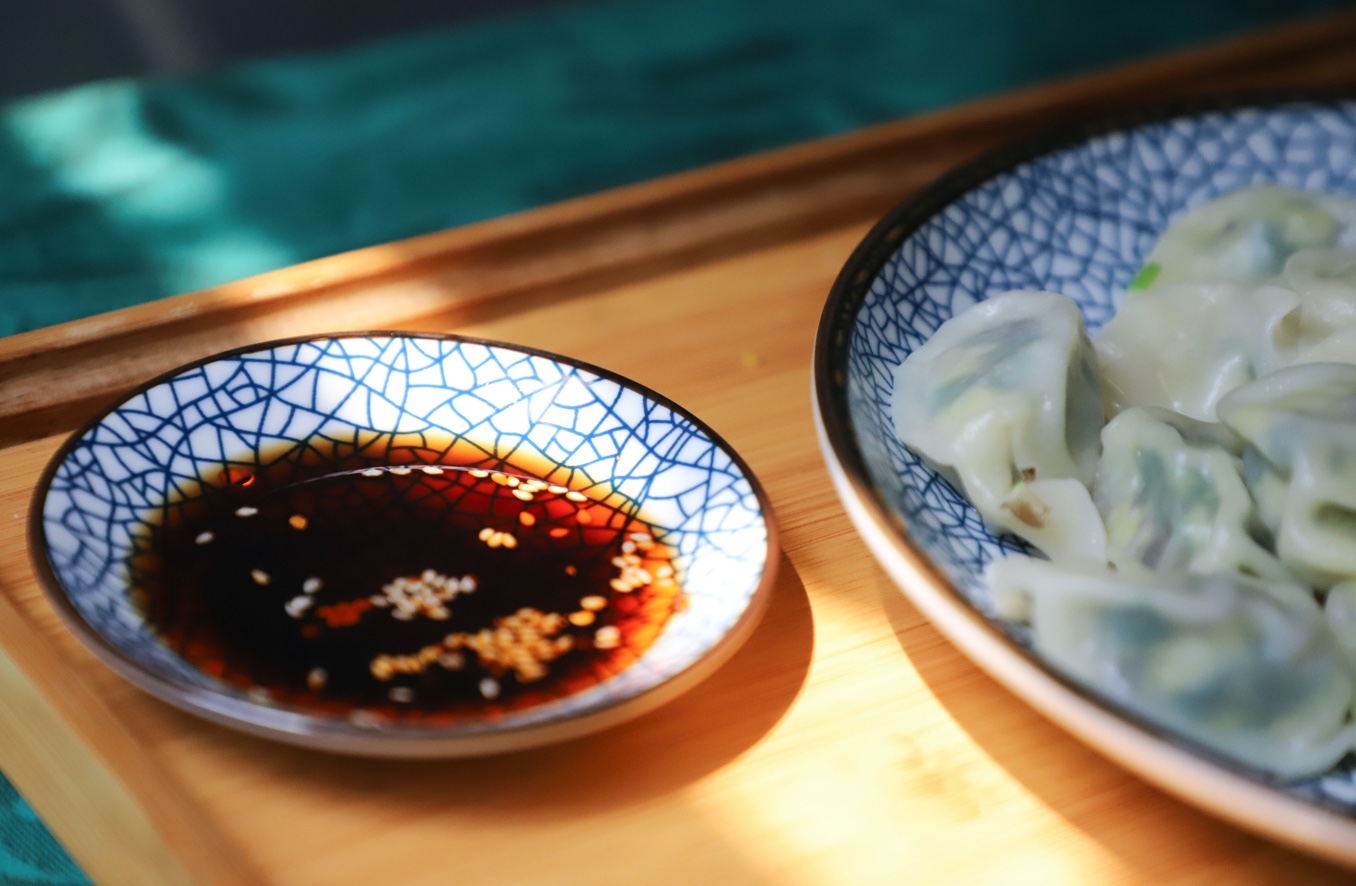 With Spring Festival upon us, you may rightly be looking for an elite eatery to dine on dumplings. Here are four of our favorites: 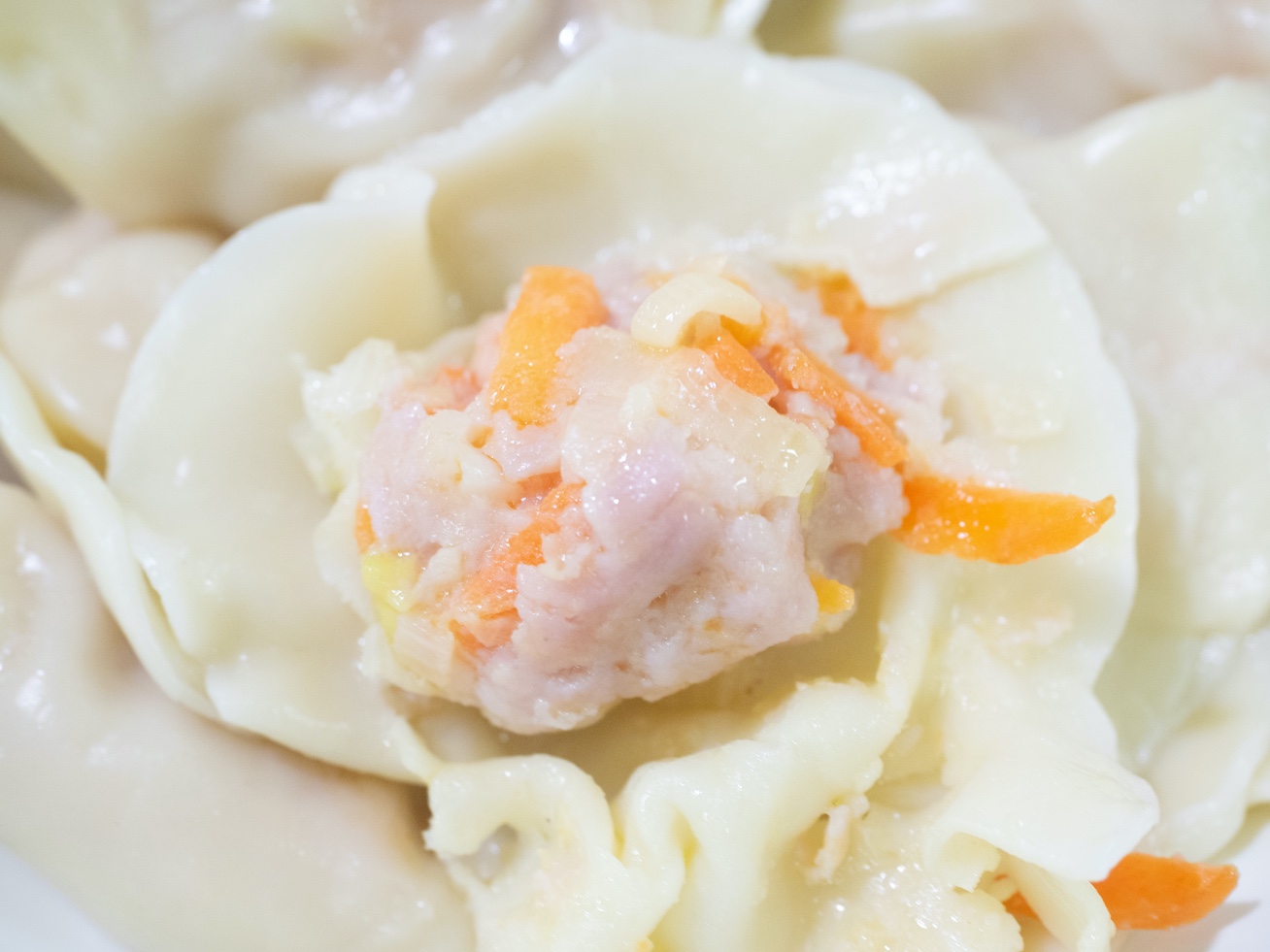 On both sides of a backstreet in the Wuyangcun area, Ju Rong Dumpling Shops greets visitors with its catchy green sign and bright red Chinese characters, bustling with a motley crew of Cantonese old-timers, students, white-collar workers and a food delivery squad. For over two decades, the yellow board serving as its menu has faded and the price tags have been scraped and relabeled more times than we care to count. The long queue that snakes away from the restaurant’s entrance each evening at dinnertime is evidence of its popularity, which can be largely credited to the toothsome array of dumplings served here. Beef-filled dumplings are a hot menu item, having sold out by 7pm on the evening we visited. The Chinese green onion and pork dumplings, though, are not a lesser option and were worth every minute we had to wait for a seat. Patrons can concoct their own dumpling dipping sauce using chili paste, mashed garlic, soybean sauce and black vinegar. Additionally, for those looking to cook their own dumplings, a store next door sells ready-to-cook dumplings. 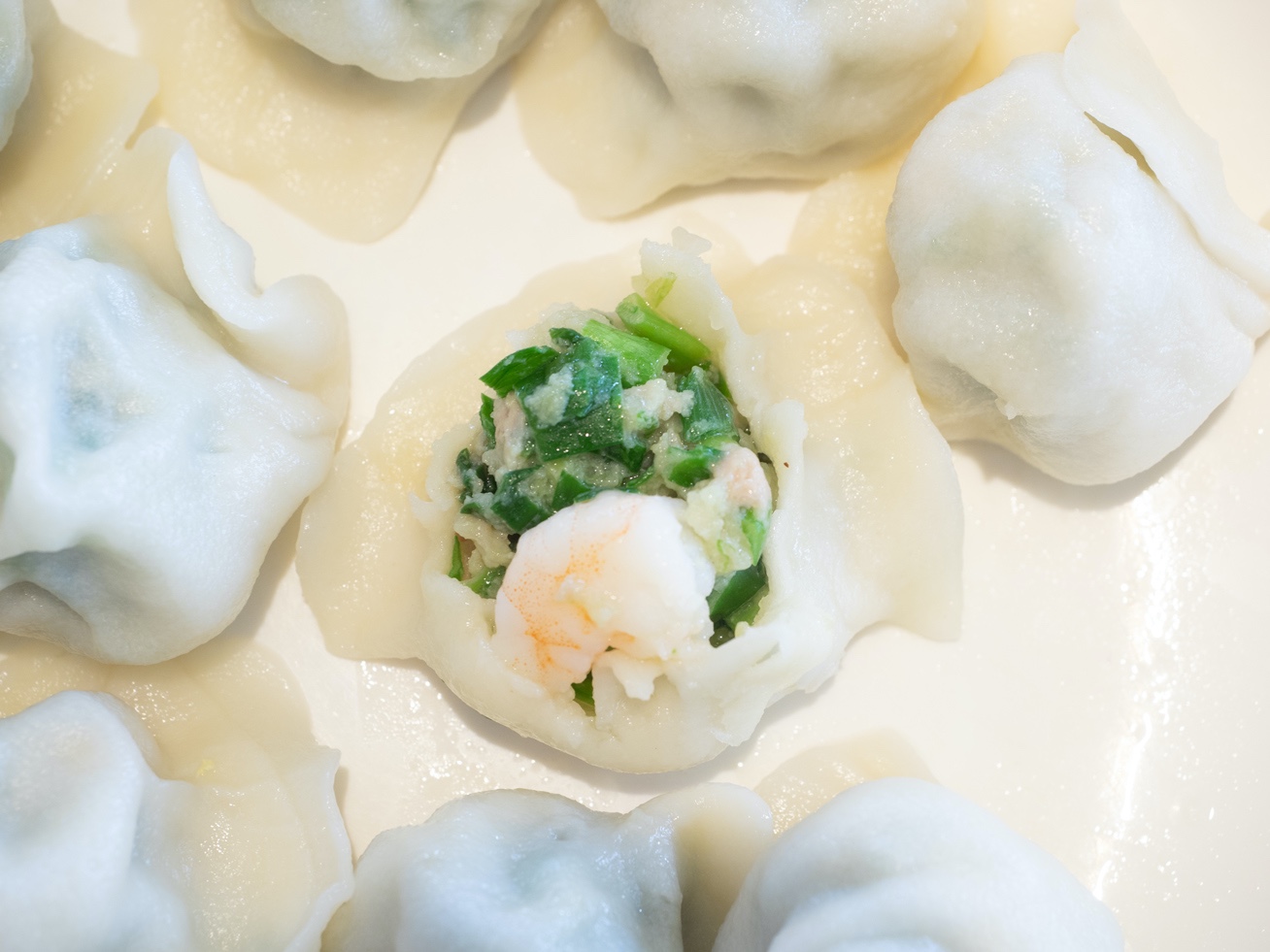 Along the wall in the stairwell leading up to Manchurian 1993, photos of celebrities kickin’ it with staff from the restaurant’s numerous chain locations across China are proudly displayed. The restaurant specializes in unpretentious cuisine from China’s Northeast, including stewed chicken and mushrooms and vegetables and pork in tofu wrappers. On its bilingual Mandarin and English menu, diners will find dumplings with typical fillings such as egg and squash, celery and pork, Chinese chives and pork, beef and lamb. One notable special on the menu is the meat and veggie dumpling platters, which come with an assortment of dumplings with different fillings. Our top pick, though, is the unique chive, egg and shrimp dumplings, which are succulent and well-portioned. 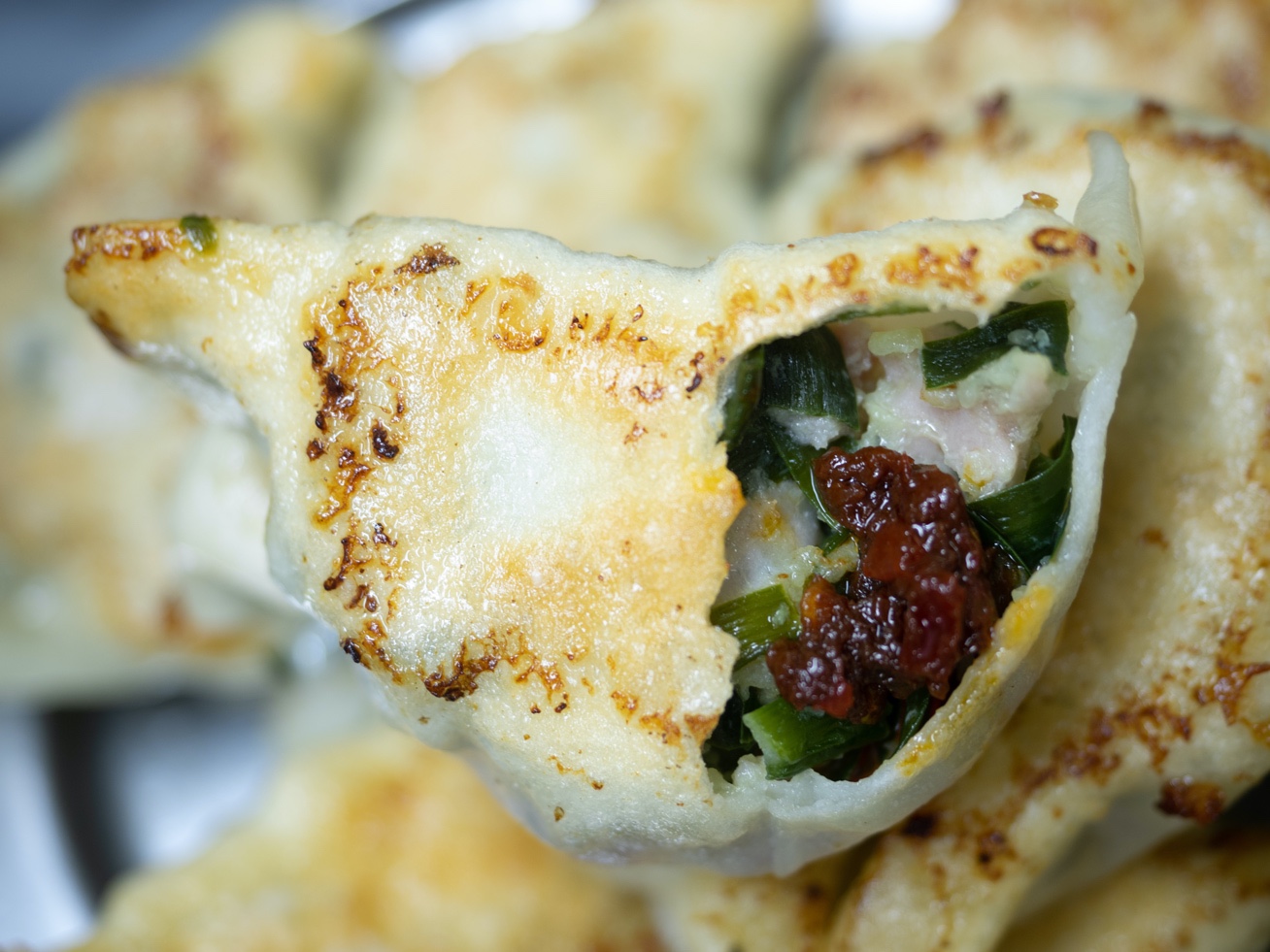 Fenfang Tianpin began its days as a Cantonese dessert and snack food shop in Guangzhou’s Haizhu district in 1982. Since then, the shop has expanded and opened several other locations across the city. Among its glorious selection of menu items is the glutinous tangyuan, ice cream with mango and pomelo, the locally famous ‘double skin’ milk and almond cream. There’s also the highly sought-after fried pork and Chinese chive dumplings, which are a must order. What gets us hooked on Fenfang’s fried dumplings is the generous filling and pleasant flavor when eaten with the house-made chili paste. Pair the dumplings with a mango tapioca to combat the oft-unpleasant odor of Chinese chives. 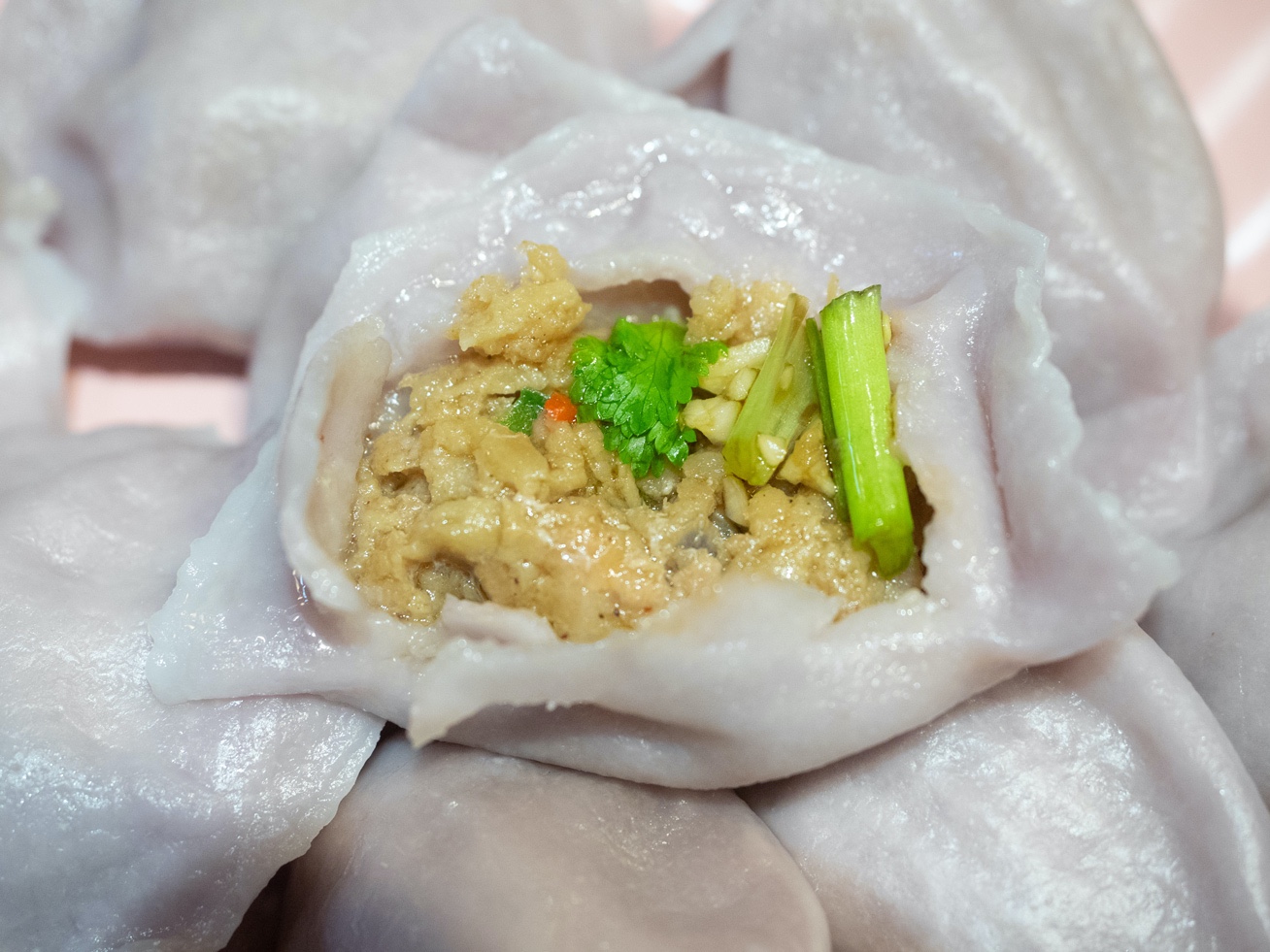 Located near Tiyu Xi Lu is a warren of streets lined by a diverse array of Chinese, Japanese and Western eateries soliciting patronage from the young and hip. One such restaurant is Zhu Jiao, or ‘cooking dumplings’ in English, which dishes out distinct dumpling variants, including an eggplant version in a purple wrapper and a green-skinned cucumber variety. The restaurant’s unembellished menu also includes several typical Northern-style appetizers to prep your stomach for a session of dumpling devouring. Low-profile and cheaply decorated, the family-run shop sells dumplings at reasonable prices. Diners are also able to prepare their own dipping sauce at Zhu Jiao’s condiment stall, which offers cilantro, a sesame sauce, smashed garlic and chili peppers, among various others. 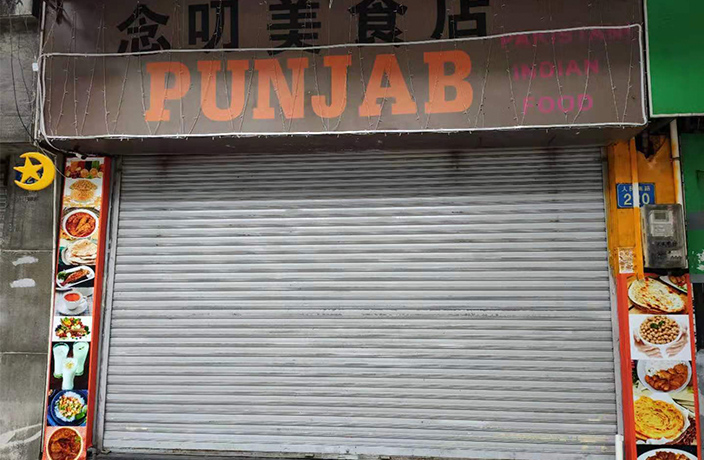