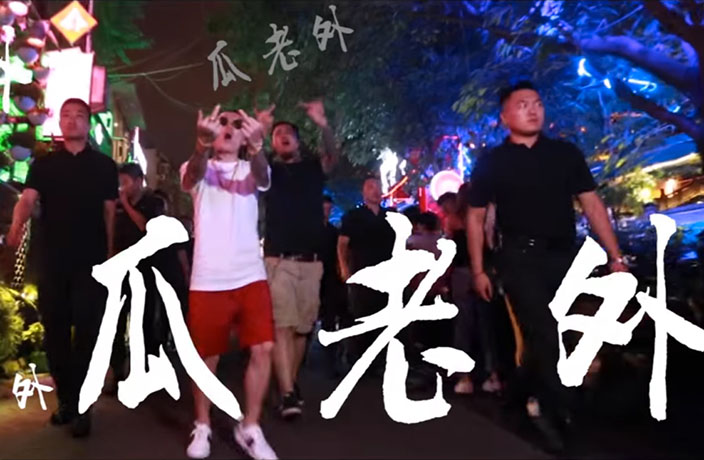 Sichuan rapper MC Fat Shady has released a new NSFW(ish) music video calling out "stupid foreigners" and telling them to "f*** off."

Throughout the slang-ridden, expletive-laden video, the rapper repeatedly uses the phrase "瓜老外" ("gua laowai," stupid foreigners). ("Gua," which roughly translates to "melon," is a common insult in Chengdu dialect).

A disclaimer of sorts appears at the beginning of the Youtube version of the video: "你该搞清楚, 外国友人, Respect, 瓜老外, NMLP." That roughly translates to: "You should be clear: Foreign friends, respect. Stupid foreigners, your mom's c***."

In various shots, Fat Shady flips the bird to the camera while walking down a busy bar street, sitting in front of a giant Tiffany's ad with a masked dog and surrounded by his buddies, dancing in a showroom filled with imported luxury cars and test driving one of them.

At one point he tells laowai they can clean his (American-made) Timberlands:

The video finishes off with him knocking a mannequin's head off with a baseball bat. The phrase "stupid foreigner" has been spray painted on the mannequin's chest.

Rough translation of the lyrics (via Redditor drilldor):

There are all kinds people in them. To make money, they know everything a little

All the tall guys are models

They never nitpick as long as they have girls to chase after, anyway some girls always like to give themselves freely to them

I was willing to respect foreign friends,

But stupid foreigners, your mother's c***

I have to emphasize it thrice,

That stupid foreigners, your mother's c***

What would you pretend to be be the day after tomorrow?

You pretenders come here to wash my car!

It's red RMB, I will give you money hundred by hundred

Having finished washing car, you have nothing to do?

Okay, I will find something for you to do!

Some do like Chinese kungfu, but some are those who are unable to live in their countries

So where to go?

They hear Chinese people are hospitable

Well they are nothing in their countries, but they are taken seriously in China

You stupid guys, You funny guys,

You stupid foreigners go and find a translator, it is you I'm cursing

My name is Xiedi, and everyone has gene, so take care!

Go and ask your grandmother what's your genealogy like

Ask about the Eight-Nation Alliance

All of you are stupid, I wanna shoot you stupid foreigners

Fat Shady is one of China's more successful rappers who shot to fame after an appearance on a televised talent show similar to The Voice. He is part of a Chengdu hip-hop collective that raps almost exclusively in the city's local dialect and has tattoos that read "Shady" and "Hustle & Flow" — and even inked Eminem's face — on his arms.

In a 2015 interview with the Huffington Post, he said: "Chinese audiences can’t accept music with any attitude or individualistic stuff."