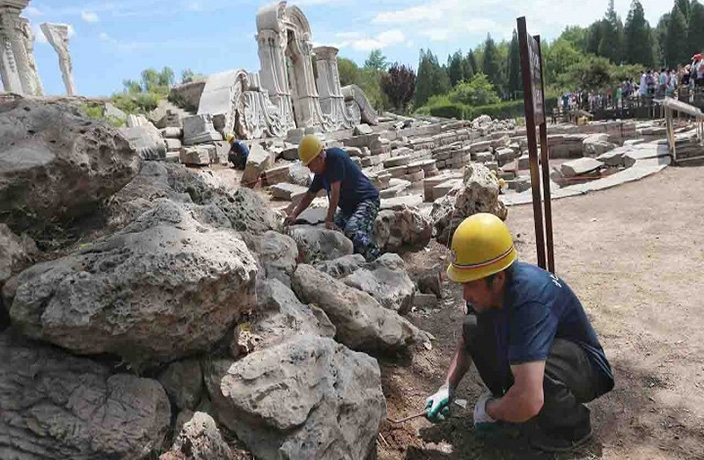 Archaeologists working on a large-scale excavation at the Old Summer Palace have now unearthed more than 50,000 relics offering a unique glimpse into the site’s elaborate past.

The excavation project began in 2013 and is expected to be completed in 2020. The dig site currently measures 7,000 square meters, making it the largest excavation to be conducted at Beijing’s Old Summer Palace, also known as Yuanmingyuan Park.

So far, archaeologists have discovered an array of artifacts, including numerous bronze and jade pieces. The most prized item that has been unearthed is a gilded elephant head.

Yuanmingyuan Park was once the site of the royal gardens during the Qing Dynasty (1644-1911). The area was famous for its exquisite grounds, unique architecture and vast art collection. However, the area was destroyed by British and French forces during the Second Opium War (1856-60).

"The park's glorious past cannot be restored any more, but these relics will let the public know more about the park and its history," a statement released by the park reads.

By unearthing these relics, archaeologists not only aim to educate visitors about the park’s history but they hope to protect palace remains.

"A few sections of the palace survived the fire and destruction of the 1860s… that's why we want to unearth the remains that are buried underneath, so the visitors can see that the Yuanmingyuan Park is iconic," said Chen Hui, chief of the park's archaeological department.

The newly-discovered relics will be on display for the public until October.