Would Chinese-style education work on Britsh kids? That’s the question posed by a new three-part BBC program Are Our Kids Tough Enough?: Chinese School, which invited five Chinese teachers to take charge of a class of 50 secondary school pupils at the Bohunt School in Hampshire for one month.

The experiment set out to discover if the “long days and strict discipline” of China’s education system would “produce superior students” – or, more accurately, students who are better at taking tests, like the Shanghai and Hong Kong teens who regularly top the PISA rankings comparing student scores around the world. (Even though many criticisms have been leveled at the methodology and usefulness of the triennial PISA tests, the UK is rather obsessed with how far British kids lag behind their Asian counterparts).

During the month-long experiment, the 15-year-old British guinea pigs were forced to don “a completely atrocious tracksuit,” do group eye exercises, salute the flag and start the day bowing in unison to their unimpeachable laoshi. 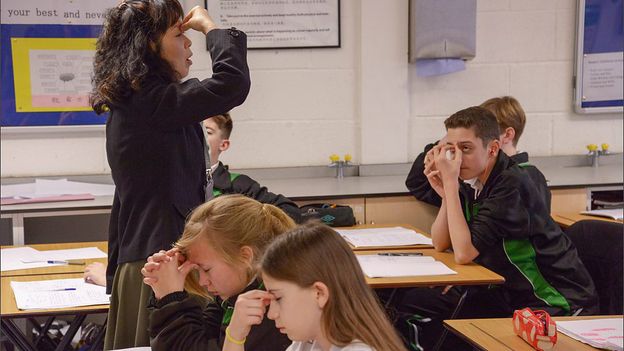 As you can imagine, culture clash ensues.

Bohunt pupil Rosie Lunskey recalled, “Acting like robots was the right way to go. … [T]he only thing I felt I was learning was how to copy notes really fast and listen to the teacher lecture us.”

Bohunt headteacher Neil Strowger remarked that British students “are not used to being incarcerated in a large group and in the same classroom studying a very narrow curriculum.”

Meanwhile, Chinese math teacher Simon Zou said he was stunned when his British charges “found it unnecessary to prove Pythagoras's theorem,” but was also impressed by their independence. 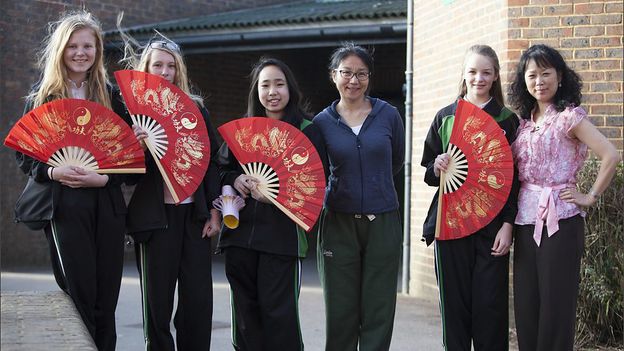 The first hour-long episode of the experiment aired in the UK on Tuesday; viewers will have to wait another two weeks to find out if the Chinese-taught pupils out-score their control group peers who remained in the regular British system.

The first part has already been translated and uploaded onto the Chinese Internet, where it’s drawn thousands of comments, a few of which are translated below:

@青岩二秋啾啾啾  “The BBC documentary had me dying of laughter…. I wonder what psychological effects it had on the British students. They’re going to need therapy afterwards.”

@ 崔文文  “It’s not just Chinese-style education but also the Chinese value system, since I was a kid, I’ve never been able to accept the stifled thinking and overly critical style of teaching.”

@ 王卜  “British education tries to produce people with different personalities and opinions, respecting the law is the most important character trait and it’s a personal choice which occupation one goes into. Chinese education tries to produce people with the same thoughts, and exam results are the most important indicator of success. The cultures are different.”

@ 阿苏_BeginAgain “Watching those British students, I couldn’t help but cry. That was us once.”

@ 订房宝 “I think the program has given us a real insight into Chinese-style education, with regards to challenging authority, students’ attention and so on. It made me think of when I was a kid, how I was terrified to ask the teacher a question and later on at university I didn’t have that thirst for knowledge.”