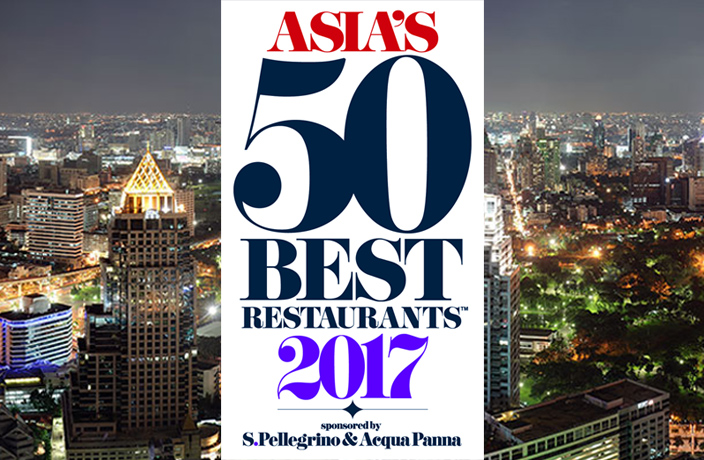 The 2017 edition of Asia's 50 Best Restaurants list (sponsored by San Pellegrino and Acqua Panna) has just been released, and China has contributed 11 of its own to the all-star team — a drop from 13 last year.

While some were hoping that the debut of Shanghai's very first Michelin Guide would see more of the city's restaurants draw attention from the voters, those hopes appear to have been dashed, as just two Mainland restaurants (down from three last year) made the Asia-specific version of the list.

Pairet, who picked up the Chef's Choice Award last year, was unable to repeat a win for Mr & Mrs Bund, which was knocked off the list this year.

Hong Kong had a decent showing with seven restaurants on the list. Richard Ekkebus' French fine dining outfit Amber landed at #3 — the best in Greater China. Cantonese restaurant Lung King Heen came at #17, Ta Vie at #33, L’Atelier de Joël Robuchon (which has a branch in Shanghai) at #41, Ronin at #45 and The Chairman at #47.

Italian chef Umberto Bombana of famed Hong Kong restaurant 8½ Otto e Mezzo Bombana (which also has an extension in Shanghai) picked up a Lifetime Achievement Award, as well as the #4 restaurant ranking. May Chow of Little Bao was named "Best Female Chef."

In Macau, Jade Dragon ranked #32 and The Tasting Room by Galliot was #39.

Sadly, no other Mainland restaurants made the cut — again.

Meanwhile, Gaggan in Bangkok picked up the top award for the third consecutive year.

The Asia-specific list is sister to the global edition, dubbed the 'World's 50 Best Restaurants,' which has seen its fair share of criticism in the past for favoring fine dining.

Read more: Sorry China, the 'Best' Restaurant in Your Country is Run by a Foreigner

Voted for by Diner's Club members, an "influential group of almost 1,000 leaders in the restaurant community," regional panels like the Asia's 50 Best list are made up of "food writers, critics, chefs, restaurateurs and highly regarded 'gastronomes.'" This year's list polled 318 experts in Asia.