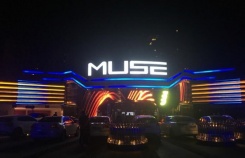 Picture the scene: it’s a cavernous basement club, similar in many ways to Elements in Gongti, Beijing. The club is packed with people looking like they aren’t enjoying themselves: there’s a ton of phone fiddlers, and some long-legged woman looking bored at the idea of life itself. But here’s a group of spiky-haired young men with two bottles of expensive foreign liquor open in front of them and apparently no idea what to do next. Get the picture? It’s bizarre but it’s engrossing.