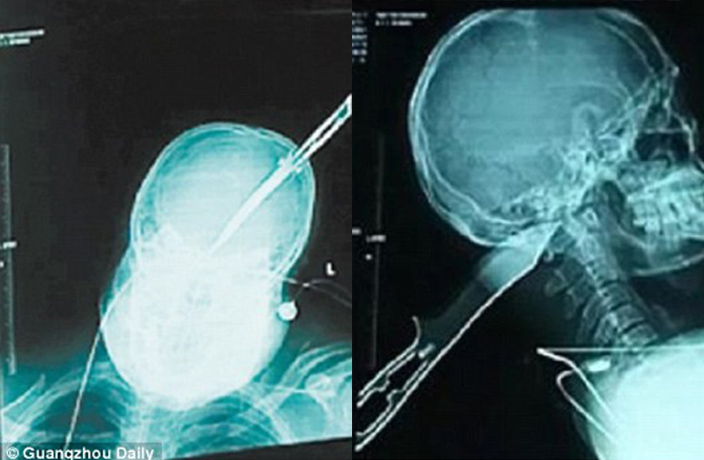 A man in Guangzhou recently defied all odds when he drove himself 20 minutes by motorbike to a police station with an 8-inch knife lodged in his head, following a late night altercation.

The victim, surname Qin, was operating a motorcycle taxi in Guangzhou’s Zengcheng Xintang neighborhood around 12am Sunday when his passenger stabbed him in the head after refusing to pay the agreed upon fare of RMB15, reports Daily Mail.

The culprit immediately fled the scene, and with no pedestrians nearby to help, Qin was forced to rush himself to the nearest station.

“I thought I had an electric shock,” he said to reporters as he lay in his hospital bed, according to Guangzhou Daily. “After I fell onto the ground, I felt the back of my head and realised I was stabbed. I called for help several times but no one came, so I had to drive myself to the police.”

When he arrived at the police station, the 33-year-old Guangxi native was immediately rushed to Zengcheng Xintang Hospital before being transferred to the Third Affiliated Hospital of Southern Medical University. 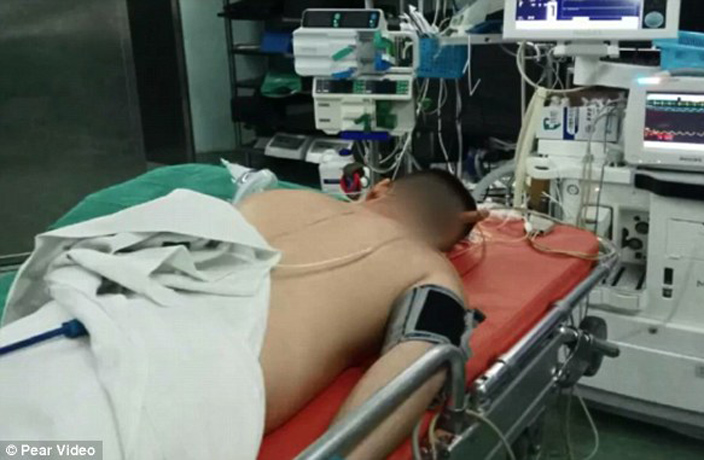 Doctors say that it is a miracle Qin made it as long as he had, let alone survived the incident at all.

“Luckily, the blade had missed the main blood vessels. Had the knife penetrated one to two centimetres deeper into the skull, the patient would have died,” said Liu Chengyong, the critical care department’s chief physician, adding that he had never before had a patient show up at the hospital with a knife in his head.

X-rays revealed that the blade’s tip penetrated between the atlas and foramen magnum, and had become stuck in his skull. Because of its fixed position, Qin experienced almost no bleeding, which is why doctors believe he was able to get himself to safety.

It was already 3am when the operation began, and it took five hours for doctors to remove the knife and successfully repair Qin’s wound. The operation had to be carried out under microscope, and with the utmost precision – any slip-ups, and Qin could have immediately died of his injury. He is now in stable condition and doctors expect him to make a complete recovery.

A water dispenser by trade, Qin would occasionally operate a motorcycle taxi at night to supplement living costs for his family.

It is unclear from Guangzhou Daily's report if police have made any progress in apprehending the attacker.

READ MORE: Man Who Attacked Shenzhen Expat with Knife Freed after Only 8 Months 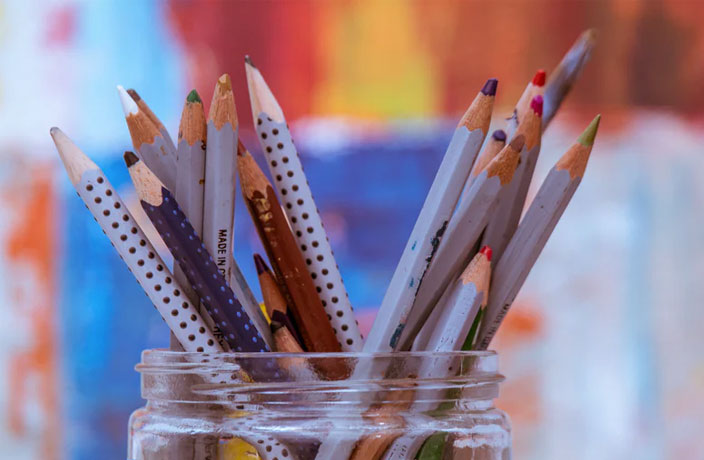