On June 17, 1967, the People’s Republic of China announced a successful hydrogen bomb test, becoming the world’s fourth thermonuclear power after the US, Soviet Union and UK – but ahead of France.

Dropped at 7am from a Hong-6 jet bomber over the Lop Nur Test Base in southeastern Xinjiang, the H-bomb was parachute-retarded for an airburst at 2,960 meters (see video below), and had an explosive power 150 times that of the atomic bomb used by the US on Hiroshima at the end of WW2.

China had made fast progress in developing nuclear weapons in the 1960s, committed as they were to breaking the superpowers’ monopoly on nuclear weapons, and to ensure Chinese security against the Soviet and US threats.

In a 32-month period from testing its first atomic bomb on October 16, 1964 at Lop Nor – an area of seasonal salt lake sand marshes – the PRC launched its first nuclear missile on October 25, 1966, before the detonation of the H-bomb in 1967. 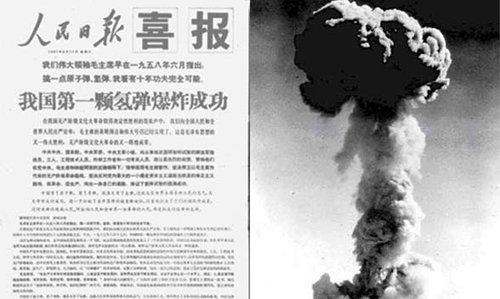 Watch the detonation below: