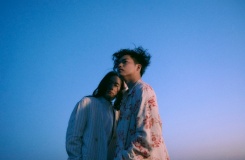 Japanese dream-pop band The fin. have been making music since 2012, when the group initially formed and released a single track on Soundcloud. Inspired by the lazy chillwave perfected by modern indie bands like Washed Out and groovy synth-driven dance pop of the ’80s, The fin. crafts softly textured soundscapes that are both melancholy and uplifting by nature. A popular touring act in China over the past few years, The fin. are returning again this year in support of There, their sophomore full-length release which debuted last year.