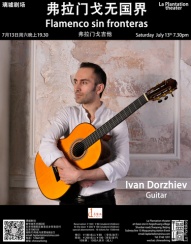 Ivan Dorzhiev is a top prize winner of some other renowned international guitar competitions such as the “Virtuosos of guitar” International Guitar Competition in St. Petersburg (2010) and the “¡Viva España!” twice – in 2014 and 2015. In Spain, he was studying flamenco during 2012 and 2013 in Seville, Granada from Pedro Viscomi, Michele Laccarino.

Nowadays Ivan Dorzhiev leads an extensive concert work all around concert halls of Russia (Saint-Petersburg, Moscow and others) and abroad. His performances are recognized by international audiences and critics alike.

Ivan Dorzhiev is a top flamenco guitarist and exceptional musician who is redefining what is possible on and for his instrument.