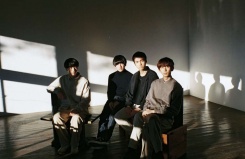 Based in Tokyo, Mitsume began as a four-piece band back in 2009, when they self-recorded their first album. They began performing live a year later and haven’t slowed down since. While touring for their 2014 album Sasayaki, the indie rockers recorded a live DVD at Ebisu Liquid Room in Tokyo which was incredibly well received, gaining them fans all over Japan and beyond. Discover what the fuss is all about for yourself at their gig at Omni Space.