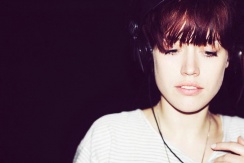 THUVDR & The Drop join forces to bring in this dynamic duo. The critically acclaimed Sinjin Hawke has collaborated with Just Blaze, DJ Rashad and MikeQ and produced for Kanye West and Frank Ocean (!). And then there’s Zora Jones (pictured), a masterful technician of sound whose style is described by Pitchfork as “spellbinding” and “fascinating.” Expect experimental sounds you won’t hear anywhere else.