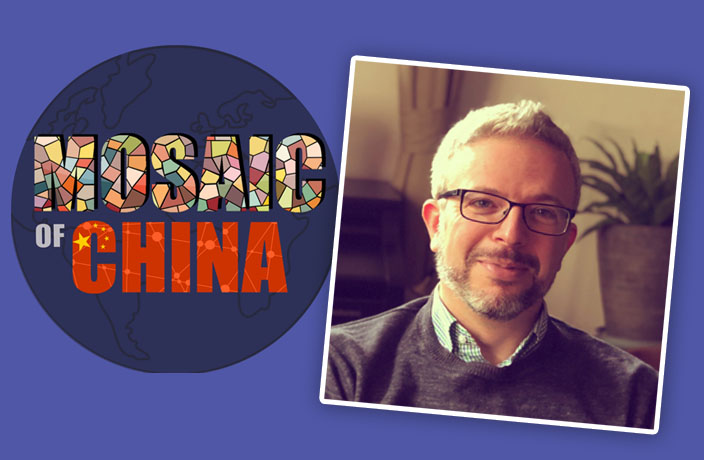 Brit Oscar Fuchs first came to Asia in 1999 on a one-year contract teaching English in rural Japan. He ended up spending 16 of the last 20 years here, the last four of which have been in Shanghai. Enthralled by the diverse set of people that China attracts, he set out to showcase their lives on a new podcast called Mosaic of China.

You have lived all around the world – what gives you such itchy feet?
It wasn’t planned that way at all. I studied law and German, after which I decided to run off to Japan in a dramatic (and successful) bid to avoid becoming a lawyer. I returned to the UK, but after four years it dawned on me that I wasn’t built for the London rat race. So I joined a company that was supposed to send me on assignment to South Africa.

Somewhere along the line the wires got crossed, and I ended up getting sent to Singapore instead. Once there, the stars aligned and I co-founded a company. After six years in Singapore, the game of international musical chairs took me to Hong Kong for three years and then to Shanghai, which is where the music stopped and here I am.

How did Mosaic of China come about?
After more than a decade in my company, the stars aligned again, and I was able to exit in early 2019. So the only question was... what next? I wanted to try my hand at something more creative, so I first started a blog, but I found it to be too lonely, and way too self-indulgent. So the idea evolved into producing a podcast instead. That way it would be less about me; I could showcase stories from a diverse set of people, and hopefully create a product that would offer the English-speaking world a different version of the China that they’re fed on the news.

Each podcast episode is around 25 minutes long and designed to be played while commuting to work or doing a mundane chore. Each interview is split into three parts: in the first part the guest and I have a freestyle conversation and explore their unique experience; in the second part I ask each guest the same 10 open-ended questions, which elicit quite varied answers; and in the final part, the guest nominates someone to be interviewed in the next season of the show. And that’s how, tile by tile, the episodes build out to form a ‘Mosaic of China’. 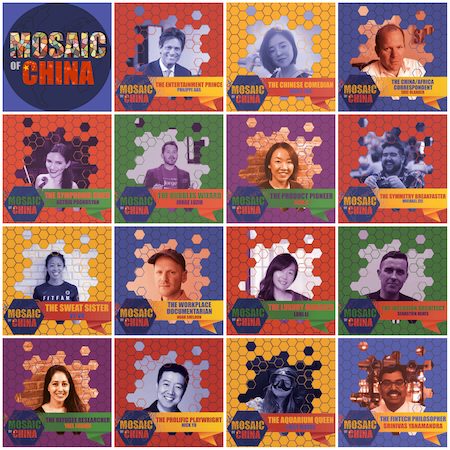 The mosaic starts to take shape

How many episodes have you done to date?
There are altogether 30 episodes in Season 1, and we’ve released around half of them so far. They come out every Tuesday on both Chinese apps (like Ximalaya, Weibo) and international apps (like Apple Podcasts, Pandora, Spotify and YouTube). You can just search for ‘Mosaic of China’ on any podcasting platform, and it should pop up.

How do you pick your subjects?
For Season 1, I made sure that the audience was as diverse as possible. So I curated a group that would include as many different stories to tell, from as many different viewpoints as possible. There’s a comedian from Inner Mongolia, a French CEO of Disneyland Shanghai, a violinist from Armenia, a Venezuelan marketer from Coca-Cola, an entrepreneur from Gansu, a diplomat from New Zealand, a playwright from Anhui, a Canadian biochemist, a fashion designer from Hong Kong and so on.

For Season 2, the guests are nominated by the interviewees from Season 1, so the project begins to have a life of its own. That’s the most exciting part of the podcast for me, because it allows me to meet people that I might not otherwise have encountered.

Cool idea. Are all guests based in Shanghai?
Most of the guests so far are based in Shanghai, simply because this is where most of my personal network is located. That’s by design; the idea was for the Mosaic to build out from a small concentrated kernel at the start. But in one way it’s a limitation to the early days of the project, especially since it’s supposed to be ‘Mosaic of China’ rather than ‘Mosaic of Shanghai’!

Happily, the referrals for Season 2 are already much more spread out, and I expect this trend to continue as the Mosaic continues to grow in future seasons, so the podcast will eventually become much more diverse. Having said that, since I want to keep a strong international flavor to the show, and there are still so many interesting stories to uncover in Shanghai, I would expect this community to continue being over-represented in the future. 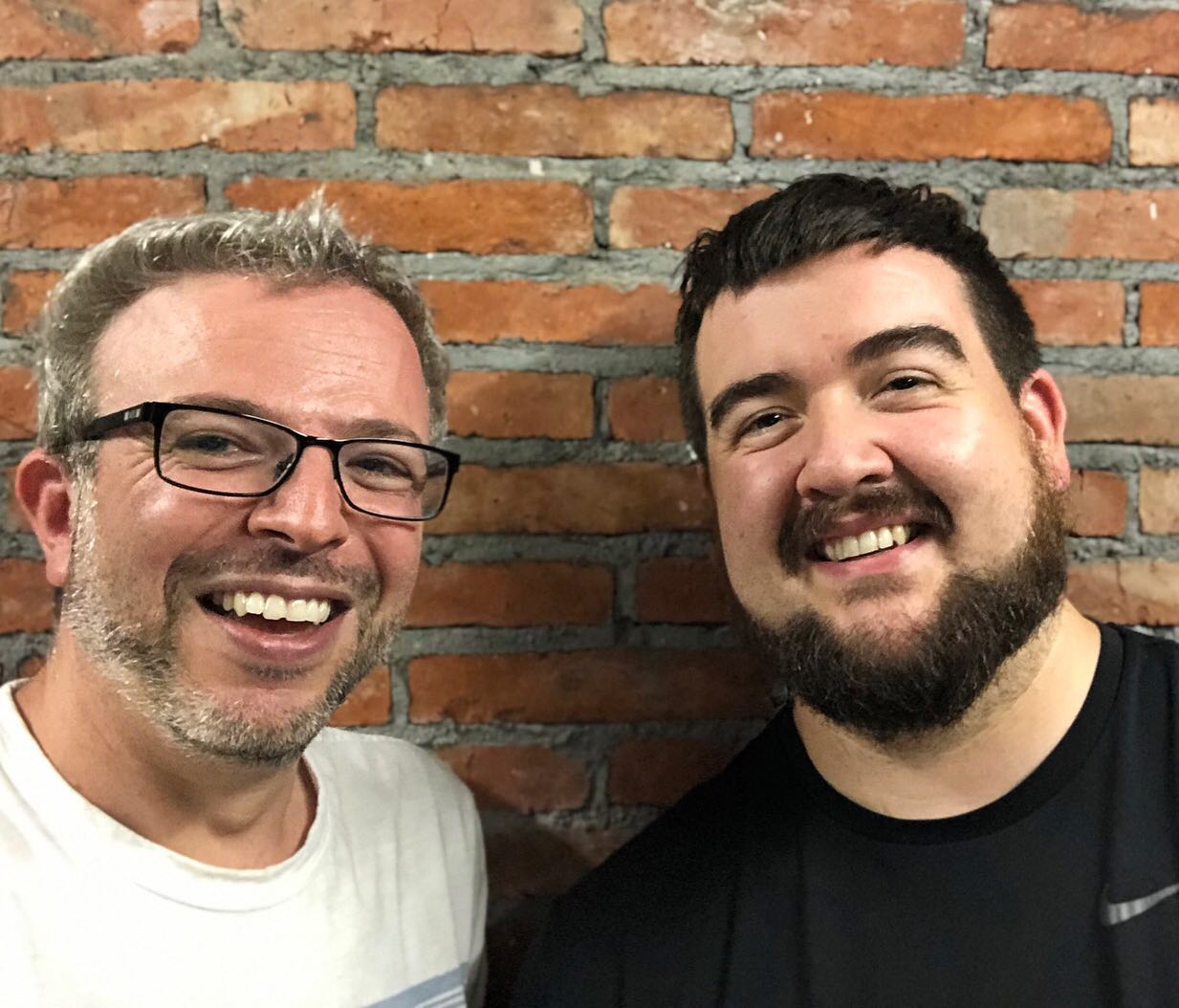 Maybe the best one for That’s readers to dip into would be Episode 7 with Michael Zee. Michael is the man behind the Instagram account Symmetry Breakfast, and he shares a lot of interesting information about food culture in China, the links between Shanghai and Liverpool, and the day-to-day life of a social media influencer.

You ask each guest to bring in an object that somehow represents what they do in China. What have been the most interesting?
The eighth guest is Vy Vu from FitFam. She’s originally from Australia and she brought in a very unusual lamp (below). The 17th guest is Simon Manetti from Kantar Consulting, who is also from Australia, and also brought in a lamp but for completely different reasons. I choose these two examples because they not only represent the unusual and the interesting, but also the strange patterns and coincidental connections that emerge as the series plays out.

The guest’s object is also one of the key visual elements to the podcast, because the project has been designed to include this extra layer of content to accompany the audio interview. There’s a great community of listeners on WeChat, where people can engage with the visual content, and share their own opinions and observations. 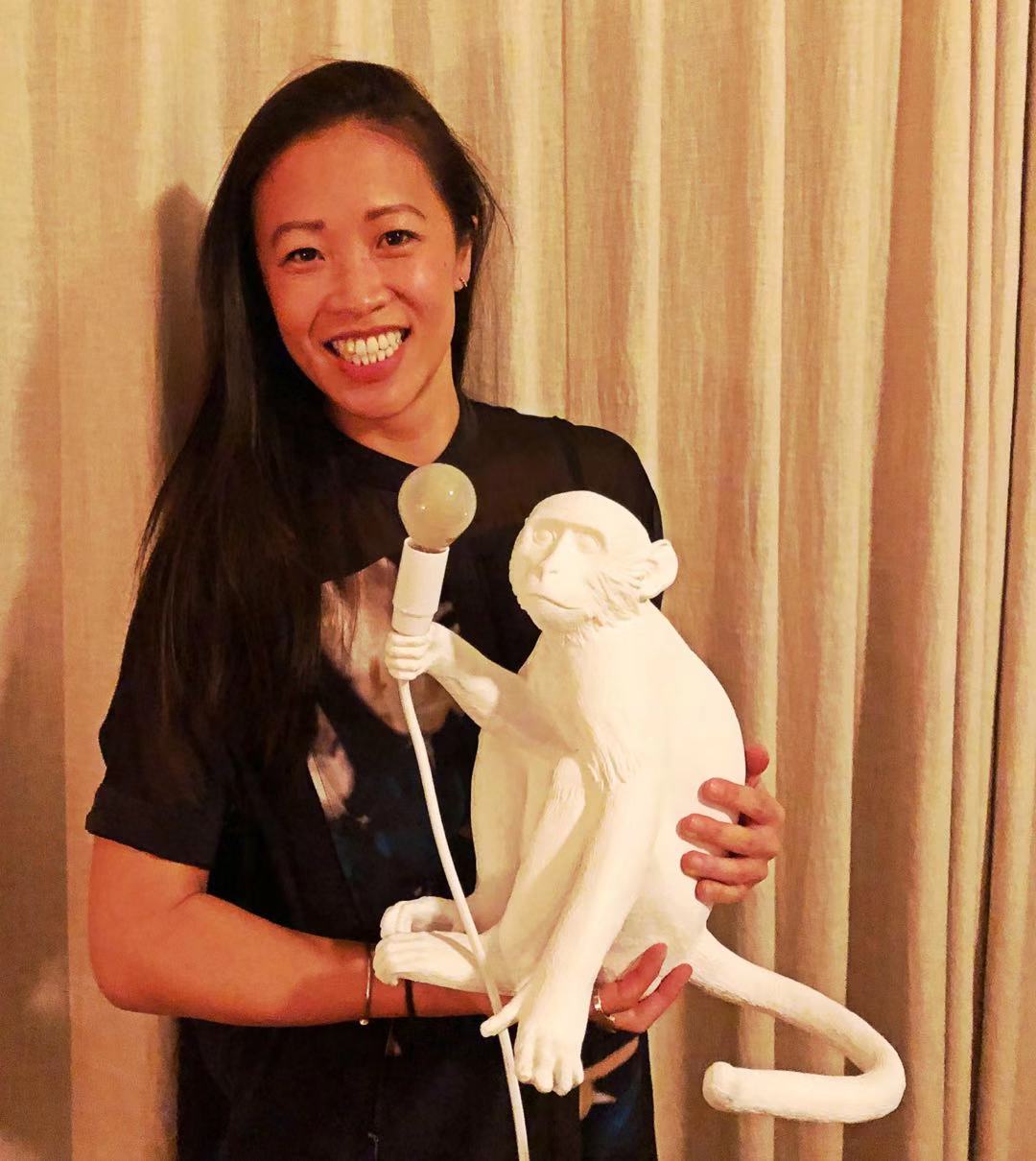 Each guest tells a fact about China. What have been your favorites?
Sometimes it’s a fact that we all already know but don’t really take the time to think about. Philippe Gas, CEO of Disneyland Shanghai, talked about China having just one time zone. That made me do research and discover that from 1918 to 1949, China actually had five time zones.

Maybe my favorite was from the playwright Rongjun ‘Nick’ Yu. He explained how the system of government at the village-level in China has changed over the years. That was fascinating for someone like me who has spent most of their life living in cities.

What about the best word or phrase in Chinese that a guest has chosen?
These answers are all so personal and contextual. That’s the beauty of asking some of these simple questions: they’re deliberately and deceptively difficult to answer. I liked the way that Lori Li, general manager of private club Yongfoo Elite, described ‘时髦’ (shimao, fashionable) as the defining essence of Shanghai. I also liked how Sebastien Denes, a diversity advocate from SAP, explained what happens whenever he says ‘听不懂’ (ting bu dong, I don't understand). It’s never so much about the word or phrase itself, but the stories that come attached.

Are there any other exciting projects you are involved in?
For now this is my main focus and passion. But in the future I would like to launch similar podcast projects for Japan and Singapore, where I still maintain very active personal networks. My only concern is that I think it will be impossible to match the tone of Mosaic of China; in every episode of the podcast, the listener is reminded about the speed of change and the sheer vibrancy of every aspect of life in China. So the project has been a wake-up call about the uniqueness of the energy that surrounds us in China, and permeates our everyday experience.

You can listen to the podcast on Ximalaya by scanning this QR code: 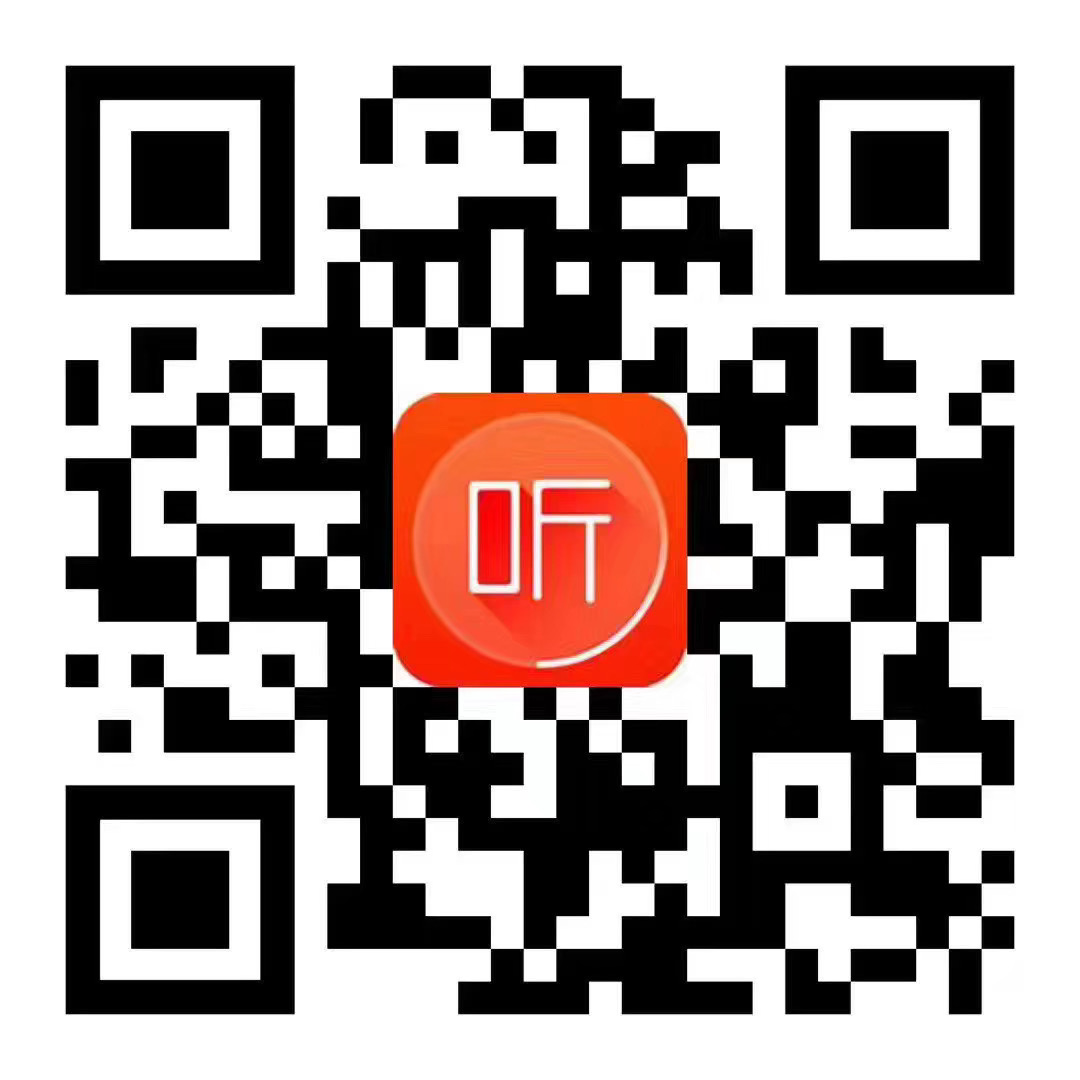 You can listen to the podcast on Apple Podcasts by scanning this QR code: 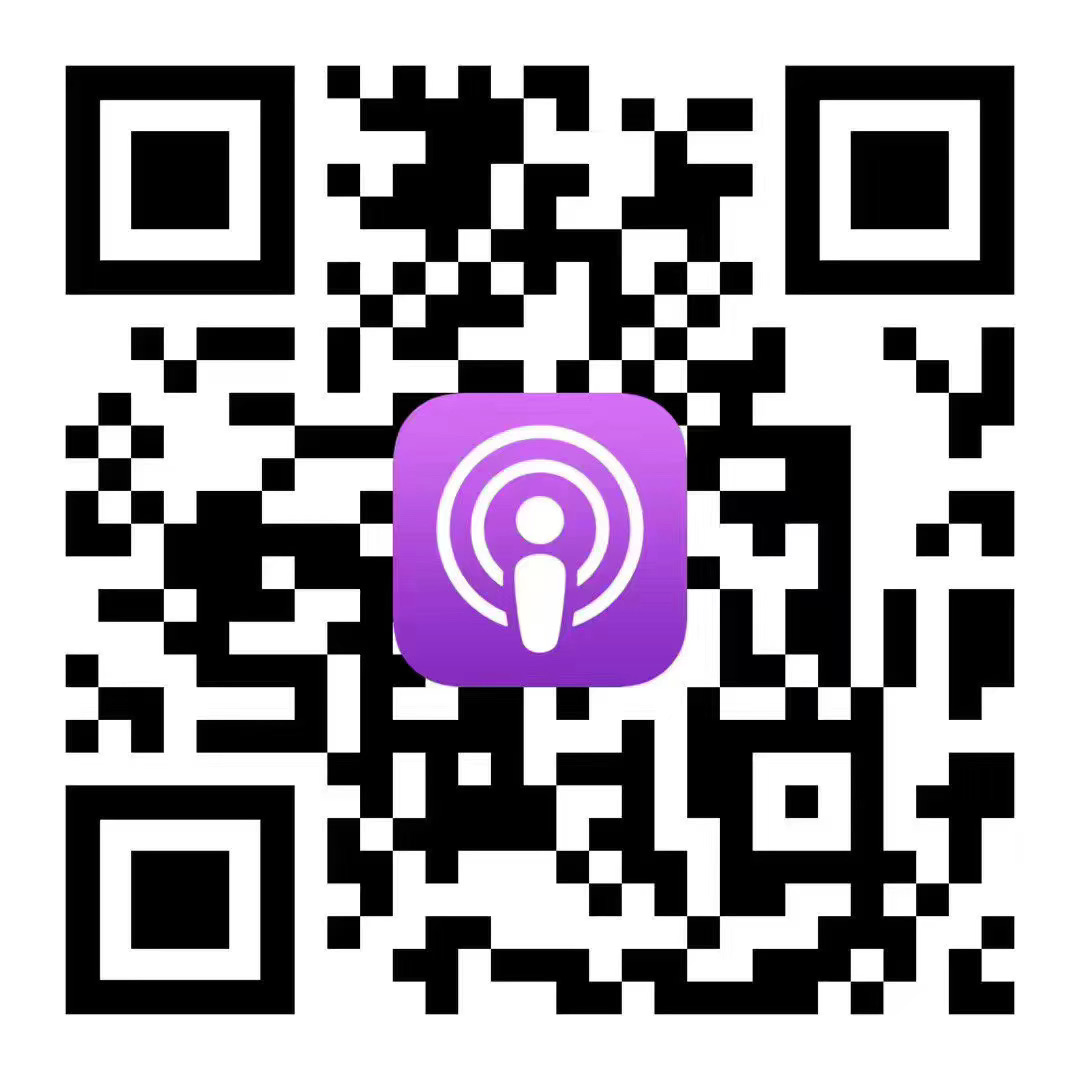 [All images courtesy of Oscar Fuchs] 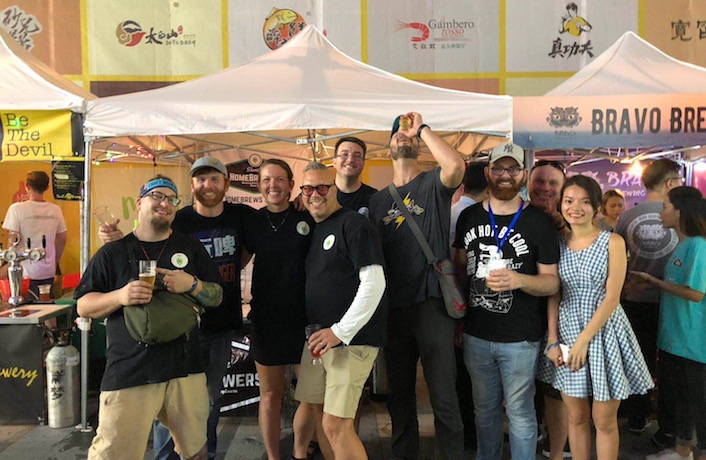 Meet the Beer Lovers Brewing Their Own in Shenzhen 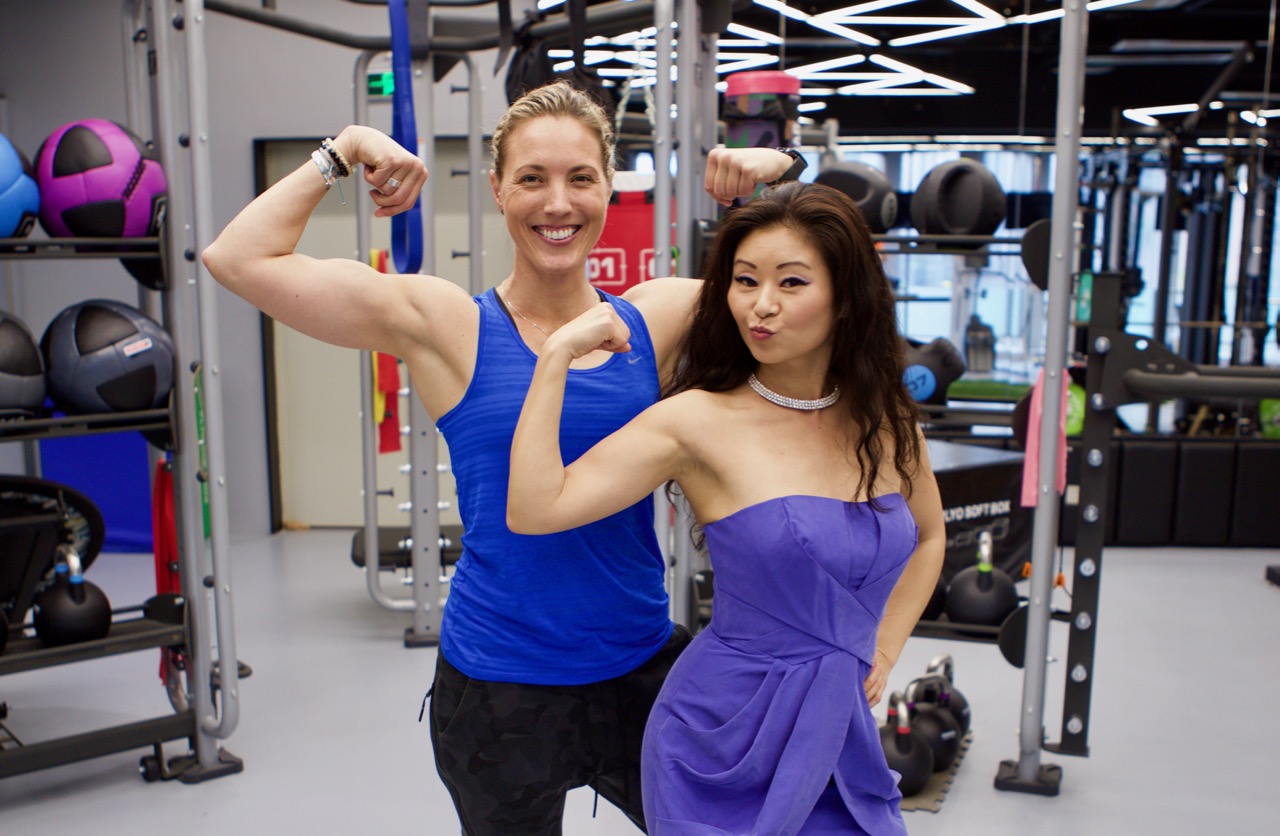 PHOTOS: Clash of the Karas – The Full Story

Rare photos of 'Good Kara' and 'Bad Kara' in their (un)natural habitats. 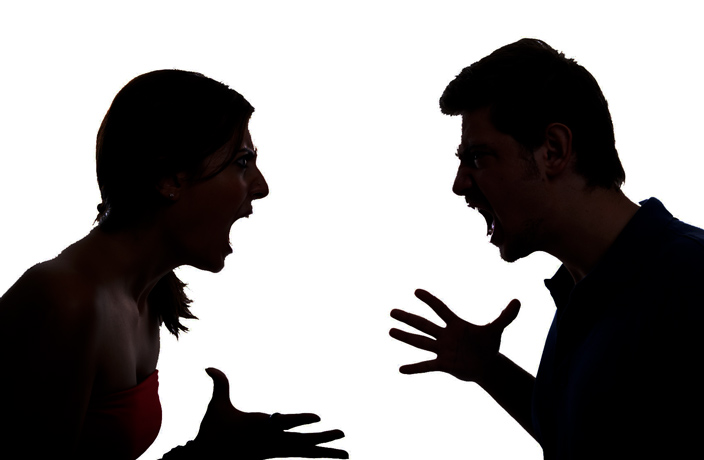 Dear Jamie: My Partner Continually Accuses Me of Cheating, What Do I Do?

Got a problem? Ask Jamie. This month, what to do when your girlfriend is obsessed with infidelity.

How a simple meetup turned into a collection of over 900 books.

Animal Rescue: How to Save a Stray in Shenzhen

Seeing a helpless animal on the side of the road usually evokes a simple and painfully practical question: what can I do to help?