Throwback Thursday is when we trawl through the That's archives for a work of dazzling genius written at some point in our past. We then republish it. On a Thursday. With Sven Goran Eriksson having just signed a US$6 million deal to coach Shanghai SIPG, we decided to take a look back at our interview with him at the beginning of the year...

As a former boss of Manchester City during the club’s dark old days of mid-table mediocrity, Sven Goran Eriksson is well versed in the complex role of managing a club in the shadow of a more illustrious neighbor.

“Next season we have to do better,” he says, looking back on his first season in China as manager of Guangzhou’s ‘other team,’ perennial underachievers R&F. “I was a little bit disappointed not to make the top four, but the big target was not to make the Champions’ League this year. But next year, we have to do it.”

With cross-city rivals Guangzhou Evergrande newly crowned kings of Asia, Eriksson has his work cut out. Fortunately, everyone loves an underdog, and as Manchester United’s tumultuous season is proving, nothing in football lasts forever. So, while closing the gap is likely to be a challenge, it’s nothing the well-traveled Swede hasn’t encountered before.

“The biggest job I’ve had in football was with England,” he says of his time in the role many have taken to describing as a poisoned chalice. “Being the manager of England is probably one of the biggest jobs in the world, every big tournament you have 60 million people behind you.”

Or against you, as the case may be.

A feature on the front pages of the nation’s newspapers as much as the back, Eriksson’s colorful personal life – including a high-profile affair with glamorous TV personality Ulrika Jonsson – became as much a part of his time in England as his decidedly decent results on the pitch, where Erikkson twice led England to the World Cup quarter finals.

“The press here are very polite,” he says of Guangzhou’s comparatively tame tabloid culture. “But to be honest I cannot read it. Sometimes people read it to me. The good thing is they concentrate on the football.”

When Eriksson arrived at the club, the team was struggling near the foot of the table. His impact was immediate, and only a late stumble stopped them joining Evergrande in qualifying for the Asian Champions league. But he is aware a repeat of last season’s sixth place finish will be seen as failure.

“We have to use the holiday to spend some money and to spend it wisely. We have many players on the list,” he explains, while noting that with a limit on the number of foreigners per team, domestic talent is what is most sought.

“It is much more difficult to sign good Chinese players because everyone wants them. But so far everything is very good. My players are very professional and work very, very hard. I coach the same way as I always have. I try to organize how to defend, how to attack, and try to make them stronger.

“In modern football you have to be very, very fit. The best players are super fit today. The best teams are running all the 90 minutes. The biggest runners are the German teams and they won the Champions League.

“But every time you change countries you have to be very open-minded and have got to look at how it works in China. You cannot make a Chinese player Swedish or Italian.”

Eriksson agrees with his friend and competitor, Guangzhou Evergrande coach Marcello Lippi, that the problem with football in China is the lack of a proper football culture.

“Many of my players hadn’t played football when four, five or six years old, they started late. That is a big handicap for football here.

“Here in China, it is a pity. In so many sports China is so good. In the Olympics they rank second or third in the world, top class. In football they are ranked around 96. The main reason is the grassroots. Go in the parks and you never see anyone playing football, it is ping pong, badminton or basketball. In London in every park, they play football, football, football.

“It is a challenge. Football clubs need to change it and make a big effort to get a lot of youngsters playing organized football. If you have millions of boys and girls playing football in Europe, South America and even Africa, it must change here.” 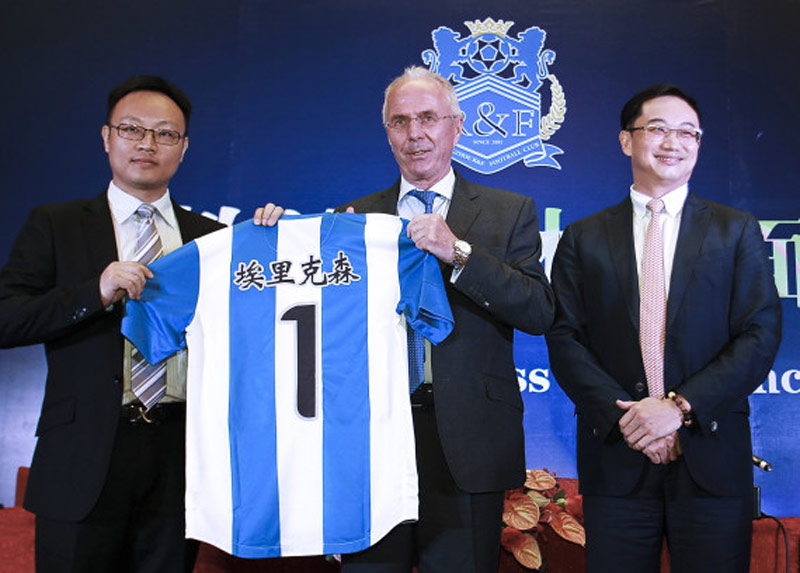 And while Evergrande has linked up with Real Madrid in building a soccer school, R&F has gone into partnership with London giants Chelsea (a club Eriksson was consistently linked with managing) in building a similar school in Meizhou.

“It is very important and I am sure that every team in Super League will start their academies,” Eriksson stresses. “It is a must for the future. In Meizhou there is a school, hotel, dining rooms and football facilities, all totally new. It is a big investment. From that investment, nothing will come out in the next two or three years, but in five or six, hopefully yes.”

Despite the weaknesses he has seen improvement in the CSL.

“I had been here before with Sampdoria and played against the national team. Two years ago, I traveled round looking at football and the league is getting better and better. It is good for football here that Evergrande are the champions of Asia. It is very good everyone says, ‘Wow, we are champions of Asia.’ The target for all the other clubs is to catch Evergrande and get as good as they are."

To that end, Eriksson kept his players back for three weeks of training at the end of last season.

“It was important we kept them back as a two-month holiday would be too long, they would get too big,” he says. “For three weeks we did a lot of work, gym work as well as football.”

Similar to on the pitch, in terms of support, Eriksson knows there is an imbalance between his side and Evergrande, but he likes the football atmosphere in the city.

“We have crowds of 10-15,000. That is okay for us because we were not at the top. Evergrande has 40-50,000 and that is fantastic. We hope to raise our standard on the pitch and in the stands for next season. More and more people are coming to see football in China.”

Away from the football, Eriksson is happy in Guangzhou. “Life here is very good,” he says. “I like the place, a big city, a very international city. The city has absolutely surprised me. Two or three years ago, I had never heard of it.”

He has been impressed by the international dining options available and admits he enjoys dinner with Lippi. “We sometimes have dinner together, his staff and my staff and I have contact with him.”

The coaches had a wager on the derby game last season and the Swede had to put his hand in his pocket after defeat, but says, “We have agreed on the same bet next season. Whoever wins does not pay the dinner.”

Eriksson’s autobiography, Sven – My Story, came out last year to fanfare around Europe, especially in England. Having committed himself to the end of his R&F contract in November, there is an option for an additional year on top of that.

If a Champions’ League place is secured, the Swede may need to add a new chapter or two about the Chinese adventure that he is clearly relishing. And maybe he will be telling the story of how the second team came first.