The Shanghai Metro System has garnered a lot of attention as it rushed from five lines to the worlds longest in the span of 10 years. 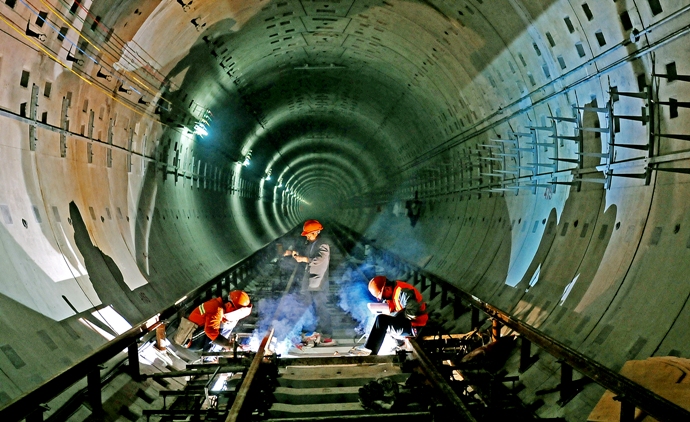 What is less known is that the idea for Shanghai’s underground public transportation system was first proposed in 1956 as not merely as a way to shuttle people around town, but as a way to move armies and evacuating the civilian population in the event of war. 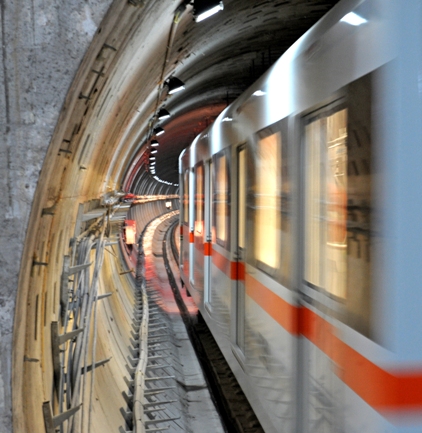 In 1964, this plan was put into action and the Tunnel Engineering Bureau built a secret 660m long tunnel and prototype station beneath Hengshan Park. While people played on the grass above, scientists were hard at work trying to test different types of tunnels that would suit the wet Shanghai soil. 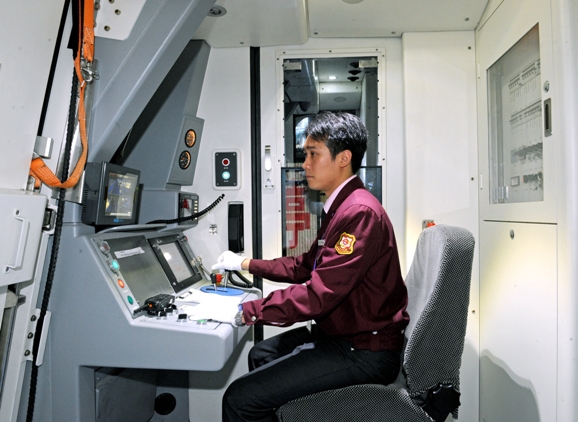 With the onset of the Cultural Revolution, these plans were abandoned until 1986, when construction for Shanghai’s first tunnel – Line 1 – was approved. The route, which was to run from Xinlong Hua (renamed Shanghai South Railway Station in 2001) to Shanghai Railway Station finally opened to the public in 1995. It was just 16km long. That was followed by Line 2 in 1999 and Line 3 in 2001. 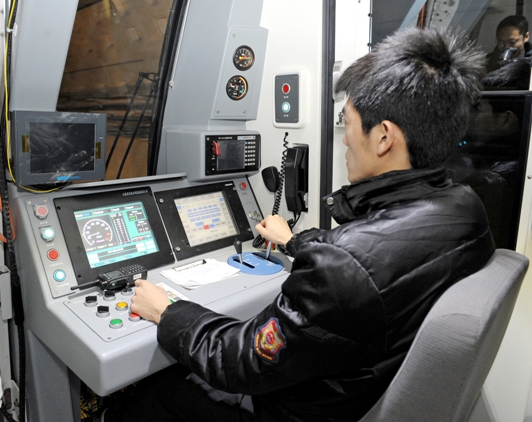 Seventeen years (and one World Expo) later and we now have 11 lines in operation, clocking in with a total length of 420km and owned by no less that four different companies (named, creatively enough, Shanghai Metro Company 1, 2, 3 and 4). 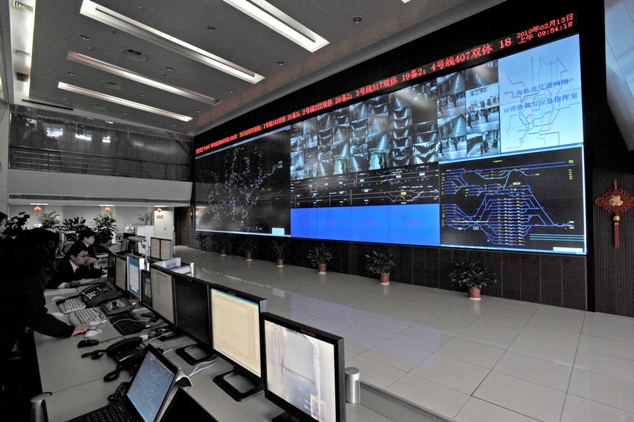 And it doesn’t stop here, baby. By 2015, the government aims to have 22 lines stretching a spider web across the city and beyond, with a total length of 1,051km. The 587 stops will reach across Chongming Island and all the way to Suzhou. You may never have to travel any other way again!

Of all the metro rails in the city, Line 11 (which stretches from Jiangsu Lu into Jiading District) wins the Speedy Gonzalez award, traveling up to 120km/hour as it gets outside of the dense city center. The average speed of the older lines, like 1 and 3 is between 50-70km/hour

When it’s time to rest, the trains of Line 1 head out to Fujin Lu, where a 30 hectare metro-car parking lot resides. Built in 2007, this grid network of rails can fit 54 eight-carriage trains at one time. This makes it Asia’s biggest metro parking lot. Coincidentally, the energy saved by reducing the amount of empty trains running is 1.3 million kilowatt per year.

As if you didn’t know already. Peoples Square, which opened in 1995, is officially the city’s busiest metro station with daily traffic recorded at over 400,000 people. There are also claims that it is the single busiest metro station in all of China, although Beijing (which is rapidly constructing metro lines of its own) it catching up quickly.

There’s a debate on this. Officially, the Hongqiao Railway Station stop on Line 2 is Shanghai’s biggest metro station at 1.3 million sqm, but that hardly seems fair as it’s connected to the railway station itself… which is Asia’s biggest by the way. Second up is Xujiahui station, which has over 18 different exits.

There’s been a recent clamoring by riders for the Metro to install full screen doors at all their stations to prevent suicides. Companies have resisted, however, as the doors cost over RMB6 million each to install. An indignant Sina Finance, the company who installs the doors, says they were originally created to prevent cool or hot air from leaving the station to reduce electricity usage, not save lives.

The award goes to – Line 11 again. Well, at least it will when its finished. By the time construction is completed in 2013, this route (which already reaches pretty far) will be a total of 46km long, with a final stop in neighboring city of Suzhou.

Why aren't we sinking?

Because the ground of Shanghai is incredibly soft and wet, all subway stations in Shanghai are connected by one continuous tunnel wall, which originally protected workers who were building the metro foundations and now serves as a permanent part of each structure. Within this tunnel is a row of double pillars dividing the space into three sections and single pillars dividing the space into two sections, which are then connected by a rib-like structure. Along with anti-floating tendencies and ground stabilization. All of which prevents the tunnels from sinking into the murky depths. 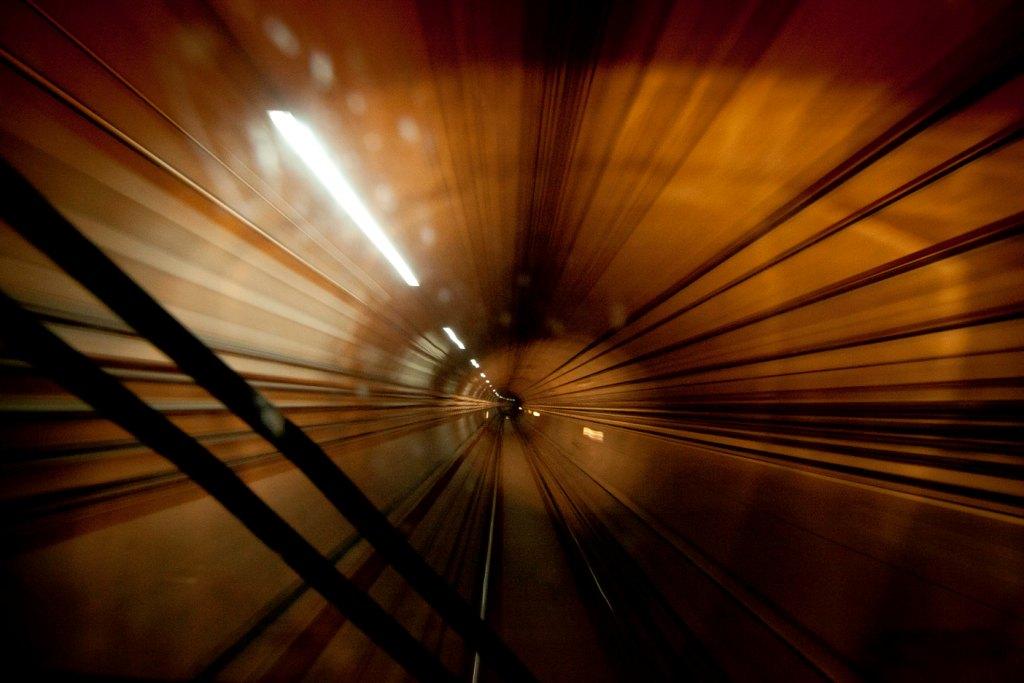 Riding in the driver’s cabin of a metro car feels a little like jumping into hyperspace. Whooshing along at over 60km an hour the tunnel lights fade to a yellow blur and the driver’s face glows blue as he carefully watches screens counting down to the next destination and monitoring other trains.

His head turns neither left nor right as we hurtle through the darkness. At no point does his hand leave the speed control or the phone to central control. After a thrilling minute, our velocity slows to a crawl and we’re at Jing’an Temple. It’s a breathtaking ride.

Wang Yijun, 30, has been working on Line 2 for 12 years. Controlling the cars requires no steering, but one must go through years of training and rigidly stick to routine - thousands of people’s lives depend on it.  “Performing every little action is vital for the metro system. Even one little mistake could cause a problem, and drivers could get in big trouble.”

In a day, a Line 2 driver will see each of these 21 stations three or four times. Those on the late shift sleep at one of the driver dorms at Hongqiao Airport or Longyang Lu, ready to work the dawn shift, which starts at 3am. “During the Expo, we were five times busier that we are now,” says Wang. “There was a period where I didn’t make it home for nine days.”

Line 6 driver Pan Lei says those lucky enough to have a route completely underground with automatic steering are the lucky ones. The 30-year-old steers his trains manually and, as his route is partly outdoors, has environmental factors to contend with. On rainy days, wet tracks make it trickier to control speed. In the winter there is no heat in the driving room. Come summer, glare from the sun and unpredictable and violent rainstorms throw a wrench in the system. 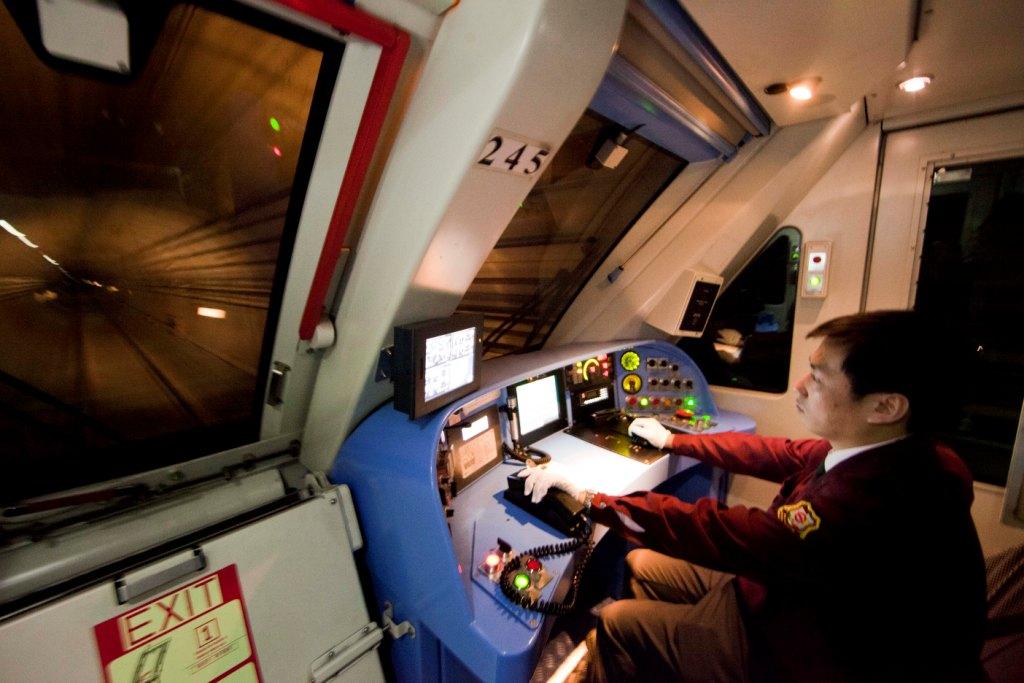 Drivers also have to be ready for situations like signal malfunctions and breakdowns. If a Line 2 train breaks down at Nanjing Dong Lu, it will stay there until another train arrives to push it all the way to Zhongshan Park or the Shanghai Science and Technology Museum, the two closest stations with side rails. This means the entire route closed until things are fixed.

Lei says passengers often lack understanding when things go wrong. “Sometimes people throw newspapers at me when they get off the train because they are so late for work, but what can I do? Unlike buses, there’s no way for us to detour.”

Lei doesn’t let it dampen his enthusiasm for the job though. “Just imagine, a train carries more than 1,000 passengers during rush hour and because of the train that I drive, they are able to get to work on time. I guess that does give me a certain sense of job satisfaction.”