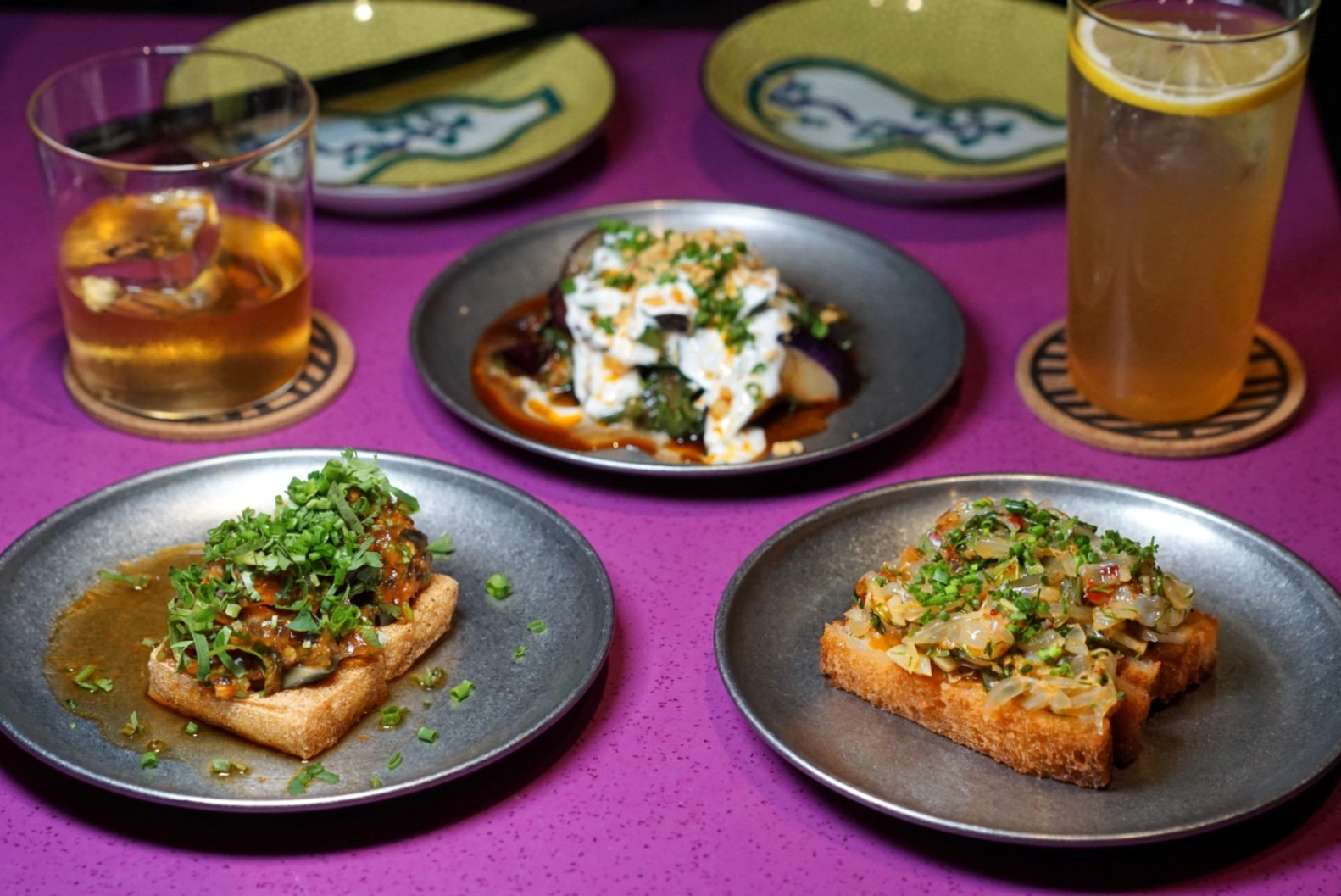 Positioning themselves as modern-day food rebels without a cause, Bastard owners and DongXi cofounders, Chef Michael Janczewski (Juke) and Jiro H, want to be the antithesis to everyday Chinese street food.

The aim is to create a trendy Chinese eatery with sharing plates, natural wines and house-infused highballs – a purely experimental concept, and the kind of place they themselves would choose to hang out. Michael’s unfettered cooking style pairs contrasting regional Chinese cuisine, distorting it further with a mix of traditional and Western cooking techniques that can be interpreted differently by each person filling one of the space’s 26 seats. 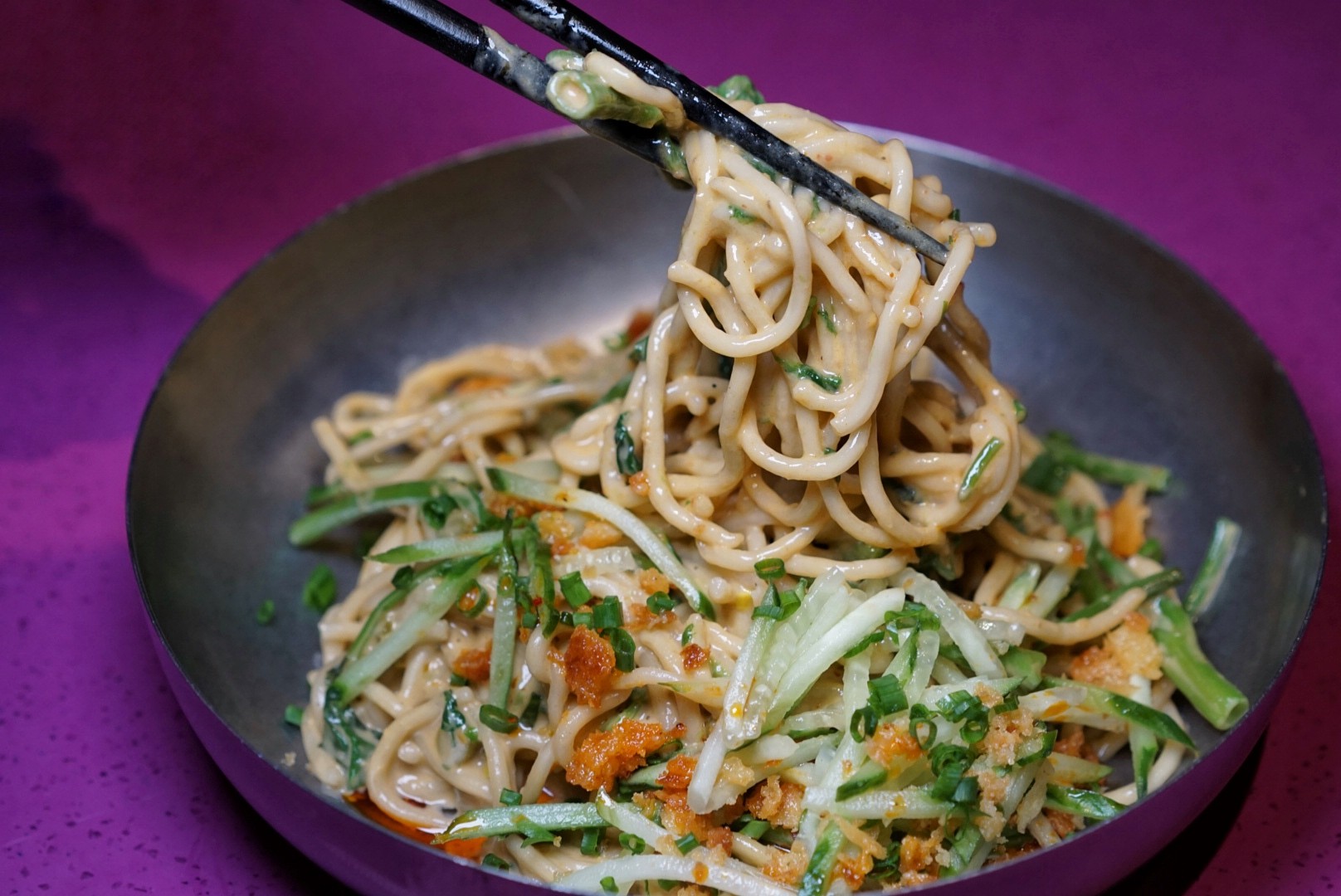 It’s not that disdainfully scorned ‘f-word’ that chefs flee from of late: fusion – a word whispered in disgust, brought on by its overuse. Rather, it’s all about the whimsical coupling of modern Chinese tastes in a playful way that just works.

Drawing on his passion for – nay, obsession with – Chinese street food, he has put together a roster of “bastardized” Chinese plates – each embodying regional Chinese components that have undergone a Ninja Turtles-esque metamorphosis.

The result is a superlative rendition of the common street snack from which each dish owes its humble beginnings. A play on the Shanghainese pidan doufu – or century egg and soft tofu, the Fried Tofu (RMB38) is – as the name suggests – deep fried tofu that is airily crisp, adorned with a salt-brined mussel and century egg white and Hunan chili salsa.

The whole dish emits a flame-licked aroma owed to the charcoal-roasted salsa, a common smoky thread that weaves its way throughout the menu. An altered permutation of the combination of delicate Cantonese wontons and boldly spiced Sichuan chaoshou, the Chengdu Prawn Wonton (RMB58) is exactly how we imagine staff meal to be like at the Michelin star restaurants that line the Bund. 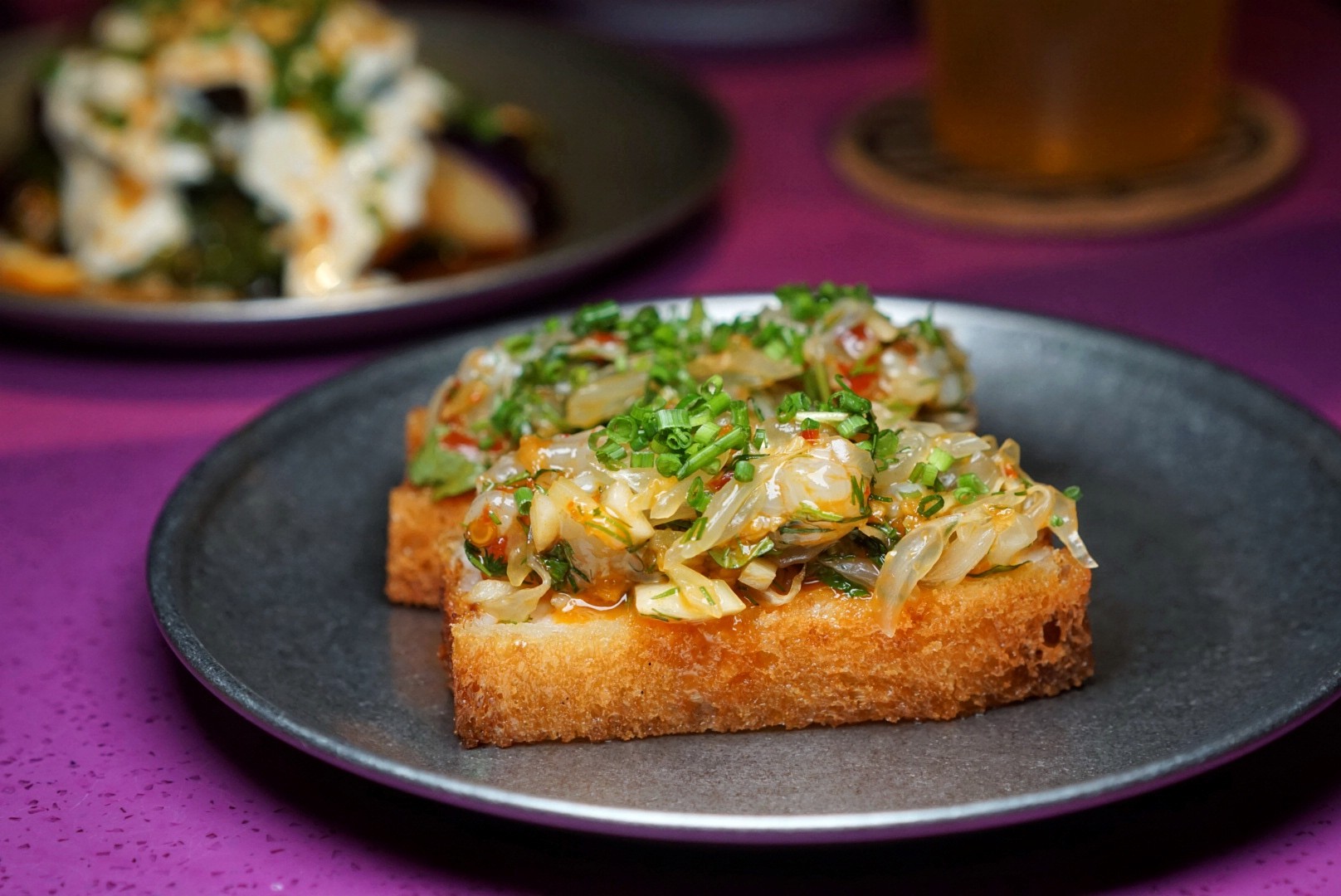 The citrus’ bright acidity cuts through the denseness of this normally heavy dim sum dish; the two bite-size servings disappear down your gullet quicker than it takes to say “sometimes it’s ok to be shellfish” to your dining companion. 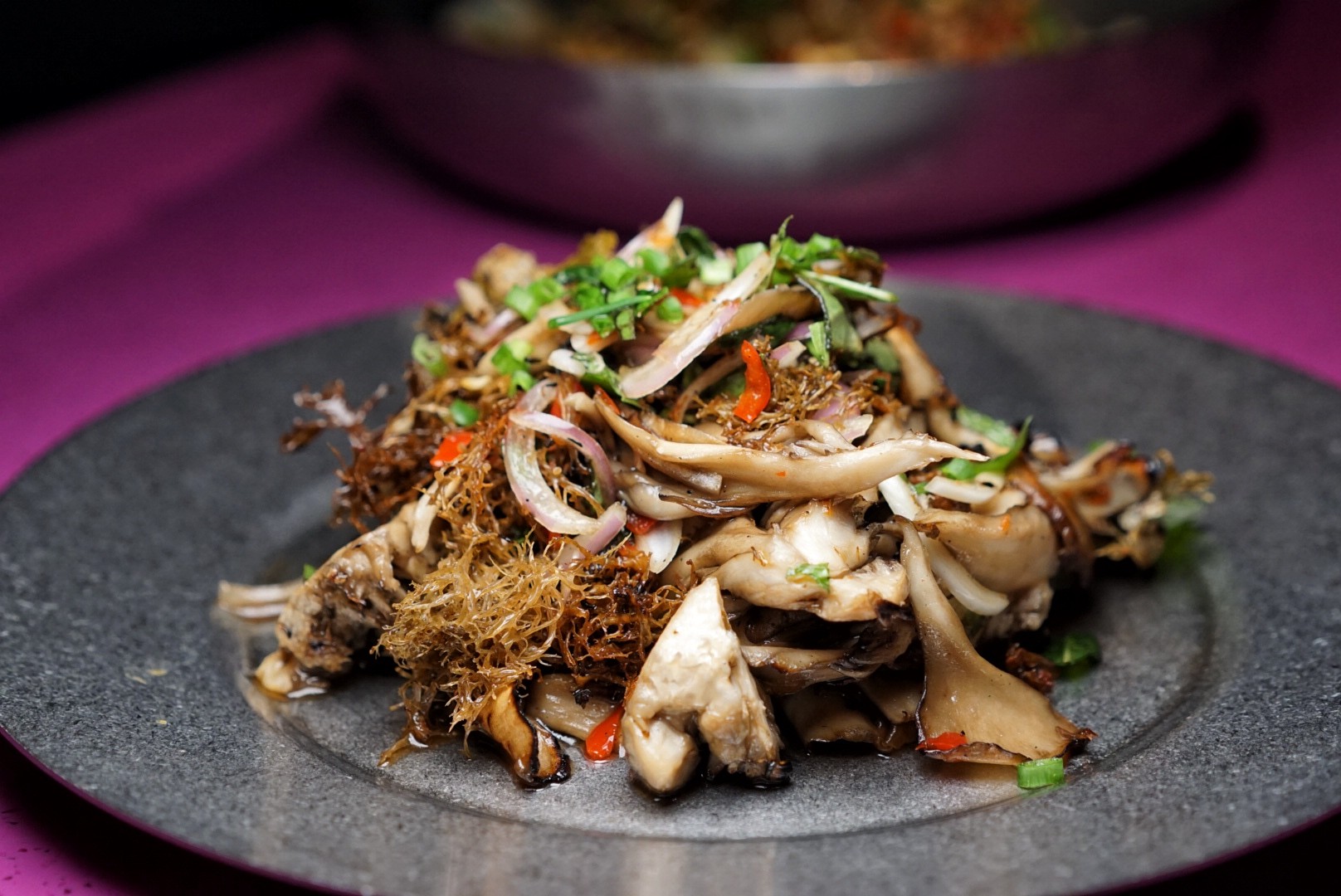 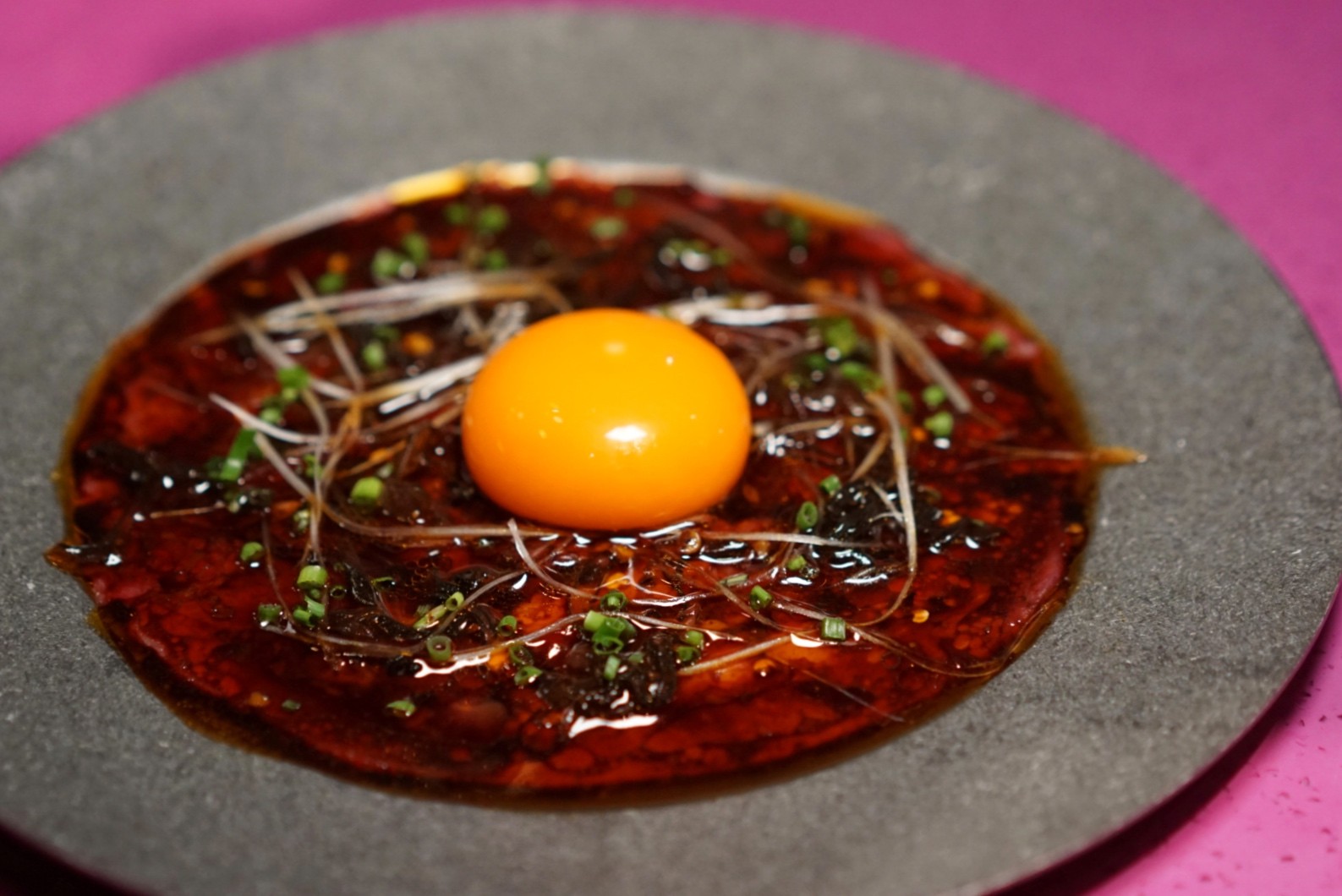 While convoluted regional beef demarcations like Wagyu A5, Kobe, M9, USDA Prime and the like may feel insurmountably esoteric, the Mayura Wagyu M9 Bavette (RMB128) throws it all out the window, the dish fully understood by all those possessing functioning taste buds.

Thin raw ribbons of some of the most premium beef in the world are fanned out like a hot pot plate display and dribbled in a smoked, chili-infused beef fat vinaigrette mimicking a warming beef tallow-based hotpot broth.

A smattering of wood ear mushrooms and fresh microgreens all get slathered together in egg yolky ooze. Smoked over cedarwood, the aromatic Stuffed Chicken Wing (RMB68) is swollen with a Sichuan charcuterie and glutinous rice filling, best enjoyed to the fullest when dabbed with the spring onion and ginger relish that customarily accompanies this traditional Cantonese dish.

The skin is on the flabbier side as it’s poached, so keep that in mind if you prefer crisp skin. As is the case with a few of the dishes, the price falls on the higher side of the spectrum for the Char Siu (RMB138), but you are paying for quality of the cut – Iberico pork in this case, glazed in a honey and Yunnan rose sauce, roasted over charcoal, resulting in scorched, crackling edges. 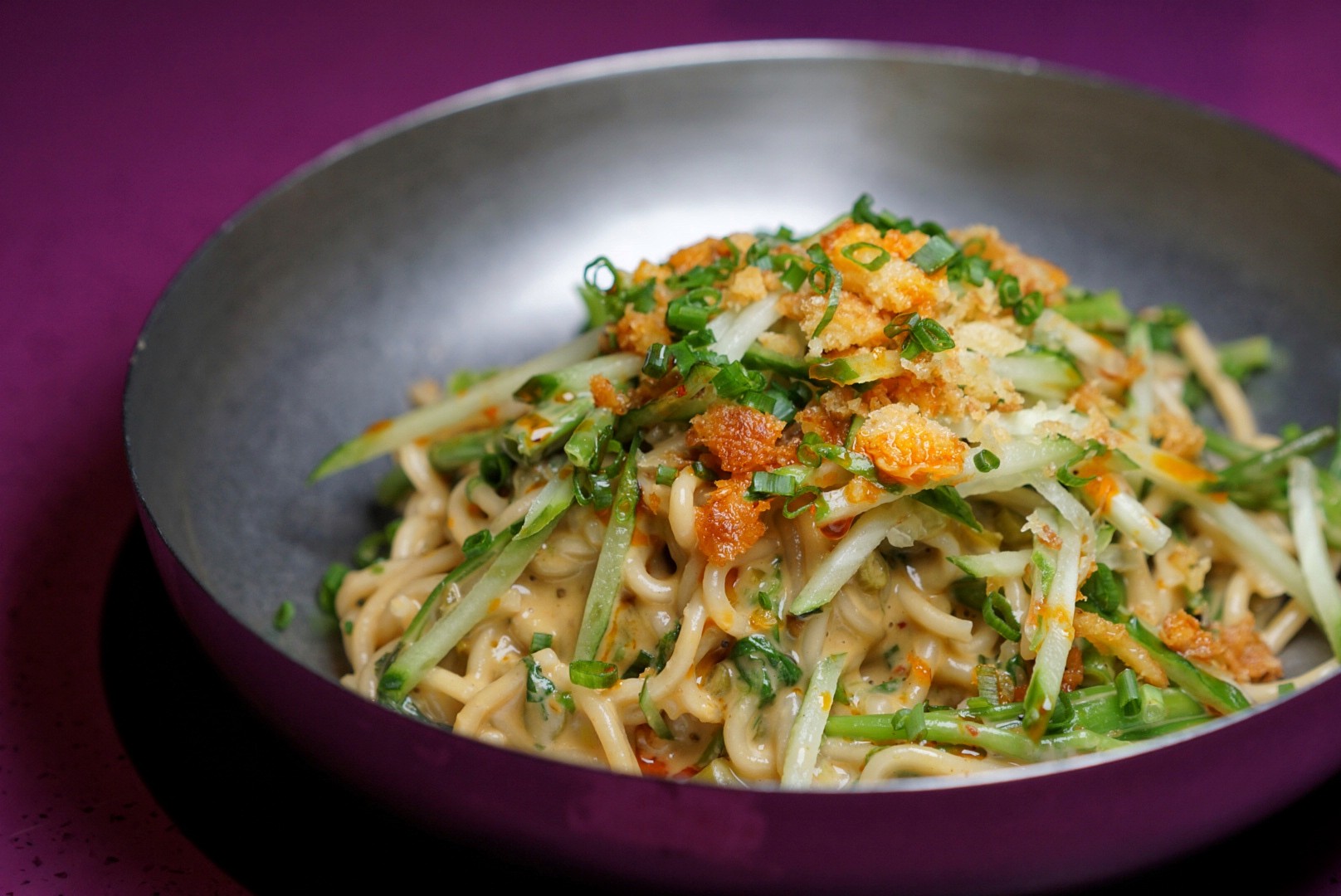 Julienned cucumbers and a crunchy panko crumble round out this 11/10 homerun of a dish. 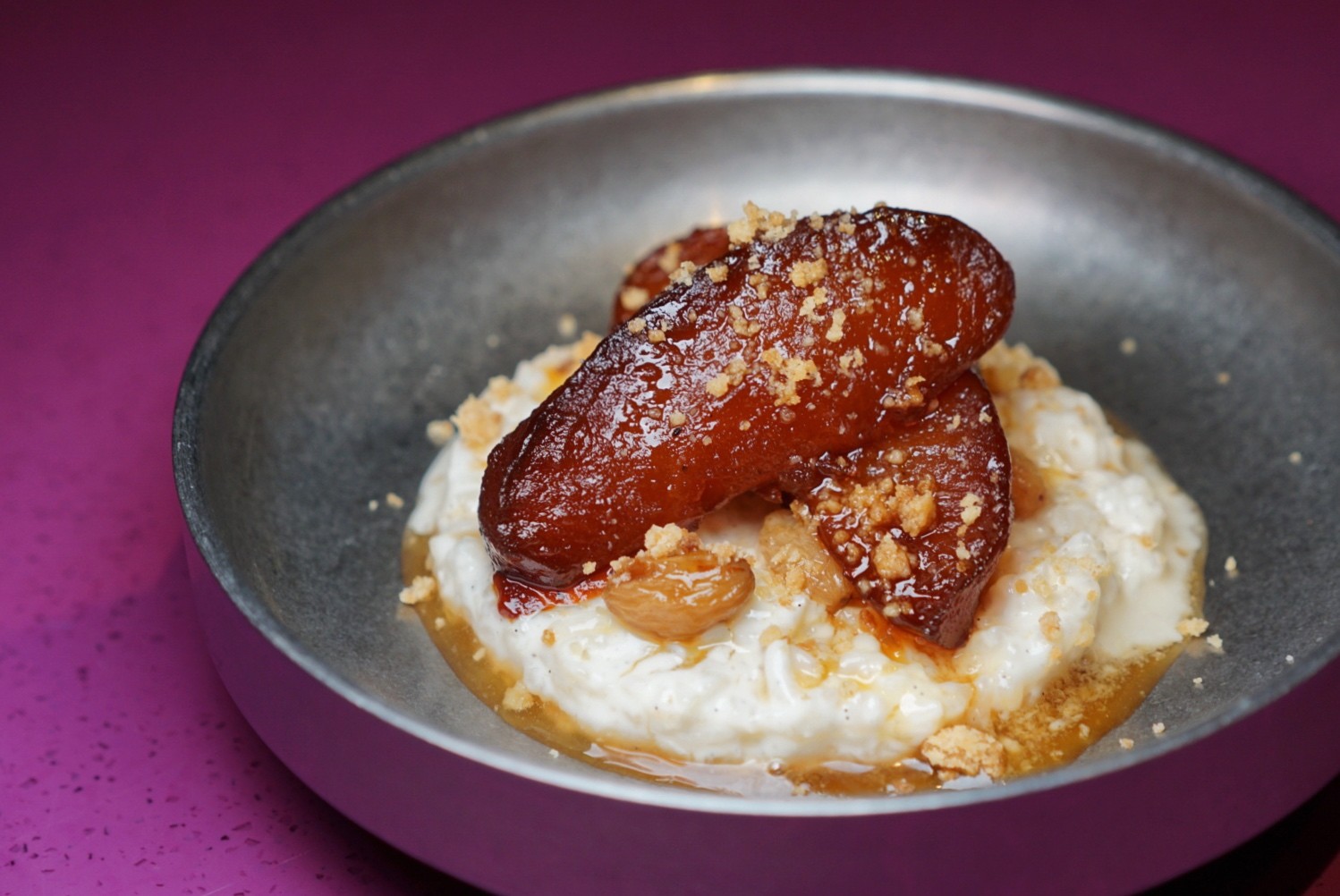 Think of an apple crumble on a decadent rice pudding, then China-fy it to get the Red Braised Apple (RMB58) dessert.

Stewed apples are braised like hongshaorou in aromatics of ginger, star anise, cinnamon, sugar and soy sauce for a mouthful that melts on the tongue like a fatty morsel of pork belly.

But that’s not even the best part. Below it lies a creamy base of rice inoculated with koji spores so that it ferments, bringing forth a funky, natural sweetness that is cooked down into a thickened pudding.

Dehydrated Xinjiang grapes are soaked with Shaoxing wine and scattered throughout for added depth of flavor. The drinks program focuses on natural wines, with a fun mix of casual cocktails for easy sipping.

There is also a cool collaboration with Shanghai's own Sad Gorilla Club beer, for those craving a crisp and refreshing Czech pilsner – the low-key old boy of craft beer in a world so dominated by fruited, dry-hopped, wildly fermented and barrel aged concoctions.

Ingredients like homemade Buddha’s hand-infused vodka is showcased in the Buddha’s Ball (RMB78), blended with black tea and soda, and quince-infused vodka is stirred with Jameson and Fernet Hunter Granit in Hunt ‘Em Down (RMB98) – a booze-forward libation guaranteed to put hair on your chest this winter.

The space is downright cool, hidden off of a back street in that twilight zone maze of alleys between Yanping and Jiaozhou Lu just north of Xinzha Lu, so as to maintain an air of approachable exclusivity. 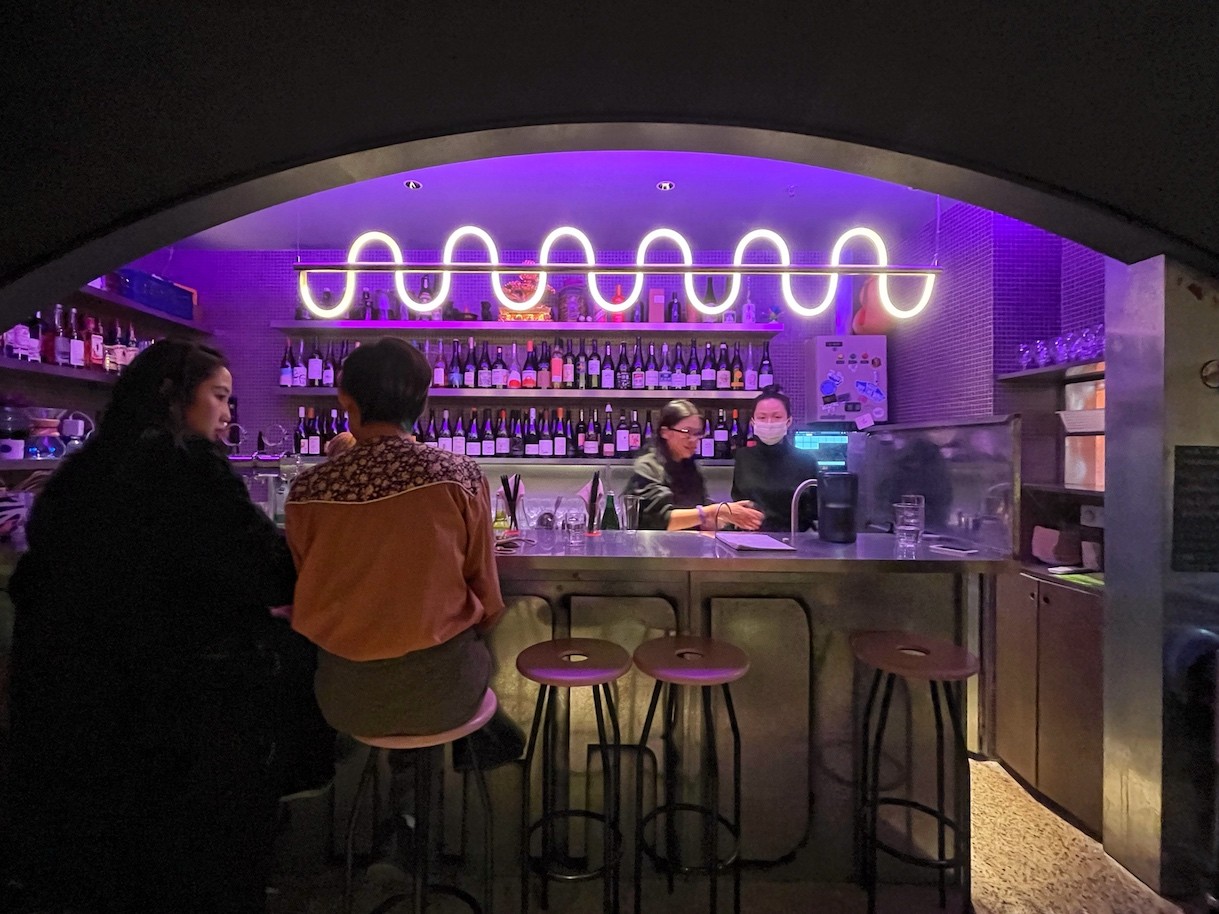 The raw, unfinished cement walls, retro back bar tiling and aluminum branding, coupled with the neon Barney purple color scheme, translate to an edgy, eclectically cohesive space that falls in that perfect sweet spot between niche weird and alluringly trendy.