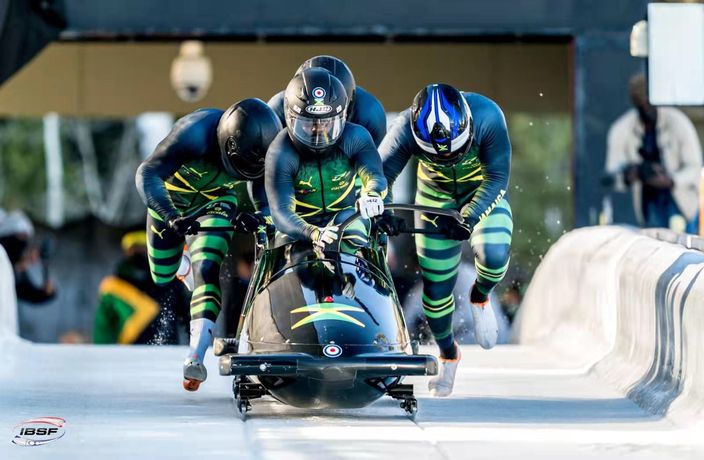 Hearing the name of tropical Caribbean island Jamaica conjures up images of white sandy beaches, rum daiquiris, spicy jerk chicken and Reggae legend Bob Marley, as well as the fastest man on earth Usain Bolt, who ironically set the tracks on fire here in Beijing back in 2008.

Visions of ice and snow? Not so much...

Yet it won't be long until Jamaican athletes compete in three bobsleigh events, and hopefully replicate what Bolt did 14 years ago, except on ice, of course.

For the first time in 24 years, Jamaica will be represented by a four-man bobsleigh team. A two-man team will also participate, something which was seen at the 2014 Winter Olympics in Sochi, Russia.

Beijing 2022 will also see the debut of the women’s monobob with Jazmine Fenlator-Victorian. In addition to bobsleigh, Benjamin Alexander will make history as Jamaica's first Winter Olympic alpine skier. 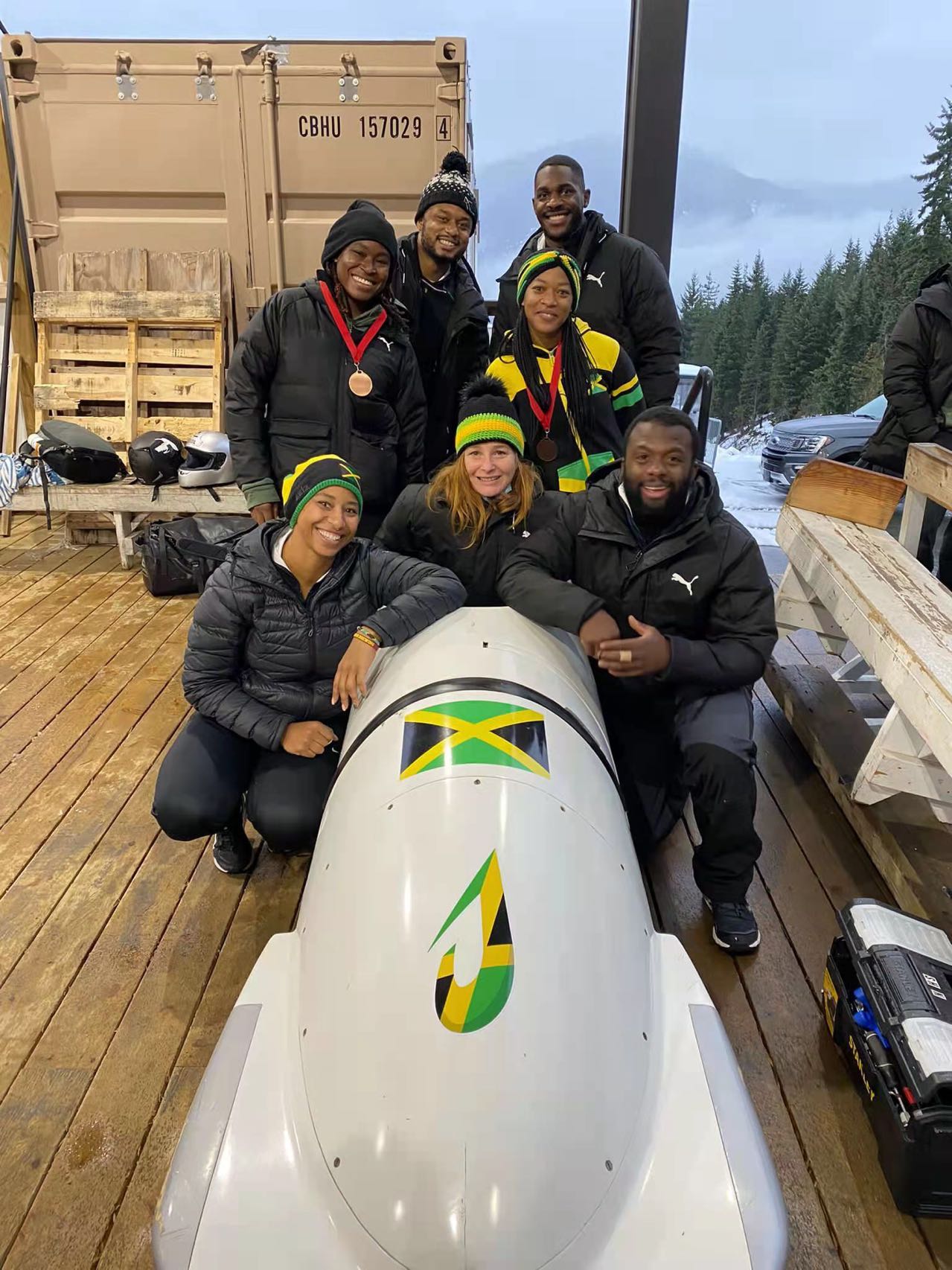 Jazmine Fenlator-Victorian (left) and Lance Corporal Shanwayne Stephens (right) are seen with Dr. Jo Brown (center), as well as (from left to right on the back row) Shadae Green, Ash Watson, Matthew Wilson and Audra Segree. The photo was taken during the awards ceremony in Whistler during one of the previous North American Cup Events

During an online press conference on January 28, 2022, hosted by the Jamaica Tourist Board and the Jamaica Bobsleigh and Skeleton Federation, the Honorable Edmund Bartlett, Minister of Tourism, spoke about the historic achievements of the 2022 Winter Olympic team.

“This is the first time ever in our island nation’s history that we will be competing in three bobsleigh events,” explained Bartlett. “With this achievement, many people are fondly recalling when Jamaica had qualified to compete in bobsleigh back in 1988 in the Winter Olympics in Calgary.

“That original bobsleigh team won the hearts of viewers around the world, and inspired the blockbuster movie Cool Runnings. It is an amazing impact we made on the global scene, not just in entertainment and film, but in giving a definition of Jamaica that lingers.

“On behalf of myself, the government and all our citizens, we are so very proud of you and everything you have accomplished, despite all the odds.” 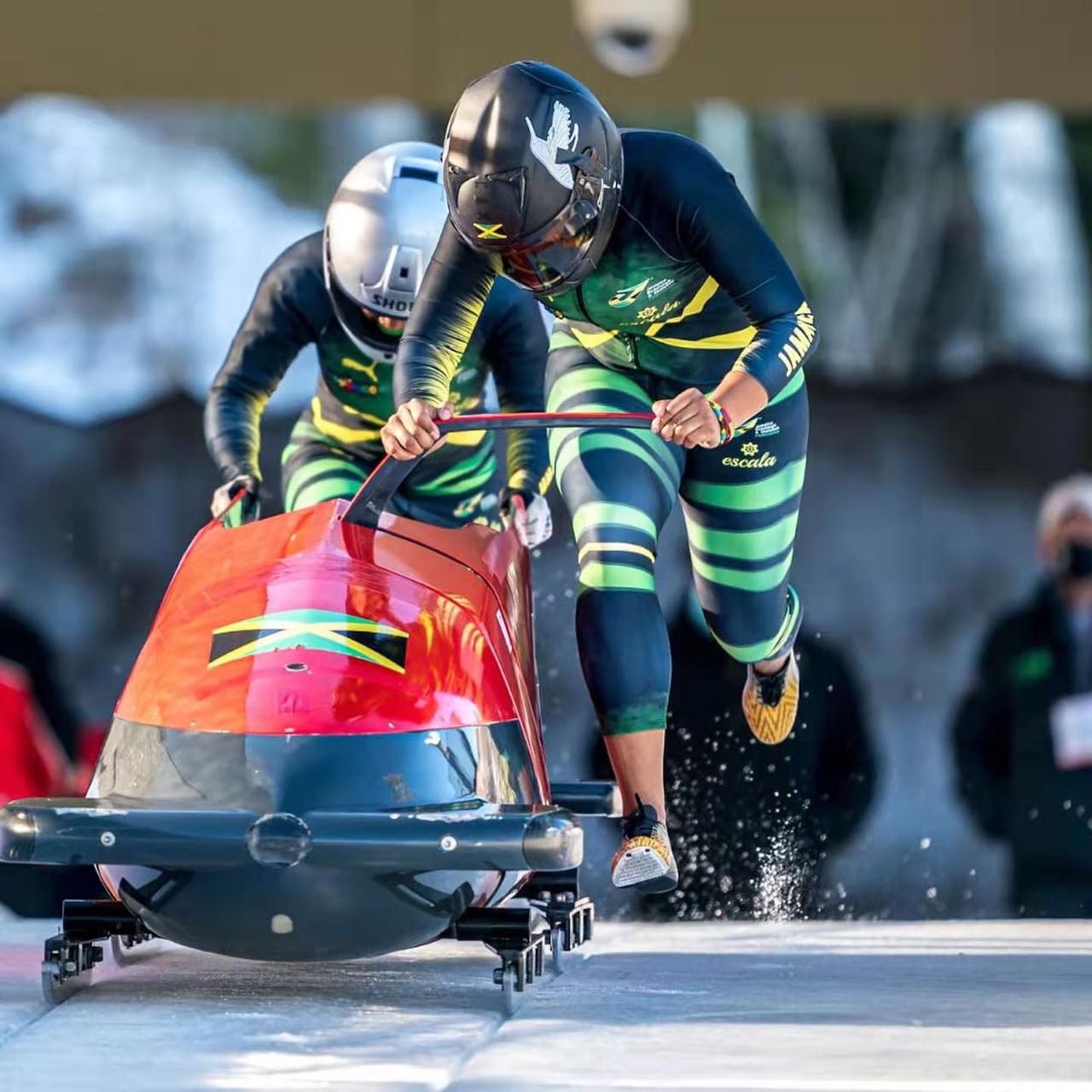 Jazmine Fenlator-Victorian arrives at the airport in Beijing

The team arrived in Beijing on January 29, and That’s had the rare opportunity to speak with the pilots of the monobob, Jazmine Fenlator-Victorian, and the men’s team, Lance Corporal Shanwayne Stephens.

Despite the tragic passing of her younger sister Angelica in December, Fenlator-Victorian is set on making her sister and her country proud.

“It’s been a challenge, physically and emotionally. I miss her. She was my biggest supporter. My sister had this big Jamaican flag in her room and I asked my mom if I could take the flag with me to China. It would be like having my sister with me on the journey,” said Fenlator-Victorian pensively.

Fenlator-Victorian is no stranger to the Olympics. Born to an American mother and a Jamaican father, she began her career in bobsleigh in 2007, serving mostly as a brake woman on the American bobsleigh team.

She was then selected as one of the three pilots for the American Olympic Bobsleigh team to represent the country in the 2014 Winter Olympics in Sochi, Russia.

However, in spite of her role and her significant contribution to Team USA’s success, Fenlator-Victorian switched teams during the latter half of 2015 in order to represent her father’s country, Jamaica.

Having been accustomed to Olympic training facilities and housing in the US, she recalls how difficult things were with limited funding and resources.

“Bobsled is mainly popular for the Cool Runnings movie (which is based on the original Jamaican bobsleigh team) and most people around the world really only tune in to watch and cheer every four years during the Olympics,” remarked Fenlator-Victorian.

“They forget we compete every season, develop to be the best of the best, and have a world championship final every season. It is imperative to have sponsors and resources for a sport in which a sled can cost over USD50,000, in addition to other equipment and sled transportation costs.

“Jamaica Bobsleigh and Skeleton Federation is still working on funding; you can follow on Twitter @JBSFed if you want to support. There is still a huge disparity of funding for smaller nations and it is a great feat to even compete amongst the best of the best.”

However, in spite of the immense challenges, Fenlator-Victorian and Carrie Russell, a Jamaican track and field sprinter, made history as the first two-woman bobsleigh team to represent Jamaica and the Caribbean in the 2018 Winter Olympics in Pyeongchang, South Korea.

For the 2022 Olympics, Errol Anderson, a Jamaican who currently resides in Denver, Colorado, launched a games company called Popongo. He signed on as the team’s sponsor late last year. PUMA and Ozark, a Swiss founded and Chinese owned winter sports company have also come on board as sponsors. 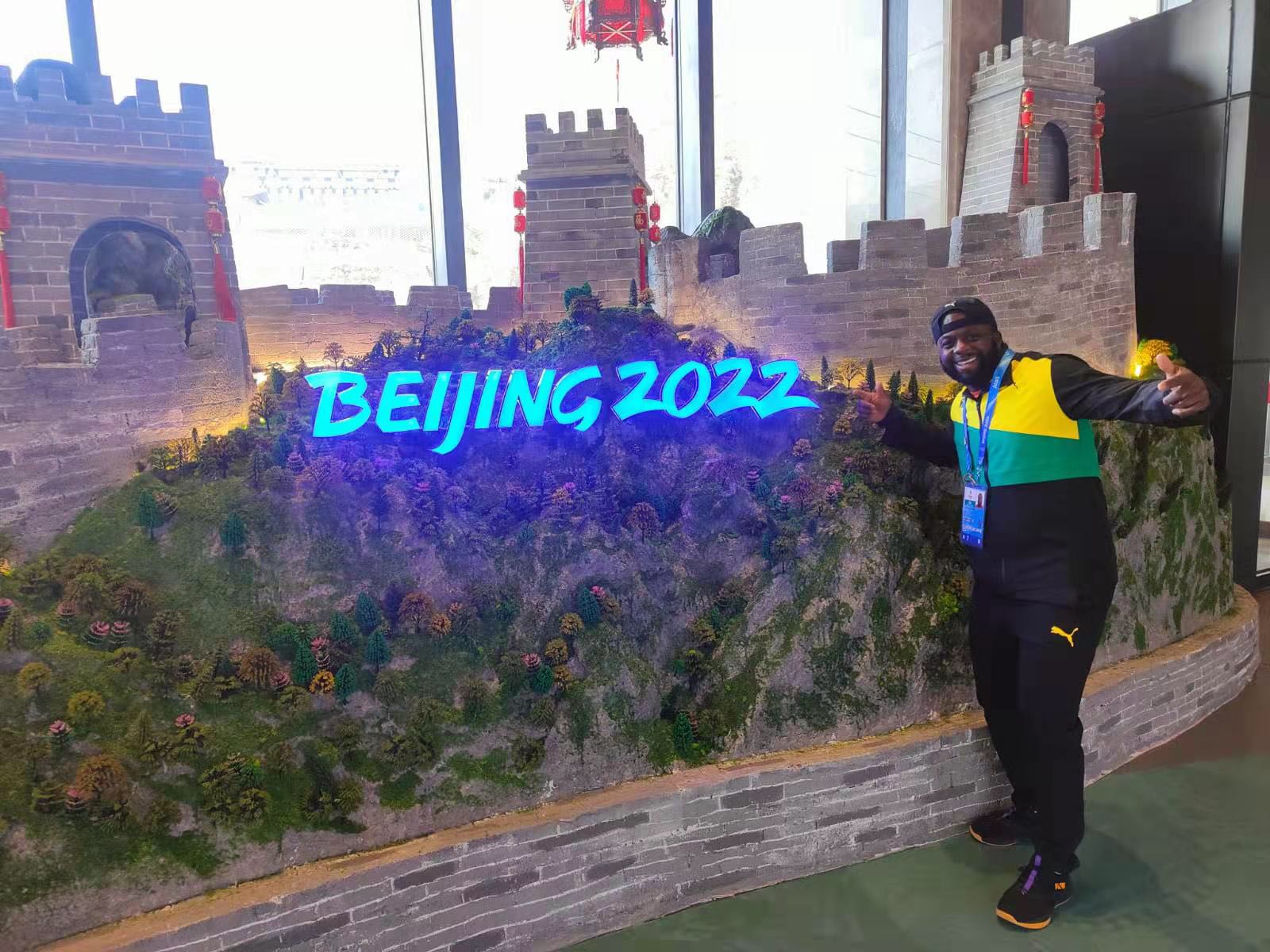 That’s also sat down with Lance Corporal Shanwayne Stephens, the pilot for the four-man bobsleigh competition. His team members include Matthew Wekpe, Nimroy Turgott, Ashley Watson and Rolando Reid. The remaining positions will be decided when the team has had a chance to see the course.

Having been born in Jamaica, Stephens migrated to the UK with his mother and sister aged 11 years old. By 21, he had become a member of the Royal Air Force (RAF). In 2015, he became involved in inter-service bobsleigh competitions between the RAF and the British Navy’s team.

As luck would have it, an influential call got him in to the trials for the Jamaican bobsleigh team in Calgary, Canada. What was supposed to be a two-week trip ended up being four months of full immersion in that year’s North American Cup.

After narrowly missing qualification for the 2018 Olympics, Stephens was even more determined to qualify for 2022. He signed up for the RAF’s Elite Athlete’s program, enabling him to fully commit himself to training for the 2022 Winter Olympics.

His unconventional training methods, including pushing his fiancée’s Mini Cooper up and down his neighborhood’s road in Peterborough during the COVID-19 pandemic, got a genuine laugh from Her Majesty Queen Elizabeth II, during an online interview with her Kingdom’s defense personnel.

When asked for advice for those aspiring to engage in winter sports, Stephens has plenty of words of encouragement.

Mrs. Melissa Pryce, Chargé d’Affaires of the Embassy of Jamaica, Beijing, offered words of praise and encouragement for the country’s athletes.

“I am personally overwhelmed with pride at the accomplishments of our athletes,” said Pryce. “I watched in wonder as they, through their own sweat and determination, tested the limits of human endurance in temperatures of which we are not accustomed and trained harder than any of us can scarcely imagine.

“The team members all have unique stories of triumph over adversity and achievements by sheer force of will. Team Jamaica is a living symbol of hope and an affirmation of the human spirit to persevere against all odds.”

Fenlator-Victorian, Stephens and his team are now actively preparing within the Olympic Village in Beijing.

“We, as Jamaicans, we are so proud of our heritage,” said an excited Fenlator-Victorian. “To be an all-black team representing an all-black nation in winter sports is huge!”

The Beijing 2022 Bobsleigh competiton takes place February 13-20 at the National Sliding Center, Yanqing Zone. You can read all about it right here.

Follow #HottestThingOnICe on social media for the latest on the Jamaican Winter Olympic team, including on Wechat and Douyin by using hashtags such as #JAonIce, #CoolRunningsJA and #JABobsleigh.

[All images via Vicki Cann]