My initial review of 404 back in January was full of 'constructive criticism,' and caused a bit of a stir – some agreed with my gripes, while others found them unwarranted (and were quite vocal about it). My points, however, were ones that I felt, as a paying customer, were fair to be made known. Going into each of my first few times dining there, I personally expected more from 404 because chef Blake Thornley’s name, as a part of the Oha Group (Oha Eatery, Bar No. 3, Pass Residence, Dead Poet, Maolago) is associated with the restaurant.

Oha Group is a collective of imaginative restaurants and bars that people equate with pushing boundaries, and chef Blake is the mastermind backing these avant-garde menus.

A true mad scientist at heart, his food is typically thought-provoking, inventive and downright wild, but in a slightly restrained way that makes it approachable to a broader audience. He’s not afraid to tinker with ingredients, even if that means making mistakes sometimes; his food and personality are equal parts pace and passion. 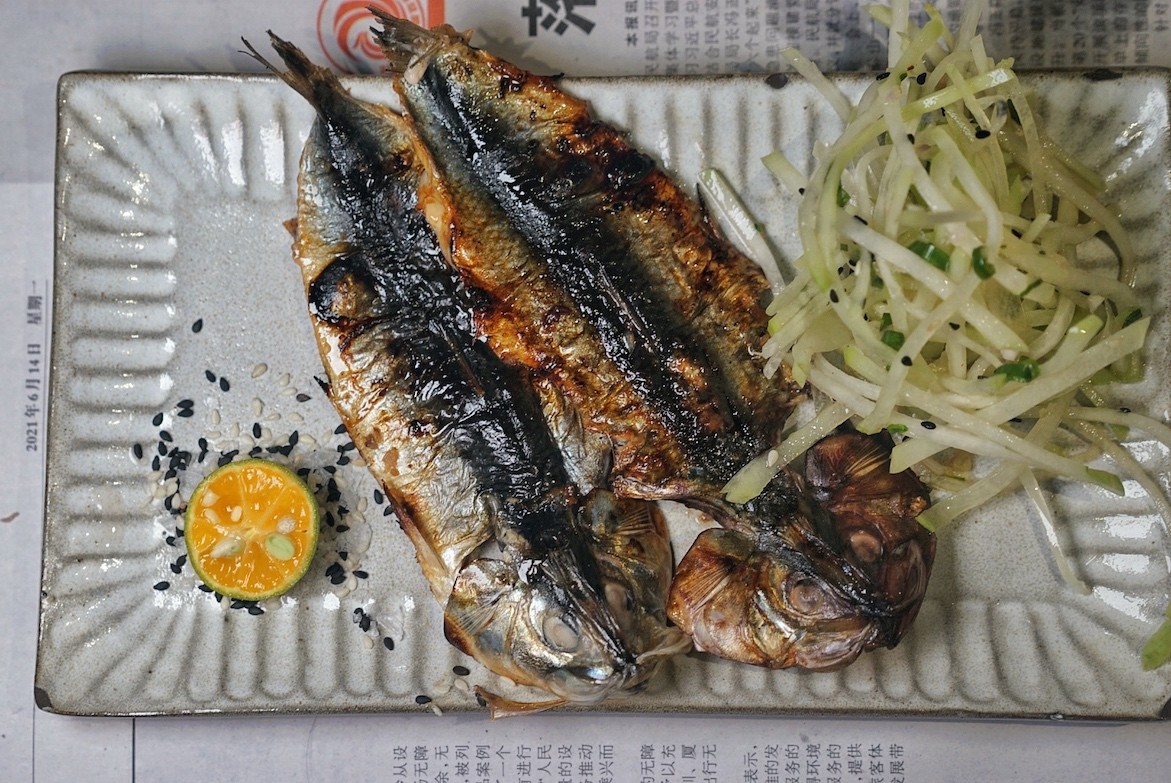 But during those first visits to 404, I missed that grit, that ingenuity, that signature shock to the senses and was left with dishes that hit barely one note.

There was no egregious error, just a culmination of small missteps that underwhelmed me, especially when associated with a group I highly believe in, not only for its creativity and willingness to push boundaries, but primarily because chef Blake is someone who has time and again served me meals that exist as standouts, including one of the best meals of my life at the now closed Table Black. 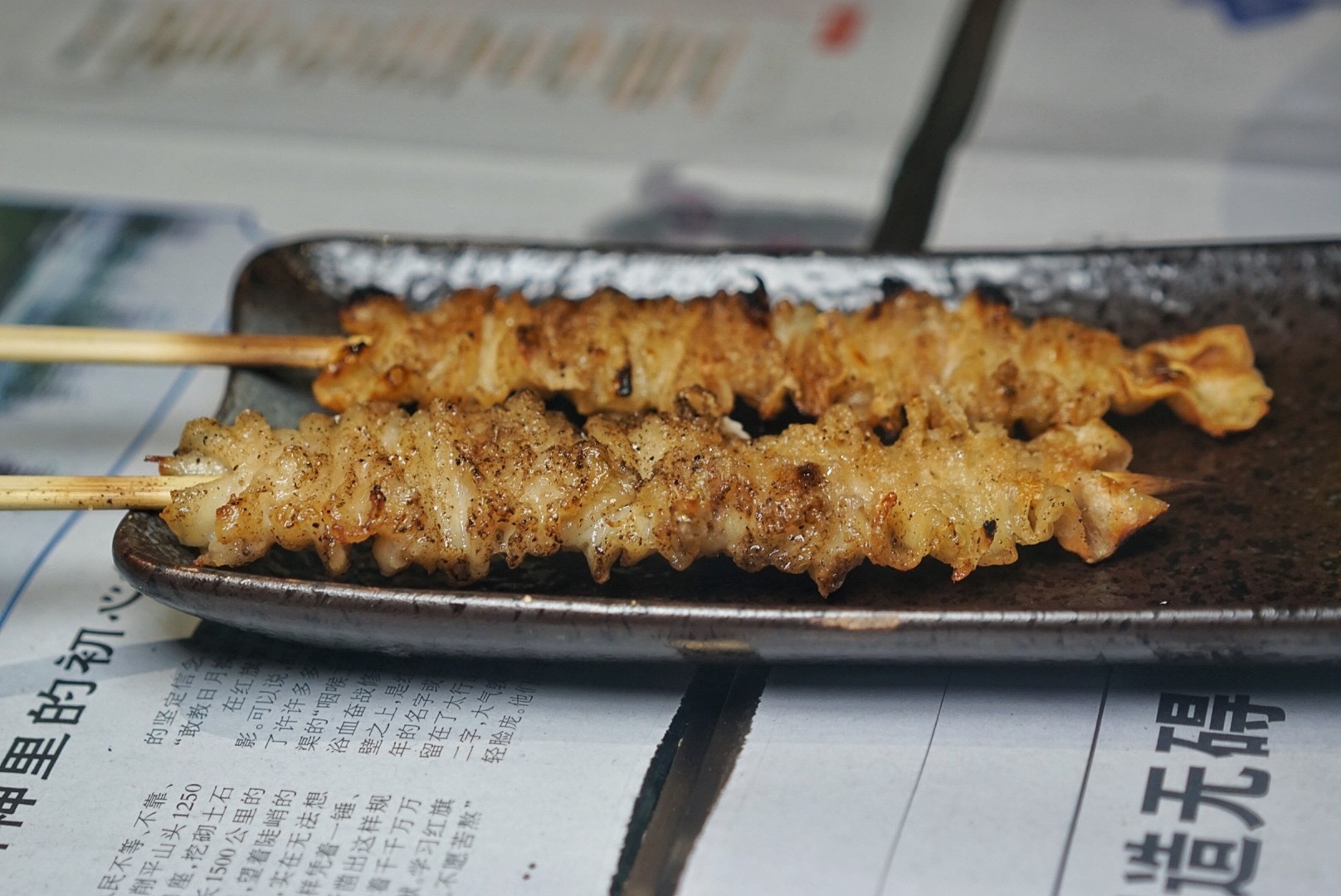 However, in recent months multiple people – people who shared my initial view of the restaurant – urged me to go back for a revisit, claiming there had been a turnaround. And, who doesn’t love a good comeback? First round snacks, like Shaved Radish & Pear (RMB18) arrived, and within nibbles I thought, “Here we go. Here’s Blake.” Fresh slivers of said radish are stacked high, dressed with a nose-tingling wasabi and sweet soy sauce.

Light and refined, the dish still sports surprising nips of dried kombu seaweed – firm like smoky pieces of beef jerky – and then all of a sudden there’s fragrant pear. It really works. 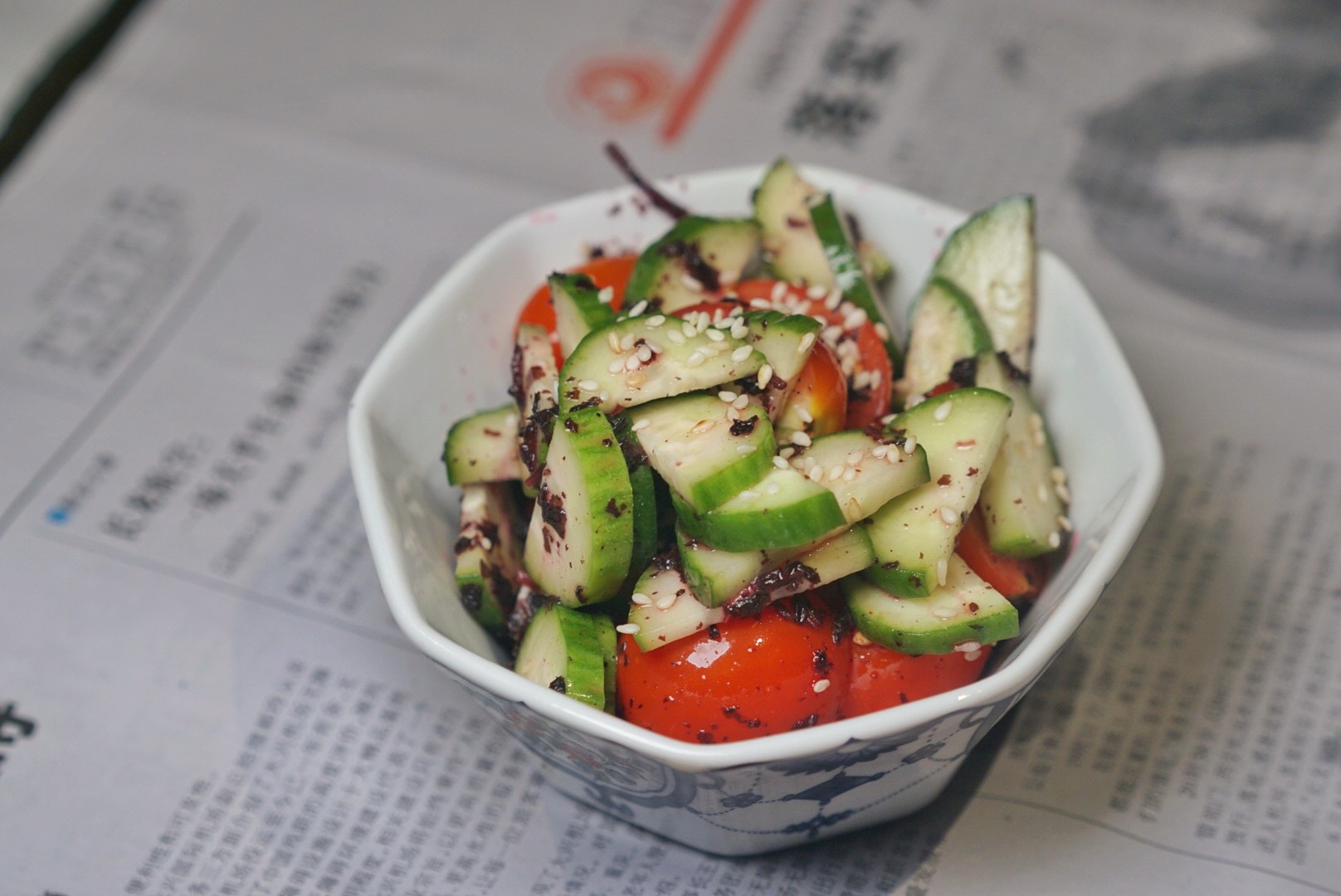 The modestly named Cucumber and Tomato (RMB25) is anything but modest, with pickled ume vinegar and shrizo salt for a zippy punch. 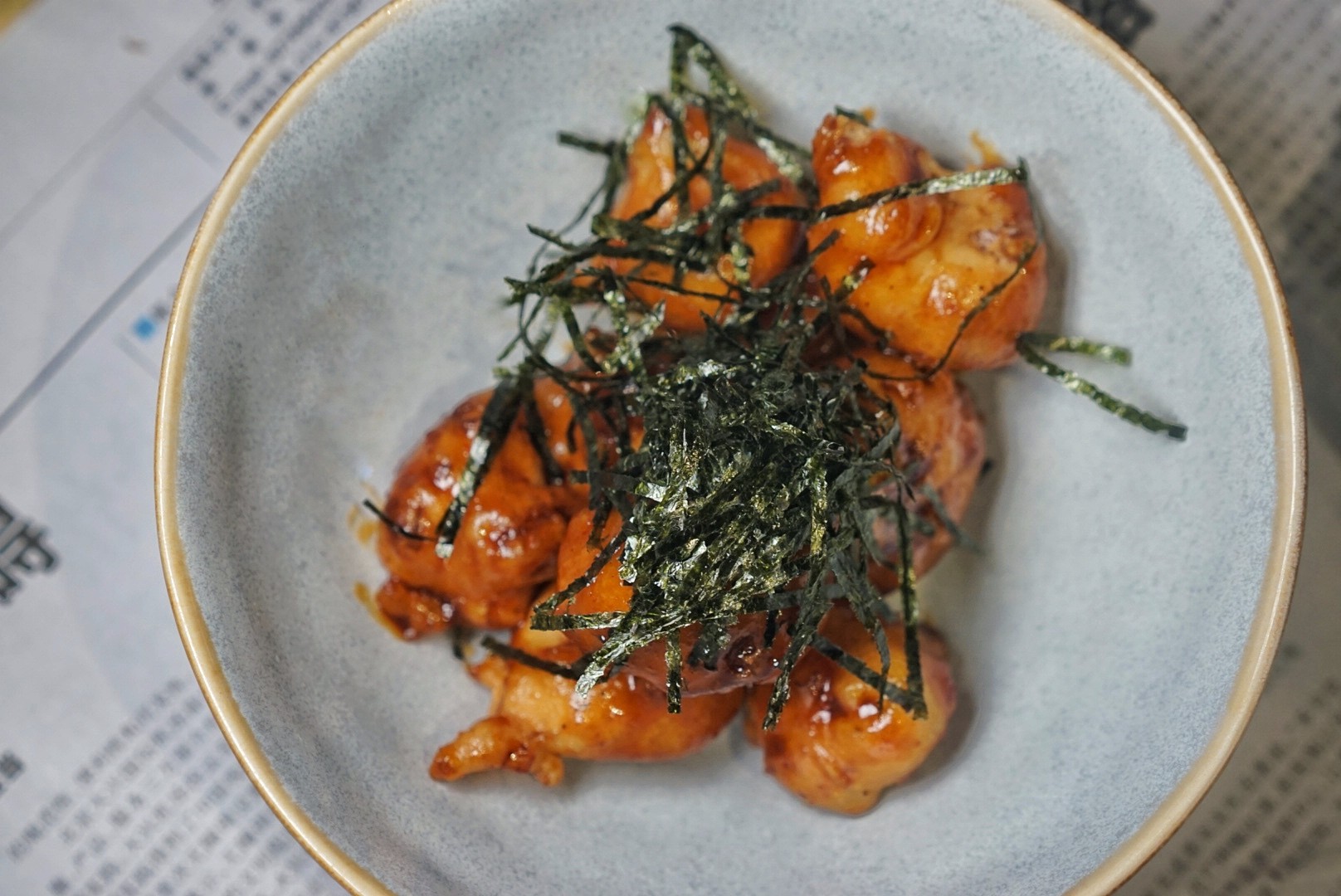 Revisited starters like Fried Cauliflower (RMB38), a previously unremarkable bite, now reveal pillowy clouds of florets encased in a shatteringly crisp crust. Tangy with a slow-burning heat, the syrupy sauce that coats the outside is an excellent balance of spice, sour and sweet. Charcoal grilled plates that skewed towards over-charred now are served with taut, crisp skin that pulls away to reveal juicy tender bits of flesh.

Large chunks of Chicken Thigh (RMB15) are flecked with mujiangzi, a spice grown in Guizhou, Sichuan and Yunnan that resembles black pepper, but unfolds into a woody aroma with a slightly floral aftertaste.

When used in excess, the resulting flavor can be off-putting, like a bar of soap, but that deft-handed sprinkle on the skewer is interesting and unlike any flavor combination you’d find elsewhere. 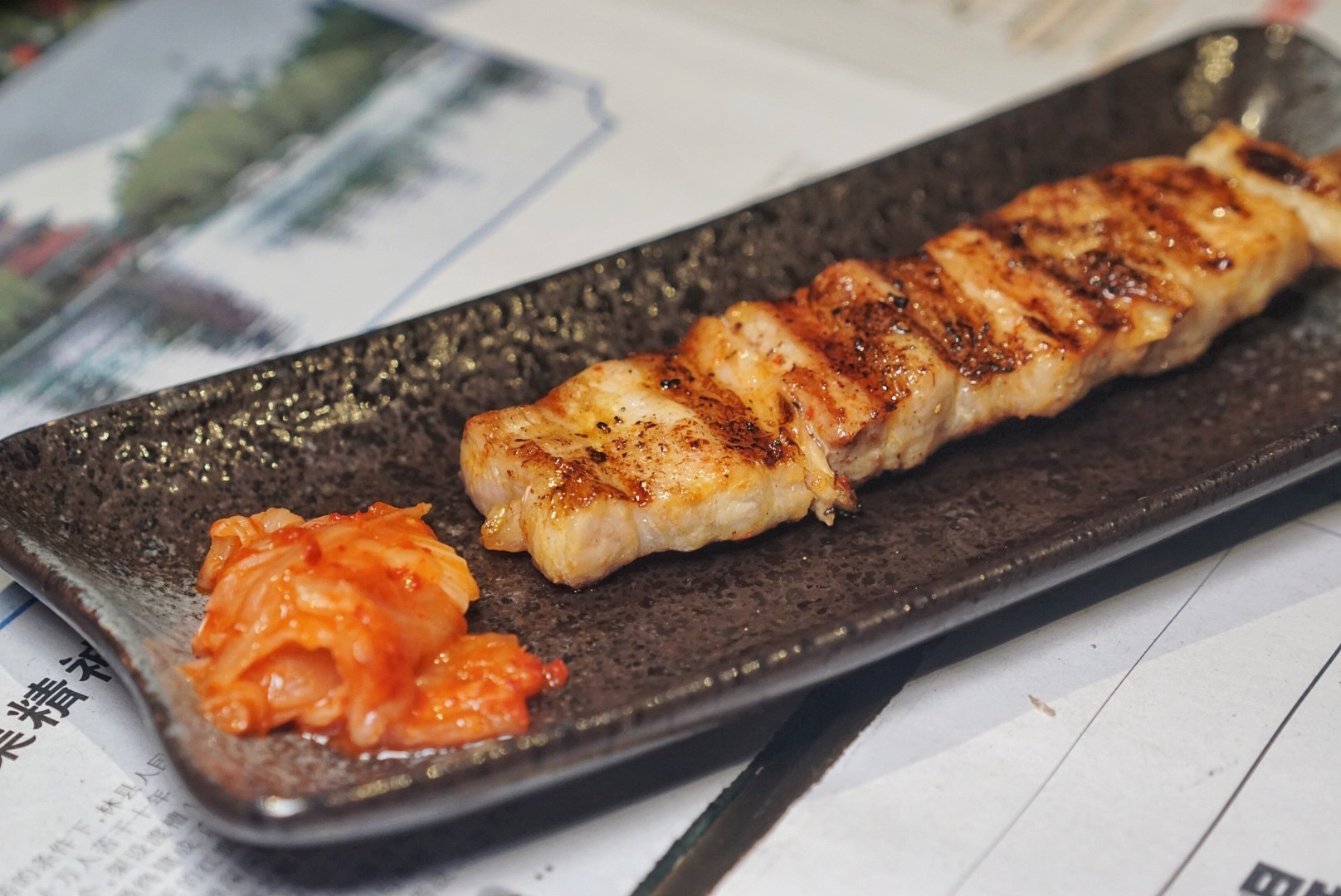 Fat-dripping rolls of Pork Belly (RMB15) are balanced by some of the most pungent homemade kimchi we’ve been lucky enough to sample, while rippling ribbons of Chicken Skin (RMB10) are unctuous, bursting with salt-laden indulgent flavor, a direct contrast to their flabby counterparts of a 404 past. Equally springy and succulent, Monkey Head Mushrooms (RMB12) could convince the most devout of carnivores they were eating meat. 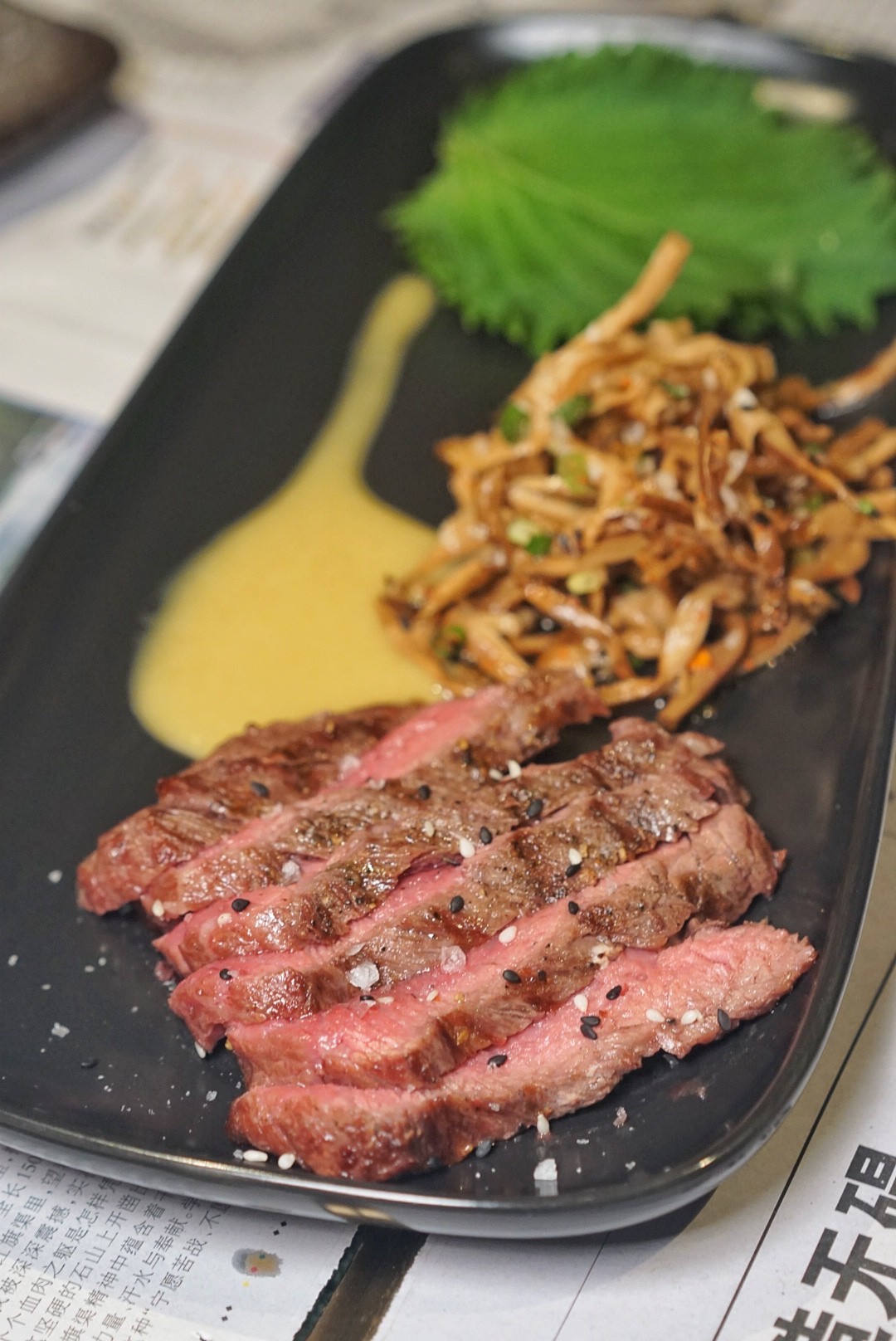 Charred Wagyu Bavette (RMB120) sees an interesting pairing of sweet mustard with smoked baby bamboo shreds. Roll together a slice of steak with the neighboring condiments in a shiso leaf for an unexpected pairing in both texture and flavor, where each element enhances its unlikely plate-mate. Alas, not everything was perfect. We’re not asking for too good to be true here, folks.

The Pork Jowl Smoked Eel (RMB18) was mushy, with the fat of the jowl overpowering the eel, serving as the predominant flavor.

Similarly, the Tempura John Dory (RMB88) sports exactly what it advertises, but at the end of the day, it’s essentially just a glorified (and small) portion of fish and chips, with large pieces of somewhat bland, though pleasantly crunchy, potato chunks.

Nothing abominable – just wouldn’t choose to reorder these when I do return. 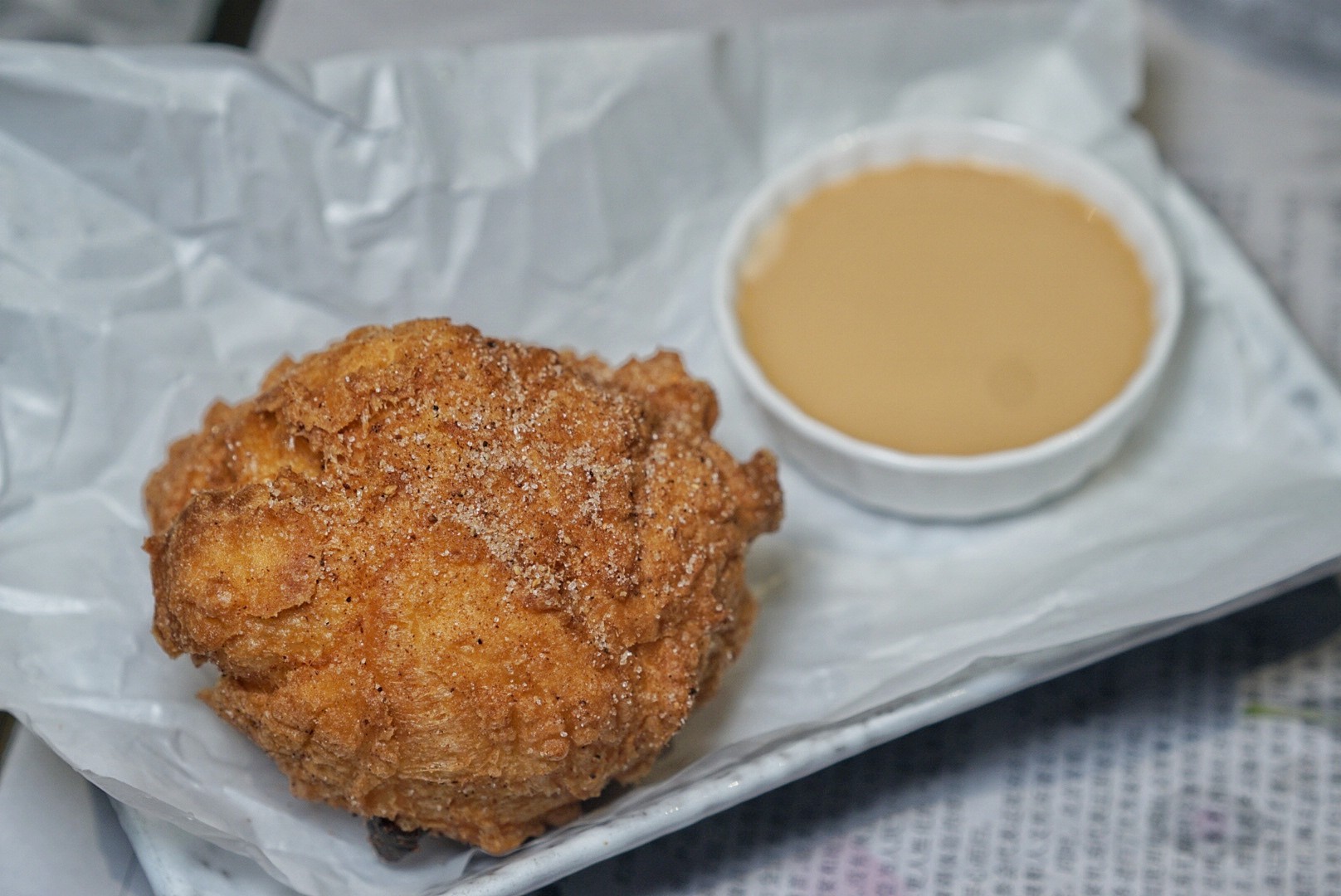 We skipped dessert last time, frustrated and still somewhat hungry. This time around, we ordered every one of them on the menu.

A Fried Sweet Choux (RMB12) is dusted with cinnamon and sugar, served hot with a salted caramel dipping sauce. Although seemingly dense at first glance, it breaks apart to reveal its hollow center, a sweet nibble to end a filling meal. Outside of the food, the service could not have been more polar opposite than during our last 404 experience; friendly, well-trained staff ensured we always had full waters, clean plates and timely attentiveness, without being overbearing.

Food suggestions were helpful, menu descriptions enlightening and when we had questions about specific ingredients, the chef came over in person to answer them, and share a cheeky post-meal drink with us.

Shanghai has over 100,000 restaurants, roughly 12,000 of which relate to foreign cuisine. If you visited one for each meal a day, it would take 10 years, 11 months and 16 days to dine at them all. So I’m not inclined to waste my time (nor stomach space) on something I don’t believe warrants a revisit. I am optimistic – along with the majority of people working in the Shanghai F&B industry – that in time, the city’s dining scene will match up against other behemoth foodie cities like New York, London, Singapore or Tokyo. Sometimes it many need a little nudge, a rough truth – some constructive criticism – to continue to push it forward, as a whole.

The potential was always there with 404, shown through other successful Oha Group outlets like Maolago, a restaurant that I’m not alone in thinking could crush the dining scene in any top food city in the world.