The Wild West of China is vibrant, modern and historic, all at the same time. The laid-back city of Chengdu represents all these aspects, from trendy, up-scale shopping centers in the heart of the city to ancient walls and structures that form the base of the city’s history.

Just like the yin and yang of white and red hot pot that is ubiquitous in the city restaurants, one needs both sides of the spectrum to achieve a perfect balance. Spicy and savory – too much of one leaves the mouth too salty and desiring more, too much of the other leaves a poor soul with satisfied taste buds but a blown-out butthole the next morning. 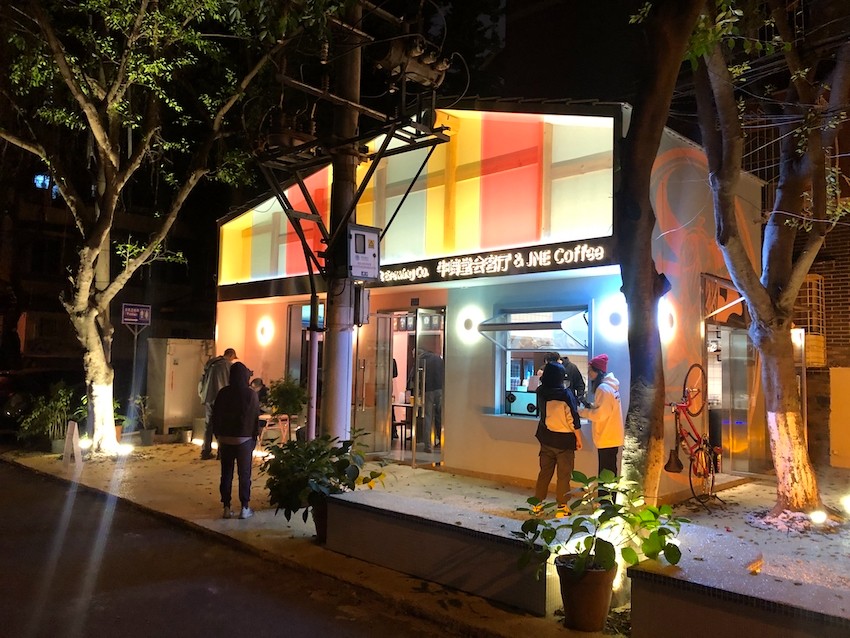 With only a couple days to take in the scenes, smells and flavors, I reached out to my friend, Scott Hunt, owner and head brewer of Wild West Brewing. Cheerful as always, Scott immediately slapped a cold beer in my hands and dragged me to his favorite spicy BBQ fish restaurant, just a stone’s throw away from his taproom in Yulin.

Stepping foot into the restaurant, the decor is similar to any other street-side barbecue joint. We walked up early before the dinner rush, and the da laoban was outside gnawing on a toothpick as if waiting for us to arrive. Once my person permeated the walls of the restaurant, it was abundantly clear this wasn’t a standard BBQ fish joint. A massive blast of aroma filled with cloves, peppers, garlic and other spices shot up my nostrils, tickling my salivation glands. I couldn’t wait to get this meal started.

We sat down and cracked open Scott’s first beer, the Cloud 9 IPA. A solid hazy ale with passion fruit and tropical notes rising up from the glass. He topped off our tiny beer glasses, cheers’ed and officially began the dinner. The fish is cooked directly at the table in wax paper, a peculiar sight for this bearded beer drinker. Packed with garlic, peppercorns, chilis, herbs and every other famous Sichuan spice, the hearty fish is served with savory sides of beef, potato, lotus root and quail eggs. The server ripped open the wax paper and dumped all the contents onto the table, a pre-recorded ceremony she could do with her eyes closed. Masterfully twisting and turning her wooden spatula, she flipped the fish to reveal a crispy and caramelized side that was ready to be devoured.The beers were going down fast and the food was leaving me thirsty for more. Next, Scott cracked open the Tianfu Wheat, a hop-forward wheat ale that went perfectly with the BBQ fish. The wheat ale didn’t nullify the spicy peppers, but instead rode along with them to the depths of my throat, with the hops providing a bitter and fruity balance to make it a smooth ride down into my belly. A refreshing break from all the spice. That fish was something magical, but unbeknownst to the Bear, Scott had another surprise lined up. NBeer, the endlessly creative brewery out of Beijing, was introducing a small collaboration with Wild West that evening. Scott had worked with XiaoBiar from NBeer to create two versions of a mala oatmeal stout, one brewed with red peppers and one brewed with roasted green peppers.

There was also a mala sour ale brewed with DaoBrew. The sour mala beer has a very strong fruit aroma resonating off the top – peachy and pineapple. It sips like a fruity sour ale, but then has a smokiness that build’s into a spicy heat and strongly lingers on the back of the tongue.

Most spicy beers like this are novelty, and usually the consumer can only take a single small glass before flavor fatigue sets in. However, the DaoBrew collaboration beer was one that was extremely balanced and quite sessionable. “We used a very fresh crop of red lajiao, which has a super intense flavor and numbing component that is BIG!  We used that throughout the entire beer. After fermentation, we separated the batch into two secondary fermenters, one of them getting a fresh red Thai chili that was grown in Sichuan, and the other beer got fire roasted green chili that we roasted by hand with a torch. Ultimately, there is a tiger skin chili version and a fresh red chili version.”

The second beer, the red chili pepper mala stout relentlessly blasts the nostrils with the waijiao, followed closely by a touch of roasted coffee and chocolate notes. A savory stout that is a polar opposite of a sweet imperial stout, it has a slow and low burn that also sits on the back of your tongue, smoky and gorgeous, like a handful of chocolate covered red peppers. That numbing sensation rests on the back of the tongue slowly creeping up to the front, a fantastic spicy sensation, but not a beer I would drink regularly. Lastly, the roasted green chili mala stout carries an earthier and more herbal aroma. Wonderfully balanced, this beer has a smoky, roasted touch that is light on the tongue but swirls around with chocolate and coffee flavors. The oatmeal really smoothes out the spiciness on this one, and the hint of woody notes top it all off. This is an extremely crushable beer and would make for an interesting dessert pairing. Sounds like I’ve got myself a theme for the next beer and food pairing!