The cosmopolitan metropolis of Shanghai offers some of the world's most diverse food options. Master chefs and restauranteurs from across the globe found their opportunity to strike edible gold in the city, leaving the hungry citizens with a plethora of dining options.

With so many worldly cuisines available, Shanghai is the ideal place to find that perfect pairing... food pairing that is! Finding a significant other in this party animal landscape can be a bit more tricky.

Regardless, the Bearded Bear strives to seek out creative and flavorful food and beer pairings in his newest series, Merry Matching! In these article arrangements, the Bearded Bear will be sitting down with some of Shanghai's finest chefs with a curated crop of craft beer and examining what tasty treats match up wonderfully with different bodacious brews. 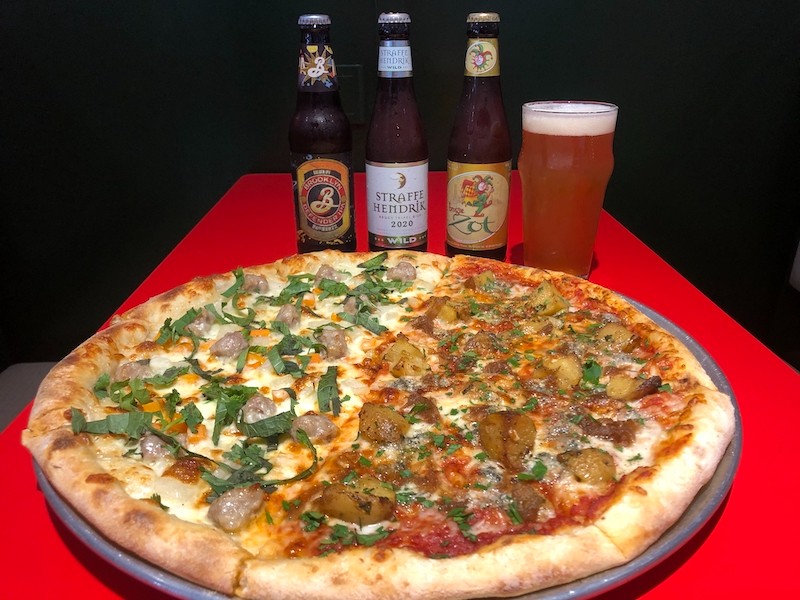 This week, the Bearded Bear sat down with the king of creative pizza pies, Nat Alexander from Homeslice. With two new seasonal pies on deck, there are plenty of opportunities for fresh pairing ideas.

The first pizza on deck is the Bun Cha, based on a Hanoi noodle dish of the same name.

Nat: Created by guest chef Danny Gao from Shake and Bun Cha Cha, Bun Cha is Hanoi’s signature noodle dish with grilled pork, pickled vegetables, and heaps of fresh herbs that we converted into pizza form! Using a variation of Homeslice's creamy white sauce that swaps out seasoning for Vietnamese fish sauce, the Bun Cha is rich and savory with refreshing herbs to cool down that creaminess. Truly a delicious slice all on its own, but with the right craft beer, this flavor rocket can reach new heights.

BB: The vegetables really help to space out all the luscious flavors. Focusing on the pork and white sauce, the Belgian blonde ale, Bruges Zot, was the first pairing selection, due to its strong malt backbone. Pork and malty beers tend to pair nicely. Belgians also tend to be highly carbonated, thus do well to cut through the rich white cheese base and mozzarella. 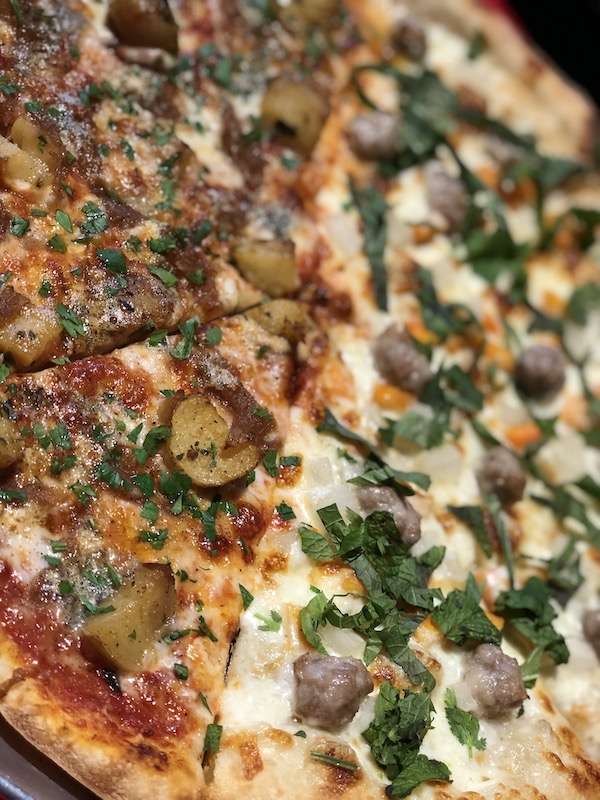 Nat: You can almost get some roasted pineapple a little bit at the end of it, interesting. Even when no fruits are added to beers, a good pairing can help bring out tangy esters, which often carry fruit-like flavors.

BB: Esters are a chemical compound created during the fermentation process that can add interesting flavors to beers that were not part of the ingredients. It’s how some wheat beers can taste like bananas, without having any actual bananas inside!

This ended up being a good pairing, but the herbs on the pizza played a larger than expected flavor role that overpowered the beer. The Bruges Zot doesn’t have any strong hop flavors or bitterness to balance out the zesty greens that added a slight minty taste to the beer. Weird. However, there was one beer that matched perfectly with this pie, and it was one that was already on tap at Homeslice! 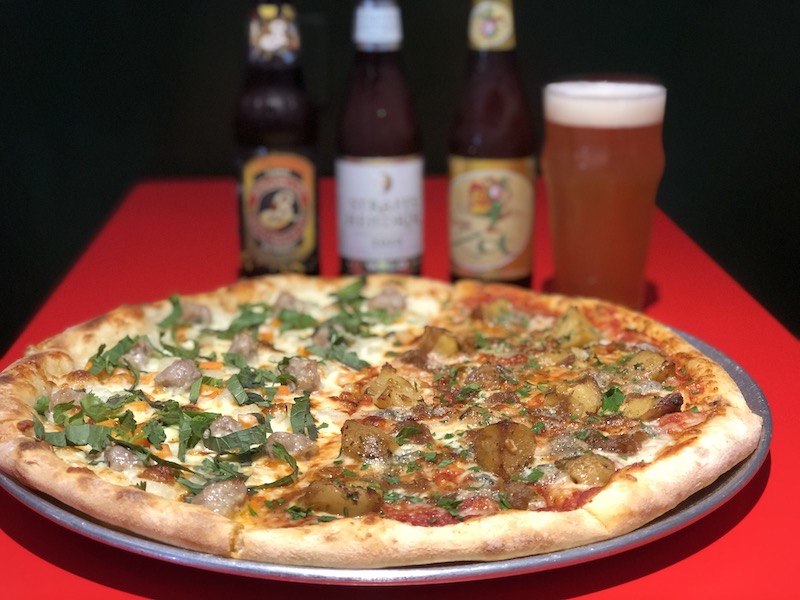 A strong American IPA is classified as having a hearty hop flavor that is offset by a robust malt body, resulting in an slightly higher ABV than the average IPA. The Union Jack IPA from Firestone Walker is the textbook definition of an American IPA. Strong yet sessionable, this beer is perfect for the more craft savvy of drinkers. A heavier IPA at 7%, this one carries a nice malty caramel backbone to compliment the tropical and citrus pop from the hops. Maintaining a solid balance between sweet and bitter, the Union Jack was a perfect pairing.

Like the Bruges Zot, the malts played nicely with the pork, but the fruity hops of the Union Jack were a better match for the Bun Cha's herbaceousness. The combination of mint, coriander, basil, and shiso exploded on the tongue, while the caramel backbone of this beer played nicely with the cheese and pork. This American IPA is on draft at Homeslice in their Found 158 location and at their new Kangding Lu location in Jing’an, so be sure to pair the Union Jack with a Bun Cha slice on your next visit! 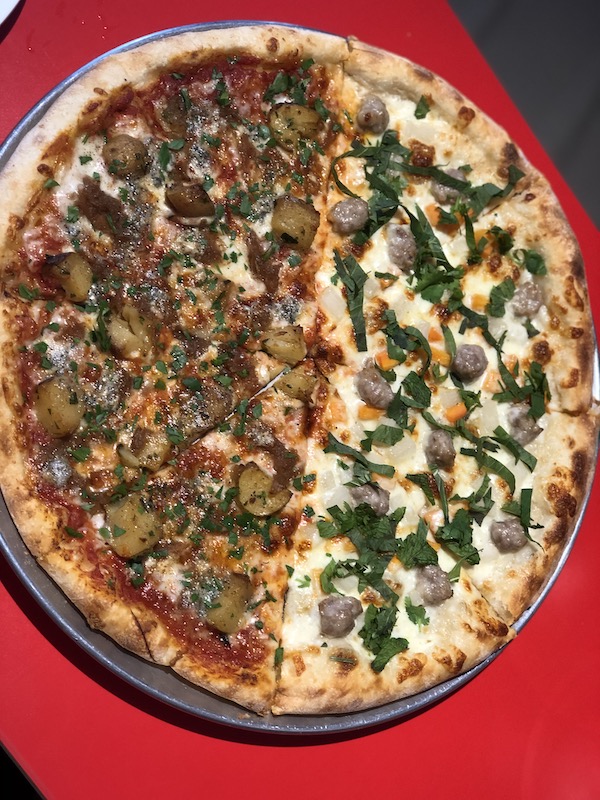 Next up on the pizza pan is the Potato and Blue Cheese, a spicy tomato sauce topped with roasted baby potatoes, blue cheese, and caramelized onions.

Nat: We were in a rush to do the new season pizzas at the same time as opening the new store and thought we would try potatoes on a pizza. The result was way better in reality than it was on paper. Spicy, rich, sweet, and funky, this pizza is loaded with complex flavors that will need a beer that is equally complex. Thus the Streffe Heindricke Wild Fermented Belgian Trippel was the first beer to sample. Funky, nutty, and herbal, this highly-carbonated brew worked exactly as planned with the pizza.

A heavy slice with a complicated brew resulted in a great pairing. The funky blue cheese went well with the carbonation, the spiciness was cut through on the herbal bitter bite, and the nutty malts danced well with the sweet caramelized onions.

The last beer, and surprisingly the lightest beer in the tasting, the Brooklyn Defender IPA is more of an easy-drinking IPA than the hop blast that is the Union Jack. 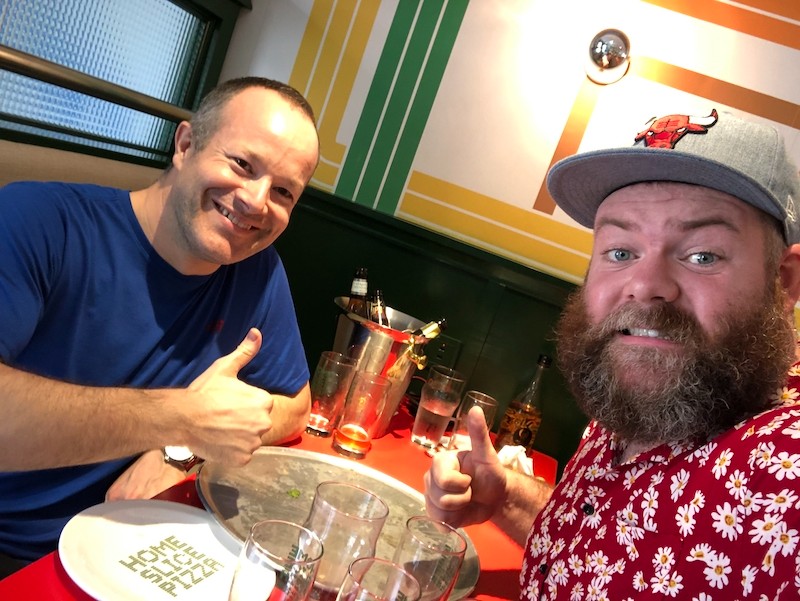 BB: The Defender is easily going to get demolished by the blue cheese in this pairing, but we will give it a shot…  Wow, that’s actually a decent pairing. The hops and carbonation are just enough to stand up to the blue cheese, and the lighter malts really give it a nice taste with the spicy tomato sauce and caramelized onions.This is what food pairing is all about folks, finding the right beers to work well with different foods and building upon the flavors that already exist. 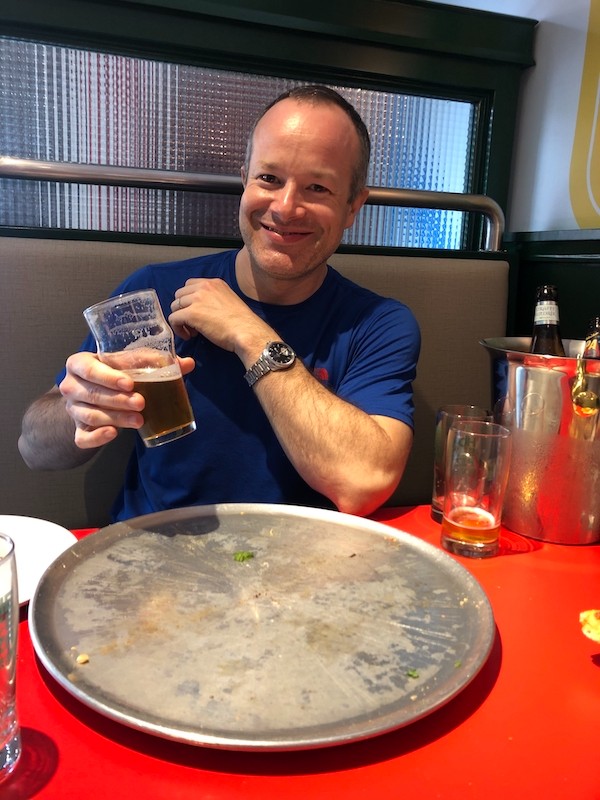 Thanks to Nat from Homeslice for hosting the Bearded Bear for pizza and beers!  Be sure to check out their newest location on Kangding Lu, near North Shanxi Lu!