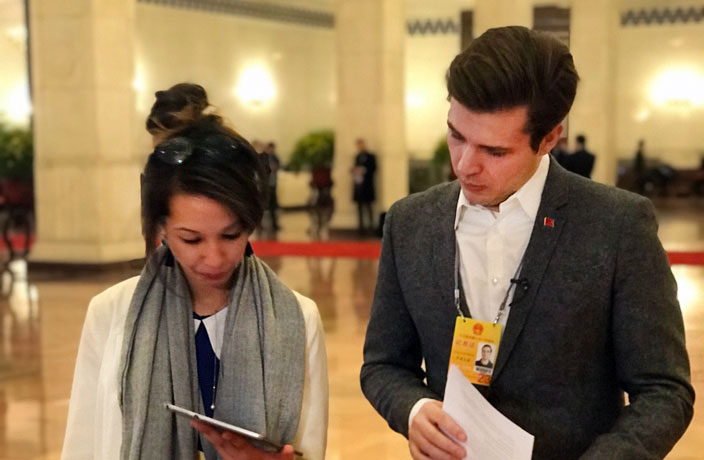 While there is no shortage of foreign editors sprinkled throughout the ranks of Chinese publications and media companies, thoughtful and articulate political columnists are a far rarer breed.

Since moving from the US to Beijing two and a half years ago, Ian Goodrum has built an avid following, thanks largely to his insightful columns in China Daily and People’s World covering geopolitical issues and current events.

The well-spoken 30-year-old originally hails from Brazoria, Texas, a county located roughly an hour south of Houston on the Gulf Coast. From a young age, Goodrum was aware of the economic disparities between different communities in his county. In his college years, he majored in English and took to devouring the texts of the great communist thinkers of the 19th and 20th centuries – including revolutionary and founding father of the People’s Republic of China Mao Zedong.

“China was a place that I had always been interested in,” says Goodrum. “In college, I was reading Marx, Lenin, Engels and Mao, and Mao was one of the writers that really struck me the most in terms of what I had experienced and what I knew about the way the world works.”

Upon graduating from college, Goodrum jumped into the world of American media, working as a column and feature writer, as well as an occasional reporter. But in a turn of events that is all too familiar to people working in media, he was laid off just before the 2016 election.

“It’s hard enough finding a job in journalism anyway, but it’s even harder when you are looking at the same time as 300-plus other people with varying levels of experience and backgrounds,” Goodrum tells us. “I was getting some responses, but nothing was super forthcoming, so the thought came to me that I should start looking outside of the country.”

His job search eventually landed him with English-language newspaper and digital media company China Daily in Beijing. While the job offer from China Daily was the chief motivator for the overseas move, Goodrum says that he was interested in coming to China to learn more about the media landscape here versus what he had experienced in the US. He did have some reservations, though.

“When you decide to not abide by a lot of these [anti-China] narratives, you find yourself on the back foot a lot of the time and you are responding and defending rather than being proactive and creating”

As a Leftist, Goodrum admits he was skeptical of modern China’s revolutionary credentials, although he says that these misgivings quickly dissipated after researching into modern China’s policies and governance. They were further dispelled after arriving in the country.

“Getting to go to some of these villages where the poverty alleviation campaigns are in full swing, where there are new houses being built, where people are getting public services – many of them for the first time, these actions are being taken by the government. This solidified my turnaround and solidified my support [for China’s government],” says Goodrum.

The Texan’s day-to-day job sees him working as an editor, although he regularly releases columns tackling diverse topics for an international audience, from the US-China trade war and last year’s NBA scandal to Karl Marx’s legacy and the Two Sessions.

While Goodrum tells That’s that he enjoys total autonomy in choosing his topics, he does note that much of his time has been spent responding to anti-China rhetoric and misinformation in Western media and political circles. This has become a full-time job in recent years, and even more so over the past several months, with American officials regularly referring to COVID-19 as the ‘China Virus’ and US Secretary of State Mike Pompeo’s baseless assertion that the disease originated in a Chinese lab.

“I got here right before the anti-China machine really got kicked into high gear, so most of my work has been responding to what is being said about China in the West. When you decide to not abide by a lot of these [anti-China] narratives, you find yourself on the back foot a lot of the time and you are responding and defending rather than being proactive and creating,” says Goodrum.

His dedication to providing an inside look at Chinese politics for domestic and international audiences has earned him a considerable following. Since arriving in China, his Twitter following has grown from roughly 1,000 followers to more than 25,000. He’s also been featured on prominent podcasts and given lectures on his experiences in China and his thoughts on China’s quickly evolving role on the global stage.

With no plans to leave China in the near future, expect big things from Mr. Goodrum in the years to come.