One of the reasons I got into this wild world of bartending is the stories my dad told of his time behind the stick in the ’60s working at a place called the Buena Vista Cafe in San Francisco, the birthplace of Irish coffee in America. Located near Ghirardelli Square, these guys pump out more caffeinated goodness in a day then Gucci Mane working a Coca Cola trap house.

What’s the deal with Irish coffee? Perhaps it’s best to reference Joseph Sheridan – who popularized the drink in 1940s Ireland: “Cream – Rich as an Irish Brogue, Coffee – Strong as a Friendly Hand, Sugar - Sweet as the Tongue of a Rogue, Whiskey - Smooth as the Wit of the Land.”

I swear I didn’t make that up.

Let’s start with the origins of Irish Coffee. In 1943, a chef named Joe Sheridan invented it at the restaurant in Foynes Airport – a major wartime airbase. Important Hollywood folks and other VIP types flew through there on the regular. During a particularly bad snowstorm, a bunch of these bigwigs were on a plane that had to turn back. Feeling bad for these stranded guests, Sheridan whipped up this now-famous creation.

As the story goes, a customer asked him if it was a Brazilian coffee. “No,” quipped Sheridan, “this is an Irish coffee.” Thus a legend was born. It instantly became the hit drink of the airport. In 1952, travel writer Stanton Delaplane introduced it to his party buddy Jack Koeppler who happened to own the aforementioned Buena Vista.

Now, every bartender has had a guest ask them to recreate some drink they tried somewhere else, but our boy Koeppler not only tried his best to recreate it, he also went to Ireland to learn the recipe first hand from Joe Sheridan. I would love to have been a Fernet on the back bar during that conversation.

The trick to an amazing Irish coffee is all in the cream. We’re talking heavy whipping cream, not that junk that comes out of a can. I lightly whip it then store overnight – like they do at the Buena Vista. Next, pour hot water into a glass to warm it. After pouring out the hot water, add a cube of brown sugar, 45 milliliters of Irish whiskey and 120 milliliters of hot coffee. Stir to melt the sugar then top with cream. The slightly aerated double cream should float, making all right in this world.

The wrong way to make an Irish Coffee is to add Baileys, a green shamrock, sugar rims, Kahlua, latte foam or any other of the myriad abominations that people like to add to this simple wonder.

Now, full pause – Irish coffee in all its glory has made quite the renaissance lately in Shanghai thanks to FamilyMart. I had heard myths about this strange booze concoction, but I finally got to try it the other day in the name of research. For RMB16, they serve a decent version of Irish coffee which is basically their latte with what tastes like hazelnut syrup plus two pumps of Jameson.

Now, when I research something, I re-e-e-e-e-e-search something. Especially if said something is Jameson and coffee and available at any FamilyMart. After a few research cups, I slurred out eloquently to the wonderful bartender at FamilyMart to pump some extra Jameson in. At a whopping RMB2 per extra pump, we ended up getting funky in that Family Mart. I woke up with a bill of RMB120, a splitting headache and the WeChat of the FamilyMart ayi. I call that money well spent. 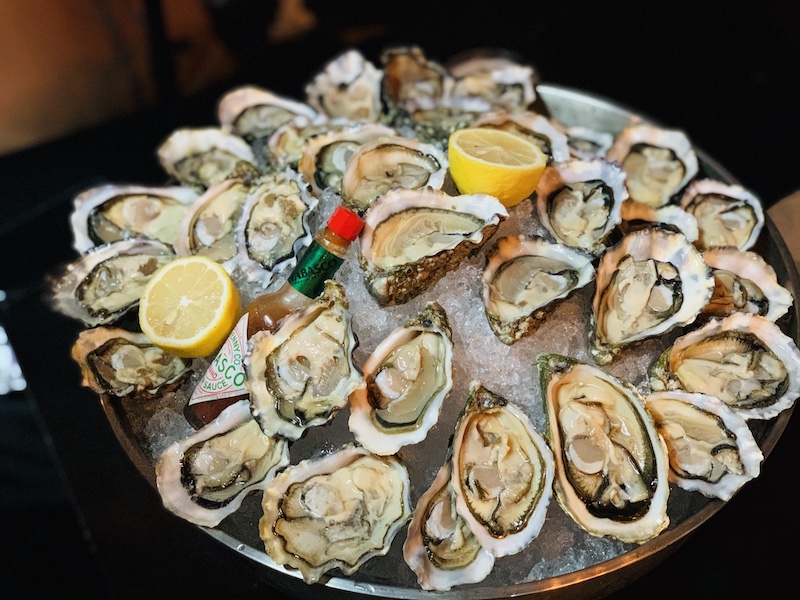 Free flow oyster and six whiskeys to choose from! What more could you want?!