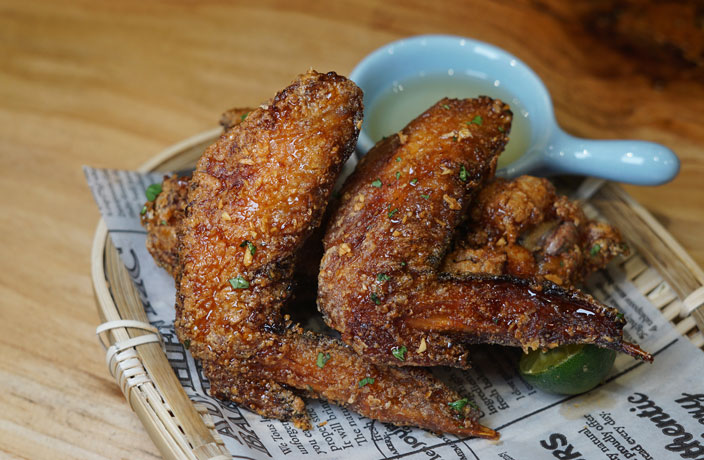 Here are all the restaurant and bar openings we featured in our June 2019 magazine issue. You will find Bun Cha Cha in the basement of Lippo Plaza, just south of People’s Park, among the swath of neon-signed shopping malls on Huaihai Lu. Dreamt up by chef Danyi Gao (of Shake fame) after a visit to Vietnam back in 2017, she was compelled to reinterpret the healthy Vietnamese staple, bun cha, for Shanghai.

The restaurant’s focus on perfecting a single dish with a harmonious balance of nuanced flavors, unique textures and herbaceous aromas, and served with a cold dipping sauce, as opposed to the ubiquitous hot bowls of pho Shanghai-dwellers associate with Vietnamese cuisine, is unique enough to give this new concept restaurant life. Back in the glory days of Yongkang Lu, it was a just short drunken stumble over to Bad Boy Bangers, where you could stuff your face with British food, mostly house-made sausages. Since closing up shop in late 2017, there has been a sausage-shaped hole in the hearts of English-food aficionados the city over. That is set to change with the opening of Baps, a collaboration between former Shanghai resident Deji Odunlami and his partner Michael Fan, down in south Xuhui’s Sunny Walk Plaza.

We hate to disappoint, but if you were hoping for a full English breakfast or sausage rolls, you are out of luck. The brief bill of fare here includes four burgers, three hot dogs and a few appetizers. Still, they pack a lot of variety into such a tiny menu. For example, with each burger option, the Cumberland pork patty can be upgraded to a beef Patty for RMB10. It's been about six months since the unceremonious culling of venues located at 20 Donghu Lu. Among the villa’s Japanese residents, only Ochobo has found new life on Taiyuan Lu. In addition to bringing their kaiseki set menus to this sleepy corner of the former French Concession, the team added a downstairs spot devoted to the art of grilled meat, or yakiniku, featuring high-end dry-aged beef of the Australian and American variety. English import Zizzi has nearly 150 restaurants back on home soil and prides itself on offering Italian fare with local touches. Staples include a signature line of rustica pizzas, spiedini and Mediterranean-style skewers, while the rest of the impeccably designed and beautifully shot menu is fleshed out with family-style appetizers, pastas and cuts of salmon, steak, short rib and veal. We first met Vincenzo Pagliara at The Sukhothai Shanghai, and found ourselves extolling the virtues of his creative, nature-driven menu at The Zuk Bar. When we learned he was leaving Shanghai for his native Italy, we were bummed… until we found out he was going to split his time across continents and go into business with local industry all-star, Daniel An of Antique and Atelier fame.

We’ve been fans of An for even longer than Pagliara, watching his journey from the over-the-top creations of his first bar, Taste Buds Cocktail Palace, to the more restrained classicism of Atelier’s program. Always ones to experiment, this new partnership allows the pair to go nuts in their lab, where they keep the fancy equipment like a rotary evaporator behind a glass wall.

At Arch by Taste Buds, the results are featured on two different menus matching the venue’s two bars. There is a smaller aperitivo bar at the front, with a longer cocktail bar to the back. Both menus feature Italian and Chinese flavors, with the back bar’s menu laid out symbolically in an arch.