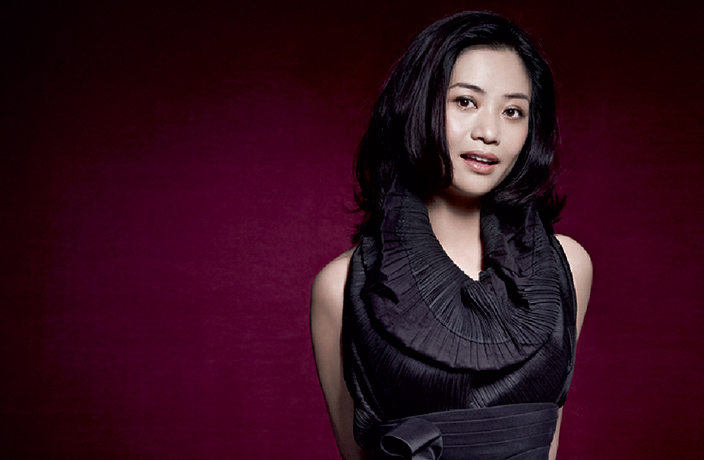 Hailed as the Chinese Coco Chanel, although more akin to Alexander McQueen and John Galliano, Guo Pei is China’s couturiere extraordinaire - the reason bespoke fashion exists in the country. We chat with the designer about her work, ascending career and why she loves ‘harsh women.’

Looking at Guo Pei, one wouldn’t guess that this petite woman with a bob was the fashion powerhouse she is. Diminutive, pretty and still looking very much like a college student, the 50-year-old has a gentleness unmarred by circumstance, and a poised attitude that’s a study in etiquette. Unexpected traits from someone so high up in the industry.

High up she certainly is though. Since launching her business two decades ago – when luxury brands were a foreign concept in China – the designer has become a trailblazer in the country’s fashion realm, building her atelier, Rose Studio, into an internationally admired name whose gravity defying creations are so intricately crafted that they caught the attention of Lady Gaga. If one can talk of Chinese haute couture today, it’s because of her.

“I’ve just been sticking to my own ideas,” she says almost dismissively, “and tried always to be persistent and passionate about what I do. It’s all about following a routine – that’s the most challenging and interesting part of the job.”

For her fashion house, that has meant years of honing a level of craftsmanship so meticulous it now equals, and in some cases surpasses, the technical feats of Paris couture. 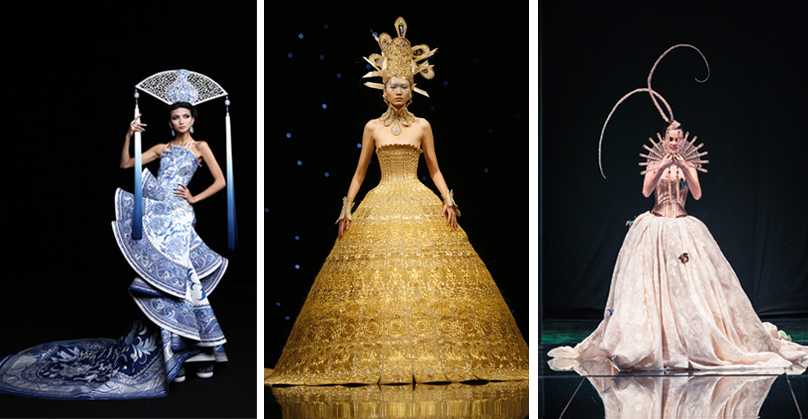 Fantastical creations from the Chinese designer.

Reinterpreting both Eastern and Western motifs, her couture collections are displays of sartorial grandeur; risk-taking designs that draw easy comparisons to the aesthetic of Alexander McQueen.

Like the late British designer, her works are created to be worn. But could also easily sit in a museum: lavishly embellished, they are made of visionary garments, from weighty, exaggerated dresses and skirts moulded into bell shapes to majestic headpieces that are total fantasy or, as fashion mogul Hong Huang once described them “Chinese embroidery on steroids.”

One dress alone, made entirely of golden panels, took 50,000 hours to finish.

“For that particular gown we adjusted the shape millions of times, and worked on the embroidery over and over again,” Guo recalls. “It’s a personal milestone, and, in a way, I think it really marked the emergence of haute couture here.”

Guo debuted it in 2005, after a visit to the Musée de l’Armée in Paris where she found herself inspired by Napoleon Bonaparte’s regal military uniforms. One hundred artisans worked on it.

Today, her studio counts a team of 450 people, 300 of whom are exclusively specialized in traditional hand embroidery. Yearly, they generate 3,000 to 4,000 pieces for some 500 regular clients, including public figures from China’s and the world’s highest political, media and social circles.

"I like what I call my ‘harsh clients’: women who know themselves well and have high standards. They are a propelling force for us designers."

Dresses go from anything between RMB40,000 to RMB5 million. Although Guo says margins are low, it’s an impressive volume for a couture operation, one no doubt tied to relatively cheap labor.

The road to get here, Guo says, has been a long one.

The daughter of an army platoon leader who later held a high-ranking position in the state housing authority, Guo was born in Beijing in 1967, at the start of the Cultural Revolution. Her family remained in the capital, and in 1982 she enrolled in fashion studies at Beijing Second Light Industry School. China lacked any sort of worldly information about fashion at the time, but that did not stop the designer from falling in love with the art of dressmaking.

Upon graduating in 1986, she first took a job designing children’s clothing and, soon after, went on to work for woman’s fashion company Tianma, one of the first generation of privately owned businesses in a China where the drab, functional Mao uniforms that had been obligatory wear were starting to disappear. She stayed on 10 years, taking a profit share in Tianma that allowed her to save enough money to start her own bespoke atelier, Rose Studio, in 1997.

Located in Beijing’s 798 Art District, an industrial area of former power plants and factories, the studio – a non-descript three-story office building that also acts as exhibition hall for some of her dresses – is a far cry from anything you’d imagine when thinking of couture. Yet it’s here that Guo took the first steps towards the exclusive art of custom-fitted clothing.

Eight years after starting her brand, she made her foray into haute couture with a first collection of 38 dresses (including the gold ball gown) showcased in front of China’s key fashion media in Beijing. Her star soared. 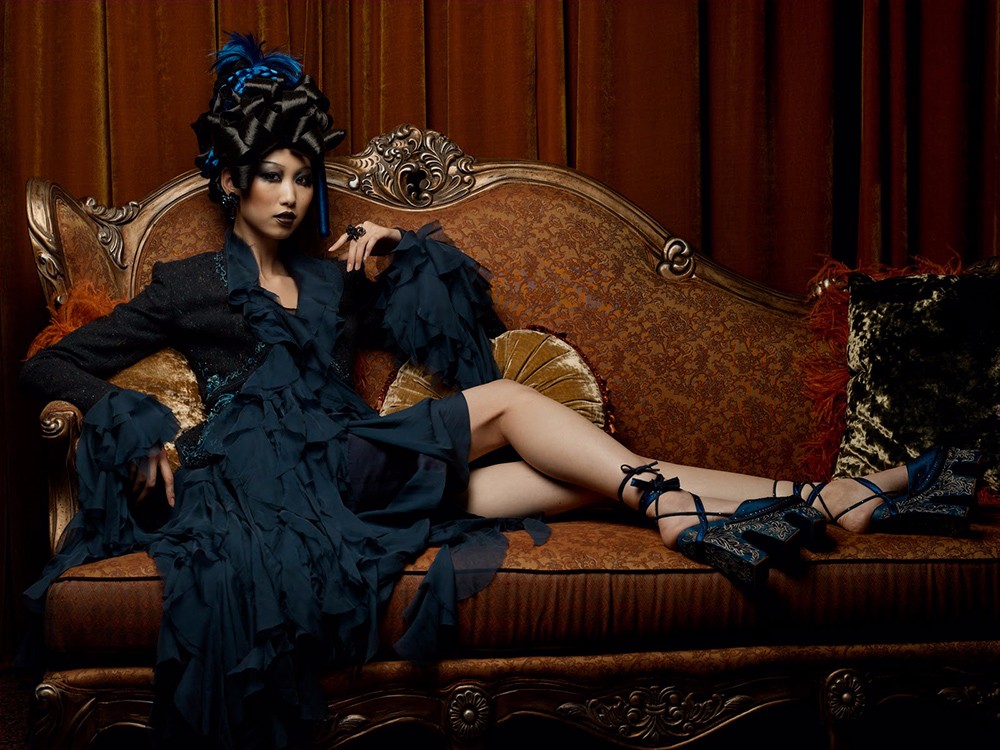 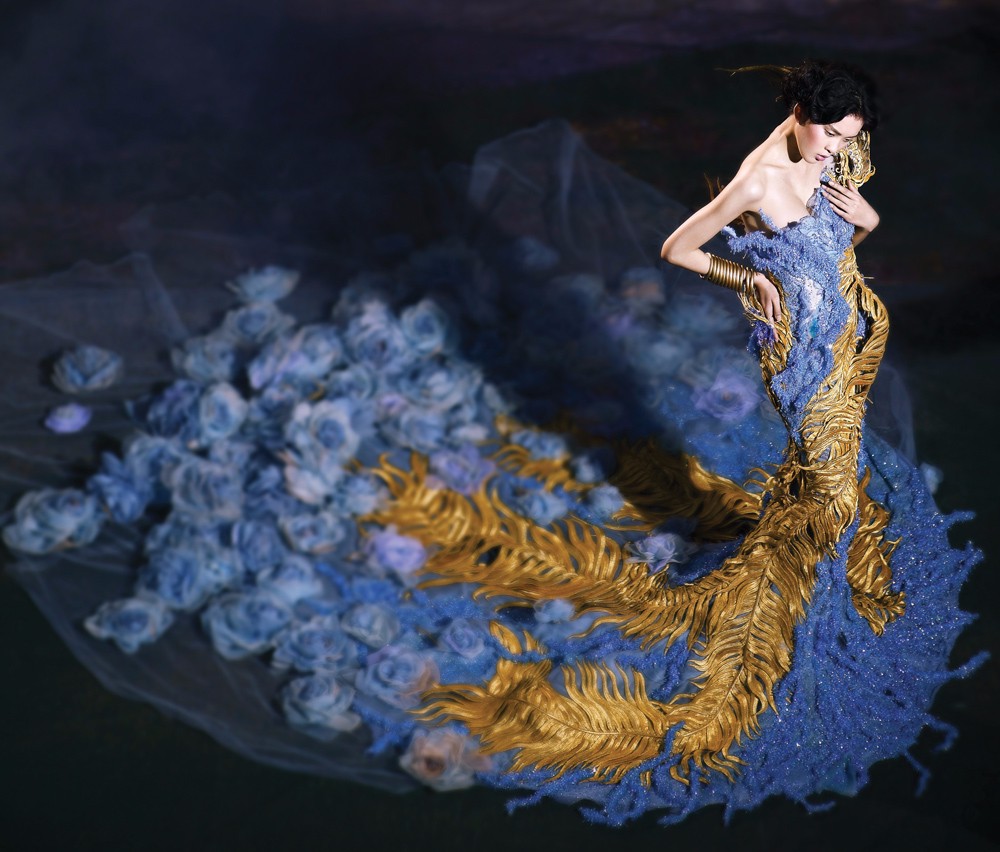 Since launching her business two decades ago – when luxury brands were a foreign concept in China – the designer has become a trailblazer in the country’s fashion realm.

Guo has been holding fashion shows every two or three years since – surreal, opulent spectacles that resemble art performances rather than simple runway walks, with references to Chinese fairytales and the yearnings of a woman, gothic impressions and long-lost dreams.

In 2008, three of her designs inspired by Chinese elements such as jade and pagodas were selected to be worn by the medal presenters, tray bearers and athlete escorts at the Beijing Olympics victory ceremonies. Chinese singer Song Zuying also donned one her creations during the closing night, a gown adorned in 200,000 Swarovski diamonds sewn on by hand.

In an almost submissive manner, however, Guo does not hold the event as the highlight of her career. “The gowns I produce for events like the Olympics, or for some of my clients, don’t really represent me as a designer,” she says.

“I like to think of them as mere commodities, rather than genuine reflections of my own artistic inclination. In a way, I am just a seamstress, a service person who does what the customer wants.” 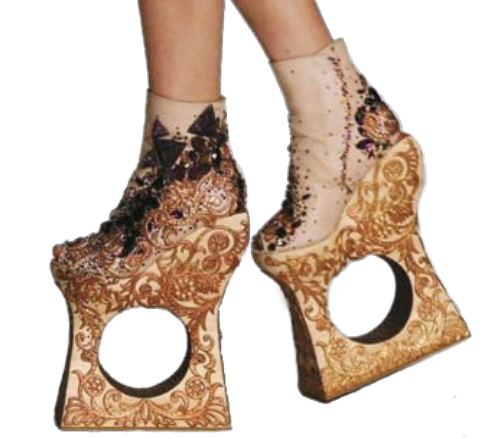 If such dutiful attitude has proved popular among her wealthy clientele, it has also acted as a double-edged sword. In 2009, after a number of hostesses for the televised Spring Festival Gala – a star-studded show produced by China Central Television (CCTV), and shown on the eve of Chinese New Year with a yearly viewership of over 700 million spectators – wore her designs, a wave of Internet postings accused Guo of copying famous fashion houses in Paris.

“For a long time, particularly at the beginning, I’ve had to keep my head down,” she considers. “It’s hard when you want your ideas to thrive, yet have to satisfy your customers’ needs,” she explains.

“Particularly when they’re trying to follow the trends of the market rather than their own ideas. That’s why I like what I call my ‘harsh clients,’” she adds. “Women who know themselves well and have high standards. Women who really understand beauty. I think those kind of customers are a propelling force for us designers.”

Perhaps no one better than legendary model Carmen Dell’Orefice fits such description. The eternally elegant fashion icon, whose career began in 1945, is one of Guo’s biggest fans. The designer flew her in from New York in 2010 for her third collection – held in the National Stadium at the Olympic Village before an audience of 2,600 people – and dressed her in a bejeweled sheath and an embroidered, furtrimmed cape fit for a Ming empress (and heavy enough to require an escort of four men…) 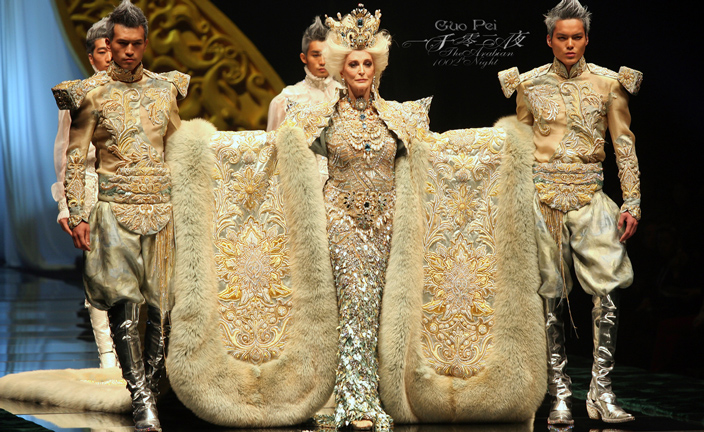 Talking about the experience, Dell’Orefice compared Guo to Charles James, America’s first couturier, saying she was “awestruck by the pure beauty. She brings some part of the Chinese history forward and jumps over Mao Zedong.”

Guo’s ambitions have only continued rising over the last few years. While she keeps delivering dazzling haute couture collections – the latter of which was presented to an audience of high-end New Yorkers at the first China Fashion Night Gala during last year’s NewYork Fashion Week – the designer has also made plans to open an atelier in Paris, and branched into what she calls “demi-couture.”

In 2012, she launched a bridal line called Chinese Bride, opening a wedding-themed flagship store in Shanghai’s Bund 22, one of the city’s premier luxury developments. Besides being more accessible, dresses don’t have a lead-time of three months, and can be made in two weeks.

It’s a smart move to target and lure the fast-growing ranks of upper-middle-class Chinese brides. The gowns, on their parts, are as stunning as her couture, and very much in line with the designer’s fashion identity.

“I’m trying to move beyond the recognized criteria of haute couture,” she says. “In that sense, I am still refining my ideas.

“I design stories. My design and clothes are my words,” she adds. Just sit tight and wait for the next chapter from this fashion storyteller. 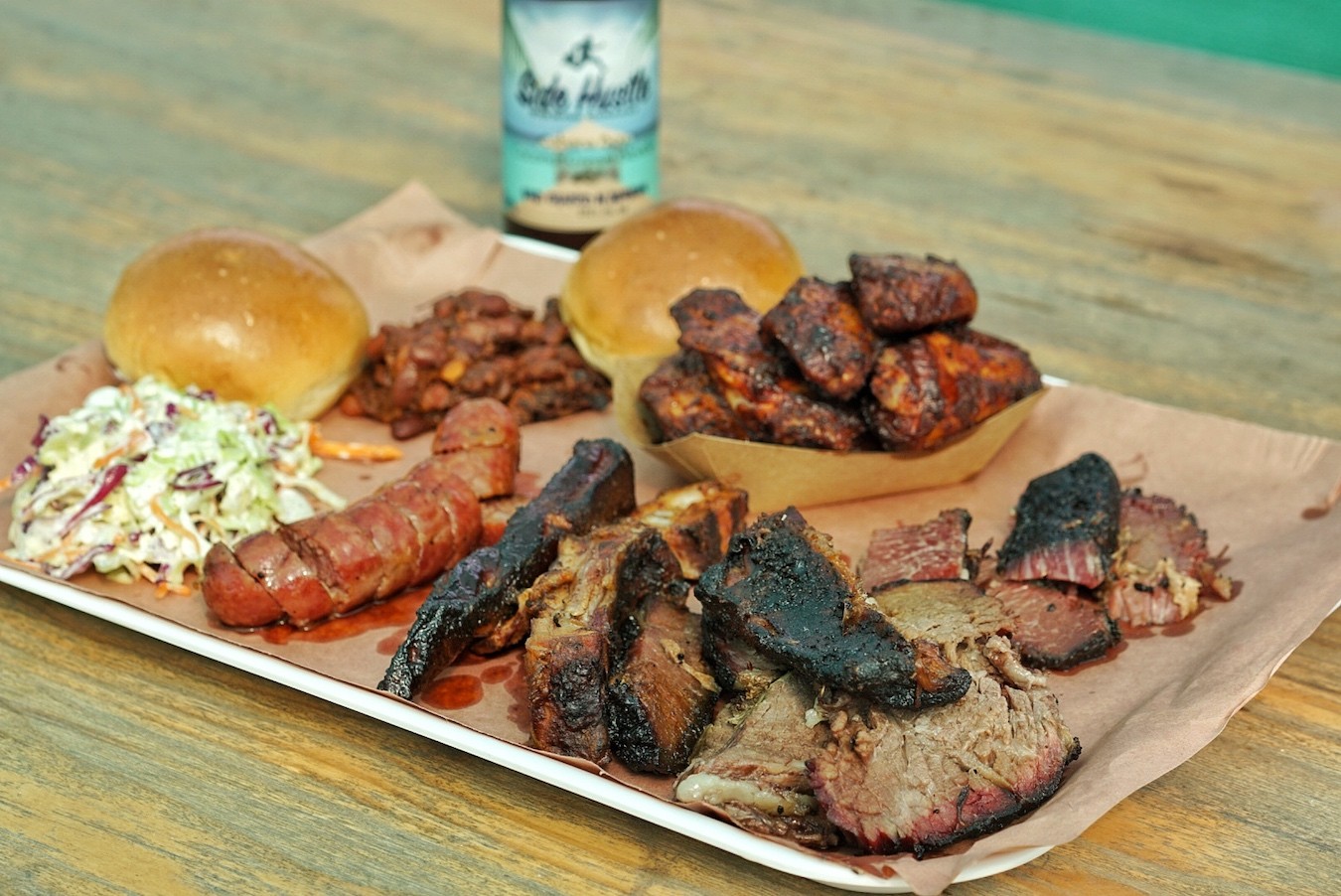