Zainab Johnson is a comedian from New York who is noted for her witty stand-up, her web series on relationships and reaching the semi-finals of Last Comic Standing. She was also a featured performer on HBO's All Def Comedy last fall. With caught up with Johnson before she returns to Shanghai, where she made her China debut last year, to chat about her origins, women in comedy and her upcoming sitcom with fellow comedian Wanda Sykes.

How did you go from getting a math degree to performing comedy, and do you think having that background helps in any way as a comedian?
I studied math in school because I was good at it and it seemed practical. After graduating from college, my dad passed away and I thought it best to pursue my dream of being an entertainer (which was definitely deemed impractical) before it was too late; the whole “time is short no regrets thing.”

I don’t think math helps with my comedy really; I mean it sounds impressive onstage when I say it, like “oh, she had other options” but any math skill I have probably only helps me calculate how long the crowd is silent on a night that’s not going so well for me, haha. And at that point you really don’t want the skill.

Much of your comedy has dealt with the idiosyncrasies of relationships, like your 'Just Friends' podcast and Cocktail Confessions. Why does this topic hold so much interest for you?
I love the exploration of relationships (dating or platonic) because when people get together and reveal themselves we reveal the human condition and that to me is fascinating and most times funny.

What do you like about acting for TV and movies versus doing live stand-up?
The biggest difference between television and movies  and stand-up is when acting you get to do it again and at the very end there’s the magic of editing, the ability to take a moment a to create something else from it.

Live stand-up or any sort live performance really, you only get that one moment with that specific audience, in that club, at that time and when it’s over, its over. Now you can do the same jokes again at the same club in some of the same people and it wont be what it was the show before that. I know people record on their cell phones and so they feel like they’re capturing the moment but again, watching it taped is much different than watching something live. 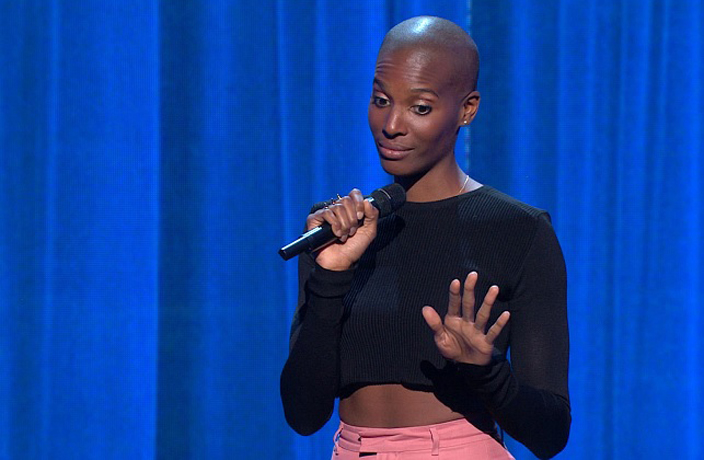 Some of your comedy also deals with social issues, especially the recent Woke AF segment on apartheid. Do you think comedy can be a way to teach people/encourage them to be more open-minded?
Comedy should encourage people to have an open mind. There are people in this world, most people actually, that will never have the experiences in this life that I have, good and bad; it almost seems pointless to not use this medium to share the experiences of different types of people as a tool to bring people together or at least gain some understanding.

What was it like performing on the All Def Comedy special last fall?
Performing on the All Def Comedy special on HBO was gratifying. To be featured on such a large platform and be included in its legacy was an honor and I’m so thankful for the opportunity. When you tape stand-up sets like that you’re no sure how they’re going to edit them or even if you’ll make the final cut. I was the only female on that special so I was proud, and hopefully did well for all my women in comedy.

You’ve spoken about stereotypes against women in comedy, and have sometimes been the only women in stand-up line-ups, like in the All Def Comedy special. Do you think much progress has been made in the last few years toward this issue?
I think a lot of progress is being made and the fact that the conversation is even being had is a step in the right direction. W,omen shouldn’t have to prove themselves or fight to be recognized more than men in any field, but the reality is that’s not the case. I think it’s important for women in comedy and women from all different backgrounds to be constantly supporting and teaching one another because if we get onboard with one another, everyone else (but really men lol) will be more inclined to support us.

We heard that you are working on a show with Wanda Sykes about a Muslim model on ABC. Congratulations! Can you tell us anything about it and when we can expect it out?
The project is still in a development phase but both myself and Wanda are looking to create a unique, funny and authentic experience that the entire family could watch.