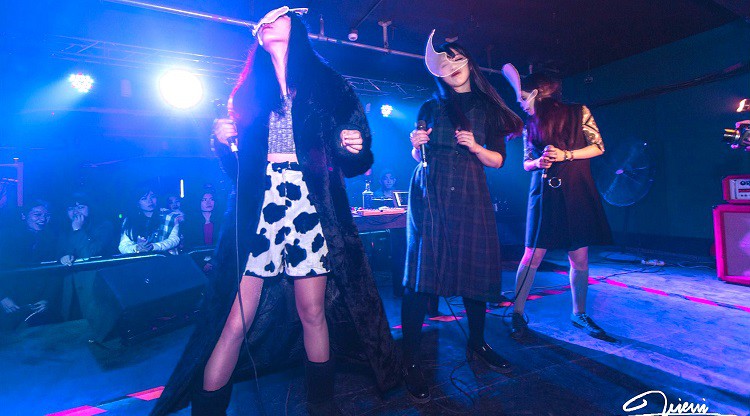 The indescribable Kunming act makes their Shanghai debut rocking the Echo Park festival stage. A rising force in the country's indie scene, the trio mixes electro, K-pop dance moves and a spunky attitude drawing comparisons to Grimes and M.I.A. We chat with Shi Shi about how these girls roll.

Congratulations on coming to Shanghai to play Echo Park. How have your past shows in Shanghai gone and how do you like playing festivals?
This is our first show in Shanghai and we&rsquo;re super excited to be a part of Echo Park Music Festival. It's our first time to be on a big stage!

The first time I heard of you was from Queen Sea Big Shark, who mentioned you as one of their favorite new Chinese bands. Could you talk about how the three of you first came together?
We've been running around together since we were little kids and started our first band at 15 years old. It was all girls, and at the time we did a lot of cover songs of Bikini Kill, !Action Pact!, Atari Teenage Riot, Yeah Yeah Yeahs, etc&hellip; We&rsquo;ve experienced a lot of unexpected changes throughout the past 10 years and Acid Mimi sums up how we feel about music, and we still hope that we can retain a youthful mind: revolution forever!

Acid Mimi sums up how we feel about music, and we still hope that we can retain a youthful mind: revolution forever!

How did you come up with the band name?
When we chose our name it was just sort of making fun of ourselves &ndash; we didn&rsquo;t think too much about it.
Musically, it&rsquo;s hard to describe your sound. There&rsquo;s some electro there, some pop, some disco, some punk attitude. Who are some of your influences, both international and Chinese?
We live with an easy going attitude, so our music embodies that. Our creative process isn&rsquo;t that strict, sometimes we&rsquo;ll just use practicing as an excuse to pass the time and not really do anything. But sometimes there will be a moment, helped along with a few cups of plum wine, at 2 or 3 in the morning, and we&rsquo;ll come up with a new demo. We can&rsquo;t really say about our influences, but still remember the feeling we got when we first listened to Bikini Kill, Atari Teenage Riot, Nirvana, Nina Hagen, Rammstein, The Prodigy, Joan Jett, Hole, Rage Against the Machine, Scissor Sisters, etc. It was like our spirit was baptized again and again, and listening to it refreshes our musical views.

Live, you have a great reputation and are known to rock masks and some dance/idol moves. How would you describe your live show and what&rsquo;s the deal behind the masks?
At first we wore masks simply because we didn&rsquo;t want people to recognize us and didn't know that it was us. Of course it was also a little bit because it looked good too. (smiles) Now, it seems like each time we perform is different, and each time we&rsquo;ll try to wear different masks. Also, a person doesn't have the same attitude forever! To sum it up, we want to express something different each time we play, because we have a lot to express.

What is your state of mind before you go on stage and while you&rsquo;re performing?
We will find a more methodical way to prepare to get on stage, but until then, we normally open a bottle of whisky, bring a pack of smokes, just three girls holding hands and off we go! We&rsquo;ll randomly pick a direction and start our show from there &ndash; from top to bottom we&rsquo;ll sing, and when we think it's enough, we&rsquo;ll bring it on back. I remember one show, starting from backstage and ending with our last song we drank a whole bottle of Jack Daniels.

You recently played the newly opened MAO Livehouse in Kunming. How is the venue?
MAO is a good place. When we played, it had a really nice vibe, we had a great time there. And, while we&rsquo;re at it, we&rsquo;d like to recommend some friends that we all play, live, and get drunk together.

You&rsquo;ve received quiet a bit of attention. Are there any plans for an album and how has your sound/performances changed over the past few months?
We have plans for an album. From the time we started this band up until now, we&rsquo;ve become more self-aware. Actually, our more danceable music isn&rsquo;t just some simple dance melodies. We want to use music to express deep emotions and we&rsquo;ll never stop learning.

What&rsquo;s the funnest part about being in a band and where do you see South Acid Mimi Dance Team a year from now?
It&rsquo;s like being passionately in love, the more you understand each other, the deeper the love &ndash; there&rsquo;s no time to be in a daze. And, at that happy time, we can create something together, think together, cry and laugh together, and walk together. We hope that in a year our lives have a clearer direction in life, and in music we hope that we can better express ourselves. But, we don&rsquo;t have any definite strategy &ndash; just hope that we can make songs that really move us.

Is there anything you would like to add?
Hope you have a good time, see you guys at Echo Park!