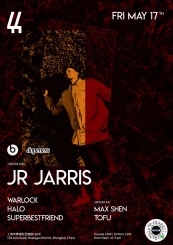 JR Jarris is a rising producer, DJ, and event curator based in San Diego, CA.Throughout his career, JR has collaborated with the likes of Masego, SOSUPERSAM, and Mike Gao, as well as with AbJo and PRVDNT for a track that appeared on Soulection’s Unite compilation in 2017. His skills as an artist have scored him milestone performances at Low End Theory and CRSSD Fest, throughout the United States, and even in Tokyo.