If you’re staying in Guangzhou for Spring Festival (possibly out of fear of the new coronavirus that’s spreading across the country), or visiting Guangzhou during this special holiday, here are our picks for the best Chinese New Year feasts to celebrate the start of the Year of the Rat. Dine at Four Seasons Hotel Guangzhou’s banquet hall on this special occasion and be treated to an array of fun activities and amazing edibles. The luxury hotel is preparing a Cantonese-themed dinner featuring a suckling pig platter, roasted chicken, lobster braised with cheese and various other festive eats. The dinner will be accompanied by a traditional lion dance, Chinese calligraphy, paper cutting and photo shoots in Peking Opera costumes, among other activities. There will also be a lucky draw, with prizes including hotel stays at different Four Seasons establishments across China. Dine at Guangzhou’s sole two Michelin-starred restaurant this CNY, where three different dinner sets – salmon, brown-marbled grouper as well as abalone and sea cucumber – will be prepared for you to choose from. Additionally, you can pick up a Chinese festive snack gift box at the The Mandarin Cake Shop. Dine with the family at the LN Garden Hotel and choose from two holiday feasts, both featuring Guangdong’s most iconic eats during Spring Festival. The boutique hotel is offering two Spring Festival set menus for parties of four to six guests (RMB2,988) or eight to 10 people (RMB5,388). Ming Court at Langham Place, Guangzhou will cater to your every whim with a sumptuous dinner this holiday. Highlights from the menu include a suckling pig platter, braised pork tongue and pork trotter with white radish, salmon sashimi with assorted condiments, shredded fish maw and bird’s nest in supreme soup, among others. For folks spending the Spring Festival in Nansha, head to Sheraton Guangzhou Nansha Hotel for a Chinese New Year’s Eve feast at Yue Chinese Restaurant, classic poon choi and holiday hampers with all sorts of goodies. Image via The Westin Pazhou

Enjoy a sumptuous dinner with Michelin-honored dishes coupled with a panoramic river view at The Westin Pazhou. Click here to see what Guangzhou restaurants will be open (and closed) during the CNY holiday. With experience working in China, Malaysian native Chef Mak has come to learn the local tastes. From the tasty edibles to the live music and market-style layout, Sense is a real winner and is among our top spots to enjoy a top-quality meal. 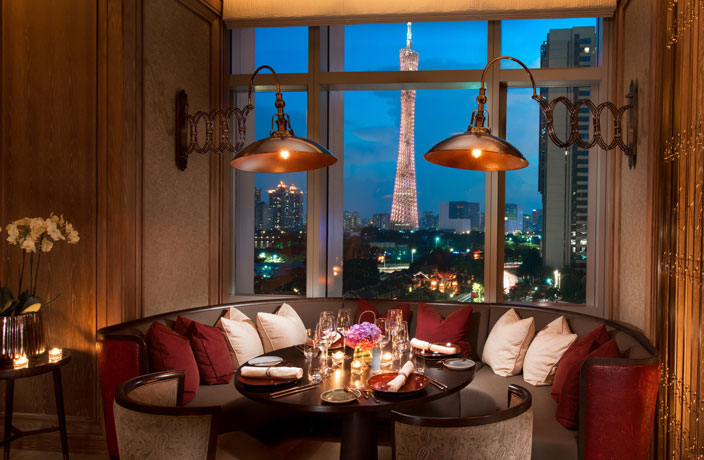 ​Every now and then we like to treat ourselves with delicious food deemed worthy by the gastronomic gods.