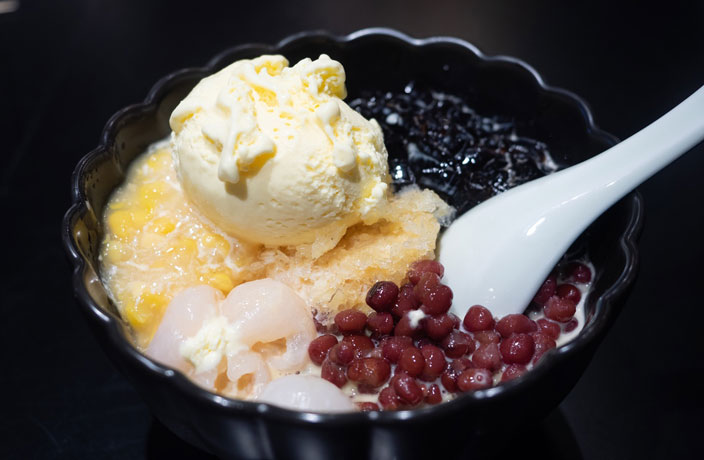 Here are all the restaurants we featured in our August 2019 issue: 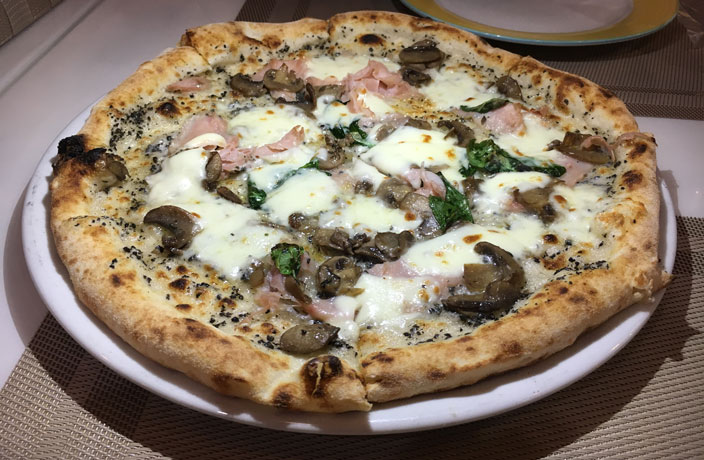 DaFrancesco serves both oil and tomato-based pizzas as well as a list of pastas and steaks. We decided on the truffle and ham oil-based pizza (RMB88-118), and also ordered salmon with arugula (RMB108) and bruschetta (RMB32).

To our surprise, the pizza came out faster than the other two dishes (a first from our experience). We tucked into the thin and crispy pie, which was topped with truffle sauce, ham and mushrooms. The mozzarella was oozing with flavor and a touch of truffle made it a pizza worth ordering again.

By the time the bruschetta arrived, we’d put a decent dent in the pie, and were happy to slow the pace. But unlike DaFrancesco’s pizza, their bruschetta left us unimpressed, lacking any substantive flavor. The salmon, on the other hand, was a delight, with an abundance of fresh and tender chunks of fish to conclude a satisfying meal. 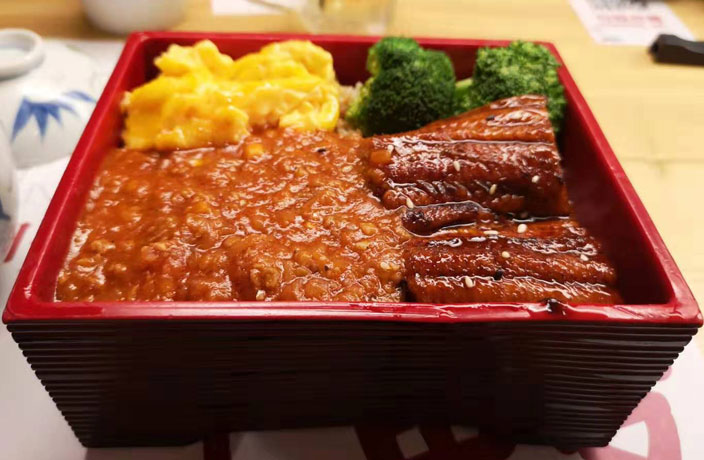 Japanese dining in Guangzhou ranges from pricy and pretentious to budget all-you-can-eat feasts that leave you filled with shame and regret. Kabayaki Grilled Eel on Rice (long name, we know) falls somewhere in the middle, setting itself apart with a focus on one particular dish – eel, obviously.

With plenty of options to choose from, we opted for the unagi kabayaki and beef set meal (RMB58), with a baked jumbo prawn (RMB28) and spicy clam (RMB18) on the side. Had the restaurant been called Kabayaki Spicy Clam, we’re confident they’d be out of business already – they were tolerable, but dreadfully over-sauced with a mediocre sweet-and-spicy flavor.

Fortunately, Kabayaki knows what they’re good at. The eel was, simply put, fantastic – eelicious, if you will. Perfectly grilled and lightly glazed with teriyaki, the restaurant’s namesake fully lived up to expectation. The lunch box also came with minced beef sauce (think Bolognese), broccoli and a scrambled egg, all over rice, making for a great little set. The jumbo shrimp, baked in a savory cheese sauce, was also a tasty snack, though the portion of meat was quite small for something with jumbo in the name. 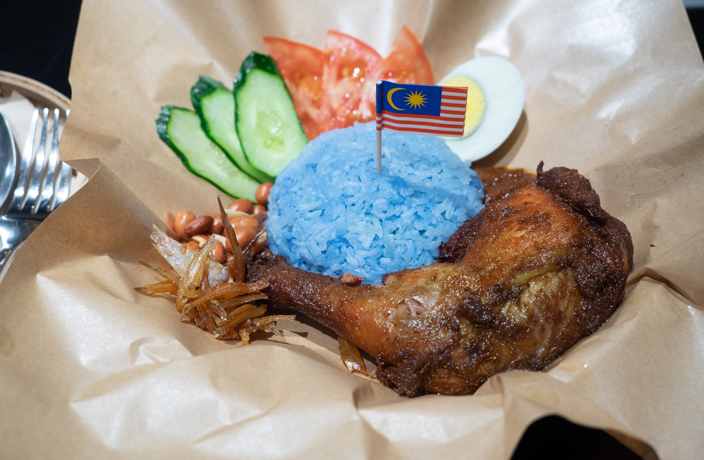 Image via Barnaby Lofton for That’s

It’s the laksa seafood meehoon (RMB38) here that draws eaters to Mamak. Regarded as one of Malaysia’s national foods, this rice noodle dish comes in a soup that’s simmered for hours with an array of spices and infused with coconut milk. In the words of a Malaysian friend, “Mamak’s laksa is what has been missing from the city’s Southeast Asian food scene.” Its rich and refreshing taste is the sole reason we would consider a return to this underground eatery.

On the flip side, avoid the nasi lemak (RMB32), which serves up a mixed bag of mushy coconut-flavored rice, peanuts, anchovies, sliced cucumbers and tomatoes with half a boiled egg. The taste is average, at best. Although the dish is visually appealing, the stale drumstick and sambal is a letdown in the taste department.

As for dessert, try the air batu campur (RMB24), ‘mixed ice cube,’ which is hailed as the Southeast Asian country’s national dessert: An ice-based bowl with red beans, herbal jellies, longans and sweet corn, topped with a scoop of ice cream. 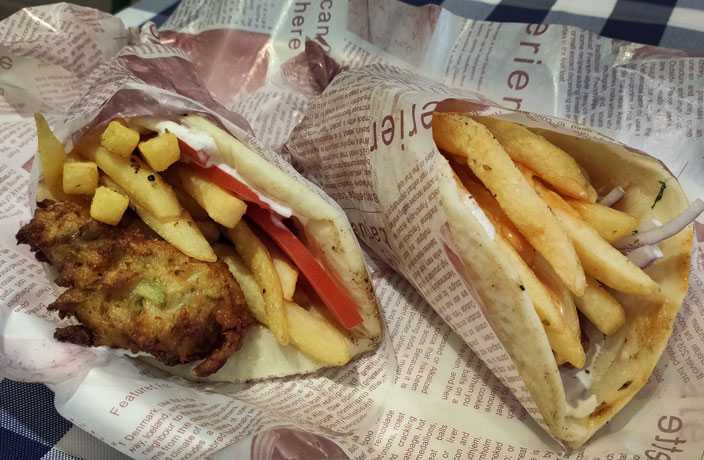 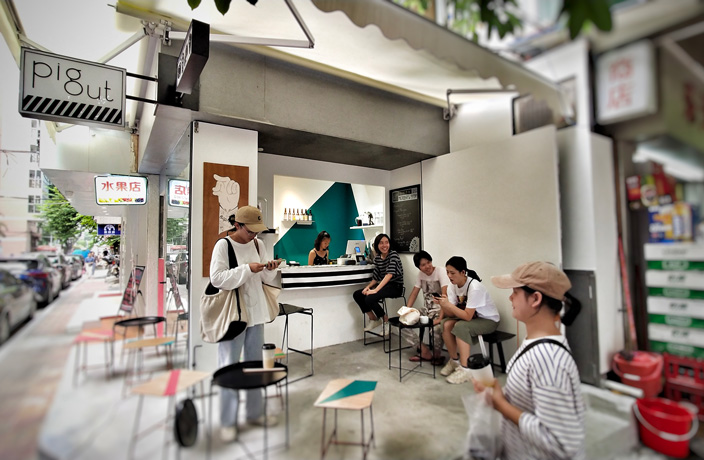 As a corner shop smack dab in the middle of Tianhe South, Pig Out is a neat hang out spot anytime between lunch and the restaurant’s closing time. 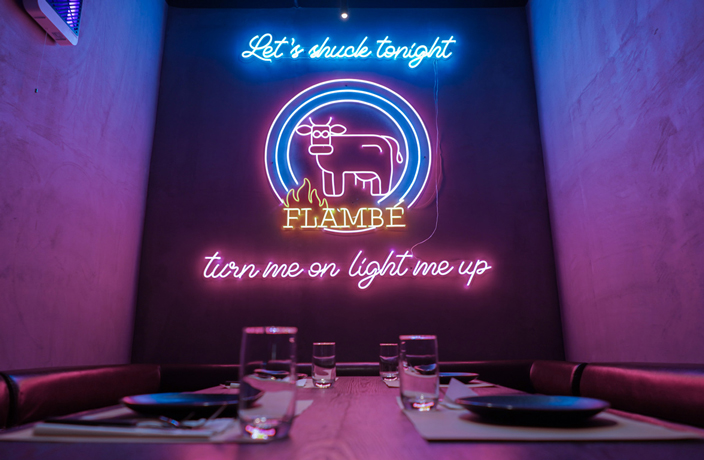 How can you go wrong with a name like that?