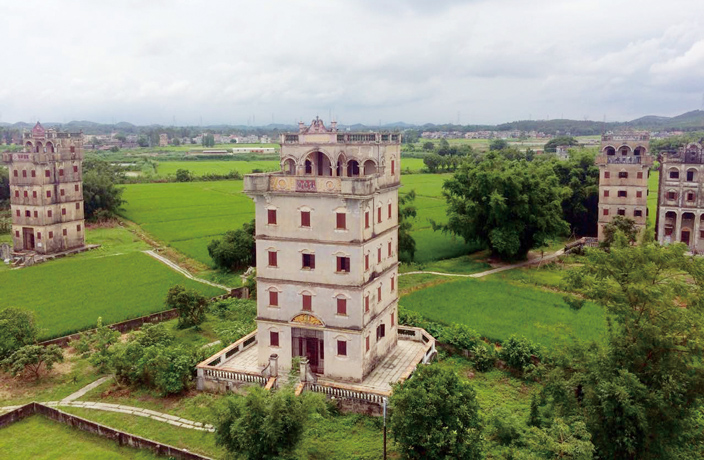 Let’s face it: compared to Beijing, the PRD doesn’t abound with famous historical or cultural sites. However, we are living near some of the most distinctively beautiful settlements in China, characterized by a melting pot of architectural designs: the Kaiping Diaolou and Villages, thus far Guangdong’s only UNESCO World Heritage Site.

The diaolou – fortified, multi-story residences made of concrete – came into being as a remedy to several societal ills. Kaiping, a small city located 130 kilometers southwest of Guangzhou, was in times past the victim of floods, rampant banditry and the devastating Punti-Hakka Clan Wars (an enduring conflict occurring at the end of Qing dynasty between the Cantonese-speaking natives and the migrant Hakka people that resulted in hundreds of thousands of deaths).

Combating these issues, diaolou served as watchtowers, shelters from flood and blockhouses against raiders. 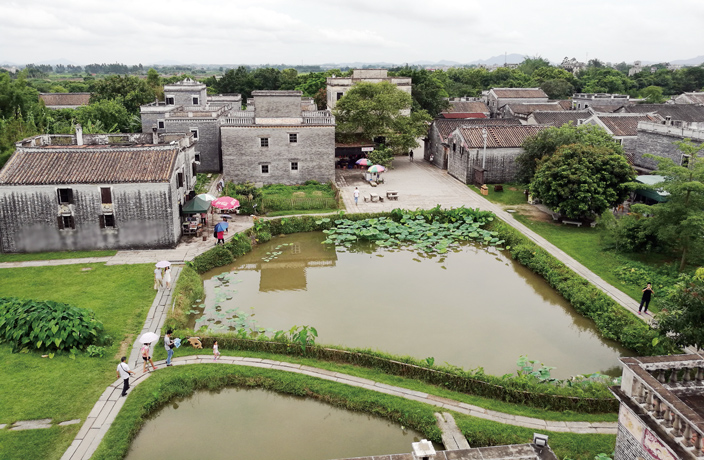 Kaiping is well known as the hometown of many of Guangdong’s overseas Chinese, who left for the US and Canada during those years of havoc at the end of the 19th century. The economic boom in North America allowed these immigrants to return to China with dollars in their pockets and build lavish houses. They modeled their homes on the multifunctional diaolou, while adding exotic elements picked up abroad.

Diaolou proliferated: according to the Kaiping town annals, a total of 1,648 watchtowers were erected across the small area from 1900 to 1931, reaching a peak in 1937 when war broke out between China and Japan. The year of 1949 saw the last watchtower built in Kaiping’s Chikan Town.

The diaolou are one-of-a-kind structures, dispersed among paddy fields and flaunting a melange of Chinese, Western and, in some cases, Islamic architecture. From their exteriors you can detect Roman domes, Greek porticos and Gothic windows, while most of the interior design retains southern Chinese flair. Famous watchtowers have been given names and usually boast a tablet inscription with their history, owners and significant events witnessed. 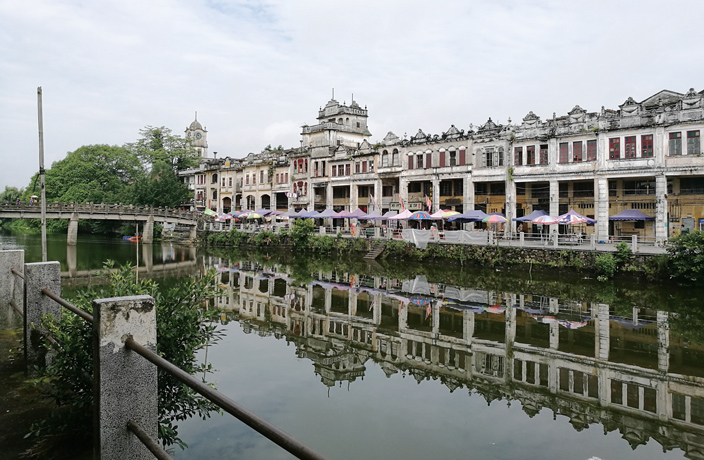 As scattered as they are, there are four major clusters of watchtowers: Zili, Jinjiangli, Sanmenli and Jianglong. Zili Village, with buildings overlooking verdant paddy fields, is the most popular with Chinese tourists, particularly as it is one of the settings for a well-known Chinese movie. Jinjiangli possesses fewer examples but also the tallest and most beautiful watchtower still standing.

Chikan, Kaiping’s previous downtown, is also a must-go destination. It preserves some of the most classic, stylish buildings constructed during the Republic of China and, as a result, serves as a popular film set.

With a total of 1,833 watchtowers extant, it’s hard to reach them all. One day is enough to visit some of Kaiping’s famous diaolou and villages, but if you are captivated by them and decide to stay over, the Diaomin Buluo Inn (碉民部落客栈), a popular hostel in Chikan situated across the river from the film set, is highly recommended.

Take the coach from Guangzhou Railway Bus Terminal or Tianhe Coach Terminal to Kaiping (RMB60), then take a local bus to one of the diaolou clusters (remember to tell the bus driver your destination). Tickets to the villages range from RMB50-80.