As a senior photography editor for well-known national media outlets like CBN Weekly, Shanghai-based Yanni Cai was in an enviable professional position. Yet in 2011 she left the career which she had so actively pursued for eight years and set foot into an arena that she never anticipated: cookery.

"After resigning, I spent most of the time at home. Eating gave me a big headache. I felt tired and a bit distressed at having to rotate from toast to delivery. But it’s also weird to eat alone in a restaurant,” says Cai.

It was this quandary that led Cai to seek help online. “I searched the Internet for videos to teach me how to cook, but I became really confused after watching them. Then I thought, why not film cooking videos myself?”

Cai soon put her idea into action, and her first effort was uploaded to Youku.com in November 2012. Lasting for only three minutes, the micro-film was the first episode of her Eat Alone series. In it, a friend of Cai’s cooks a household cold dish: pidan doufu (preserved eggs with tofu). Instead of the sizzling frying sounds and singsong narration you might experience on A Bite of China, the video has springy background music and gentle lighting. Subtitles on screen display ingredients’ names and simple cooking steps. Everything appears relaxed, calming and comfortable.

Since then, Cai has built up quite a collection of clips, uploading recipes on a weekly basis. Each episode features a person whipping up a common dish, like mapo doufu or clay pot rice. Before shooting, Cai usually dines with the home chefs, during which she learns about their backgrounds and notes down what touches her most about their lives. At the same time, she also decides upon what to make with them. No fancy foods are featured, as the program caters to people who can’t work wonders with a wok, but refuse to make do with instant meals or delivery. Those featured in the videos are neither professionally trained cooks nor highly sought-after celebrities. They are just average Joes. 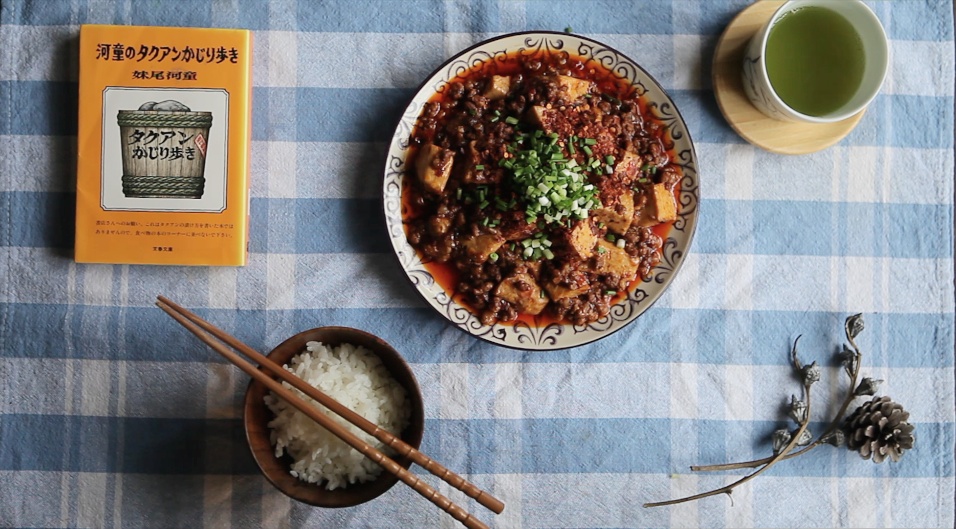 In Eat Alone, cooking is not just a process of turning raw foodstuffs into something edible, but a ritual. Comfortably dressed guests attend to their ingredients meticulously using aesthetically designed utensils.

“If you must know how I pick [people] to appear in the films, I would say they are people who pursue a better quality of life,” says Cai.

Conveying the message “eat well even when you eat alone,” Cai’s series has managed to capture people’s hearts, especially those living in urban areas. To date, there are already at least 40 Eat Alone episodes, which together have garnered more than nine million views on Youku.com. On Weibo, Eat Alone’s account has attracted over 400,000 followers.

Building on the web traffic, September 2014 saw Cai team up with journalist Zhang Aiqiu to transform her digital work into a print publication, telling the stories behind her three-minute videos. Suffice it to say, Eat Alone has become quite a success.

You may be wondering how many people are involved in this project. The answer is three: Cai herself, the cameraman and the guest chef. It usually takes one day to finish shooting, but three or four days of editing – though it can take as much as two weeks.

“Food is actually a carrier,” explains Cai. “It interprets the host’s character, represents their emotional experiences and brings out his or her attitude towards life. I hope to present the relationship between the food and the host through editing what has been filmed. As a result, I invest more time on post-production.” 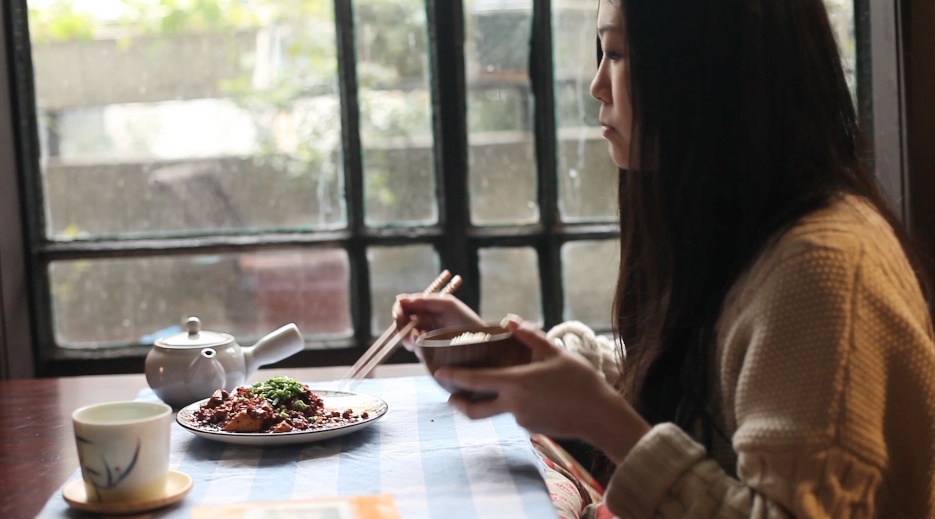 Response has not been universally positive. Cai has also received negative critiques about unconventional methods of cooking classic dishes. Dark mutterings accompanied episode 27, for instance, when instead of using traditional sweet sesame stuffing to make tangyuan (汤圆, a rice dumpling that often serves a ceremonial purpose), chocolate was substituted. Netizens also deplored the inauthentic Sichuan style of the noodles in episode 16.

“There are a thousand hamlets in a thousand people’s eyes. Similarly, cooking methods are not limited to just one. Why not have a curious mind and embrace the surprises life gives to you?” says Cai, who, according to her ex-colleagues, has become softer and more human since starting Eat Alone.

Some people perceive Cai’s series as a band-aid for lonely hearts, but she points out that not every host in the film is single. Some are in stable relationships, others are married. She sees her videos as more about being comfortable enjoying those solitary moments.

“Loneliness can be easily wiped out if you have a clear goal towards the life you desire most,” she says. “Being alone is not equivalent to feeling lonely.” A taste of New York.

Lychee harvest season is upon us, now get creative and wow your next dinner guests.

Sure, Canadians are passionate about hockey and Tim Horton’s, but a lesser known obsession is with butter tarts.

Don’t let rising temperatures keep you from enjoying this lush and lovely soup; it’s nice to have options when the darned weather can’t make up its mind.

If any dessert could be described as blowsy, it’s the lemon meringue tart. It’s the overblown dolly of desserts, the bouffant, billowy peaks of white above a core sourness, yet irresistible enough to put young Jolene right off her game.

Fried rice is a bellwether for the quality of a restaurant: if the kitchen gets their fried rice right, they probably have pretty solid skills.