There have been a number of Walmart closures in the Southwestern United States over the past few months - not usually something to remark upon, unless you thought they were about to be converted into Chinese military bases used by communists and the Obamas to steal all of America's guns.

The great American state of Texas has been going through a weird patch lately. The US military is planning a large training exercise to take place in the state and its neighbors over the summer, called Jade Helm 15. This has sparked off a number of conspiracy theories, each more salacious than the last, about the "training exercise" actually being an attempt by the American government to occupy Texas under martial law. These theories would usually remain confined to the weird subreddits from whence they came, yet Jade Helm conspiracies have managed to gain some remarkably mainstream traction.

As Vox reports, "Texas Republican politicians have been curiously reluctant to actually say that the US isn't attempting a military takeover of Texas." Curious indeed.

There are a number of different Jade Helm conspiracy theories floating around on the web, and our personal favorite involves the Chinese takeover of America via Walmart.

The closed Walmart stores will "soon be used as 'food distribution centers' and [will] house the headquarters of invading troops from China, here to disarm Americans as promised by Michelle Obama to the Chinese prior to Obama leaving the White House," according to All News Pipeline.

We were unable to find any evidence of Michelle Obama's promise "to the Chinese," but All News Pipeline presumably has its sources (and/or paranoid fantasies).

Pipeline also mentions that "China has DEMANDED Americans be disarmed," (emphasis theirs) and then links to an article on the extraordinarily-far-right blog Brietbart, which summarizes a Xinhua op-ed, in which the author - or as Brietbart calls him, "The Chinese Government" - encouraged the US government to adopt gun control. 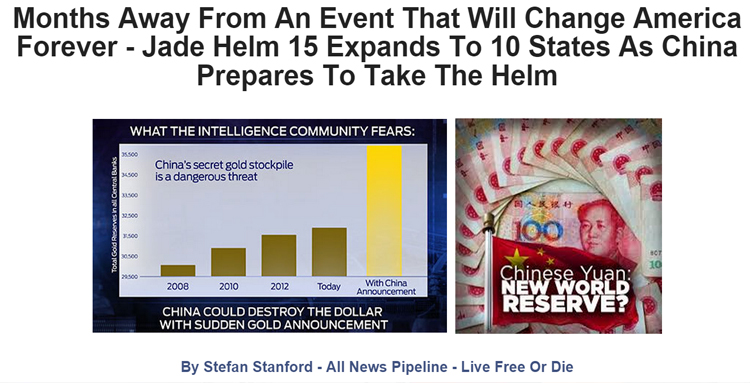 But why China? A number of other conspiracy sites believe that Jade Helm is actually a mask for a Russian takeover, while yet more think that it's all a crafty plan for ISIS to invade from Mexico.

Enter OnPointPreparedness.net. In an article flanked by banner advertisements for "Emergency Freeze-dry Meals" and handguns sold from "Patriot Outfitters," the website breaks it down for us:

Names are always chosen carefully, and this one might be insightful.  Jade is typically associated with China.  Helm symbolizes a turning point or control.  15 could signal the year (2015) of the operation.

It's hard to argue with that logic. The article continues, mentioning that China's newly-formed Asian Infrastructure Bank and the fact that "China has been buying massive amounts of gold" are all signs that the Middle Kingdom is surely in on the conspiracy.

A number of other websites have mimicked On Point Preparedness' rationale: "Jade" is a China thing, therefore China is about to invade the United States.

How would Chinese troops get to the US? Fear not (well, actually, fear a lot), says JoeForAmerica.com, the official website of - we kid you not - Joe The Plumber. Joe states that "Chinese and Russian (with a smattering of eastern Euro forces) troops have been embedded within US territory for a few years, at the behest of the Traitor-in-Chief!" [i.e. Obama.]

So to recap: Walmarts are closing and the US military is planning a training session. Take those two facts, swish them around inside the cavity-addled mouth of American conspiracy websites and spit them back out: you've got a Chinese/Russian/ISIS trifecta who are invading and/or already in the US, ready to steal Joe the Plumber's gun, impose martial law and fulfill Michelle Obama (wife of the Traitor-in-Chief)'s promise to China.

There is a lot to unpack there, but you'll have plenty of time to do it after your Texan town gets converted into a communist anti-gun hellhole. A 33-year-old man, Zhong Xiong, has pleaded guilty to charges of fraud for a jade scam on in Kunming, Yunan, after cheating hundreds out of RMB1 billion.

A guide to the craziest flight MH370 conspiracy theories

New satellite images may or may not show wreckage from missing flight MH370, but even if remnants of the plane are found, we likely won't find out just what happened for weeks, potentially years.

Despite fears that China's moon rover would be unable to wake up after the long lunar night, Yutu is up and ready to roam once again.

We weren't the only ones who found Jade Rabbit's final message to humanity to be heartbreaking, so did Jon Stewart and the Daily Show, who enlisted Sir Patrick Stewart to give the little robot's words the proper gravitas.

China's first lunar rover, the Yutu or 'Jade Rabbit', separated from its parent craft in the early hours of Sunday morning, after the Chang'e-3 probe successfully soft landed on the moon on December 14.